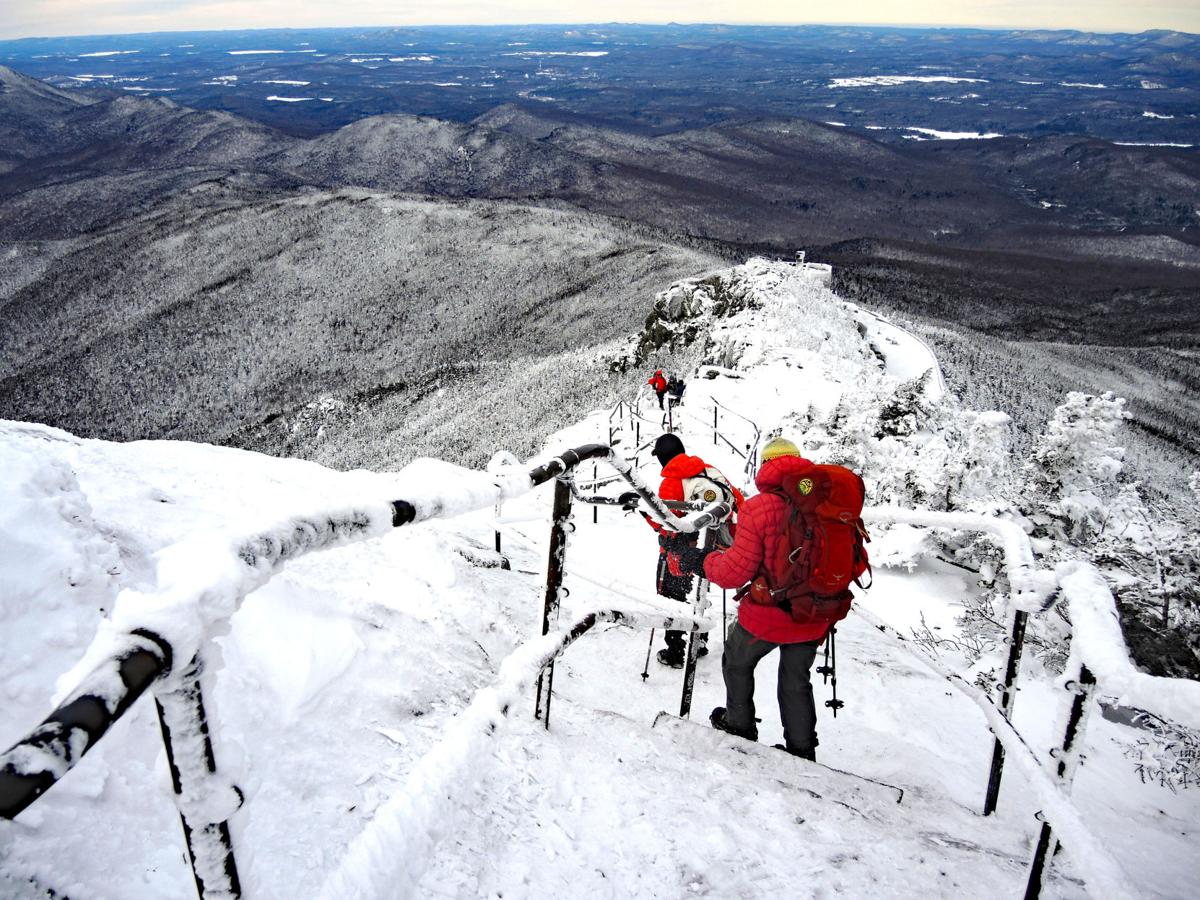 Wendy Patunofff (front) leads the way as Sue Coonrod carefully descends the ice-covered steps from the summit of Whiteface Mountain. 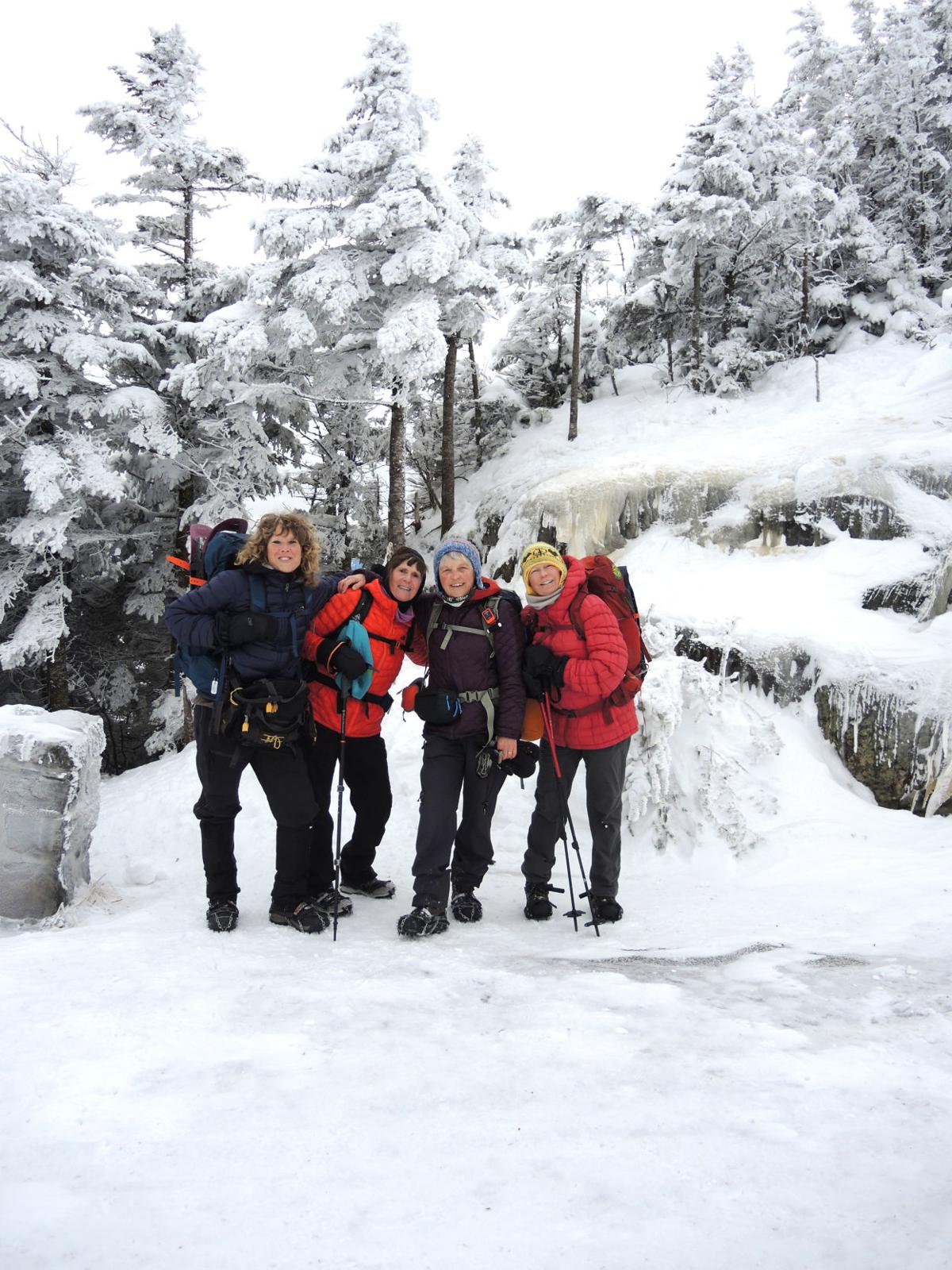 Kelly Moody (from left), Wendy Patunoff, Joanne Kennedy and Sue Coonrod pose for a group shot enroute to the summit of Whiteface Mountain.

Wendy Patunofff (front) leads the way as Sue Coonrod carefully descends the ice-covered steps from the summit of Whiteface Mountain.

Kelly Moody (from left), Wendy Patunoff, Joanne Kennedy and Sue Coonrod pose for a group shot enroute to the summit of Whiteface Mountain.

On December 21, I was excited to celebrate the winter solstice.

I hesitate to write “celebrate” as I’ve discovered that not everyone in the North Country would use celebrate and winter in the same sentence.

Just what is a solstice?

The Encyclopedia Britannica describes the Northern Hemisphere winter solstice as a time when the path of the sun in the sky is farthest south, usually December 21 or 22.

At the winter solstice, the sun travels the shortest path through the sky and that day therefore has the least daylight and the longest night.

In the Adirondack hiking community, the winter solstice has a special meaning.

This is the start of the days that you can hike a High Peak and it will count on their list of hiking all 46 High Peaks in the winter months.

This is a feat not for the faint of heart.

With all of us wanting to begin to get in better shape for winter hiking, my friends Kelly Moody, Sue Coonrod and Wendy Patunoff decided to hike Whiteface on the Memorial Highway. Sue wanted to sharpen her skiing techniques so she would be skiing up while the rest of us would use our snowshoes.

Our group of 4 are all early risers, so we were not surprised to be the only ones at the start. The sunrise was beautiful as we hoisted our packs on our backs and began our day.

I would like to say that we hit the road running, but that would be a lie. Our packs were stuffed with everything we would need on any winter hike — thus, it felt like they were filled with rocks.

The winter season is a whole different animal to hike.

When I load my pack, I keep in mind what I would need to survive the cold if I got injured and had to spend an unplanned night in the cold.

The list is long and I’ve written about what I bring before so I won’t go into detail. I do always carry down jacket, pants and mittens plus an extra set of clothes in case of an unplanned dip in icy water or some other emergency.

I also carry a Garmin inReach Mini which is a lightweight satellite messaging device. This Garmin gives me the ability to trigger an SOS signal to an emergency search and rescue network in a life threatening emergency.

It also provides the ability to send location/tracking and SMS messages to family and friends giving them peace of mind if I’m going to be hours late.

Now, back to the hike. As we traversed the road, we soon realized that we really did not need snowshoes but it was a good day to get used to lifting a couple of pounds of metal on our feet.

The temperature was in the teens, but the cold air was refreshing as we walked each at our own pace. There was plenty of stopping to adjust our packs, take off layers or mess around with bindings but that was what the day was all about. Hopefully, we would get out all the kinks for future adventures.

There were no treacherous icy slopes to navigate or deep snow to track out, but there definitely were spectacular views and ice flows on the side of the road. We walked for hours just chatting and drinking and eating, taking in the beautiful wonders of nature.

Arriving at the spot where the hiking trail hits the road we decided to ascend the final portion of the hike using the trail.

This spot is usually tricky but today it was more so, appearing to be a rock solid ice flow. Kelly tried getting up with her long legs and a whippet (a ski pole with an ice pick-like attachment).

The whippet was no match for this ice so a unanamious decision was made to continue on the road.

The decision would prove to be a good one as it was like a frozen winter wonderland with beautiful icy formations on one side and magnificent mountainous views on the other.

Poor Sue and Wendy, always waiting for Kelly and me way back in the distance shooting photo after photo.

At one point, after hundreds of photos I said to Kelly, “Okay, this is the last photo till the summit, agreed?” We both laughed knowing that would not be the case.

Upon arriving at the parking structure, three of us replaced our footwear with microspikes and Sue with crampons as we headed up the ice covered stairs to the castle.

The railing was coated with delicate swirly patterns of hoarfrost making it hard to get a good grip.

With each step we carefully planted our feet as we slowly approached the summit.

Once on top, it was surprising that the summit wind was not too bad and we could find shelter on one side to enjoy our lunch.

The views were outstanding, with layers of peaks stretched out before us and Lake Placid, a recognizable landmark down below.

We didn’t linger long as we had some miles to go retracing out route.

The stairs were a little trickier descending but soon we were back at our snowshoes and ready to head down. By this time, hikers were coming up as we stopped to chat with a few.

The return trip was uneventful, but it was such a peaceful way to spend the afternoon. Seven hours later, we were all happy to reach a sign indicating ½ mile to the toll booth.

It had been a great day, as some of the group had added to their ‘winter list’, Sue improved her skiing technique, the scenery was wonderful and we were all back to our vehicles in one piece.

A YEAR OF ADVENTURES

This hike marks my last hike in 2019 and I feel very lucky to have my whole family together to celebrate Christmas.

I want to wish everyone peace and happiness this holiday season and all the best in 2020. Until next year - Happy Trails.

Peru resident Joanne Kennedy is a photographer and writer who can be found exploring the many lakes and mountains in the Adirondacks or other wilderness areas. She enjoys sharing the unique places she visits in the natural world with her readers. Reach her at loonsrcool@gmail.com