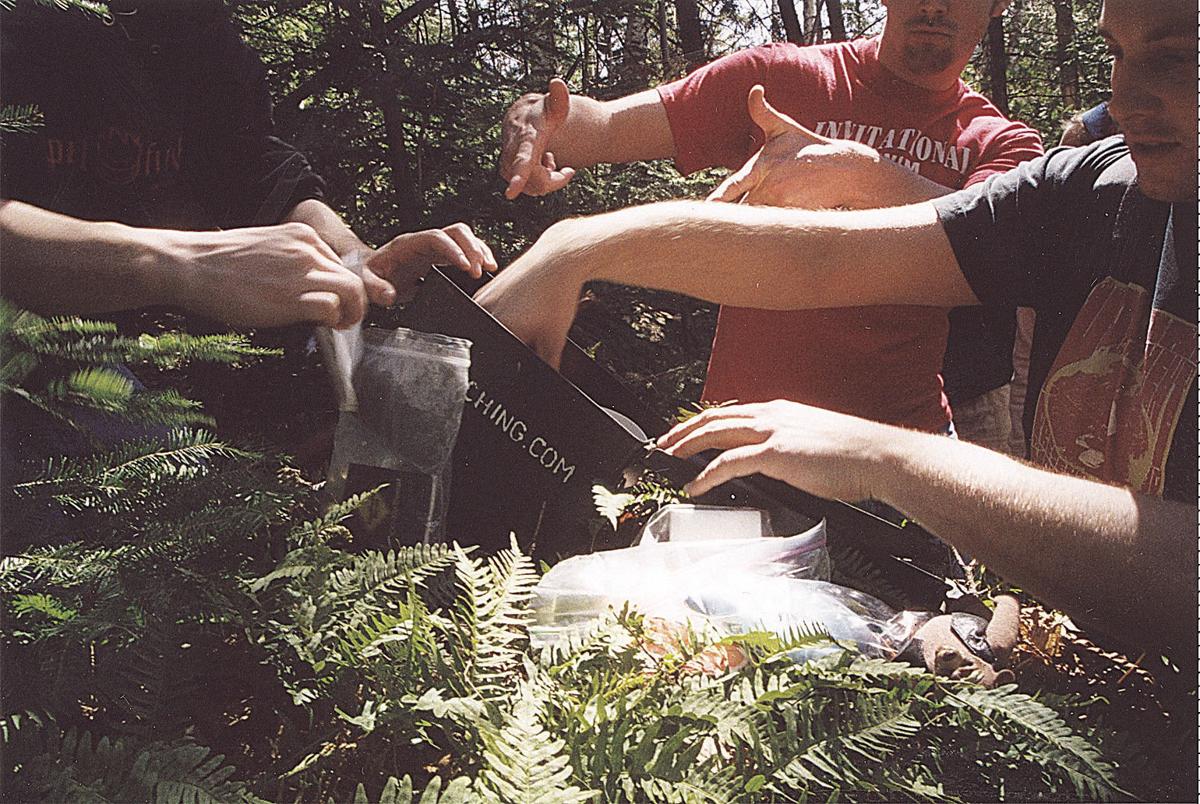 Everyone wants to get at the allusive cache at Copperas Pond 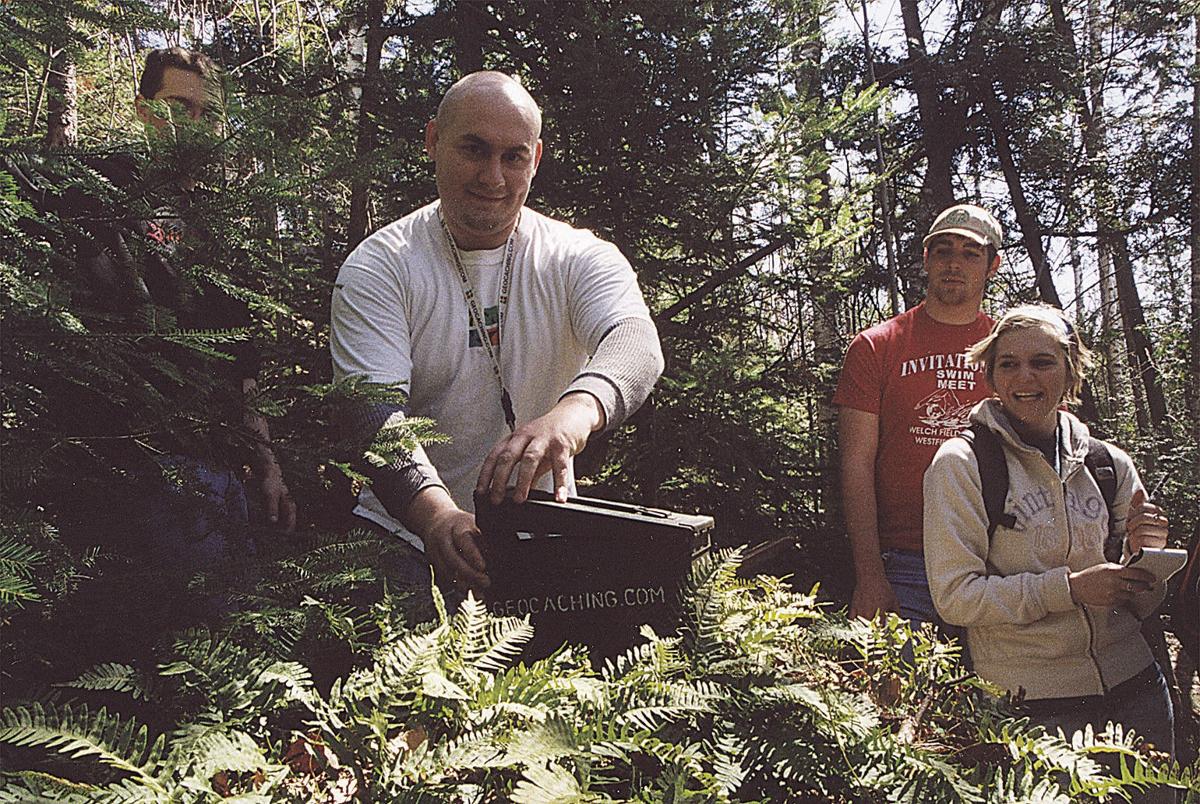 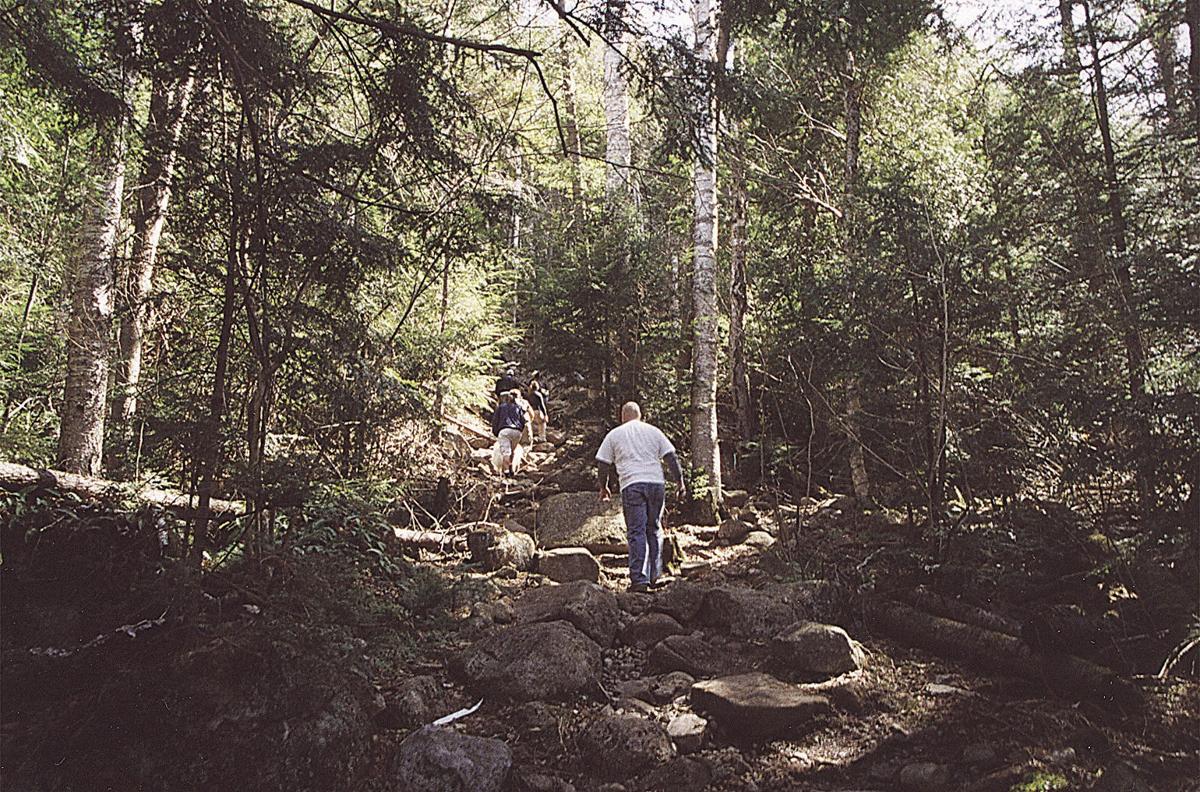 Everyone wants to get at the allusive cache at Copperas Pond

We are at 44 degrees 19.863' north, 073 degrees 53.857' west -- in other words, we are near the shore of Copperas Pond in Wilmington Notch, looking for an army ammo can filled with low-cost trinkets. It's called geocaching and we are in search of the Copperas Cache, an illusive container I tried to find three years ago while I was on assignment for Adirondack Life magazine. Exact coordinates are essential to geocaching, but they didn't help me back then. This time there are nine of us, seven Plattsburgh State Expeditionary Studies students, me and Alex Jess from Plattsburgh, our leader. Alex, a car salesman with Bill McBride Subaru, is into geocaching big-time. We fan out, guided by the clue on the Copperas Web site entry that we deciphered. It said the cache could be found 100 feet from where the trail met the pond and behind a big boulder covered with ferns. The problem is there are a lot of big boulders with ferns. Alex checks his GPS, a Magellan Explorist 500, and, although the tree canopy is a bit thick and sometimes interrupts the signals, he thinks he has a fix on the cache. All of a sudden from 60 feet ahead of him, Seth, one of the students, yells, "I found it!" We all rush to the discovery. There we find a typical cache, Alex tells us, a waterproof army ammo can with trinkets inside -- a small stuffed animal, other inexpensive paraphernalia shoved in, plus a notepad for us to sign in to show we found the cache. Like all geocachers, we use fake names to sign in; mine is Orion. We discover the cache was created in 2002, and that time span is reflective of geocaching worldwide. It is a new outdoor activity, only founded in 2000, and relies on the modern technology of GPS units and the Internet to pursue an age-old activity -- searching for treasure in the wilds. Alex, who has located 138 caches, says, "When the military stopped scrambling the satellite signals for security reasons, our GPS readings became more precise, and geocaching took off." There are now caches all over the world, ranging from the normal hidden containers to a "virtual" cache where there is no container; you just locate the spot and photograph yourself there. Alex tells us that the Macdonough Monument in Plattsburgh is a virtual geocache. Locally, there are caches on the old Air Force Base and off Exit 34 of the Northway near Keeseville. I found one for that Adirondack Life article near Middle Saranac Lake. All you need to do is go to the Web site www.geocaching.com, punch in the zip code of the area you want to search, and hit enter. "It makes for a nice diversion on a long car trip," Alex says. "When I drive from Washington, D.C. to Plattsburgh, I often stop at rest areas near where there are caches. It breaks up the long drive." One of the most challenging of these caching quests is the "Adirondack Murder Mystery," which includes 20 caches at 20 different locations, each with a clue. The 21st cache is where you solve the mystery and find a fake dead body. Some geocaching fanatics like Alex bring specially made coins along to deposit at a cache, and take one away if there is a coin already there. There are also "travel bugs" that geocachers take from one cache to the next. One of these has traveled five continents so far. With all these hidden caches in the backwoods, a few critics have called it trash dumping, but as far as Alex knows, no one has been arrested for hiding or finding a cache in the Adirondacks. After all, what is state land for? -- Public use, of course. Even with 10 satellites hovering over the Adirondacks, there is no guarantee of a clear signal due to tree cover or atmospheric conditions; most of the time there are enough satellites to get a read, but taking along a map and compass is a good idea just in case one of these battery-dependent GPS units goes dead. Now that we've found the Copperas Cache, I ask Alex Jess the inevitable question: How many caches do we have to find to get a patch, medal, certificate or award, just like those people who go up the 46 highest peaks. "Unfortunately, there are no trophies," Alex says, "but there is one big reward." "What's that?" I ask. "I've lost 15 pounds since I started geocaching," he responds proudly. daprill2000@yahoo.com

ROUSES POINT [mdash] Jamie S. Smith, 41, of Rouses Point, passed away Sunday, Sept. 19, 2021, at the UVM Health Network at CVPH. She was born Nov. 27, 1979, in Plattsburgh, the daughter of Roy Smith Jr. and Sherrin (Coulombe) Smith. She enjoyed find-a-word puzzles, adult coloring books and b…