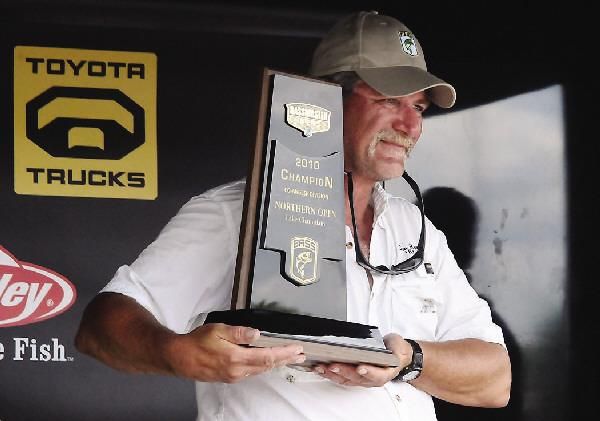 Tom Rizzo of Rochester, Pa., holds up his prize as the top Co-Angler in the Bassmaster Northern Open on Lake Champlain. 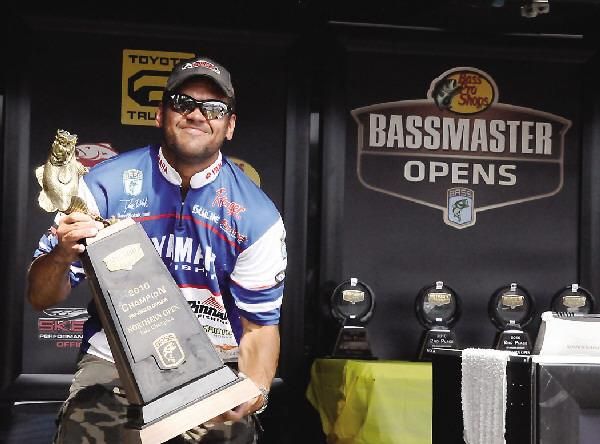 Tom Rizzo of Rochester, Pa., holds up his prize as the top Co-Angler in the Bassmaster Northern Open on Lake Champlain.

"This tournament means more to me than anything in my career," said Wolak, a Bassmaster Elite Series pro. "More than the Rookie of the Year or the Bassmaster Major that I won. This lake has a sense of purity about it, and when you come up here you really have to find the fish first. You have to make changes navigationally and strategically.

"I came up here planning to fish for largemouth thinking that's what was going to win it, but I started fishing for smallies early on. I made a critical move on Friday because the north wind made me fish shallow. I found a grass mat and whacked 'em. That wind tucked the fish up under there."

Wolak flipped a Fin-Tech Title Shot jig tipped with a YUM Craw Papi into grass to land most of his fish. He took home the top prize of more than $51,000 as well as the lead in the Northern Opens points race. After the three-tournament Northern Opens season, the top two anglers will receive a berth in the 2011 Bassmaster Classic in New Orleans.

Wolak already punched his ticket to the 2011 Classic via the Elite Series so the first angler out of the Classic cutline — Jared Lintner — would benefit if Wolak were to hold.

Said of Wixom, Mich., took runner-up with his 19-1 limit Saturday. That brought his three-day total to 53-0 but the late charge ended up falling just short. Every one of Said's fish fell for a Poor Boy's Bait Co. football jig in water up to 16 feet deep. He concentrated on rock piles.

"I'm thrilled to have gotten second in a field that had so many pros in it," he said. "I lost a good fish — about 4 pounds or so — on the first day, and I'm not saying that was the difference, but I guess I'll never know."

In third place was Tracy Adams of Wilkesboro, N.C. He added 17-15 Saturday for a three-day total of 52-4. Behind him was Elite Series pro Ish Monroe of Hughson, Calif., who fell two spots after only bringing 14-4 to the scales the final day. His total was 52-0. Rounding out the top five was Mike Haggerty of Hendersonville, Tenn., whose three-day total is 51-15.

On the co-angler side, Thomas Rizzo of Rochester, Pa., took top honors. With the victory, he earned a brand new Triton/Mercury rig valued at $44,000 with a three-day total of 30-12. He credits knowledge of the lake, good pros, and preparedness for his success.

In second place was Phillip Jarabeck of Virginia, whose total weight is 30-6. In third was James Schneider of Menands, who built 30-2 over three days.

The next stop of the 2010 Bassmaster Northern Opens presented by Bass Pro Shops is at the Detroit River, Aug. 19-21, out of Detroit, Mich., and the final event will be at Chesapeake Bay out of Cecil County, Md., for the Sept. 16-18.