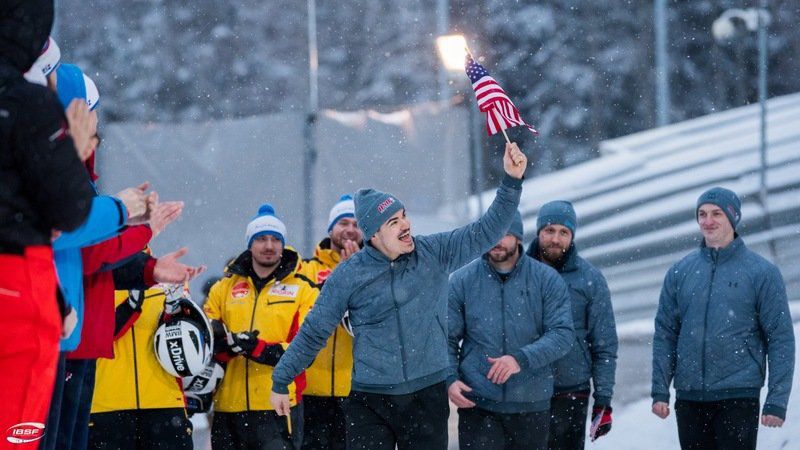 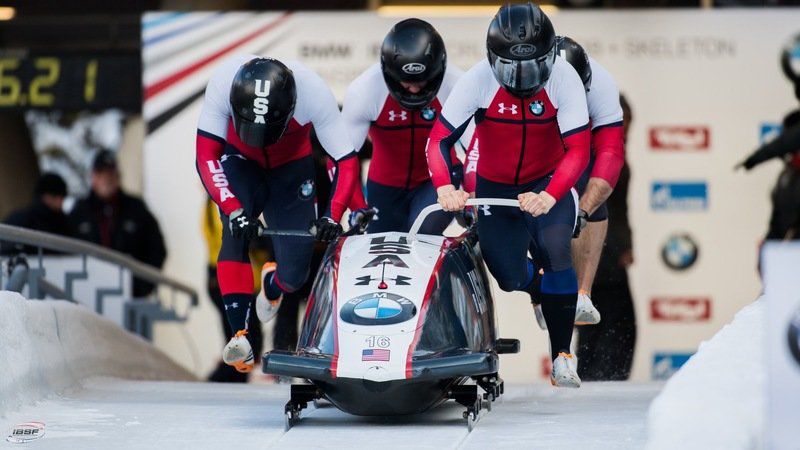 IBSF/Photos The USA bobsled team pushes their sled to a third-place finish in Innsbruck, Austria.

IBSF/Photos The USA bobsled team pushes their sled to a third-place finish in Innsbruck, Austria.

PLATTSBURGH — He may be a small town guy from Cadyville but his impact on the region has been anything but.

Hunter Church is turning heads on the World Cup Bobsled tour this season, recently nabbing a bronze medal in Austria as part of the U.S. team.

“It was a pretty emotional day to say the least,” Church said.

“It was my first World Cup top-three finish in my career so far, and of course being on a track that I’ve never been on was pretty huge too. The guys that I have been sledding with have been so awesome, they pushed so well (that day) and it’s a pretty great honor to be in that next generation of men who are bringing medals to the program.”

Church was first introduced to bobsledding back when he was only seven years old and his father, Tom Church, had taken him to the Lake Placid training center to watch the bobsled run.

His father and great uncle competed in the sport in the 1980s. Little did Tom know that his son would be fully invested in the sport for the next 14 years and go on to compete professionally for the U.S.

At 12-years old, Church started driving sleds in the Junior Bobsled Program. One interesting factoid is that Church has been a driver of the sleds since he began which is rare in a sport like bobsledding.

“I was one of those rare cases where I started driving from a young age and I pretty much just drove right on through,” he said.

“I've taken trips as a brakeman and I've done a couple smaller races as a push athlete in the four-man sled.”

He continued bobsledding throughout high school for recreation, but started competing internationally not too soon after he graduated. He transferred to the National Sports Academy in Lake Placid so he could focus on full-time training in the sport.

“Once I left high school, I wanted to see how far I could push this,” he said.

“I really loved what I did and wanted to see what would happen if I focused on it completely.”

Church's USA teammates include Josh Williamson, James Reed, Kris Horn and Kyle Wilcox. Originally from Orlando, Fla., Williamson is a former NCAA Division One lacrosse player that came into the sport in 2018.

Horn is a decathlete out of the University of Massachusetts, and Wilcox is a former football player from Penn University. Both athletes joined the sport last year.

Reed was a push-athlete with the late Steve Holcomb, and has been involved in the sport since 2014.

“Everyone shares the load, it's not one person that takes it on,” Church said.

“The goal before we started was to get top 15 finishes in two-man and maybe some top 10 finishes in four-man, and we’re already hammering down those goals. Hopefully we can keep that trend going.”

Preparation for a race begins well before the start. An hour before the race, a jury inspects the sleds to make sure that there is nothing illegal or suspicious.

“We try to time it perfectly so that when we warm up we can get in right when our start time is for our first heat,” Church said.

“When we get to the line, either two or four people push the sled 15 meters as fast as we possibly can and then we all load in. My job for the next mile or so of ice is guiding the sled down while making as few mistakes as possible and just try to use physics to my advantage and gain speed all the way.”

The lowest combined down time between two heats will win the race.

As a high-speed and potentially dangerous sport, bobsledding requires athletes to overcome any mental blocks and push through on their toughest days.

“I think that for anybody it’s really easy to get into your head and let self-doubt creep in, especially when you’re hurling yourself off the top of a mountain,” Church said.

“If you make a fraction of an inch or steer the wrong way, it’ll cost you not only the race but it could cost you a trip down on your head rather than on your runners.”

Mentally, the Cadyville bobsledder is staying focused on his goals.

“I think we all want to come out and prove something at the end of the day too,” Church said.

For Church, the high-speed adrenaline rush is his favorite part about the sport. While he enjoys the energy he receives from the crowd as well as his teammates on the line, to him there is nothing more exciting than racing at 90 miles per hour.

Once the athletes go from a full-blown sprint to jumping into the sled, they have to quickly readjust themselves to finding the head space that will allow them to focus and be able to thread a needle through a pinhole, so to say.

Church has been able to dominate this part of the sport as he enjoys the clarity that comes from finding that head space during the race.

“It’s a different experience than people my age get to go through and I think I’ve learned a lot more than if I was just going to school right now,” he said.

“I’m getting a lot of different life experiences.”

Although Church has been practicing since he was a child, he never thought he would become a professional bobsledder. While he enjoyed participating in track and wrestling in high school, he knew that bobsledding was something that he could really hold on to.

He wants to go as far as he can in the sport.

“It’s cool that I’m on the World Cup and at the moment I’m on USA bobsled, but until I’m at the Olympic games standing on a podium, I do not think I will be satisfied,” he said.

“Even if I’m on the podium, if it’s not gold I’m probably still going to be upset. You can always contemplate striving higher and I guess that’s kind of how I ended up in this position.”

Church owes much of his success to his supporters, teammates, friends and family. He believes that the core group of his family has been monumental in getting him where he is today.

“I think out of all of them my dad is the biggest supporter that I have had, he's been almost like a team manager at times,” Church said.

“He's managed from afar when I've been in countries other than the United States and a lot of the former sliders in the community have been a huge help to me as well.”

Church has embraced the bobsledding culture, which is huge in Europe.

“Bobsled has definitely been a life saver and has changed who I am as a person and I think it’s only made me better.”

The next stop on the World Cup tour is Königssee, Germany on Jan. 25 and 26.

Streaming for the races can be seen through the Olympic Channel, NBC Sports and the International Bobsleigh and Skeleton Federation's YouTube page.

Church is excited to see what the rest of the tour has to offer and looks forward to seeing what else the USA team can accomplish.

"It's all for the North Country,” he said.

EULESS [mdash] Genevieve Huchro Haley (Gena) passed away peacefully on March 27, 2020 at her home in Euless, TX where she resided for the past 10 years with her eldest son George William Haley Jr. as she battled Alzheimer's disease. Gena was born October 1,1925 in Mineville, NY to Martin and…

PLATTSBURGH [mdash] Lorraine Hart, 92, of Wolf Way, passed away Tuesday, March 31, 2020 at CVPH Medical Center in Plattsburgh. She was born in Plattsburgh on September 1, 1927 the daughter of Heman and Rose (Mitchell) LaValley. Lorraine married Earl Hart at St. Peter's Church in 1946. She wo…