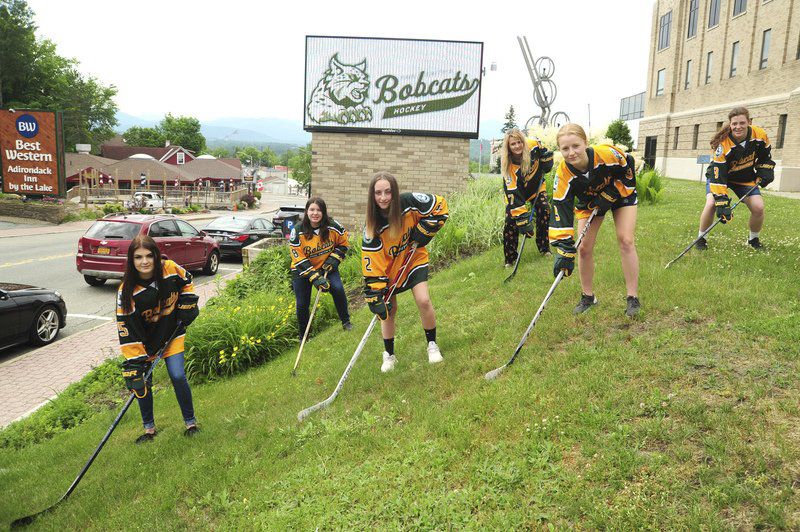 JACK LADUKE/P-R PHOTO(Front row, left to right) Diana Jones, Ireland Preston and Anna Thrasher, along with (back row, left to right) Anna Ackerman, Izzy Hays and Michaela Powers pose for a group photo with their hockey sticks following a signing day ceremony for the Paul Smith's women's hockey team outside the Olympic Center in Lake Placid. 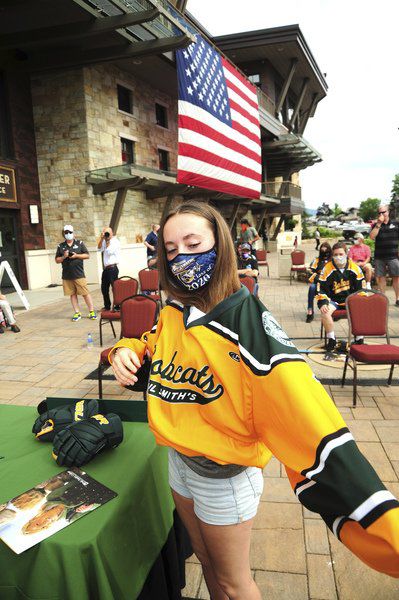 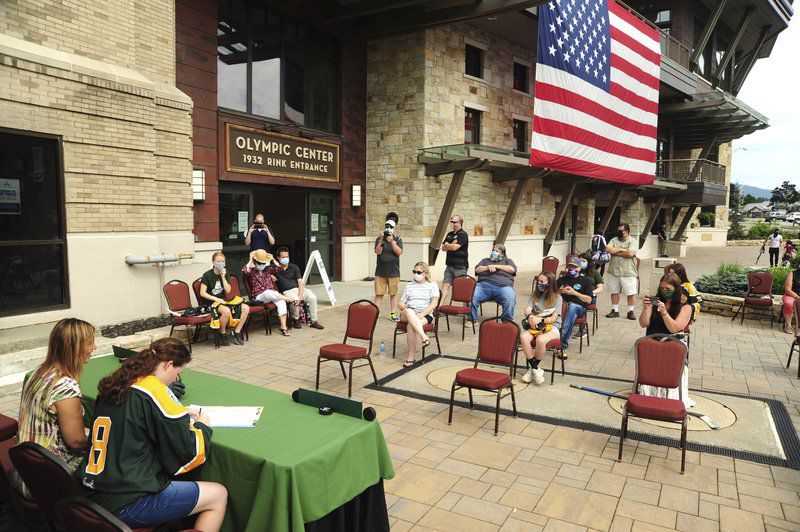 JACK LADUKE/P-R PHOTOMichaela Powers (8) signs her letter of intent to play for Paul Smith's women's hockey with a socially distant crowd looking on. 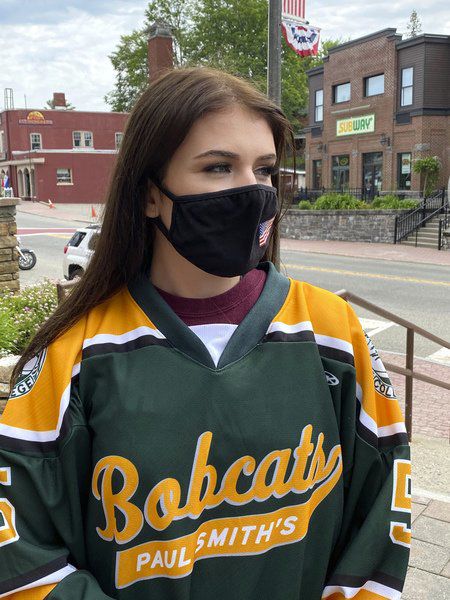 JOE LOTEMPLIO/STAFF PHOTODiana Jones was one of the five new recruits who attended the event.

JACK LADUKE/P-R PHOTO(Front row, left to right) Diana Jones, Ireland Preston and Anna Thrasher, along with (back row, left to right) Anna Ackerman, Izzy Hays and Michaela Powers pose for a group photo with their hockey sticks following a signing day ceremony for the Paul Smith's women's hockey team outside the Olympic Center in Lake Placid.

JACK LADUKE/P-R PHOTOMichaela Powers (8) signs her letter of intent to play for Paul Smith's women's hockey with a socially distant crowd looking on.

JOE LOTEMPLIO/STAFF PHOTODiana Jones was one of the five new recruits who attended the event.

LAKE PLACID — The COVID-19 pandemic did not get in the way of a special moment for a select group of players committing to the Paul Smith's women's hockey team Thursday in Lake Placid.

Outside the Olympic Center, Paul Smith's held a signing day ceremony for new recruits set to join the Bobcats.

Five of the 11 newcomers took part in the event, while the other six were unable to attend due to travel complications.

"There's a great buzz here," said Casey Gerrish from the Olympic Center steps after all commits officially signed to become members of the team.

Gerrish is gearing up for his second season at the helm of Paul Smith's, which finished 9-4 in its inaugural season in the Presidential Division of the Independent Women's Club Hockey League.

“This experience of the signing day has been unique,” Gerrish said. “You can feel the atmosphere here. Everyone is having a great time, and this is one of these moments that reinforces why I love coaching here.”

'I AM REALLY EXCITED'

Anna Thrasher (Leonia, N.J.), who played for the Bobcats last year and will be back with the team this season, was also at the signing day.

"Last year was amazing with just the team experience," Thrasher said. "Casey is the best coach I have ever had. Our environment and having this facility is great. All we focused on is hockey, and I know all these newcomers are going to be great for our team."

"When Casey reached out to me, I already had a couple colleges in mind, but I had not committed to anything," Jones said.

"I actually looked into Paul Smith's, and he talked to me about their hockey record and was telling me about how they are doing really well considering how they are a startup program."

Jones arrived in the North Country for the first time Monday and has enjoyed her visit, taking advantage of various scenery the Adirondack region offers.

"I am really excited to play, and I have been really enjoying getting to know the town I am going to be living in for four years," Jones said.

With spaced out chairs to promote social distancing facing toward a Paul Smith's College backdrop, various recruits, one by one at a table, signed their letters of intent with loved ones by their sides to play for the Bobcats.

"It was kind of scary because I did not know what to do," Jones said with a laugh. "Do I smile? Do I look? Who knows? It was very cool."

Many felt the excitement the day provided, including Preston, a standout on the Saranac Lake Placid girls hockey team.

Electing to continue her education and hockey career at home was an easy decision.

"It was very exciting to sign," Preston said. "I was like, 'Wow, I am playing for Paul Smith's now.' It was great.

"I chose this over anything. When I found out I could play hockey here, I thought this was great."

The Bobcats won their inaugural game last October with a dominant 17-0 win against Mount Holyoke College.

Paul Smith's lost its next three games before rattling off an eight-game winning streak and finished the year on an 8-1 run.

"I am looking to bring that unity and just play some hockey and have fun," Powers said. "I have been coming to Can-Am tournaments since I was little, and this area is really magical with all the history. I can't wait to be at Paul Smith's."

Every recruit joining the team in addition to the players returning want to do their part to help the Bobcats take the next step.

Ackerman, a defensive forward who played for Hockey Training Institute in Mulmar, Ontario, wants to do her part to help the team.

"I pride myself on being a really good assist player," Ackerman said.

"I am not always the biggest scorer, but I always want to find ways to contribute. I am really excited to be playing here. There's really nice chemistry."

Paul Smith's is tentatively scheduled to begin its season in October, and Gerrish said the team is planning to play some home games at the Olympic Center as well as the Saranac Lake Civic Center.

For Hays, the idea of playing in Lake Placid at the home of the Miracle on Ice was appealing, but there was more to the new program that caught her attention.

"I'm just really looking forward to playing with all the girls coming into the program," she said.

"It will be an honor to start new traditions with them."