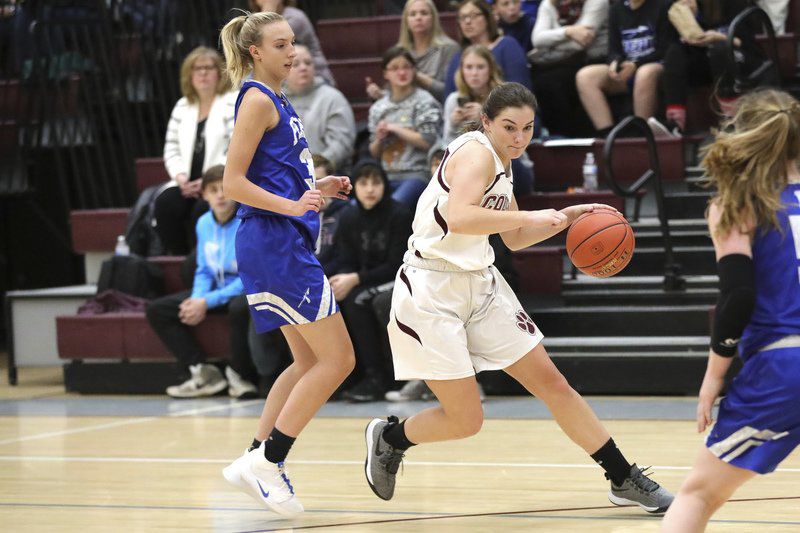 KAYLA BREEN/STAFF PHOTONortheastern Clinton's Kya McComb eyes a lane to the basket as she starts to drive past Peru's Kortney McCarthy (3) during a Champlain Valley Athletic Conference girls basketball game Friday in Champlain. 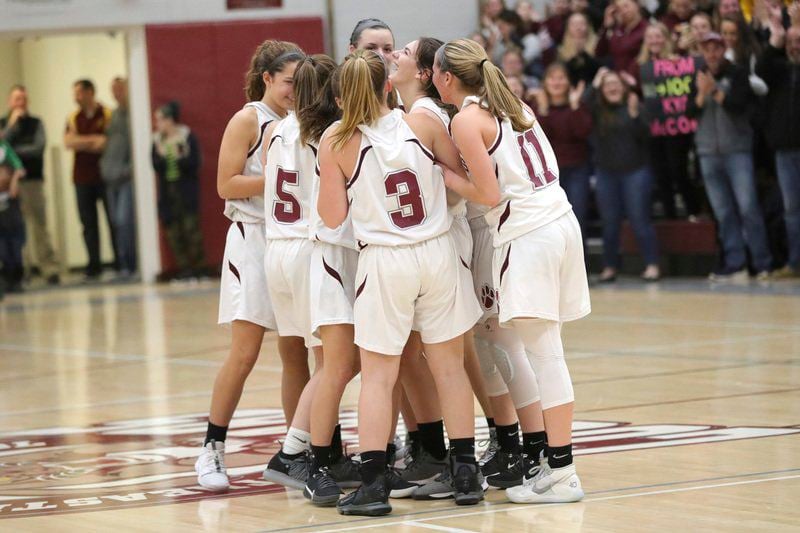 KAYLA BREEN/STAFF PHOTOTeammates congratulate Kya McComb at the end of the third quarter after she knocked down a 3-pointer to reach 1,000 points for her varsity career.

KAYLA BREEN/STAFF PHOTONortheastern Clinton's Kya McComb eyes a lane to the basket as she starts to drive past Peru's Kortney McCarthy (3) during a Champlain Valley Athletic Conference girls basketball game Friday in Champlain.

KAYLA BREEN/STAFF PHOTOTeammates congratulate Kya McComb at the end of the third quarter after she knocked down a 3-pointer to reach 1,000 points for her varsity career.

The senior guard had four points early in the second quarter Friday but picked up her third foul with 5:34 left in the first half and had to take a seat on the bench.

McComb, however, came out with vengeance in the third quarter determined to hit 1,000.

Her highlight moment came right at the end of the third quarter when she knocked down a trey from straight away at the buzzer.

McComb and Abby Racine tied for a team-high 13 points, and Brynn Sample added 11.

Averaging nearly 18 points per game, nine did not seem like much to get, but the pressure started to build for McComb as time kept winding off the clock.

"I was not as nervous throughout the day, but when it started to get closer and closer to the game, I started feeling it more," McComb said.

"I just wanted to get it over with and build some momentum."

After a few consecutive misses in the third when she was just three points away, McComb received a pass from Sample on the wing, took one dribble to her left and pulled up from behind the arc.

When her shot swished through the net and the buzzer went off, her teammates quickly huddled around her and celebrated with hugs as the Northeastern Clinton supporters, simultaneously, came to their feet and applauded McComb's accomplishment.

"It was an amazing feeling," McComb said. "I did not think it was going to go in. When it went in, it was just so awesome, and I was also so relieved.

"It's great to be part of a small community, and everyone knows everyone. It's great to have so many people on a night like this in the crowd. It makes this night so much more special."

McComb is in her fourth year with the Cougars, and her head coach Robb Garrand said she epitomizes everything a coach could want in a player.

"Kya deserved to be on this team the moment she was selected as a ninth-grader," Garrand said. "Her work ethic and commitment has been phenomenal. She is a poster student-athlete from grades to an outstanding talented player.

"She is great with her teammates, but more importantly, a very humble person that is going to go far in life. That is a young lady who will be one of the most premier players that we will ever have."

A back-and-forth contest early saw Northeastern Clinton gain control as the second quarter progressed, and the Cougars held a 28-19 lead at half.

Northeastern Clinton began the third quarter on an 11-2 run, which extended its lead to 39-21 with just under three minutes to go before the start of the fourth.

Bri Brousseau powered the Indians with a game-high 18 points.

She dropped nine points in the fourth quarter and cut the Cougars' advantage to 45-34 after a layup with 3:25 remaining in regulation, but Peru failed to get any closer.

"I give Peru a lot of credit," Garrand said. "They created a lot of defensive intensity that disrupted our movement.

"We always stay humble. We know we are beatable, and that's something we always preach. The biggest lesson (from this game) is if the game does not go the way we want it to go, it's the attitude and remaining positive and having a voice on the court that is most important."