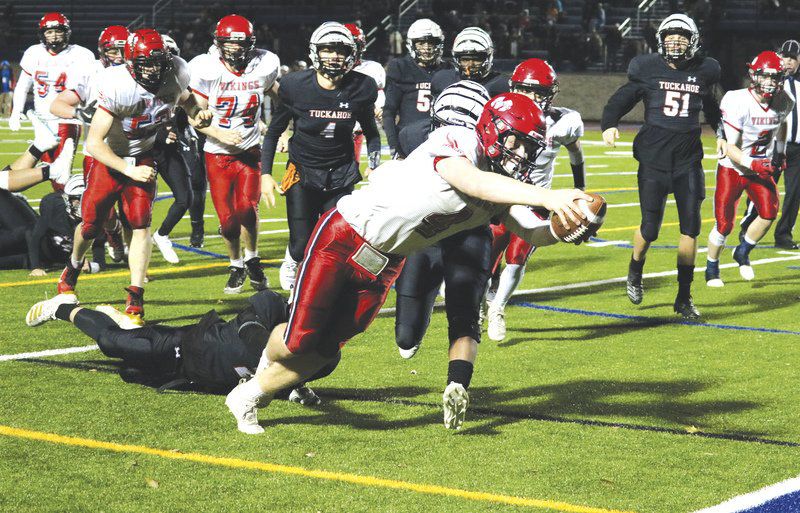 RYAN HAYNER/P-R PHOTOMoriah's Maddox Blaise (4) dives into the end zone for a touchdown. 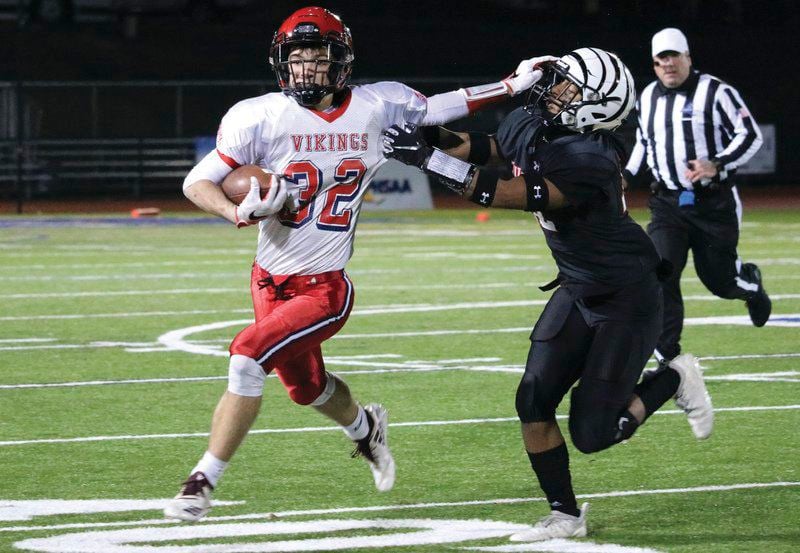 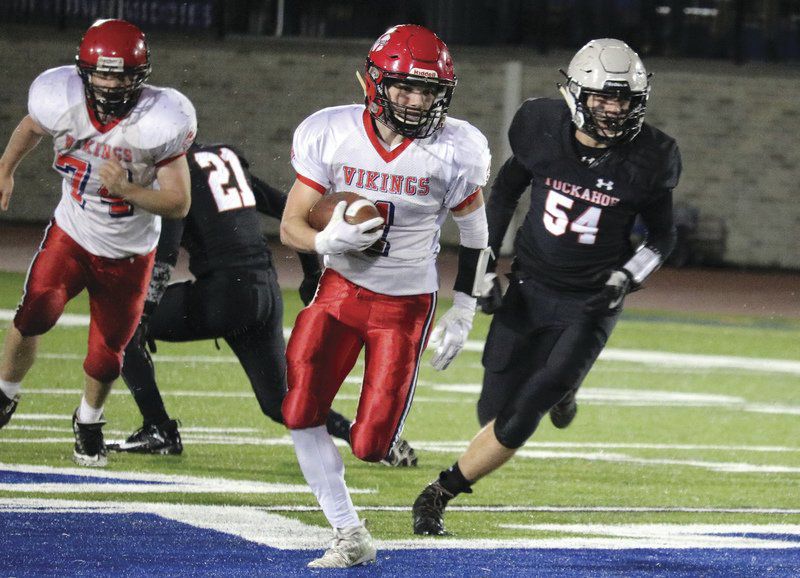 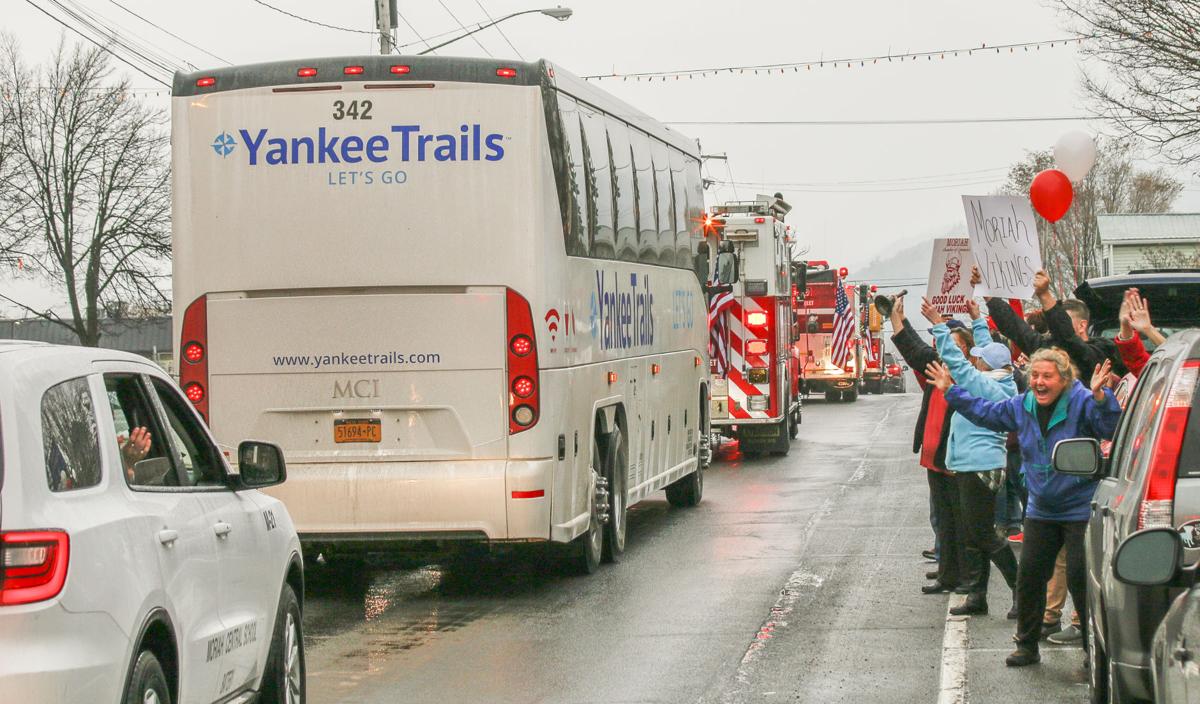 The Moriah Vikings varsity football team left town Friday morning in a bus and SUVs bound for Middletown and the state Class D championship playoffs. Parents and members of the community turned out on Main Street in Port Henry to give them a sendoff that included fire trucks and police vehicles. Moriah played Tuckahoe in the evening.

RYAN HAYNER/P-R PHOTOMoriah's Maddox Blaise (4) dives into the end zone for a touchdown.

The Moriah Vikings varsity football team left town Friday morning in a bus and SUVs bound for Middletown and the state Class D championship playoffs. Parents and members of the community turned out on Main Street in Port Henry to give them a sendoff that included fire trucks and police vehicles. Moriah played Tuckahoe in the evening.

MIDDLETOWN — Maddox Blaise’s record-setting day has Moriah back in the Carrier Dome.

The Vikings (8-3) will face Section VI’s Clymer/Sherman/Panama Nov. 29 for the state title, a rematch of last year’s game that saw the Wolfpack claim the crown with a 26-6 win.

“It’s amazing,” Moriah senior Braden Swan said. “This team has worked so hard. It’s been the main goal — trying to get back to the Dome — and we’re here.”

Blaise entered the game 143 yards shy of the rushing record held by Beekmantown’s Justin Stevens, and his second touchdown — a 31-yard run in the second quarter — tied him at the top.

Blaise eclipsed the record on his next carry, and his final rush of the day, a 27-yard touchdown, put him at 2,125 yards for the season.

“It’s a crazy feeling to come out here and do that,” said Blaise, who was named Moriah’s Offensive MVP for the game. “It all starts with the line – that’s a major part of it.”

The Vikings held an early 8-0 lead when they went 95 yards on six plays with Blaise’s record-tying run giving Moriah a 16-0 lead with 7:05 left in the half. Blaise accounted for 82 of the drive’s 95 yards.

“That was a tone setter for the rest of the game,” Moriah coach Don Tesar said.

On the next drive, Blaise added another 31-yard scoring run to go ahead 24-0.

“The offensive line is doing their job – they’re playing amazing,” said Swan, who added a combined 93 rushing and receiving yards and was responsible for four 2-point conversions. “Maddox is, by far, an outstanding running back. They both work together really well — and they get the job done.”

Seventh-ranked Tuckahoe (9-2) got on the board late in the first half when Justin Lee’s 3-yard quarterback sneak cut Moriah’s lead to 24-6.

Lee completed 14-of-29 passes for 219 yards with an interception and one touchdown, a 67-yard strike to Evan Rivera in the third quarter. At that point Moriah held a 32-12 lead, and the Vikings responded with a touchdown of their own on the next drive, a 13-yard run by Blaise.

“That was the best part of our defense – we had the ball, and they couldn’t stop Maddox,” Tesar said. “Our offensive line blocked extremely well.”

The Vikings attempted just four passes, rarely needing to go to the air as they totaled 413 rushing yards.

Cody Petro led Moriah’s defense with 12 tackles on his way to being named Vikings Defensive MVP.

Blaise added an interception on defense, coming down with his own pass deflection. In addition to the rushing record, the junior’s five touchdowns gave him 21, three short of the single season record shared by two former Moriah stars — Jim Carlson and Wally Edwards.

Second-ranked Clymer/Sherman/Panama (10-1) overcame a 27-13 halftime deficit Friday and edged top-ranked Tioga, 28-27, for a chance to defend its title against the Vikings.

Swan, meanwhile, isn’t concerned about the 12 p.m. game potentially interfering with a home-cooked Thanksgiving dinner the day before.

“Golden Corral will work,” he said.

PERU [mdash] James A. Carpenter, Sr. 59, New York passed away, Saturday, August 1, 2020 at his home. He was born in Albany, New York on May 12, 1961 the son of Alonzo John Carpenter and Mabel Agnes Devlin. Of his many passions, James fostered a love for art, wood carving and literature with …

RUTLAND, VT. [mdash]Anne Beckwith Burton Baker, 96, passed away in May of this year. She is survived by her three children, three grandchildren and seven great-grandchildren. Memorial to be held by the family at a later date.

GUILDERLAND [mdash] Kelsey Lynn Lussier Taylor, 29, of Guilderland, N.Y., passed away unexpectedly on Wednesday, July 29, 2020. Kelsey was born on May 6, 1991, in Plattsburgh, N.Y. She is survived by the loves of her life and precious children, Kaitlyn Josephine Taylor and Parker James Taylo…