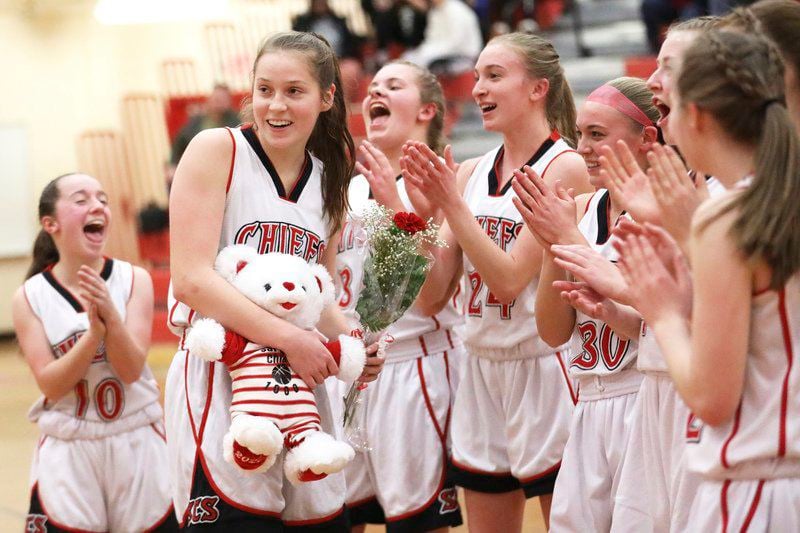 KAYLA BREEN/STAFF PHOTOHolding flowers and a teddy bear, Payton Couture celebrates with her teammates after eclipsing the 1,000-point mark during a Champlain Valley Athletic Conference girls basketball game against Beekmantown, Friday, in Saranac. 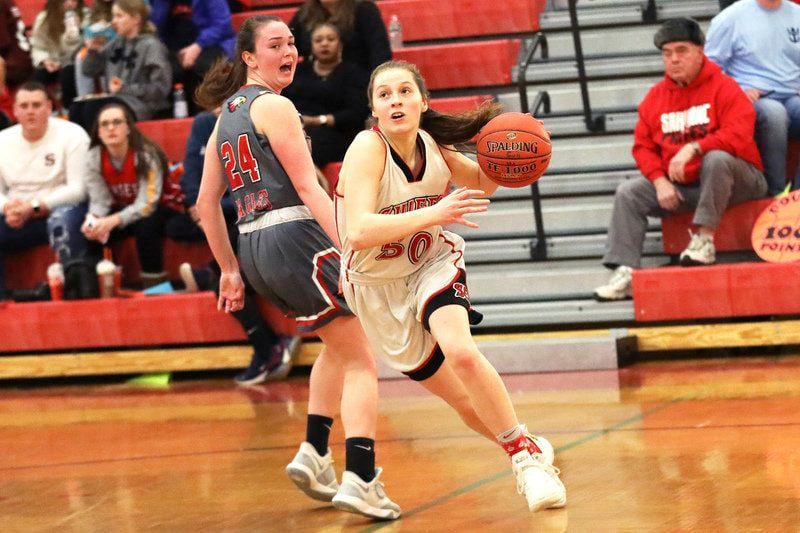 KAYLA BREEN/STAFF PHOTOHolding flowers and a teddy bear, Payton Couture celebrates with her teammates after eclipsing the 1,000-point mark during a Champlain Valley Athletic Conference girls basketball game against Beekmantown, Friday, in Saranac.

The Chiefs' junior forward went over 1,000 when she pulled up just inside the arc and watched her shot bounce off the rim and through the net.

"There was a bunch of relief when that shot went in," Couture said.

Couture scored 23 points on the road against Plattsburgh High, Thursday, and sat at 995 career points heading into Saranac's game against the Eagles.

"I was glad I could do it at home," Couture said. "My teammates and coaches have meant so much to me. I could not accomplish any of this without them."

Plenty of festivities took place before the game, as it was Senior Night for the Chiefs.

Saranac honored its two seniors Hannah Peroza and Kayla Myers before the tip.

Once the game got underway, Beekmantown tried to play spoiler, but the Chiefs fended off a pesky opponent.

With the score knotted at 19-all headed into the third quarter, Saranac went on a run.

Led by six points from Couture, the Chiefs outscored the Eagles, 10-0, in the third quarter and grabbed control.

The run extended to an 18-2 burst with 5:15 left in the fourth that put the contest out of reach.

"We are not going to have any success in the future if we don't play good defense," Saranac coach Tim Newell said. "After a messy first half from us, the kids really came together in the second half and got it going. We shared the ball much better, and our defense is what carried us."

Newell said he was happy for his seniors and for Couture.

"Last year, I challenged Payton, but she had a hard time taking that tough love," Newell said.

"This year, she has really blossomed. I am biased, but I think she is the most well-rounded girls basketball player in Section VII. She can play in the post, she can pull up and she can drive. She can do it all."

Jhenna Trombley and Avery Durgan both scored a team-high eight points for Beekmantown.

What seemed to be an Eagles' offense finding its rhythm in the first half sputtered after halftime.

"We have struggled all year on getting our offense going," Beekmantown coach Kate Duprey said. "The third quarter hurt us. We went cold. We just could not get anything going, but I was really proud of the heart our girls showed, especially in that first half.

"The atmosphere (Friday) was great, though. I want to congratulate Payton Couture on getting to 1,000 points as a junior. That is a great accomplishment."