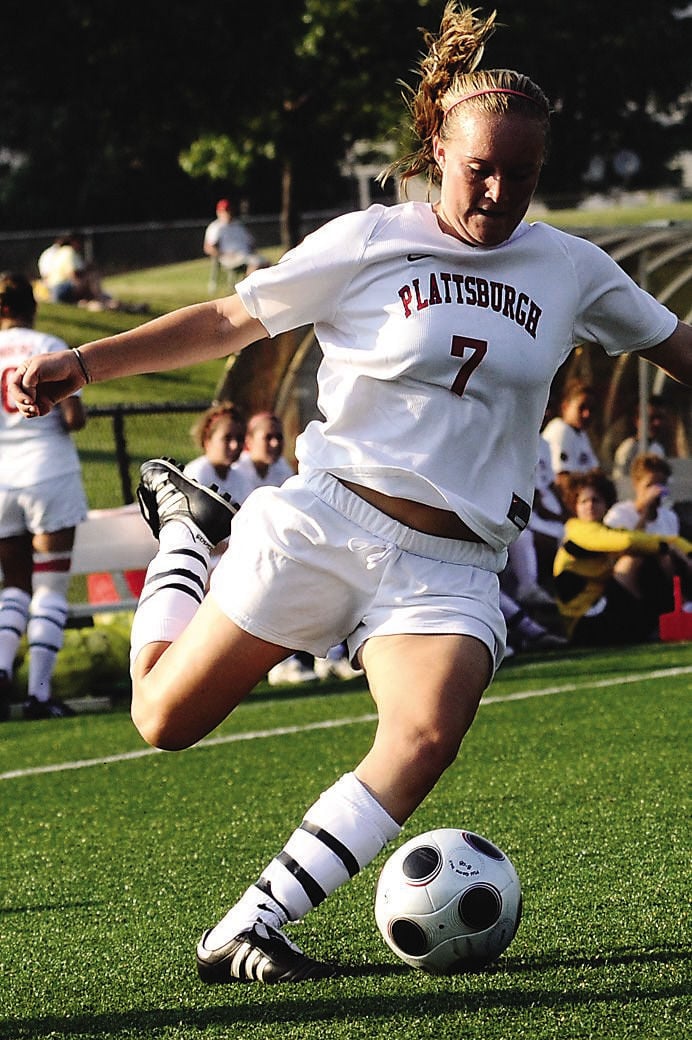 Plattsburgh State-s Liz Radigan (7) sends the ball towards the net during an early-season game against Norwich University this season. Radigan will help lead the Cardinals in today-s SUNYAC Tournament quarterfinal game versus Cortland at home. Preview on B3. 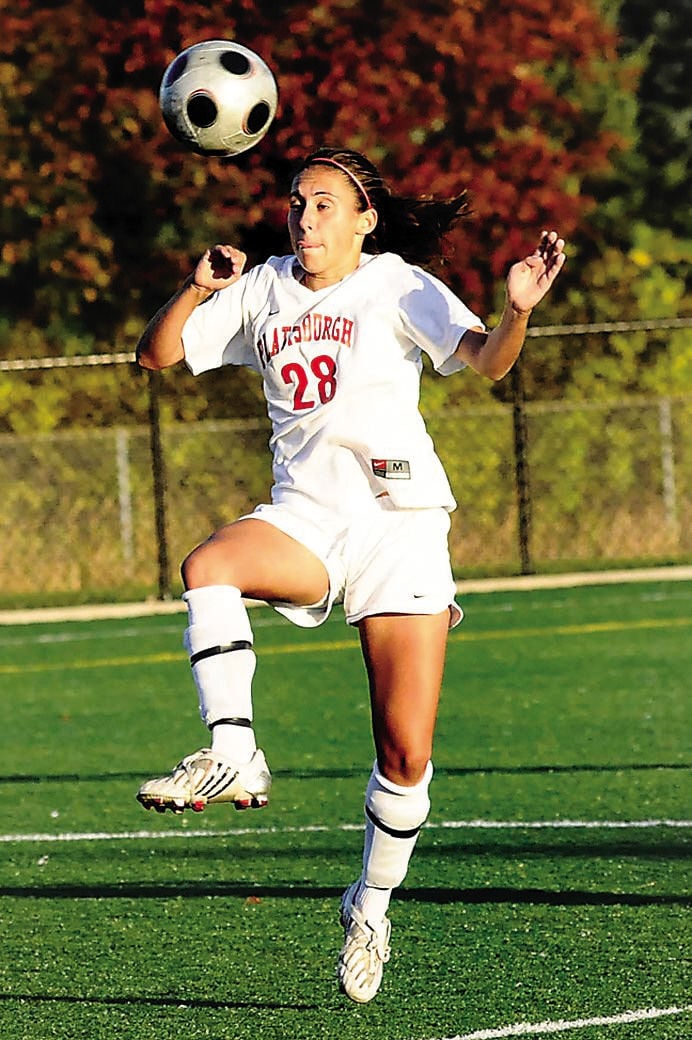 Plattsburgh State's Helen Giroux (28) contests the ball against a Fredonia defender during a SUNYAC regular season game. Giroux leads the Cardinals with 14 goals.

Plattsburgh State-s Liz Radigan (7) sends the ball towards the net during an early-season game against Norwich University this season. Radigan will help lead the Cardinals in today-s SUNYAC Tournament quarterfinal game versus Cortland at home. Preview on B3.

Plattsburgh State's Helen Giroux (28) contests the ball against a Fredonia defender during a SUNYAC regular season game. Giroux leads the Cardinals with 14 goals.

PLATTSBURGH -- Karen Waterbury likes what she sees from her Plattsburgh State women's soccer team. And, that's a good thing considering the time of the season it is. The No. 3 seed Cardinals host No. 6 seed Cortland in a State University of New York Athletic Conference Tournament quarterfinal game at 2 p.m. today at the Plattsburgh State Fieldhouse Complex. At stake is a berth in the SUNYAC Tournament Final Four in Oneonta this weekend. "We played great against Skidmore in our last game," Waterbury said. "We're moving the ball real well and our defense is holding up. "We're hoping that we're playing our best soccer and things are coming together for us." The other SUNYAC Tournament quarterfinal has No. 3 seed Geneseo hosting No. 4 seed New Paltz. Top-seeded Oneonta and second-seeded Brockport have opening-round byes in the tournament. Brockport will play the Plattsburgh State/Cortland winner on Friday at 1:30 p.m. in the semifinals. The Cardinals (13-2-2 overall, 7-2-1 SUNYAC) are once again being led in scoring by Helen Giroux (14-6-34) and Liz Radigan (11-2-24). Also with double figures in points are Emily Riley (3-9-15), Lindsey Keyser (6-2-14), Megan Rivage (5-2-12), Jennifer Hulihan (4-3-11) and Liz Everett (5-0-10). "We hope to control the game by playing well up front," Waterbury said. "We have been creating good chances, with Helen and Liz working well together, and we're coming off a good practice." Kathryn Lind has compiled an 11-2-2 record in net, with a 0.72 goals-against-average, for Plattsburgh State. The Cardinals, however, will be without the services of senior defensive standout Lindsay Gilbert, who suffered an injury in her last game. "It's unfortunate for us, but also for Lindsay," Waterbury said. "She's a senior and has been playing well. "But, our defense, led by Kathryn in goal, along with Kaitlin (Collica), Erin Norris and Jackie Fanneron, will need to step up. We'll do some shuffling, with Kaitlin Graeb back there and also possibly Laura Riedel, who would move back from midfield. "We've stayed relatively healthy all year and there's nothing we can do about Gilbert's injury. We're in the playoffs now and we want to play this weekend." The Cardinals, who battled Skidmore College to a 1-all non-conference overtime tie last Thursday, have outscored opponents by a 64-11 margin this season. The Red Dragons (7-6-4 overall, 4-4-2 SUNYAC), meanwhile, are coming off Friday's 2-1 overtime victory over St. Lawrence University. Cortland holds a 24-17 scoring edge over its opponents and is led in scoring by Jackie Deluise (5-1-11), Bridgette DeSantis (4-3-11) and Kelsey Allen (2-5-9). Pam Monnier sports a 6-6-4 record in net, with a 1.04 gaa. The Cardinals recorded a 2-1 overtime victory over the Red Dragons on October 3 in Plattsburgh, with Radigan and Giroux scoring goals. Giroux tallied the game-winner in overtime. "Cortland is a pretty solid team all-around from their goalie out," Waterbury said. "We will need to play our game. "Although we played well enough to win the first time we played them this season, we were capable of playing better. But, I'm sure they will be a different team as well."

A combined funeral service for Paul and Bessie Senecal will be held on Saturday, May 15th, at 11 a.m., at St. Joseph's Catholic Church, 56 West Church Street, West Chazy, N.Y. A private burial service will be on Monday, May 17th, at St. Peter's Cemetery in Plattsburgh, N.Y.; this day would h…

Spring burial for Francis C. Siskavich, "Frenchie", 94, of Lyon Mountain who died on February 16, 2021 will be held at St. Bernard's Cemetery, Lyon Mountain on Friday, May 14, 2021 at 1 p.m. Arrangements are with the Chateaugay Funeral Home.