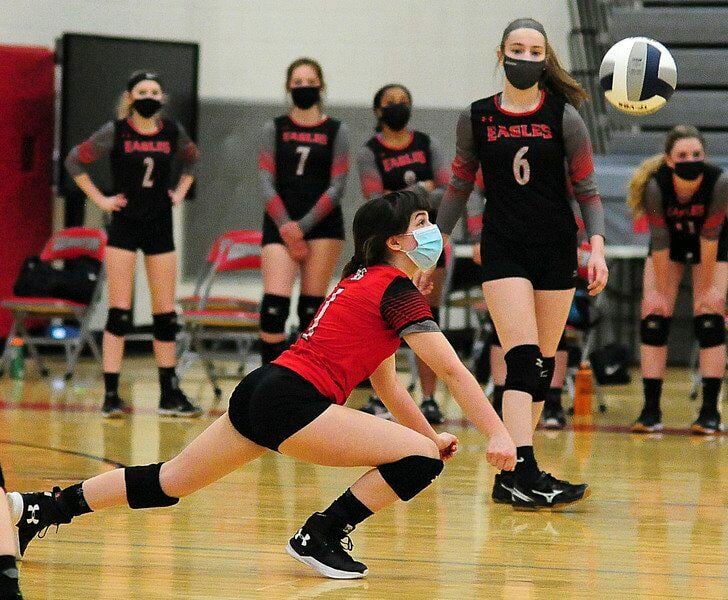 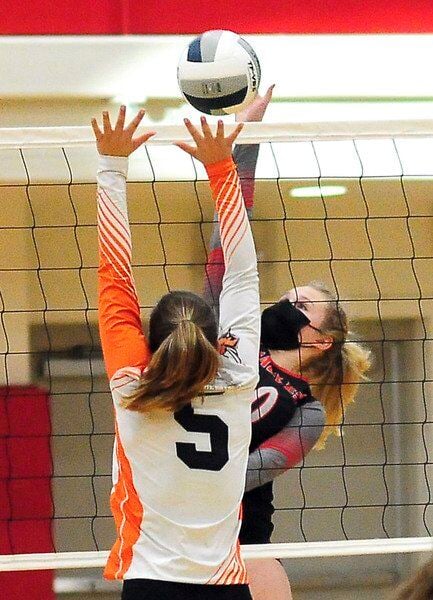 BEEKMANTOWN — The Champlain Valley Athletic Conference volleyball season is underway as part of the "Fall II" season in Section VII, and there was plenty of competition, Tuesday.

Beekmantown came away with a 3-1 victory over Plattsburgh High in the only match of the night that did not result in a sweep.

Alexys Hawks did a great job facilitating for her team with 21 assists, and she also managed to come away with six digs, four aces and four kills to pace the Eagles and help first-year coach Jordynne Ales come away with her first victory.

Jenna Begor finished with a team-high eight digs, and Brooke Ruest led Beekmantown with eight kills to go along with seven more from Karli Hall and six by Lauren Cross.

The Eagles will be right back in action today when they travel to play Northeastern Clinton, while the Hornets host Saranac.

PHS- No statistics reported to Press-Republican.

SARANAC — The Patriots snagged a lot of momentum when they came away with a close 25-21 victory in the second set before going on to sweep the Chiefs.

Makayla Rock did a nice job as a facilitator with a team-high 21 assists for AuSable Valley, and Abby Sawyer did her part with 10 assists, nine digs and seven points.

Bela Perez gave AuSable Valley one of its best performances in the dig category with eight.

Saranac lost a bit of steam in the third set, losing by 11 points after being pesky in the first two and falling by just a combined nine.

Mackenzie Taylor brought her shovel and registered a match-high 16 digs for the Chiefs.

CHAMPLAIN — The Bobcats started off their season well with a three-set sweep over the Cougars.

Elyse Hogan powered Northern Adirondack with a double-double thanks to her 12 points and 10 digs.

"Elyse Hogan led NAC with points and digs tonight as well as her court awareness," Bobcats coach Elizabeth Brown said. "Morgan Lawrence shined at the net with 10 kills. I am very proud of the whole team for how they played tonight after a short preseason."

Northeastern Clinton fell 25-13 in both the first and second sets and made things a bit closer in the third as the Cougars scrapped and never gave up before falling 25-15 to conclude the match.

Mackenzie Gardner (6) and Kenadie McComb (4) combined for 10 digs for Northeastern Clinton, while McComb, Brooke Basmajian and Sadie Dumas all recorded one kill.

LAKE PLACID — The Nighthawks took on a feisty Blue Bombers squad and came away with a sweep.

The performance of the night went to Peru's Rachel Madore who notched a triple-double with 12 points, 16 assists and 12 digs.

The Nighthawks' Alyssa Bartholomew pitched in with 11 digs and nine points, while Payton Seymour contributed in numerous ways thanks to her seven points, seven digs, five kills and four aces.

Ryleigh Clary totaled nine points, five aces and five digs to go along with seven digs and five kills from Katie Finn on a good night for Peru.

While the result was not what Lake Placid wanted, Blue Bombers' coach Sandy Huber was proud of her team's effort.

"We only had seven players eligible due to the first two weeks of practice being over spring break, but they adapted and played hard," Huber said.

"Peru had some tough servers, and we had a hard time on serve receive. Overall, I'm happy that we kept it as close as we did against a strong team."

"Aubrey Hayes did a great job setting in her first varsity match and had some key digs," Huber said. "Our other setter, Dylan Bashaw, is a 3-year starter and her leadership has really helped the team adjust during our short preseason. When Dylan got confident with her swing tonight, she hit really well, and that gave the team a big boost. Karis Hudson was solid on defense."

, 73, passed away February 26, 2021 at Advent Health in Orlando, FL, surrounded by her family. A Mass of Christian Burial will be held Friday, May 14, 2021 at 11:00 am at St. Joseph's Church in Dannemora. Burial will follow in Church of Assumption Cemetery. You may share a photo, story, or c…

71, of Cadyville, passed away Thursday, May 6, 2021. Mass of Christian burial will be on Wednesday, May 12, 2021, at 1 p.m. at St. Joseph's Church in Dannemora. Arrangements entrusted to Brown Funeral Home, Cadyville.

PLATTSBURGH [mdash] Mary Bouvia, 68, of Sailly Avenue, passed way, Thursday, May 6, 2021. She was born in Plattsburgh on October 22, 1952, daughter of Hubert and Joyce (Sterling) Wells. Mary married Robert Bouvia on December 28, 1974. She worked for the Plattsburgh School District as a schoo…