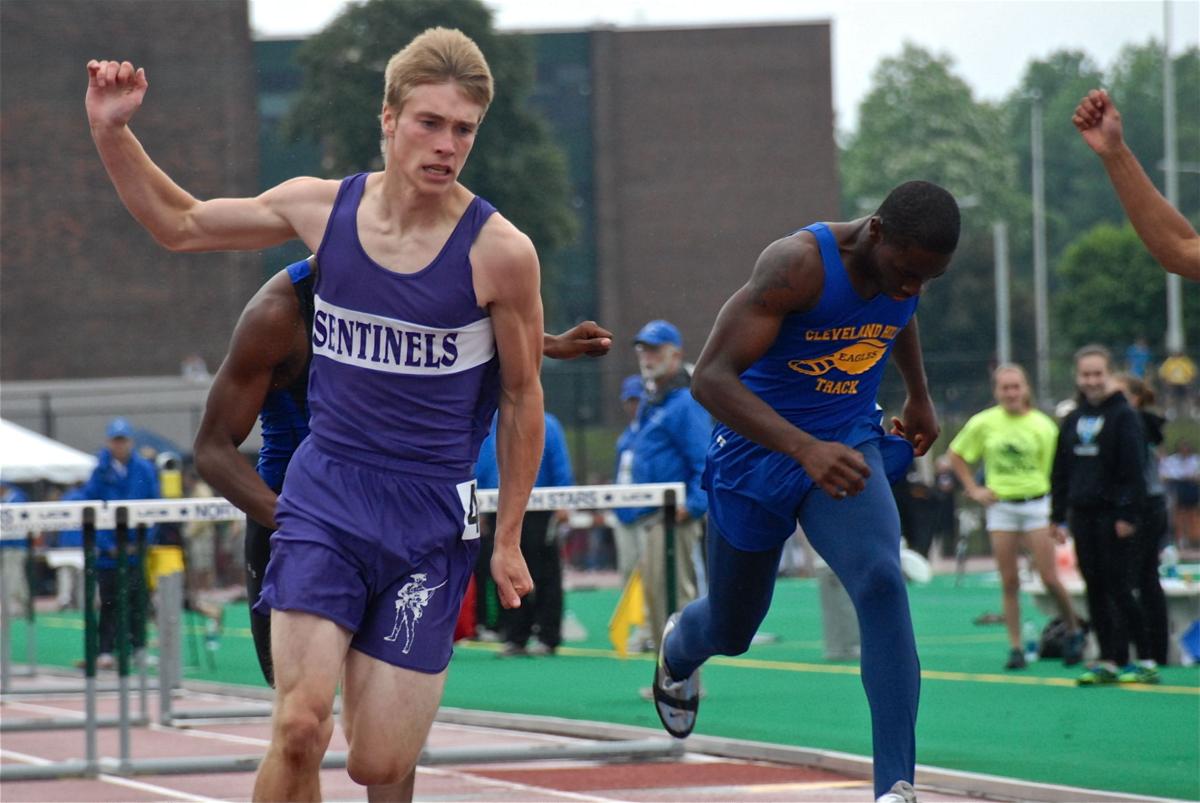 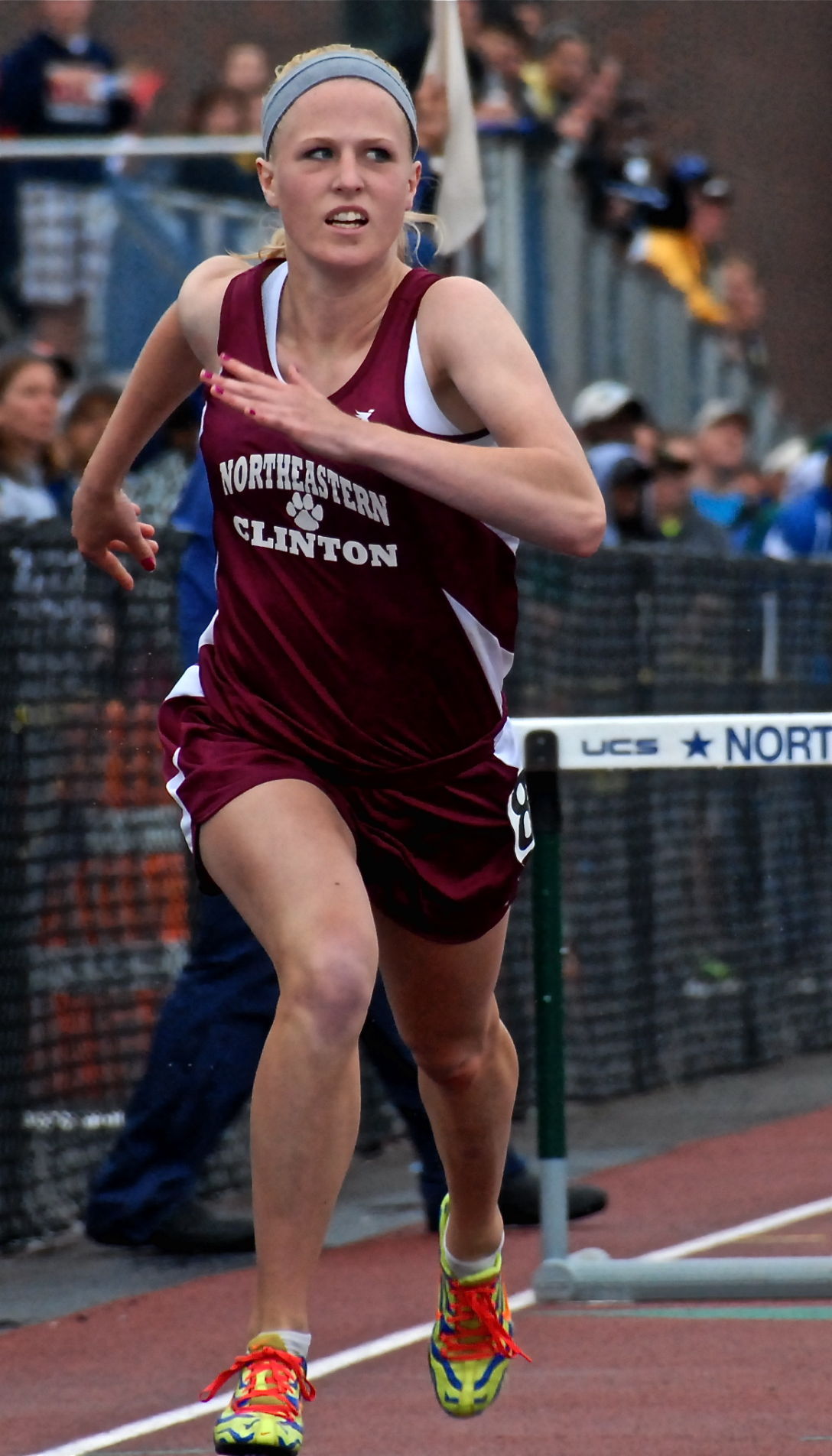 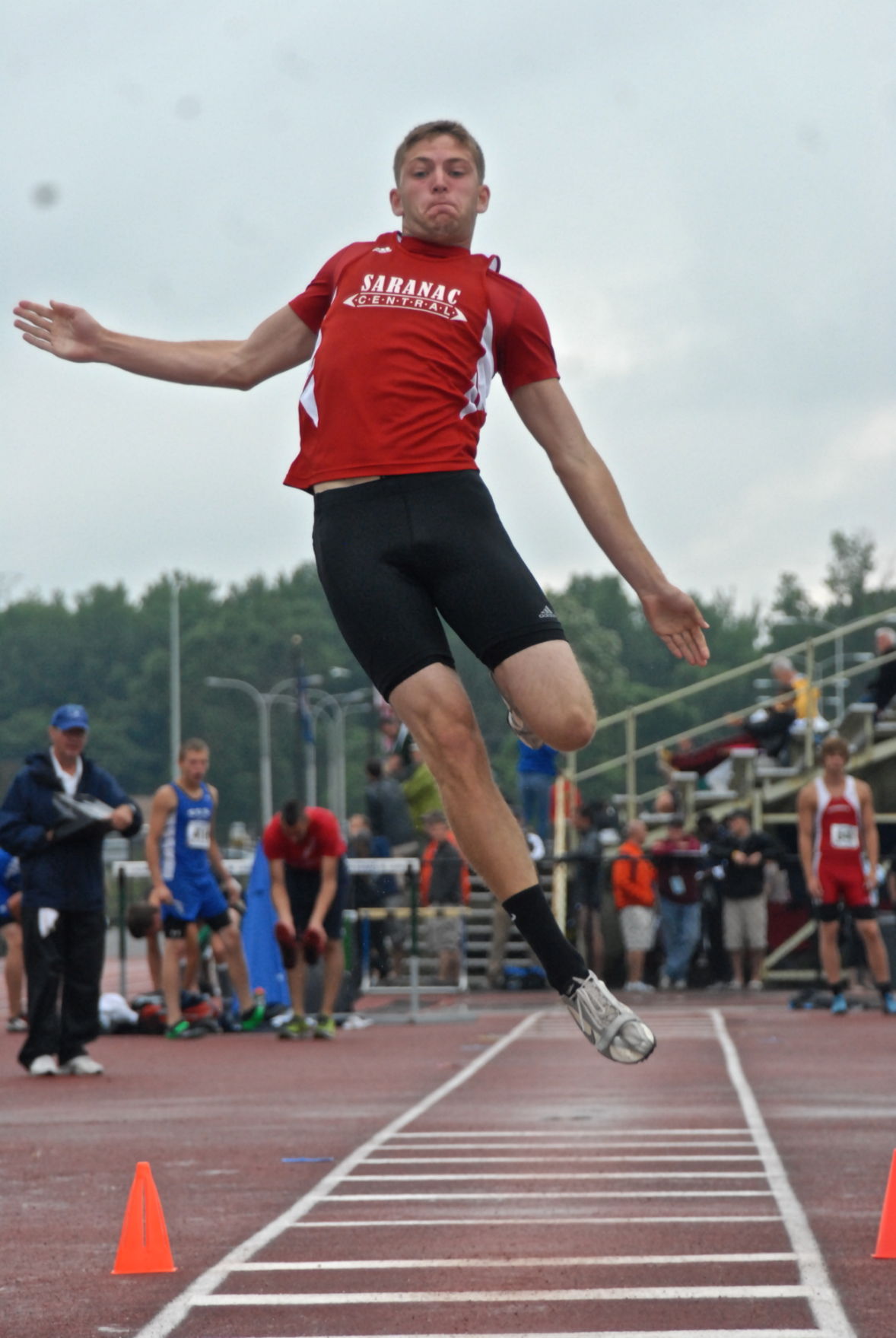 Staff Photo/Ryan Hayner Ryan Kerner takes a leap in the long jump as part of the pentathlon during the New York State Track and Field Championships at Cicero-North Syracuse High School Saturday. Kerner finished third in Division II and eighth in the Federation. 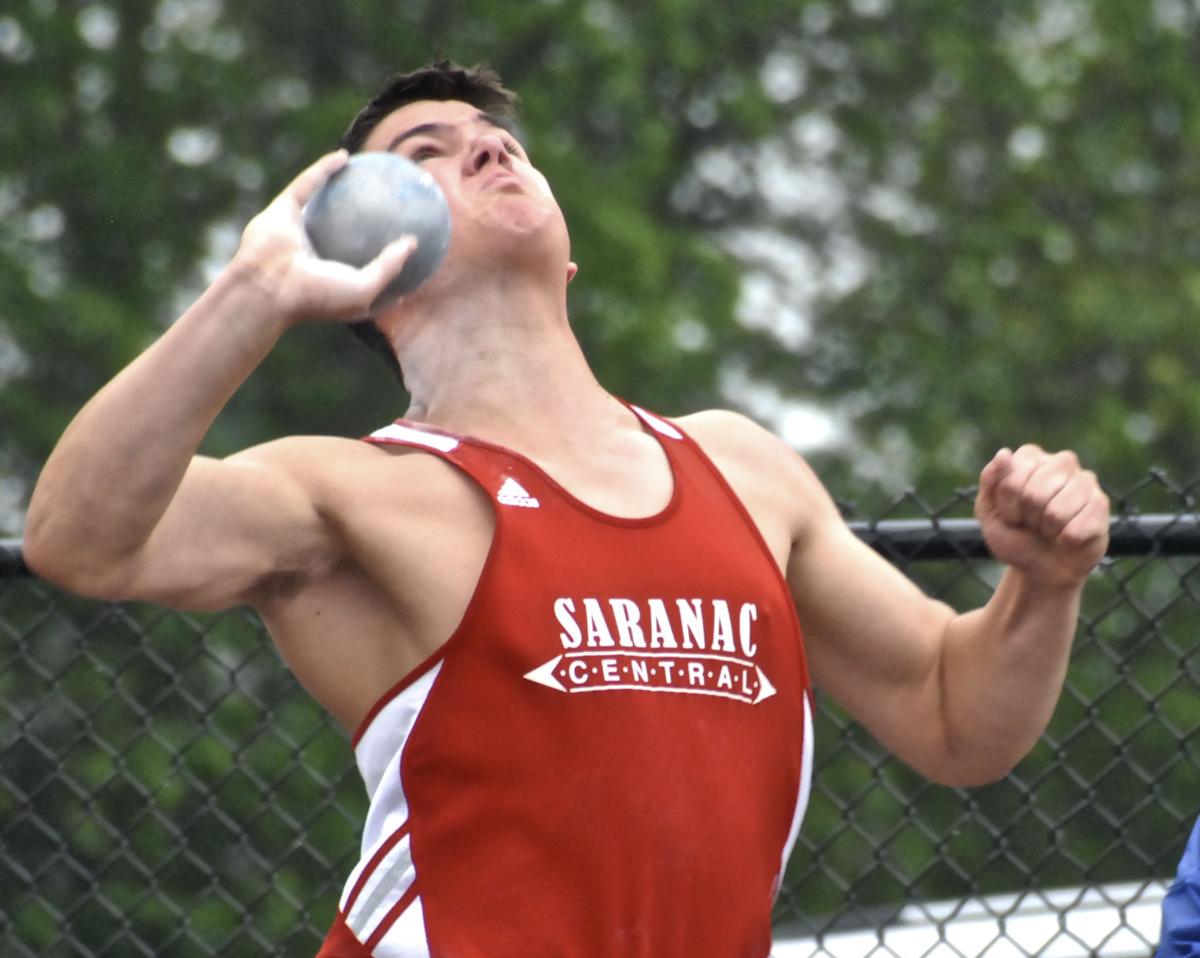 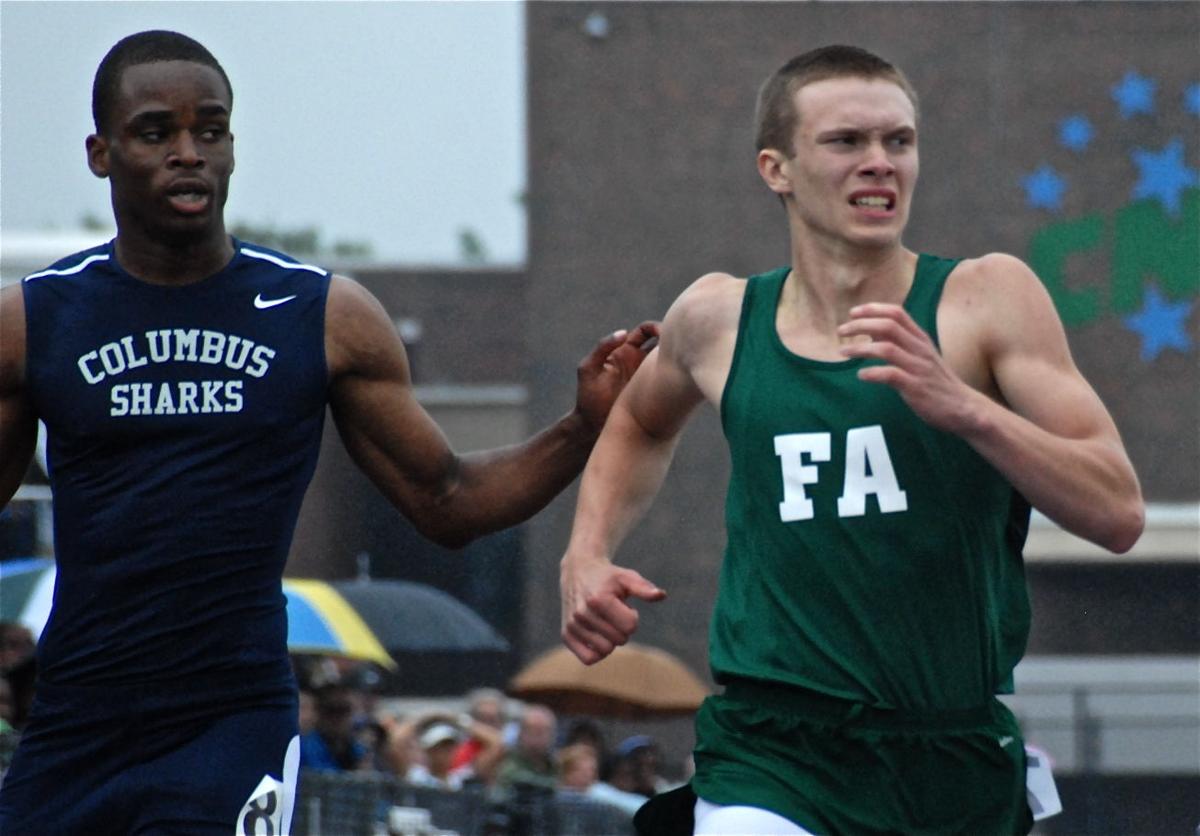 Staff Photo/Ryan Hayner Ryan Kerner takes a leap in the long jump as part of the pentathlon during the New York State Track and Field Championships at Cicero-North Syracuse High School Saturday. Kerner finished third in Division II and eighth in the Federation.

The Ticonderoga sophomore won the Division II 110-meter hurdles final and then captured the Federation title, besting the top runners in the state on the final day of the New York State Track and Field Championships at Cicero-North Syracuse High School.

Hebert won the Division II (small schools) title in 14.33 seconds and then ran a 14.41 in the Federation race, all in wet conditions. Federation races include the athletes with the eight fastest times, regardless of whether they’re from Division I or Division II.

“I can’t ask for anything more,” Hebert said. “I can’t complain about the times either. Perfect. Ran my race. It’s a great day.”

“We have not had a year like this since 2006 where so many people have advanced, gotten medals and (personal records), so that’s good for the section,” Ticonderoga coach Walter Thorne said. “And we’re a young team in the section, so there’s good things to come.”

Hebert reached the state meet last year and took fourth place in Division II, clocking in at 14.98. This year has been nothing short of remarkable.

He shattered his own Section VII record at the William F. Eddy Jr. Memorial Track and Field Meet at Schenectady High School on May 19, running a 14.07. That time stands as the fastest in New York this year and the second fastest time ever for a sophomore. Hebert didn’t need to come close to that time over the weekend to win.

Thorne wasn’t the least bit surprised about the outcome and sees a bright future for Hebert.

“I expected him to win, but the way he performed under these conditions, being a sophomore, is phenomenal,” Thorne said. “This guy is trainable. He listens to me, he follows the plan and I couldn’t be more happy. We are setting goals for next year; he is going to work out with me this summer and in the fall.

“There’s no end to what this young man can achieve. I look to see him in the Olympics maybe four years from now because I think he has that possibility.”

Saranac boys’ coach Chris Verkey, a former collegiate All-American who still holds four Plattsburgh State hurdles records, counts himself among Hebert’s fans. He made sure to catch both of his races.

“The times he has run as a sophomore — he’s just a special athlete; he’s a special kid,” Verkey said. “It’s just something you’re not going to see probably ever again in Section VII or state-wide. I think he’s one of the fastest kids in state history for a sophomore.”

Verkey also got to enjoy two of his own athletes having a strong final day.

Duval, a senior, was making his third trip to states for the shot put. He finished 10th last year and 15th in 2010 but finally broke through Saturday, taking second in the final with a throw of 52 feet, 9.75 inches. He also qualified for the Federation competition, finishing eighth (51-4.25).

Duval said winning “meant a lot” because he’s a senior, and he credited Saranac throwing coach Mike Castine for much of his success.

“He means the world to me because over the last four years it was just phenomenal how much I improved,” Duval said.

Kerner, also a senior, placed third in the pentathlon and eighth in the Federation standings. His 3,222 points broke the Saranac school record, previously held by Ben Depo.

After teaming up to win the Division II title in the 400 relay Friday, Jess Huber earned a second medal with a second-place finish in the 200 dash.

But Huber, who entered the weekend as the top seed and had the top preliminary time Friday, was disappointed with not winning the title. She finished in 25.83.

Huber didn’t want to criticize the officials but said she didn’t have the amount of warm-up time she is used to.

“I mean I’m upset that I didn’t get my individual state title, but I feel like I would have been even more devastated if we didn’t win (Friday) in the relay,” the senior said. “It means more winning it with other people than just myself.”

Northeastern Clinton junior Mallory Honan surprised herself on Friday when she took third in the long jump, breaking the Section VII record with a distance of 17 feet, 7.25 inches.

She added a second medal on the second day, earning a fifth-place finish in the 100 hurdles in 16.56, but it was a slower time than what she expected to run.

“It looked like a pretty slow race for everyone just because of the weather and everyone’s exhausted,” said Honan, who added that it was still a great honor to medal twice. “But hopefully next year I can take it up to top three, and that’s what I really want to aim for.”

Peru senior Dan Lennon capped his outstanding high school running career with an eighth-place finish in the 1,600 (4:25.70). He won the Division II 3,200 title on Friday and finished second in the Federation.

“I’m disappointed that I didn’t do as well as I hoped,” said the Syracuse-bound Lennon. “I guess it’s just missing so much time in the season from injuries and then being sick, I guess it’s just hard to get back into it so quickly. I was sick three weeks before the state meet, so it sucks to miss time like that.”

“It will be good for next year, so now I can know what to improve on. Just improve my stamina and I’ll be good,” he said.

Editor's note: The original story included incorrection information regarding Jay Hebert's Federation victory and Section VII Federation winners in the past. A correction will be issued in Monday's newspaper.