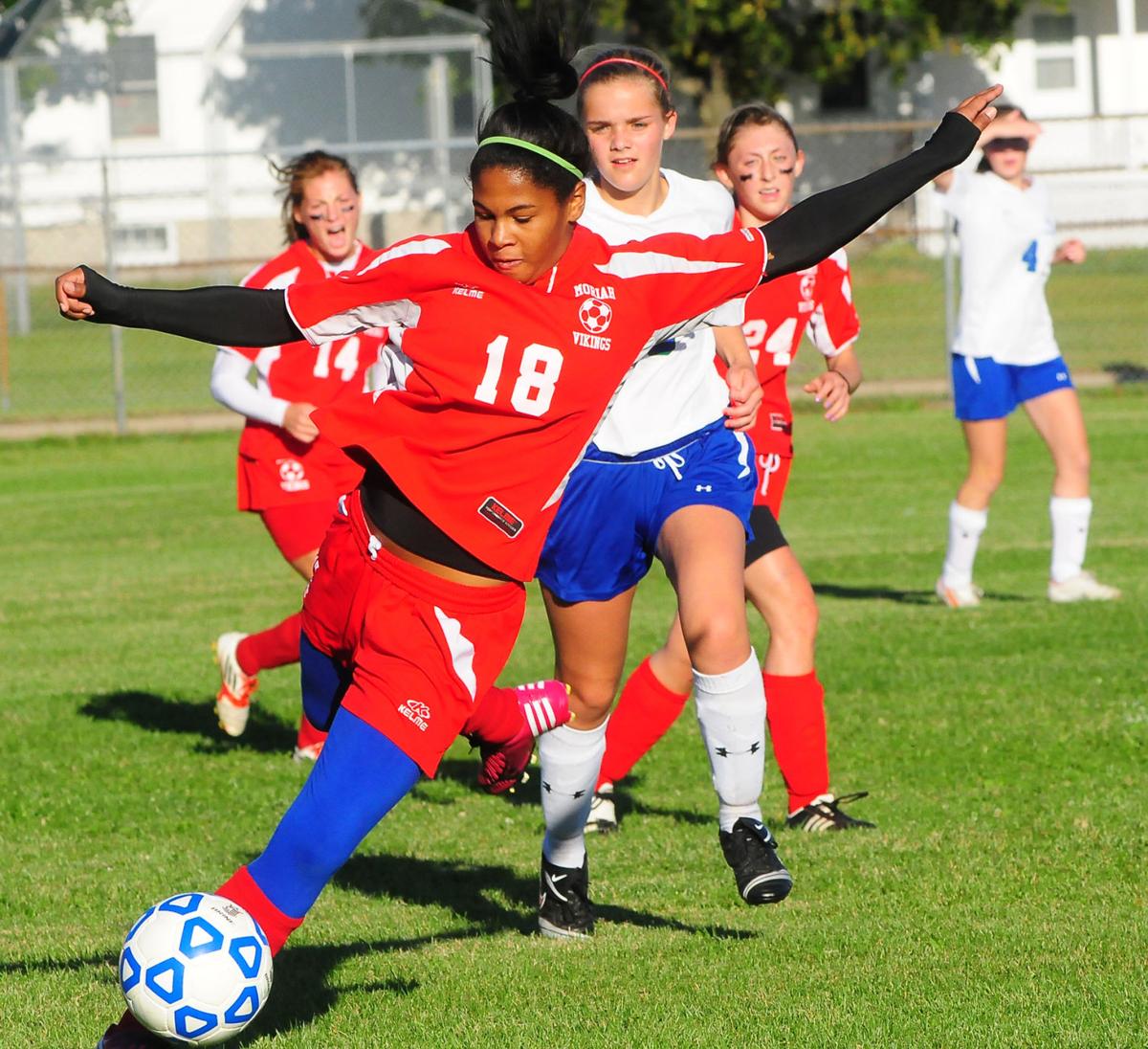 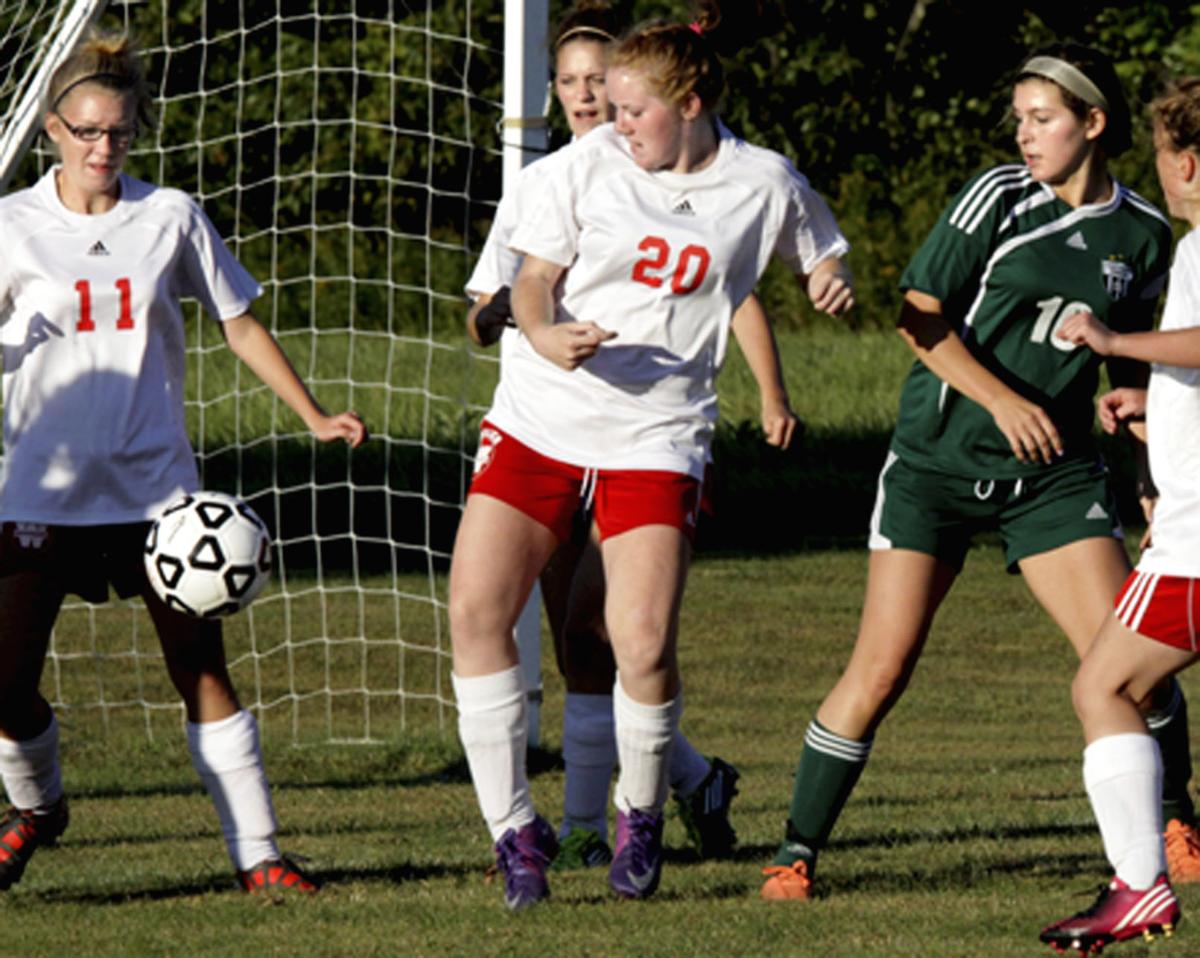 CLINTONVILLE — The AuSable Valley girls’ soccer team has good reason to be a little tired.

A day after dropping a tough 1-0 overtime loss to Beekmantown, the Patriots were back at it Thursday night in another overtime battle — this time a 3-1 victory over Saranac Lake in Northern Soccer League action.

Haley Taylor and Taylor Saltus scored in the second overtime to provide the margin of difference.

“The girls are a little tired,” said AuSable Valley coach Bruce Bourgeois. “Both teams defended well tonight, and it was a well-played game.”

The Patriots had to battle just to get into overtime.

Katey Snyder put the Red Storm on the board with 21:44 gone in the first half, and it stayed that way until Megan Strong’s goal with 8:50 remaining in regulation tied it and put the two teams in overtime.

Following a scoreless first overtime, Taylor tallied the game-winning goal with 4:44 gone in the second extra session, and Saltus added her insurance goal less than two minutes later, at 6:13.

Nichole Pulsifer and Saltus combined for 12 saves in the AuSable Valley nets, and Katie Buckley made 20 stops for Saranac Lake. The Patriots finished with a 30-15 advantage in shots on goal.

BEEKMANTOWN — Kallie Villemaire’s marker at 38:30 of the second half proved to be the game-tying goal as the Eagles and Hornets ended in a draw.

Hailey McLaughlin buried the Hornets’ lone goal of the contest on an assist from Madison Trombley with just under a minute remaining in the first stanza.

Villemaire and midfielder Marle Curle each played well for the two Division I teams.

Beekmantown led the shots 16-11 in a tightly contested contest.

PLATTSBURGH — Peyton Falb was unstoppable with four goals and an assist as the Knights (2-1) blanked the Vikings.

Paige Spittler added a goal and assist for Seton Catholic. Falb and Spittler each scored in the first half, while Falb netted three more after intermission.

The Knights held a 21-19 edge in shots over the Vikings, who were missing players due to injury.

Kelli Ryan posted the shutout in the Seton Catholic nets with 10 saves and played well. Lauren Cross finished with 13 stops for Moriah.

WILLSBORO — Abbey Snide and Gwen LaPier each collected a goal and an assist in a 5-0 defeat of Division II foe Willsboro.

The Eagles jumped out to a 2-0 lead at the half with goals from Snide at 27:50 and LaPier to open scoring.

Courtney Gilmore, Cailee LaPorte, and Heidi Kreckel each buried markers in the final 32 minutes of play to keep Chazy on top for keeps.

Willsboro keepers Renee Marcotte and Stephanie Blanchard each recorded 13 saves in net while being peppered with 30 shots on goal.

Logan Baker got the win between the pipes.

SARANAC — The Chiefs got goals from three different players in a shutout of the Indians.

The Chiefs received a shutout in net from Jamie Favreau, who finished with 13 saves.

Saranac held a 26-16 advantage in shots. Madeline Barber and Shannon Bombard combined for 17 stops in net for Peru, which was missing some players due to illness and injury.

ELLENBURG — Rachael Venne and Magan Magee scored two goals each to lead the Bobcats (2-2) past the Lions.

Magee’s first goal of the game, at 11:47 of the second half, put Northern Adirondack ahead to stay at 2-1.

The Bobcats held a 15-8 shot advantage. Stephanie Snide recorded the win in net for the Bobcats with six saves.

LAKE PLACID — Peyton Barney’s goal 22:00 into the second half broke a 1-all tie and gave the Blue Bombers their victory.

Liza Marinis put Lake Placid ahead in the first half before Andrea Rich tied it for the Sentinels at 8:03 of the second stanza.

Liz Leff turned away seven shots in net for the Blue Bombers, who got strong games from Barney at forward and Brooke Reid in the midfield.

Megan Campney was solid in the Ticonderoga nets with 12 saves as Lake Placid held a 14-8 shot advantage.

Minerva/Newcomb opened the scoring at 12 minutes of the first half when Makenzie Winslow put the ball in the back of the net to put the Mountaineers up 1-0. However, the lead was short lived.

Jessica Bain’s marker on a direct kick sparked a rally as the Orange executed four unanswered goals with Jillianna Miller, Emma Gray, and Moore adding to the score sheet.

Indian Lake/Long Lake led the shots on goal department 27-14, with keeper Madison Miller being credited with the save between the pipes after fending off 13 shots.

KEENE — Eighth-grader Hannah Whitney registered her first varsity goals in style with two markers while also tallying an assist in a 4-0 Keene win over Schroon Lake.

Whitney opened the game’s scoring at 28:56 of the first half with the assist from teammate Rachelle Goss.

Then, Katie Waltner, Luiza Paration, and Whitney each scored goals in the second half of play to extend the lead to four.

Keene’s Tucker Geiger played exceptional in net for the Beavers with four saves.

COLTON — Hannah Cook’s one-timer from Alexis Beach proved to be the game-winner in Chateaugay’s 1-0 defeat over Colton-Pierrepont in Northern Soccer League play Thursday.

The two Class D schools played to a scoreless first half, but Beach ripped the contest’s only marker with 17 minutes remaining in regulation.

Chateaugay led the shots on goal category 19-5 and Bulldogs keeper Makayla Fleury made a huge save late in the game to stay on top 1-0.

72, of Plattsburgh, NY passed away October 19, 2020. He was born in Plattsburgh, NY on December 15, 1947, the son of Charles and Rose (Giroux) Daniels. Graveside services will be private at St. Peter's Cemetery.

62, passed away Monday, October 19, 2020 at her home with her loving family by her side. A Mass of Christian Burial later at Our Lady of Victory Church. Arrangements are entrusted to Brown Funeral Home, Plattsburgh.