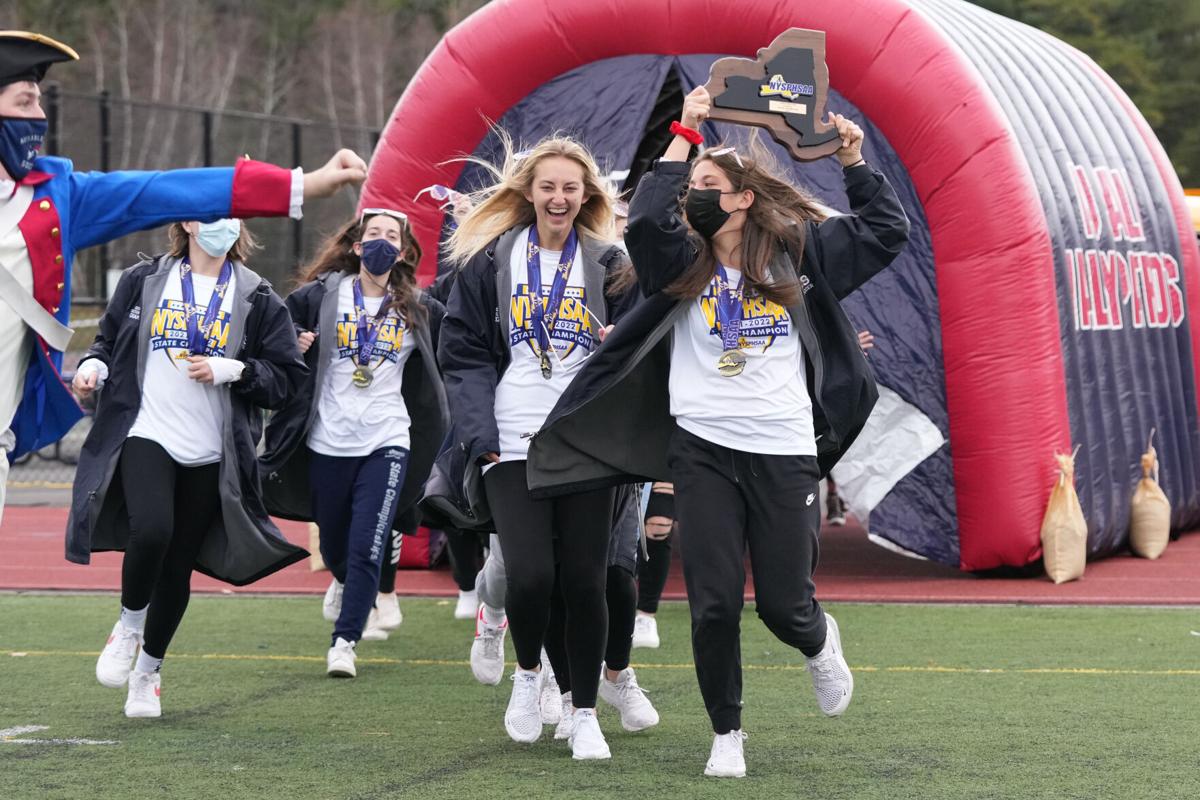 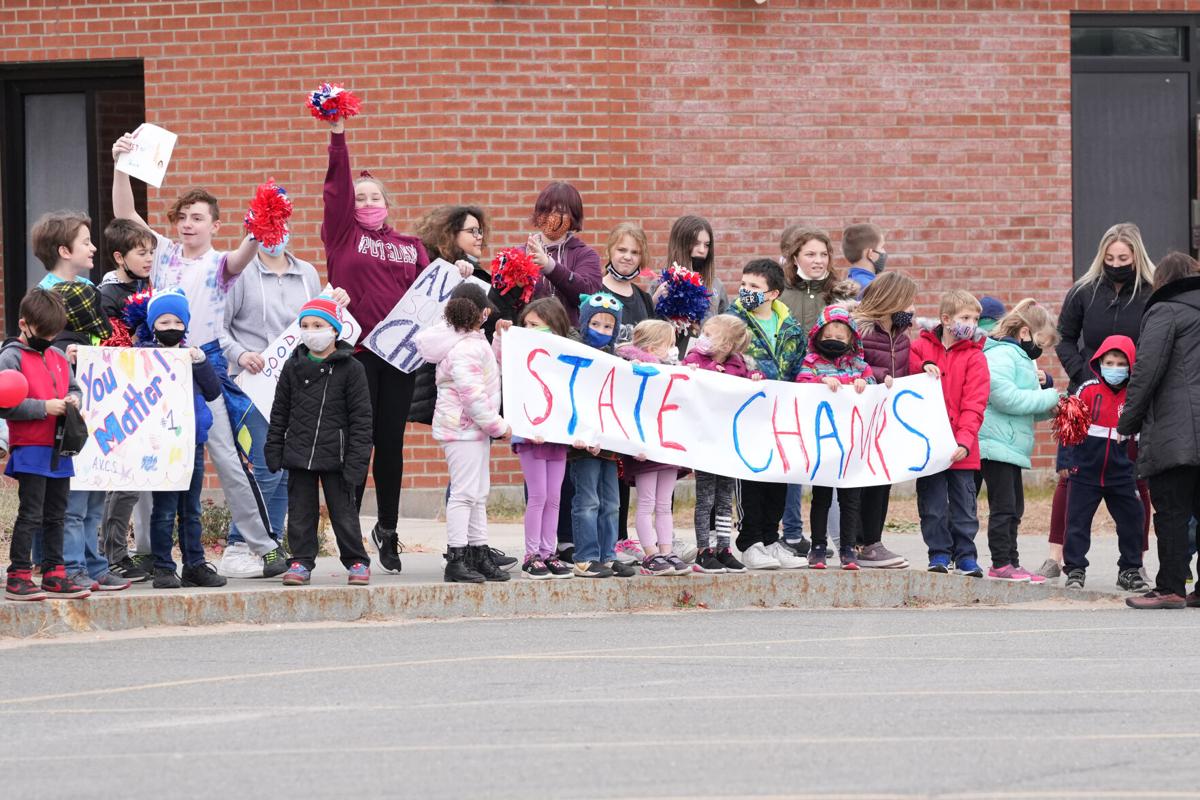 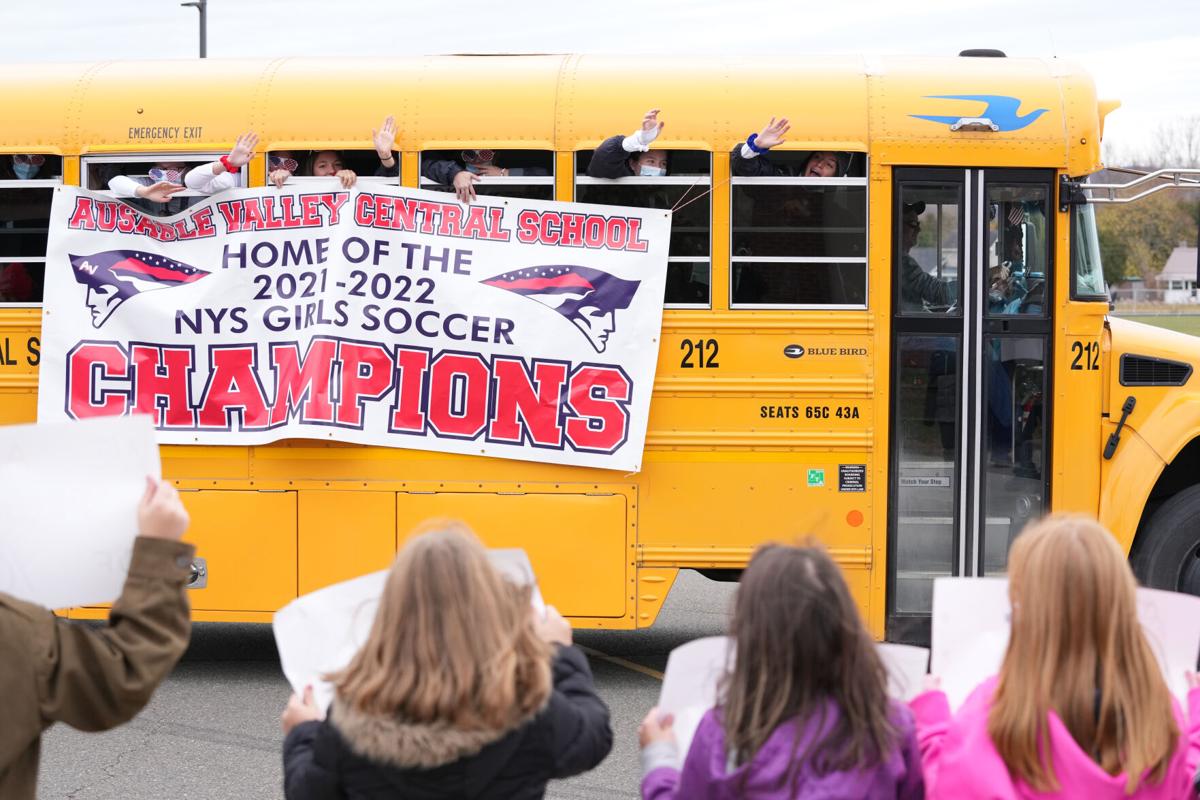 Members of the AuSable Valley girls soccer team wave to Keeseville Elementary students who all came outside to congratulate them during part of the team’s championship celebration on Wednesday. (Joey LaFranca/Staff Photo) 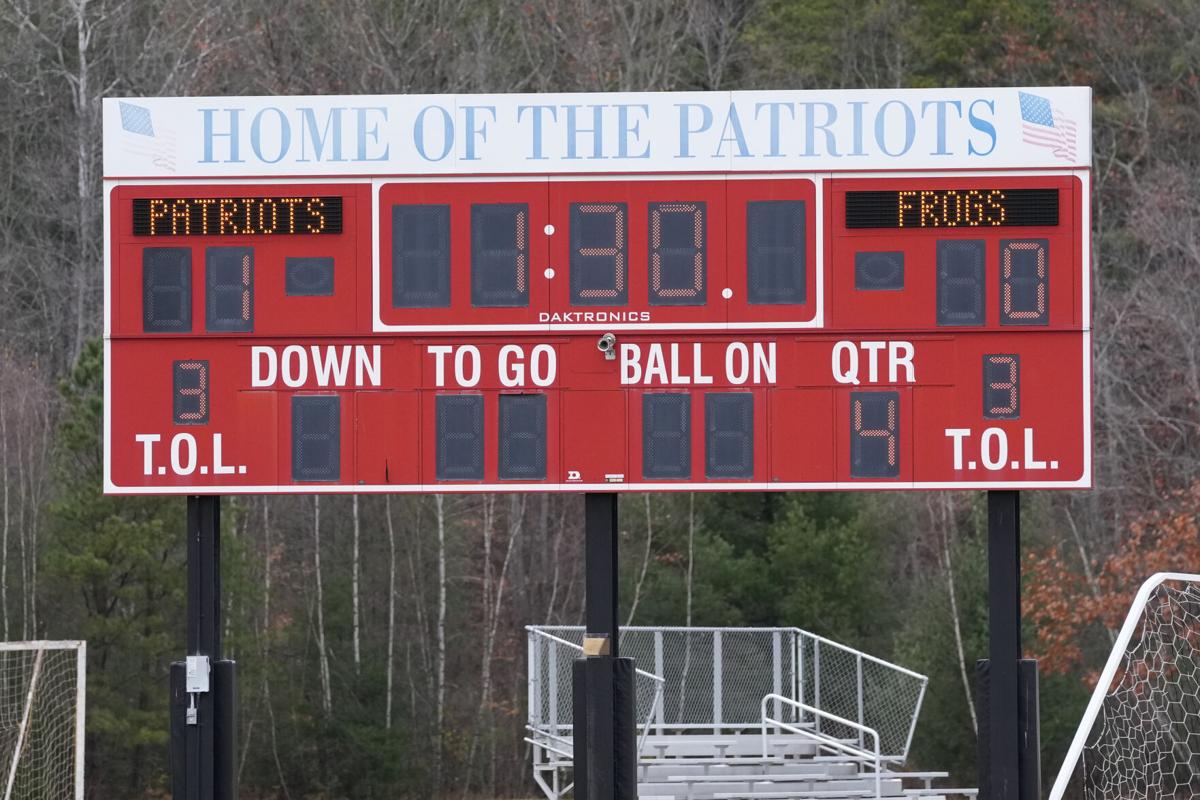 During the championship ceremony, the AuSable Valley scoreboard was lit up with the Patriots ahead 1-0 against the Carle Place Frogs, recreating the moment of Kamryn Bezio’s game-winning goal on Sunday in the NYSPHSAA Class C girls soccer championship. (Joey LaFranca/Staff Photo) 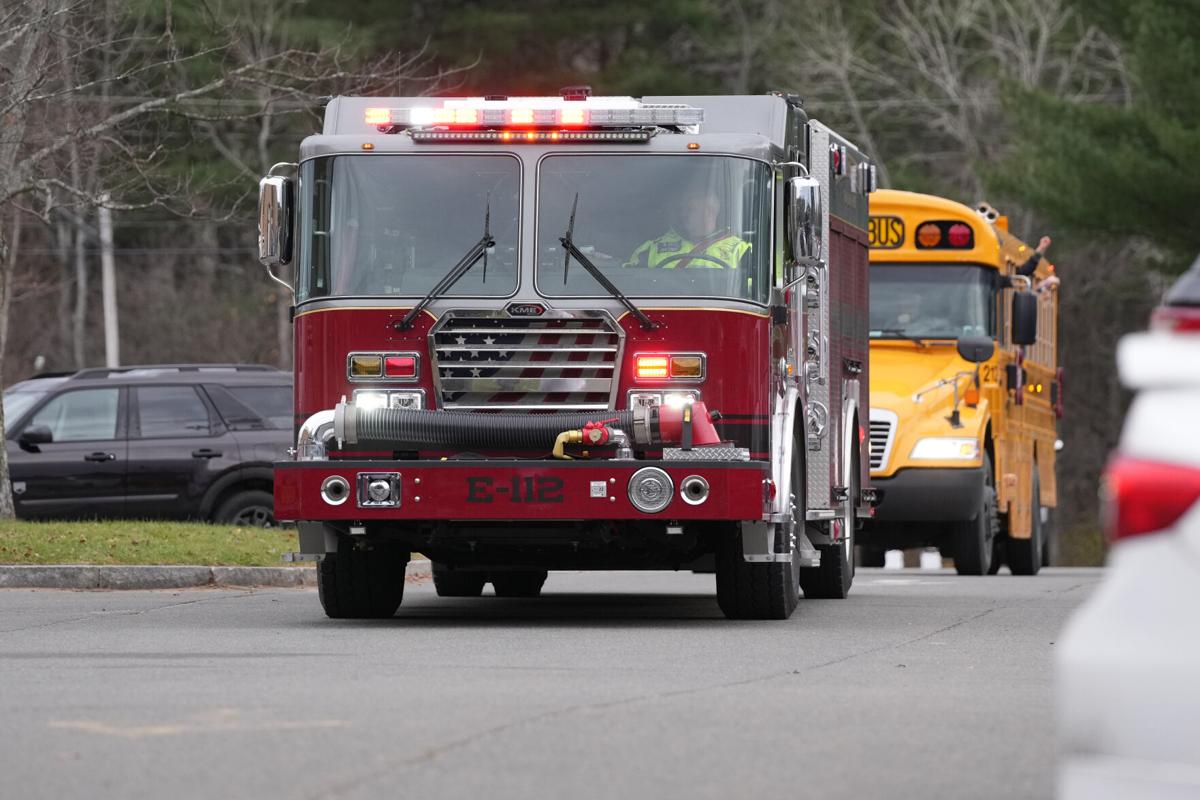 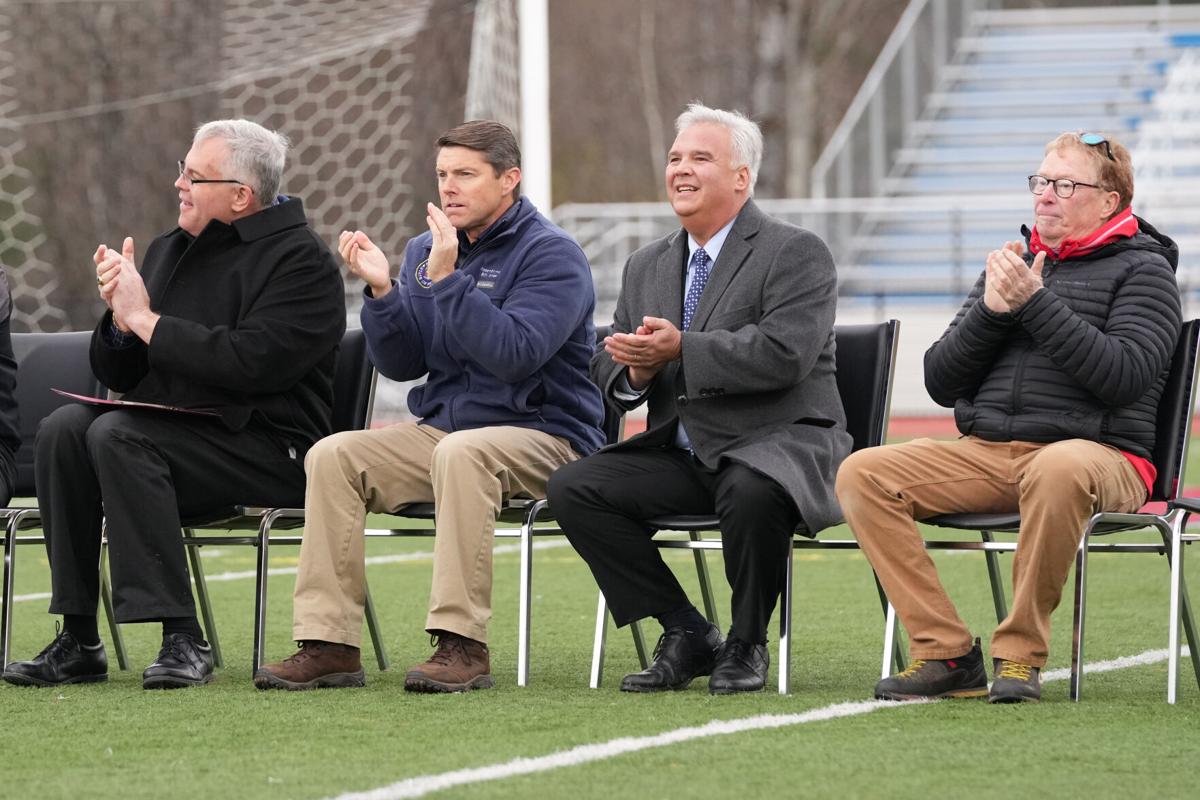 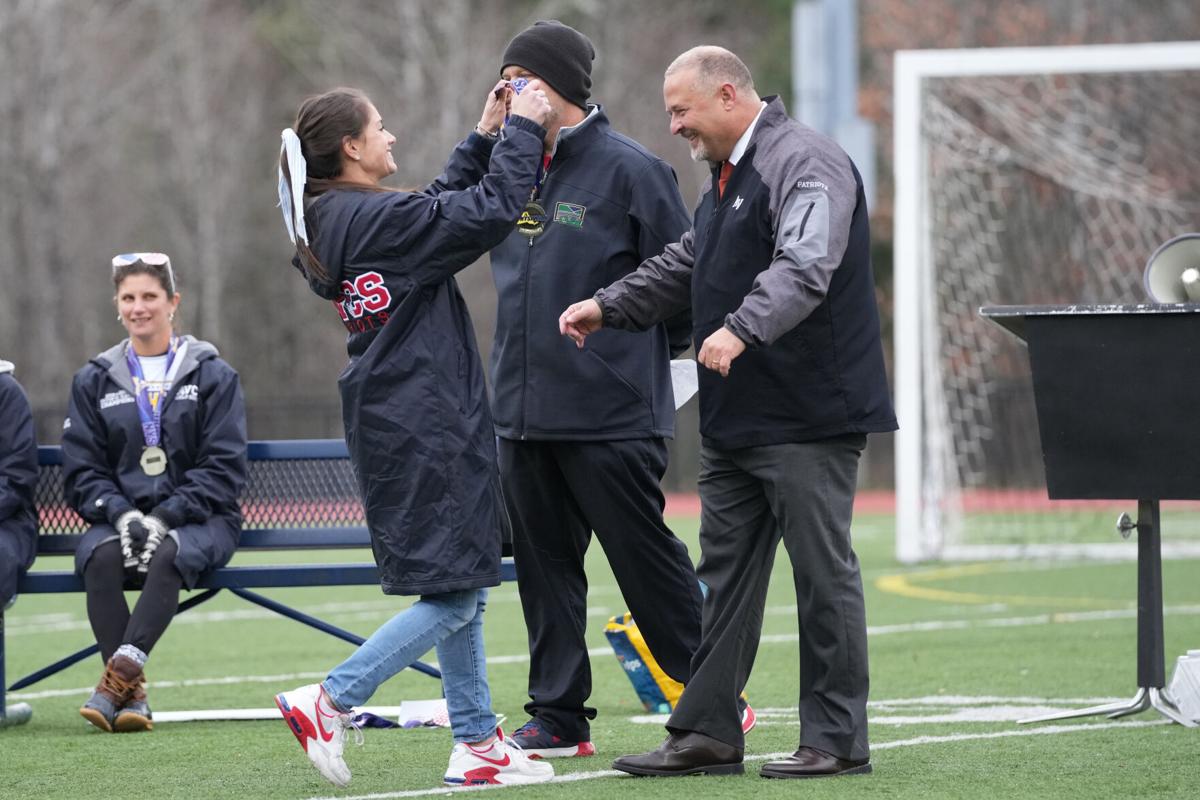 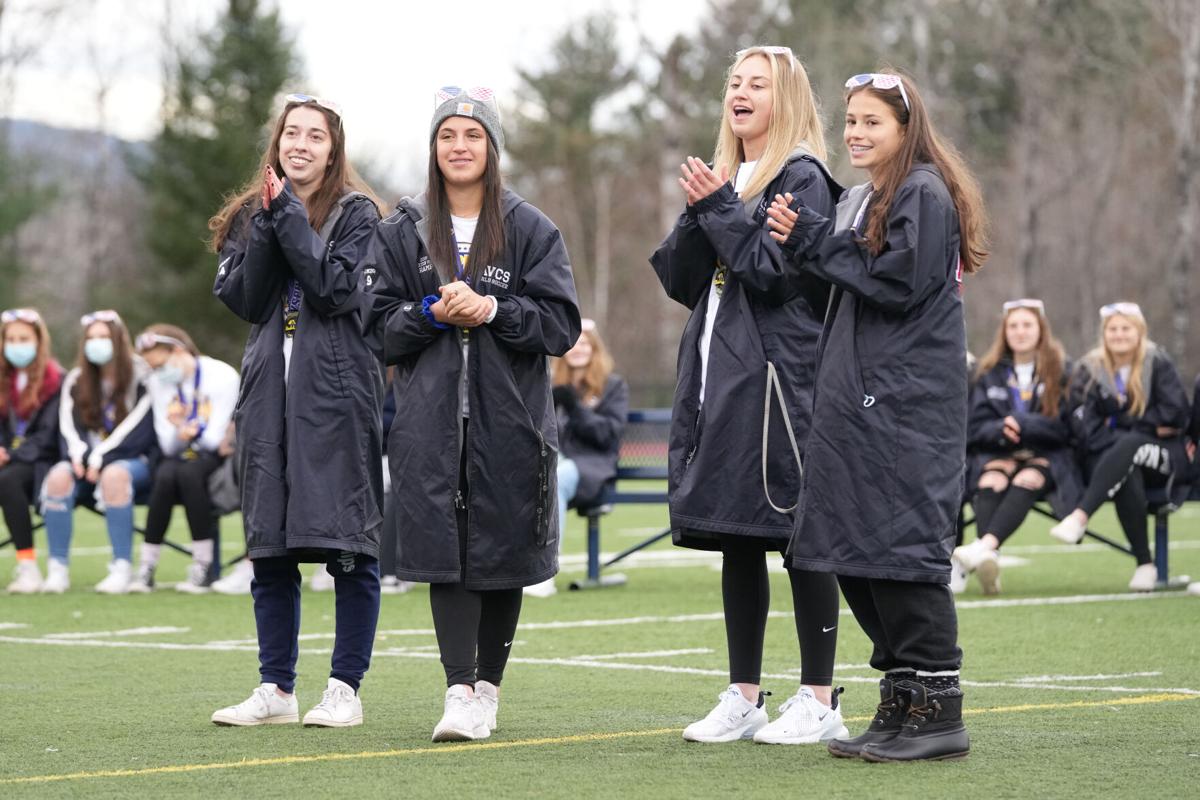 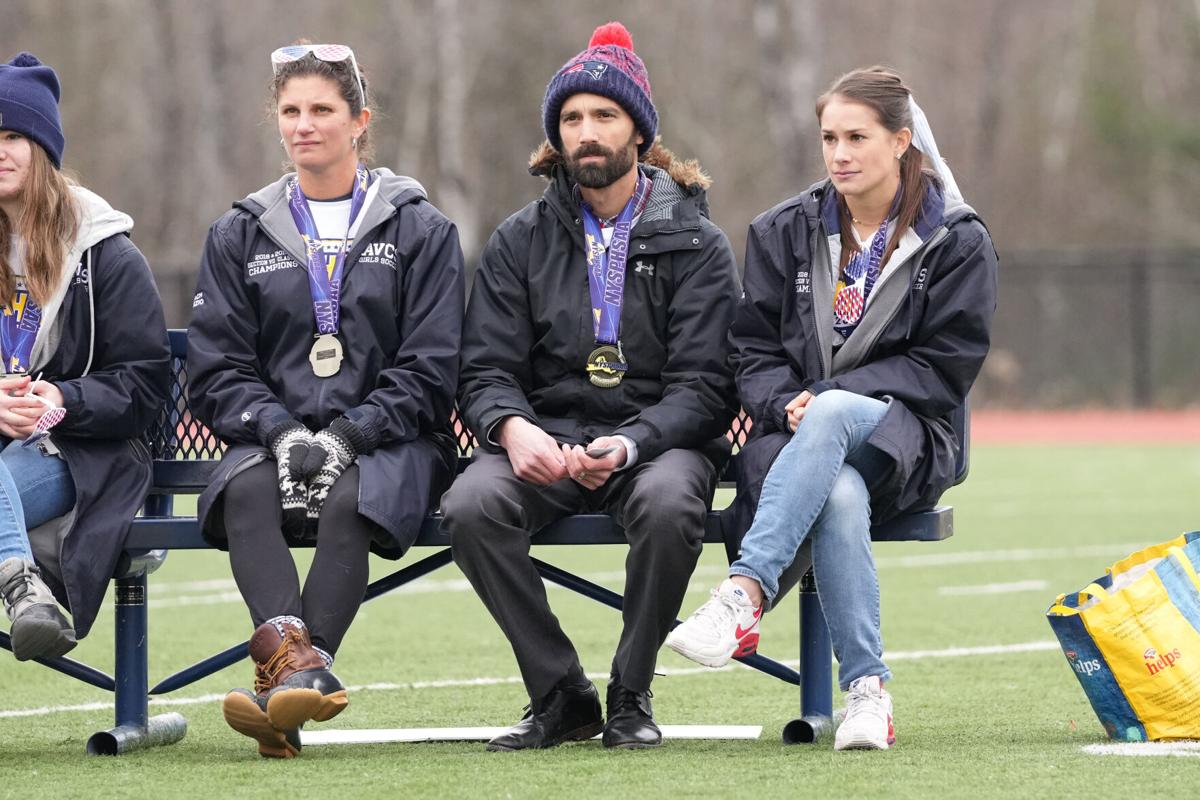 Members of the AuSable Valley girls soccer team wave to Keeseville Elementary students who all came outside to congratulate them during part of the team’s championship celebration on Wednesday. (Joey LaFranca/Staff Photo)

During the championship ceremony, the AuSable Valley scoreboard was lit up with the Patriots ahead 1-0 against the Carle Place Frogs, recreating the moment of Kamryn Bezio’s game-winning goal on Sunday in the NYSPHSAA Class C girls soccer championship. (Joey LaFranca/Staff Photo)

As I sat on the AuSable Valley track Wednesday and listened to the various speeches that were part of a special day to celebrate the girls soccer team’s state championship, I could not help but smile.

I should have known something was special about the Patriots the first time I saw them in action this fall.

It was Oct. 12, and they were hosting Northeastern Clinton on a Tuesday night.

I always try to make sure every local team has a picture in the paper at least once a season, and I felt bad that my schedule had not allowed me to make it to an AuSable Valley girls game until then.

I ended up getting a photo that night, which is now one of my forever favorites.

Raegan Schier scored what turned out to be the game-winning goal and proceeded to jump into the arms of her teammate Jenna Stanley.

The pure happiness of the celebration made for a picture-perfect moment, and that turned out to be one of many celebrations to follow.

A bit more than a month later, AuSable Valley was celebrating its NYSPHSAA Class C title after defeating Carle Place, 1-0, Sunday in Cortland.

Getting the privilege to travel to Central New York to cover the Patriots this past weekend at the final four was a true honor.

I was so happy to be able to tell the story of AuSable Valley’s final steps to its state crown.

Following the Patriots’ 2-0 win against Notre Dame in the semifinals on Saturday, AuSable Valley coach Lindsey Douglas grabbed me by the arm after our postgame interview and said to me, “Joey, I really think we are going to win this.”

That was off the record and not included in my story that night, but something struck me about the way she said that statement.

The look in her eyes and the smile on her face as she spoke to me showed the utmost confidence in her team.

She did not just say her team was going to win as lip service.

Douglas truly meant what she said, and her AuSable Valley squad backed up her beliefs the next day.

Nothing was easy about winning the title, but when Kamryn Bezio found the back of the net with 1:30 remaining in regulation, that was all the Patriots needed.

An AuSable Valley defense that really cranked up its energy level once the playoffs started shut the door and made sure the Patriots brought home that championship.

The team put the cherry on top of its title run by celebrating with its school community as well as family and friends.

The Patriots started the afternoon with a drive-by bus tour to Keeseville and AuSable Forks Elementary schools before arriving back to the AuSable Valley Middle-High School to have a ceremony on the athletic complex field.

During the ceremony, Douglas spoke about how her team’s journey to a state title did not just start this season.

Her speech is what stuck out to me the most because it summarized what I was thinking right after the clock struck zero in the state championship.

This team really had come a long way, and the work ethic of so many is what allowed this all to happen.

AuSable Valley built from the ground up and really started its winning ways in 2018 when the Patriots upset Moriah in penalty kicks to win the Section VII Class C crown.

AuSable Valley repeated as sectional champions in 2019 and then lost the opportunity to compete for sectionals in 2020 due to the COVID-19 pandemic.

In both 2018 and 2019, the Patriots lost in the regional round to the eventual state champion.

Now in 2021, AuSable Valley is the state champion, and that accolade will live on forever.

So as I sat and observed the championship ceremony, I smiled because I know how much this title means to the players, coaches and community.

This was such a fun team to cover, and I congratulate the 2021 AuSable Valley Patriots girls soccer team on a tremendous and memorable journey.

Once you’re a champion, you’re always a champion.