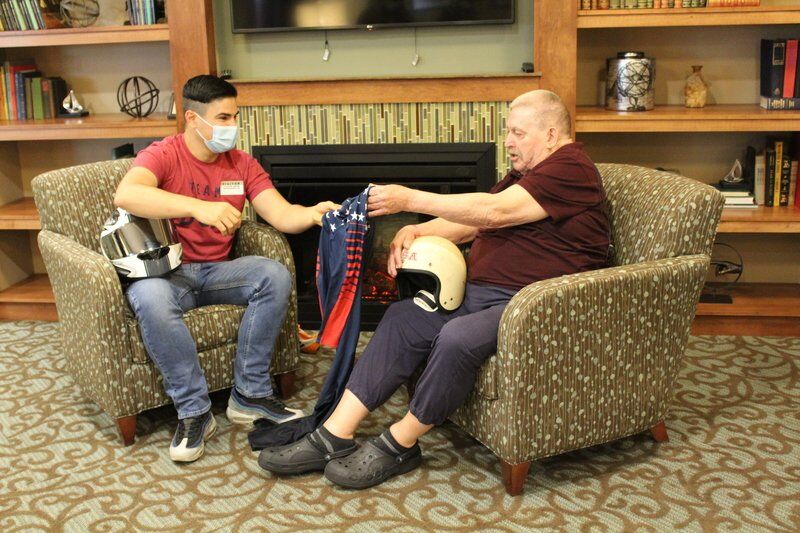 Former Olympic bobsledder Paul Savage, 86, (right) feels how much thinner 24-year-old Hunter Church's aerodynamic suit is than the wool-like ones he and his teammates used in the 1960s. Church, who hopes to pilot one of the United States' four-man bobsledding teams at the 2022 Winter Olympics, met up with Savage at Meadowbrook Healthcare in Plattsburgh Tuesday. (Cara Chapman/Staff Photo) 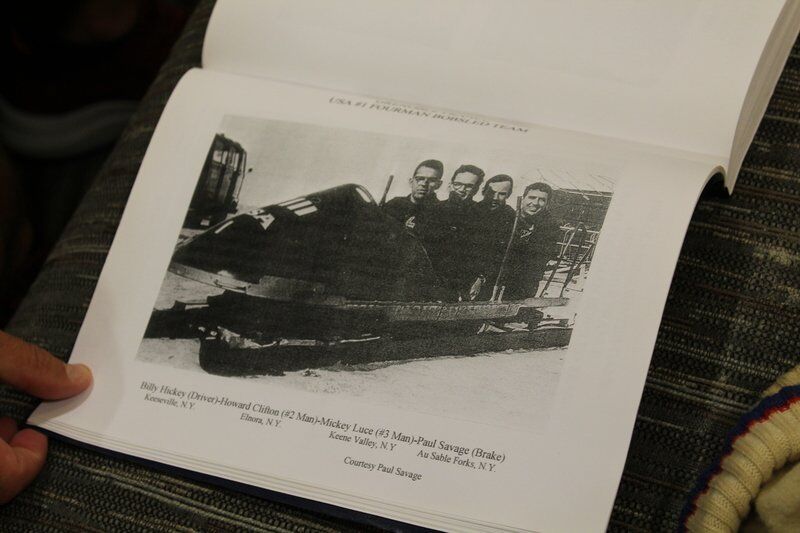 Former Olympic bobsledder Paul Savage, 86, (right) feels how much thinner 24-year-old Hunter Church's aerodynamic suit is than the wool-like ones he and his teammates used in the 1960s. Church, who hopes to pilot one of the United States' four-man bobsledding teams at the 2022 Winter Olympics, met up with Savage at Meadowbrook Healthcare in Plattsburgh Tuesday. (Cara Chapman/Staff Photo)

That’s the advice AuSable Forks native Paul Savage, a member of the 1964 and 1968 U.S. Olympic bobsled teams, gave Hunter Church, who hopes to pilot one of the four-man teams in the 2022 Winter Olympics in Beijing.

The pair met up at Meadowbrook Healthcare, where Savage lives, Tuesday afternoon.

“No, I think I’m already halfway there,” Church, 24, from Cadyville, replied. “I don’t drink or smoke so I’m on the right path.

“I agree, that is some great advice.”

The pair discussed how the sport has and hasn’t changed since the 1960s, and traded names of other North Country bobsledders, including some of Church’s family members.

As brakeman, Savage pushed the longest and was the last one to jump in the sled. His position, Church said, is the most important on the team.

"If there's no push, there's no medal," he added. "Everything that brakemen do for us, it makes the job of a pilot that much easier."

The elder Savage traveled to the 1964 Olympics in Austria as an alternate, his son said. Four years later, he and his teammates placed 15th in Grenoble, France.

“If I could make two Olympics like you, it’d be a blessing,” Church told him.

Savage recalled feeling proud to compete at the Olympics.

“It’s something not everybody has done before and it just makes you feel good to be a part of it.”

He also agreed with his son that the competition at the games was more intense than what came before.

Church, whose team took bronze at the World Cup in January 2020, said training for the Olympics comes with more excitement as things get closer. He thinks he thrives under a little bit of pressure.

"Just the opportunity, like Mr. Savage said, to have this incredible pride of representing my country and knowing that I’m doing all the right things along the way to get there.

Church said his favorite places where bobsledding has brought him are La Plagne in the French Alps and Innsbruck, Austria.

But he agreed with Savage that St. Moritz in Switzerland — which, Church said, is the only natural track left in the world — is also up there.

“I think it’s the bobsled cliché because everybody says they love St. Moritz, and it sounds like nothing’s changed either,” Church said.

Church shared that a lot of his teammates have scars on their shoulders from ice burns. He pulled out his skintight suit, a far cry from the thick, wool-like uniform Savage and his teammates wore.

“Feel how thin that is,” Church said.

Church explained that bobsledders want to be as aerodynamic as they can, but that the suits don’t offer much protection when they come into contact with ice.

In the bitter cold, he and his teammates keep their jackets on until they are told the track is clear, then try to put extra layers back on once they reach the bottom of the track after a run.

“Especially in Lake Placid when it gets down to negative 20," Church said.

Throughout the rest of the summer, Church and his team will focus on sprinting, push testing and weight lifting.

In October, they will head to China to test out the new Olympic track, thereafter remaining on ice for various competitions in Austria, Germany and Switzerland until February.

Church explained that he qualified for the 2018 Olympics as part of the third U.S. sled.

“But this will be my first Olympics where I will position myself so that I am the one competing there.”

Savage II pointed out that AuSable was home for several Olympians, and said it was nice to see Church carrying on the tradition.

Church hopes to inspire more local bobsledders in the future.

“Hopefully, when I’m ready to hang it up and, you know, my helmet’s on the shelf one day, that’ll be my job, too, is to get more people from this area in bobsledding.”

Church said it was an absolute pleasure to meet former Olympian Savage and that, for him, the sport is also about everyone who came before him.

"So to meet Mr. Savage here is pretty cool. There’s another bobsledder of the old that I can carry with me into —"

“What do you mean old?” Savage said, to laughs.