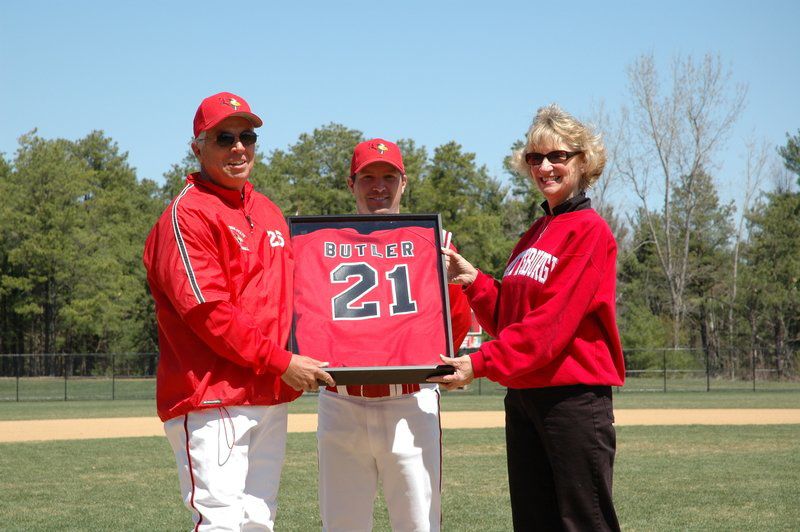 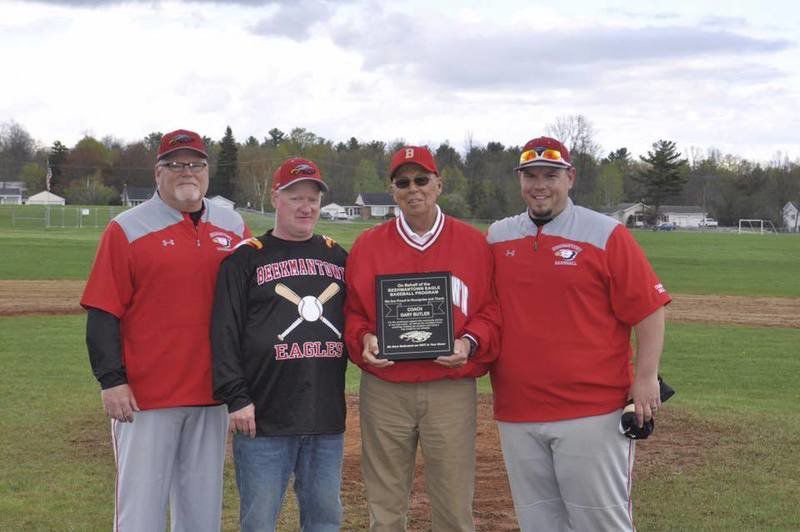 PHOTO PROVIDEDFrom left to right, Pete Williams, Greg Myers, Gary Butler and Eric Bell pose for a photo on the day Butler was honored on Beekmantown's Gary Butler Day on May 6, 2017. 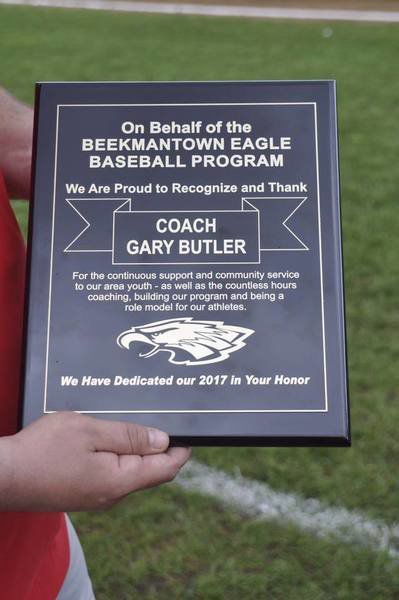 PHOTO PROVIDEDFrom left to right, Pete Williams, Greg Myers, Gary Butler and Eric Bell pose for a photo on the day Butler was honored on Beekmantown's Gary Butler Day on May 6, 2017.

PLATTSBURGH — At times, a great coach and even better person aren't synonymous with one another.

But, with Gary Butler, they went hand in hand.

Butler succumbed to a long battle with cancer and passed away on Wednesday at the age of 79, leaving behind a North Country sports legacy.

From 2006 on, he served as a volunteer coach for Kris Doorey's Plattsburgh State baseball team.

"He was here as much as he could be in his later years, he would take notes at practice and talk to the coaches afterwards. He would always find the positives and have a pat on the backs for our kids. He made them feel needed and wanted."

The Cardinals appreciated Butler's presence at team events as much as Butler appreciated the game of baseball.

"This was an escape for him for what he was going through with his illness," Doorey said. "He loved watching our baseball games. As circumstances would have it, however, our season ended up being canceled this year shortly after it started."

A LIFE OF SPORTS

Butler's distinguished sports career began as a standout athlete at Mount Assumption Institute in Plattsburgh, a short stay at the University of Vermont, a storied playing career at Plattsburgh State, and a long coaching career in baseball and football at Beekmantown Central School.

"Football was actually his love," Doorey said. "He got a scholarship to play Division I football at the University of Vermont in the Yankee Conference. He played one year there on the freshmen team and did well as a running back. Back then, you had to play a year on the freshmen team before moving to varsity."

Eventually, Butler went back to where his roots were and enrolled at Plattsburgh State.

Butler was a three-year starter on the baseball team from 1962-64 and was the team captain and MVP in 1964.

As a pitcher, his 152 career strikeouts are still a school record.

"Coach Butler had never played soccer before, but he also played on the Plattsburgh State soccer team from 1961-63," Doorey said.

Butler was later inducted into the college's Sports Hall of Fame in 2006.

He was also on the Eagles' varsity football coaching staff for a number of years and also served as a guidance counselor at the school.

"Coach Butler was one of a kind," Bell said. "He had a heart of gold and cared deeply about the well-being of everyone he knew. He was a great coach and an even better man. I was fortunate to get to know him as one of his players because he became a lifelong mentor and friend of mine."

Butler was more than just a coach. He was a person who cared for all the people he crossed paths with.

"He was always there to listen, support and guide no matter when you called or stopped by his house," Bell said. "He had an infectious smile and a brilliant baseball mind. In our many conversations about coaching and life, his passion for supporting kids and their development as people overshadowed winning."

The Beekmantown baseball program held Gary Butler Day on May 6, 2017.

A ceremony was held and Butler was presented a plaque and gifts from the team. He also threw out the first pitch of the game.

"To anyone who was lucky enough to know Coach Butler, he was so much more than just a coach or counselor," Bell said. "He was one of the nicest and most honest influential people."

Butler was also a Major League baseball scout for over 20 years with the New York Mets, Pittsburgh Pirates and Montreal Expos.

His passion for baseball and everything else he did impacted so many others.

"I may never have returned to Plattsburgh when they brought back the baseball program if it wasn't for Coach Butler and Mr. (Robert) Garrow," Doorey said.

"Coach Butler was one of the biggest supporters at the college and made many donations. He had a vast knowledge of baseball, and he represented a different time frame in the sport. Our kids loved to hear his stories, and our players looked up to him."

71, of Morrisonville, passed away, July 8, 2020 at her home. She was born August 7, 1948, daughter of Raymond and Belena (Mesec) LaPan. Arrangements are private and under the care of the R.W. Walker Funeral Home, Plattsburgh.