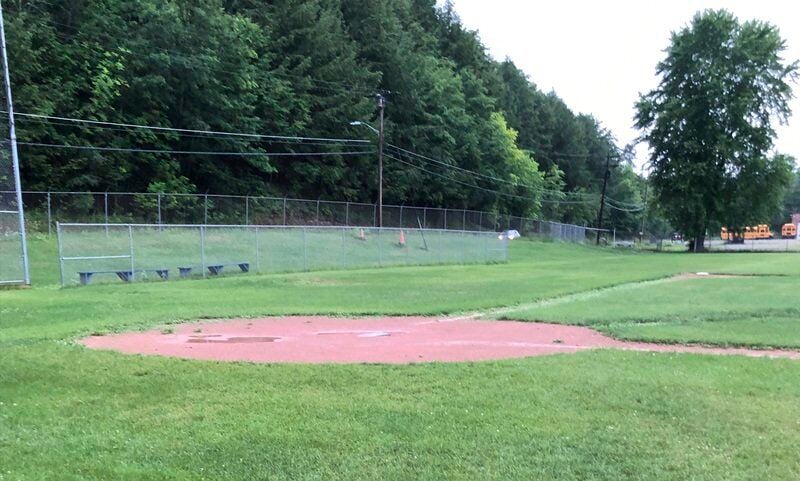 Plenty of fundraising efforts are in place for the AuSable Forks baseball field. (Photo Provided) 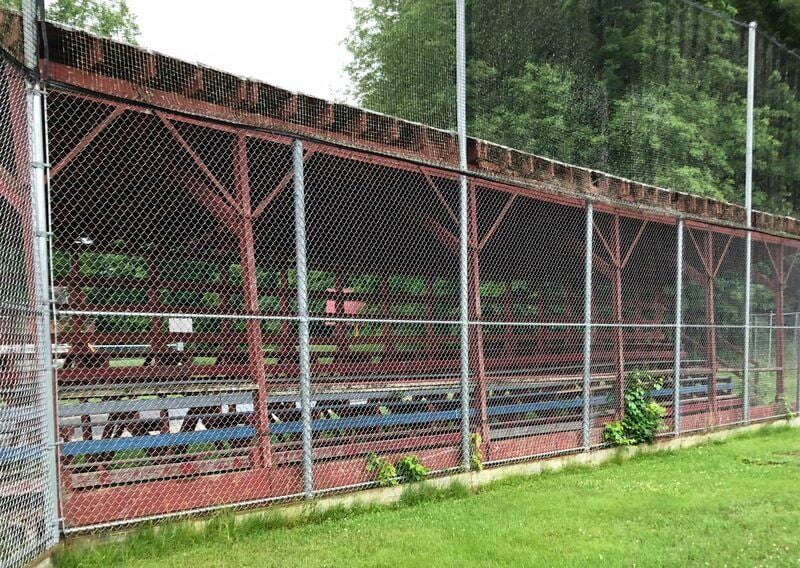 The bleachers at the AuSable Forks baseball field are one of its best nostalgic features many talk about. (Photo provided)

Plenty of fundraising efforts are in place for the AuSable Forks baseball field. (Photo Provided)

The bleachers at the AuSable Forks baseball field are one of its best nostalgic features many talk about. (Photo provided)

“We are grateful that Superintendent Paul Savage, the School Board of Education, and Athletic Director Kevin Hulbert have allowed us this opportunity to raise funds to improve the baseball facilities,” Douglas said.

Overall plans for improvements include a new metal roof on the historic bleachers along with the replacement of some of the wooden material also on the bleachers. Also, new metal players benches with back supports with possible dugouts, a new flag pole and an electric scoreboard are in the plans.

Two years ago, a group of friends who play cornhole regularly, Kevin McCallister, Cory Hanf, Javier Perez and Douglas decided to host a cornhole tournament to begin the process of fundraising for field improvements.

The tournament was a huge success, and funds raised were used to supply the paint for McCallister (Adirondack House Painting) who donated his time to paint the equipment storage facility known as the shack in AuSable Valley school colors.

Also a new "Home of the Patriots" sign was purchased and placed at the facility.

In 2020, all fundraising plans were canceled due to the pandemic.

In 2021, the second annual cornhole tournament will take place on Saturday, Aug. 21, in Au Sable Forks.

Each team entry is $40. Also, a Go Fund Me page has been set up for anyone to donate to the field improvements (GoFundMe.com/f/upgrades-AVCS-baseball-facilities-Au-sable-forks), or people may send a check made out to the AuSable Valley Booster Club and in the memo please write “Donation for Baseball Program”.

Checks can be mailed to Randy Douglas at 31 Aspen Lane, Jay, N.Y. 12941. Douglas in his approach to raise funds has reached out to past AuSable Forks High School, AVCS, and former members from the AuSable Forks Spirits, a powerhouse, perennial championship team in the 1970s and 1980s in the CVBL.

“We’re certainly hoping that we can raise the funds needed for these improvements to our baseball facilities, and we highly encourage any and all past players and fans to contribute if they can financially do so," Douglas said. "We will graciously accept any amount of a donation to help us reach our goal."

Memories From The Field

"Growing up in AuSable Forks right across from the baseball field brings back so many great memories of what makes our local towns and communities so special. Sometimes in life there are those certain places/locations that can bring a community closer together and they become an integral part of the community.

"The AuSable Forks baseball field has been that special place for so many generations of our families including my very own. From watching my dad play in the CVBL into his mid-40s; my spending just about every single day on the ball field with friends and teammates; to watching my own children have the opportunity to play and grow up on that very same field; it’s always been a special place and a field that is near and dear to the heart of so many in our community.

"For many of us, it brings us back to a wonderful time of just being a kid where the only thing that mattered at that very moment was what time it was going to get dark and what game we would be playing based on those who showed up to the field. That was life growing up for many of us in our small towns and why baseball wasn’t just a game but it was an event where all people could come together to socialize and to be a kid again.

"Those big red bleachers are truly historic to our town and are a major part of the identity of the field. They are a connection to the past and to the days of old. As the proud Superintendent of AVCS for the past 16 years, I have been asked about those bleachers and if we should be looking at a newer version. My statement has always been – sometimes newer isn’t always better and in this case – it definitely isn’t.  The old bleachers have a lot of life left in them and just need a little extra care and why this fundraiser is so invaluable to keeping them alive for generations to come. We really appreciate the efforts of this fundraising group spearheaded by Randy Douglas and thank the communities for all of the support." — AuSable Valley Superintendent Paul Savage

"Night baseball came to AuSable Forks in the 40s and 50s. Teams like the Indianapolis Clowns and the House of David would bring their own to town and play the great local hometown AuSable Forks Firemen, drawing over 1,000 people to the game. I was lucky enough to be one of the batboys. We rotated that job so everyone got a chance. My favorite saying is, "Yes Virginia, there is a Santa Claus, may there be one forever. So yes AuSable Forks, there is a baseball diamond, and may there be one forever." — Tim Snow

"We don't realize how rooted we are where we grew up until you start thinking back about where you've been. As far back as I can remember, which is a long way, the baseball field on Rome/Church Street has always been a part of my life. When I was young, my friends and I were always there as baseball was not only the National Pastime but the game has always been AuSable Forks' National game. I grew up on College Street across from the funeral home and the Graves Mansion but more importantly kitty corner to the baseball fields conveniently within walking or bike riding distance to the field.

"My friends Bobby Meconi, David Ghiloni, Marco Lanzoni and many others would meet at the ball field every day. The kids from the other part of town would show up, and we'd choose teams. If we didn't have enough kids to play, we'd play up against the screen, hours and hours at a time until someone showed up to play a real game. We had a Wiffle Ball league using the bleachers that ran alongside the road as the bleachers of Yankee Stadium. Every bike had a glove hanging from the handlebars and our baseballs were taped with electrical tape and our bats, usually hand-me-downs from the local town team, were also taped because not many of us had new equipment.

"Everybody wanted to be Mickey Mantle or Willie Mays. Mickey Mantle was my hero, and when I played, I was number seven. I was disappointed when I played town team baseball and we got uniforms that Tom Hackett was number seven. Could not argue with that logic. I settled for number two, but wore seven in the fast pitch league. Now that Tommy is a golfer, I guess the number is mine. Four or five weeks during the summer, the local youth commission would have Little League teams, but we weren't very far from the ballfield as the local playground was held there.

"I can remember watching the local town team play on Sundays in the 70s when I was playing with the Spirits I marveled at the size of the crowds in the stands and in the bleachers. Bob Kyea told me one particularly hot day, that the beer in the bleachers was so cold that it hurt his eye teeth. Lyon Mountain, Peru and the Redford River Rats loved to come to AuSable. Some great players played there during my time with the Spirits, the aforementioned Tommy Hackett, Gary Barber, Tom Kowalaski, the four Duprey brothers from Peru and many other local legends of the diamonds.

"I spent many hours working on that field and the bleachers and a significant amount of my life has been spent there. I watched my son play his high school baseball career there, and now I watch him help coach the AuSable Valley baseball team. That field and the game of baseball was a picture of AuSable Forks and many other towns like ours, back before our lives became so complicated and we had so many options. Most of the town knew where they would be on a Sunday afternoon. It's important to preserve it and keep it for the next generations as it reflects on a happier time in our town's history and it wouldn't be all that bad if we returned to those times occasionally, like Sunday afternoons?" — Scott Bombard

“Although I am not as aware of the history of baseball and softball in the AuSable area as some people, I do know that when facilities are updated and attractive, that brings about a sense of pride that excites kids. I look forward to recruiting kids to play this wonderful sport of baseball here in the Valley." — Kevin Hulbert.

"As a player in CVBL, I loved playing and pitching in AuSable Forks in front of crowds in the 1,000s in the mid-70s. I then coached varsity baseball at AuSable Valley in the 90s, and the field was one of the best in the CVAC. It's time to put some money into the field, so let's help coach Randy Douglas raise some money for needed repairs to keep it one of the best fields around." — John Zerrahn

"It's a unique field for a number of reasons and my memories of playing there will always warm my heart. The first is the infield grass can be a challenge to play early in the year as the field is soft and the ball can take many interesting bounces, and as it hardens, it becomes astro turf fast and very true.

"The second unusual aspect of the field is the hill across the road creates an echo effect as the sounds of the fans bounce off the hill and back on the field amplifying the roars of the crowds when you make a great defensive play or get a timely hit. Back in the Spirits days, we played in front of huge crowds, and it was very special. Finally the bleachers behind home plate kept the fans very involved in the games. It also gave us a special place to play a game called Against the Screen.

"Can't explain the game in its entirety, but it had to do with hitting the ball against the face of the bleachers as a way of scoring runs. We played for hours, and it was a huge part of our growing up. Finally it was the place we all got together the year they came out with draft numbers for military service. Twenty of us sat there with a transistor radio and waited for our birthday to be called to see what number we would be in the draft for Vietnam. I was lucky. There were 258 others that were not so much." — Bob Meconi