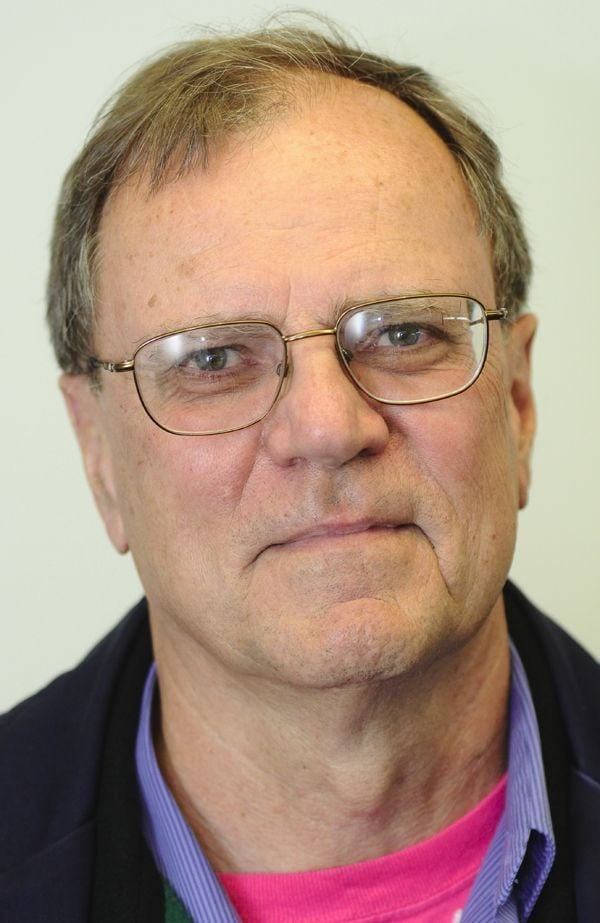 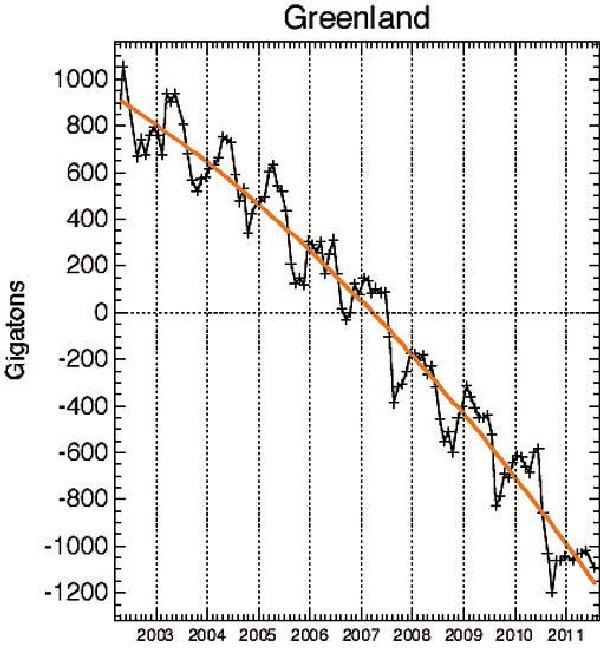 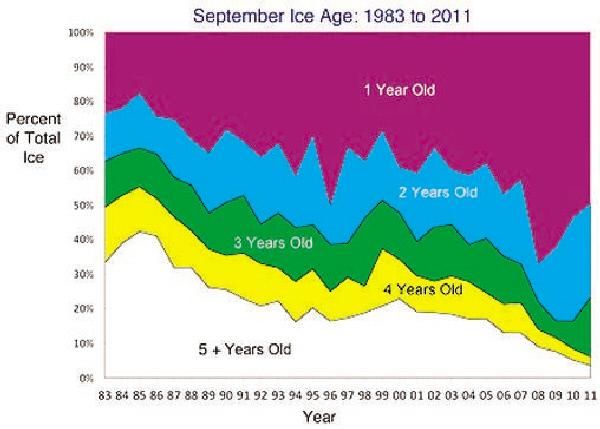 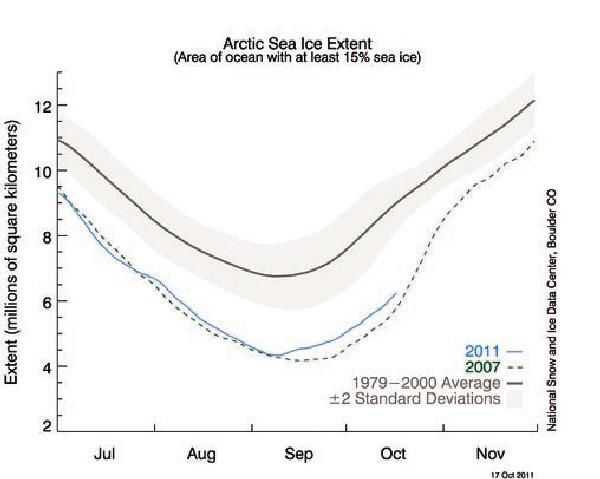 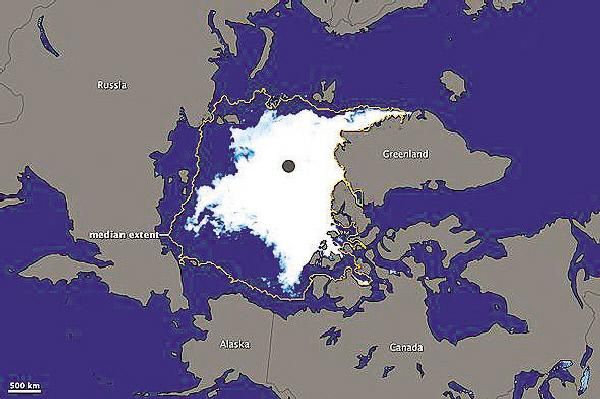 Extra! Extra! Read all about it!

Sound a bit like a street-corner scene from an old movie with a youngster selling newspapers with a large, important headline? Today, the topic that should be in our headlines, but isn't, is climate change. Some new data gives us a view of some startling changes that are occurring in the Arctic right now.

When we talk about the Arctic, let's remember it is an ocean that is surrounded by land. (This is in contrast to the Antarctic, which is land surrounded by ocean.) The North Polar map, with the Pole designated by the black dot in the center, shows minimum sea-ice extent in early September 2011. The larger ring marked "median extent" is the amount of ice for the 1979 to 2000 base period for this date.

This map and data can be accessed at the National Snow and Ice Data Center website.

The white area shown here is very close to, but slightly larger than, the lowest ice extent in the satellite record observed in 2007. The near-record ice melt followed higher-than-average summer temperatures, but "the atmospheric and oceanic conditions were not as conducive to ice loss this year," according to Walt Meier, an NSIDC scientist.

September is normally the time when Arctic sea ice reaches its minimum. When the long, warm polar days shorten and temperatures begin to drop, ice extent begins to increase again. It reaches its maximum around April 1 when the melt cycle begins again.

However, there is more to this story than just sea ice extent, and that is ice volume. The satellite data above does not distinguish between ice cover that may be 1 foot thick or 10 feet thick — it is just "ice extent." Ice volume is another important parameter and shows where some of the extra energy or heat that is being trapped by greenhouse gases, primarily carbon dioxide, is going.

Why is ice volume of interest? Let's take a bucket of ice at a temperature of -1 C (or ~ 30 degrees Fahrenheit) and increase its temperature to zero C (32 F). That 1 C increase will take one unit of energy. Now let's take that bucket of ice at zero C and convert it to liquid water at that same temperature: that takes 80 units of energy. We have not changed the temperature of the ice at all, but that phase change, from ice to water, takes 80 times more energy. Therefore, when we have much less ice volume it means there is a lot more energy in the liquid water in the environment.

The chart "September Ice Age: 1983 to 2011" clearly illustrates the loss of multi-year ice (two or more years) and the increase in 1-year-old ice. The Arctic Sea ice is getting thinner and much more susceptible to melting during the summer season. The more water surface formed in the Arctic, the more it absorbs (90 percent) the sun's energy, further amplifying the warming trend.

We have been talking about sea ice in the Arctic, but other changes are also being seen in the amounts of land ice. The graph "Greenland" (NASA satellite data) illustrates the accelerating loss of ice in the huge ice sheet resting on land. More than 2,000 gigatons (2,000 billion tons) of ice have been lost there in less than a decade.

This decline of Arctic Sea ice and Greenland's ice sheet are some of the clearest signs that human-caused climate impacts are coming faster than expected.

The fact that we are now seeing extreme precipitation events, severe droughts, increased tornado frequency and record-setting land temperatures is most likely a reflection of those changes. 2011 has set a record in insurance losses, according to the re-insurance giant Munich Re, with 10 events costing more than a billion dollars each.