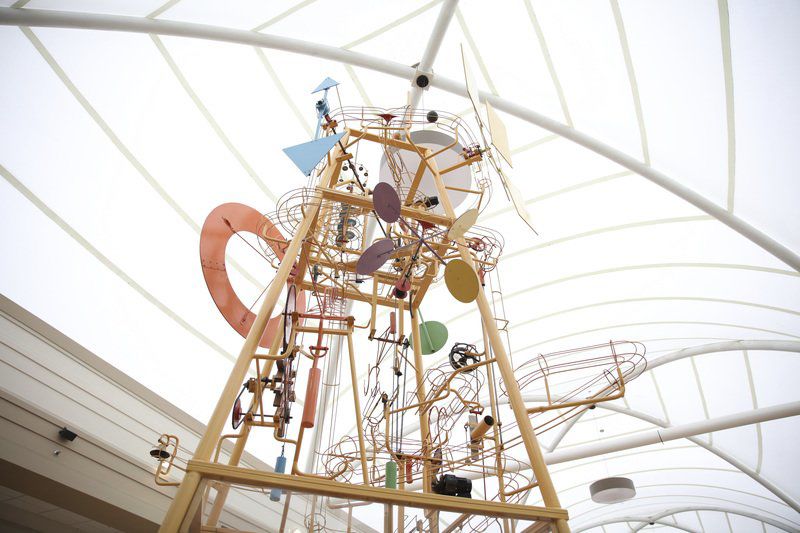 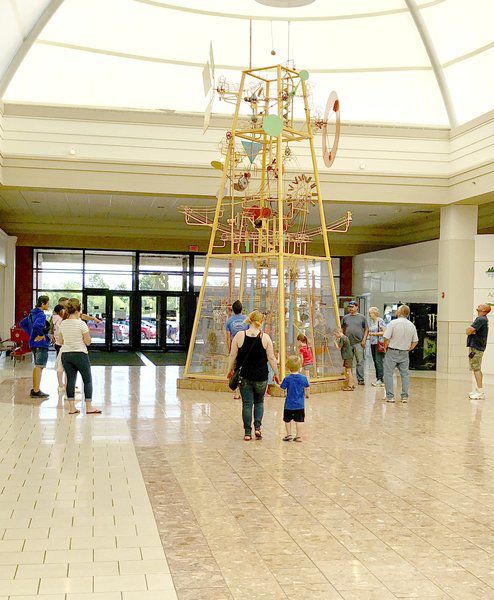 Every child of the North Country knows the Ball Machine. I’m referring of course to the towering structure of billiard balls moving along colorful metal tracks that has stood in the center court of the Champlain Centre mall since it opened, as Champlain Centres North, in 1987.

In 2019, the billiard balls inside it, blackened by decades of grime and ceaseless wear, are still rolling. The motors and bicycle chains are still turning and hoisting. Dark, thirty-year-old grease has spread everywhere. Paint has worn off the tracks. And yet, it’s still going—one constant when so much else in the mall, in Plattsburgh, and in life, seem to have changed. It has outlived Sears. Decades after the last waft from the Original Cookie Company has faded from the mall air, the Ball Machine endures.

And it still captivates children — just watch them. It has lost none of its original power to do that. It still has something akin to a campfire’s power to transfix us grownups, too. When I last saw it, children stood around it when I first passed, and two adults in their late forties stood there when I left. But, over the decades, any frequent mall patron has likely grown so used to the Ball Machine that he or she barely sees or hears it anymore. It has simply always been there.

A POINT OF REFERENCE

The Ball Machine is the work of artist George Rhoads, who will turn 94 in January. It’s an example of what’s called “kinetic art,” “audiokinetic art,” “kinetic sculpture,” or, more specifically, a “rolling ball sculpture.” Rhoads’s ball machines are still rolling in malls, schools, public buildings, and museums across the country, including the Philadelphia and Logan airports as well as the Museum of Modern Art and Port Authority Bus Terminal in New York City. No two are the same, but anyone who knows the Plattsburgh Ball Machine will immediately recognize the artist (the closest cousin to ours is at the Museum of Science in Boston).

And those sounds. The mall’s most distinct clarion call was the shrill, single bell that rang when one of the larger balls in the machine’s upper half swung out wide on its first pass along that curved track that stretches overhead and wider than the base of the machine. Then, of course, there was the chromatic run of musical notes that climbed higher as a ball tumbled down the red staircase of hollow metal chimes on the ground floor (always preceded by the “tick tock” of the ball bouncing and landing a few seconds before).

The bells and chimes of that Ball Machine were the decades-long soundtrack to every holiday shopping season and every Easter Bunny or Santa Claus visit. The soundtrack to bands of teenagers wandering the mall because it was the only place to “be” — some of the boys on recon missions to discover taboo wonders lurking in the back of Spencer Gifts, some of the girls shoplifting from Claire’s. The soundtrack to thirty years of North Country men and women who relied on J.C. Penney and Sears for their clothing. The soundtrack to hundreds of thousands of lunch breaks from literally millions of hours clocked by employees of the mall's stores and eateries.

And then there were the whirring, mechanical sounds of the Ball Machine itself. What a roar. It was the sound of balls coursing along metal tracks, smacking into each other, falling and bouncing — that tick tock — from choreographed dives, and colliding airborne into curtains of hanging, wooden planks. What kid forgets the giant wheel of snapping wooden clothespins (now frozen) high above or the whirring of balls racing around that steel drum bowl, a kind of billiard ball speedway, before dropping, one by one, down the drain like water from a tub?

Those sounds — the roaring, racing, and colliding — those were George Rhoads's metaphor for us. Running into people we knew, avoiding others we knew, racing from store to store for last minute holiday gifts, the solo mall-walker alone on her deserted morning track, the Black Friday mobs crowding Service Merchandise, Hills, and Hoyts before they were Gander, Target, and Regal, back when Best Buy was a Green Mountain Coffee, an O’Toole’s, a Tape World, and a different mall entrance. Some of those ball sounds are still there. And some of them, like closed stores, are now just memories and empty tracks.

They represent the shrieks of unruly kids, the silence between tick and tock when care was on our minds, cash registers opening and closing, and the clamor of winter boots on polished tile. Anyone who has ever been in that mall alone knows how ghostly and wrong the Ball Machine sounds when no one is around.

No, I don’t think I’m giving George Rhoads too much credit when I say that that Ball Machine is his artistic and mechanical symbol for our lives both inside and outside the mall. We, too, have our tracks, collisions, races, falls, bounce-backs, and battles with paths, possibilities and spontaneous rebellions.

I will always love the Ball Machine, even if from afar, and I have a particular favorite thing that it does. Due to wear and the machine’s need for a tune up, it now happens once or twice a minute, but it used to be the rarest event of all of the machine’s many marvels and certainly the one that most depended on serendipity to occur. It’s the special moment when a single ball rolled down the tall, mint green spiral in the bottom corner of the machine.

Now, the same issue that’s preventing the billiard balls’ famous fall and bounce is flooding traffic to the green spiral, but if you spend some time figuring out what used to be required for that green spiral ride to happen, you may just feel like you are staring the artist in the eye.

Joe Finckel is a Professor of English at Asnuntuck Community College in Enfield, Conn. He is a proud former employee of both Hoyts Cinemas and Borders Books, Music, and Café in Plattsburgh and a former newspaper carrier for the Press-Republican.

74, of Au Sable Forks, N.Y., passed away at CVPH in Plattsburgh. A Memorial Mass will be held at a later date. Services were entrusted to Thwaits-Zaumetzer Funeral Home.

63, of Au Sable Forks, passed away unexpectedly on March 29, 2020. A private family service will be held at the Thwaits-Zaumetzer Funeral Home, Au Sable Forks.