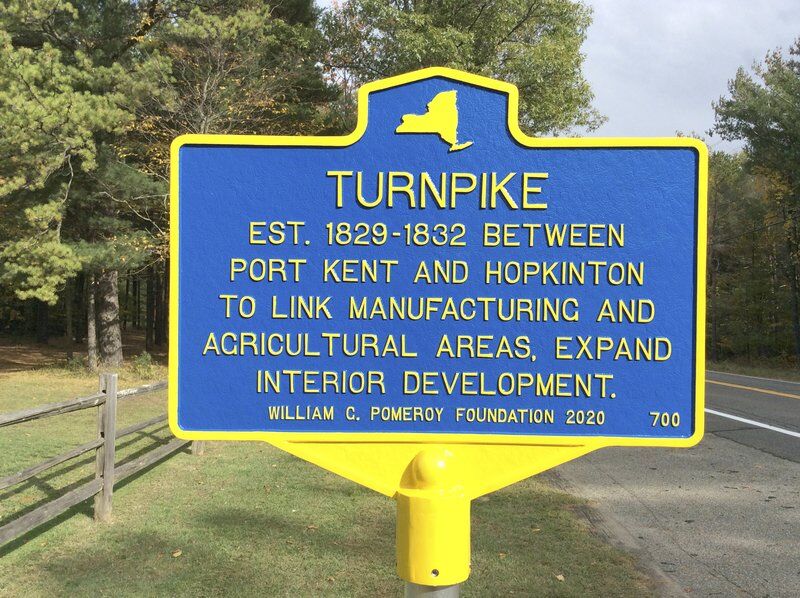 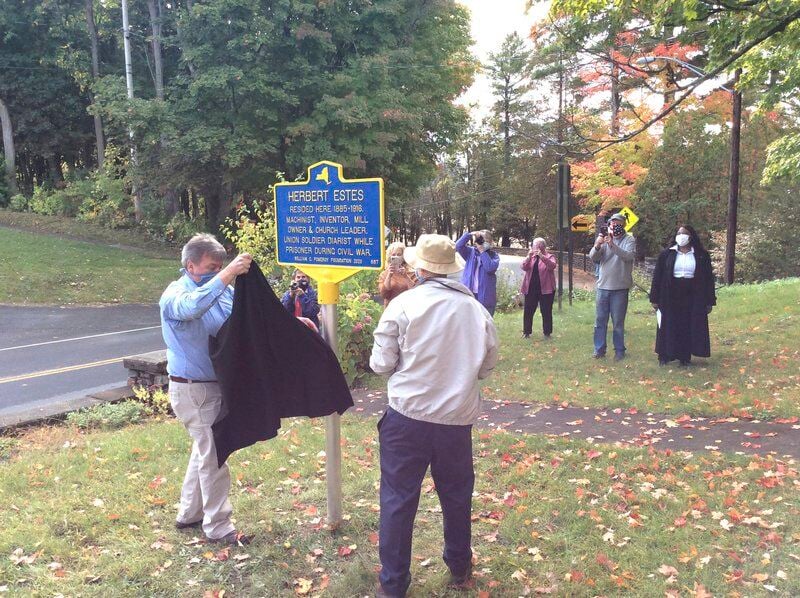 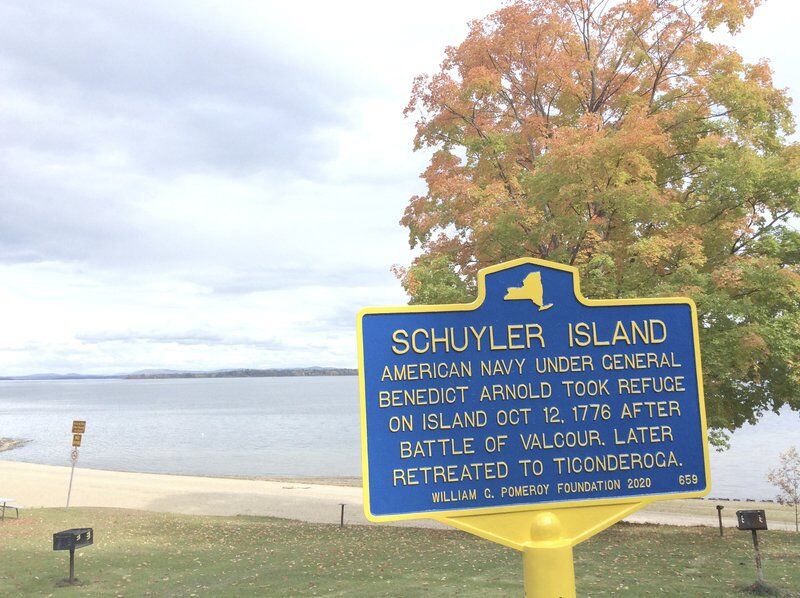 Garth J. Houde, president of the Anderson Falls Historical Society, was the master of ceremonies at Port Douglass Beach for the Schuyler Island marker, 373 Fairway Dr. for the Turnpike marker and 1131 Mace Chasm Rd. for the Herbert Estes marker.

The Society received a grant for the markers from the William G. Pomeroy Foundation.

A PLACE OF REFUGE

On Schuyler Island, Gen. Benedict Arnold, penned an incident report, and the American fleet, as it were, found refuge and the space to repair and scuttle boats, before continuing southward.

It's one of the earliest markers of all the markers that are around,” Smith said.

“Because the big event for Schuyler Island was in the Revolutionary War in 1776. Most of our markers have been for a later time period in the story of AuSable and Chesterfield."

Schuyler Island had a pivotal role as a follow-up to the Battle of Valcour.

“It was on Oct. 11 when Benedict Arnold and the American Navy was on Schuyler Island, and we had the unveiling just the week before," Smith said.

“It really felt authentic to be there at that time. We were very fortunate that the Valcour Battle Chapter of the Sons of the American Revolution had a Color Guard. So we had three representatives in period uniform to stand right in front of the view of the island.”

Schuyler Island is only a mile into Lake Champlain from Port Douglass Beach.

“So, it was just a really special occasion to remember that early part of our history," Smith said.

"And Schuyler Island is not just a Keeseville/Chesterfield memorial but it's part of the national story of the founding of America. So, it has a lot of extra significance.”

The Port Kent-Hopkinton Turnpike, a 75- mile turnpike, linked the manufacturing area in Port Kent to the agricultural region of the St. Lawrence Valley.

A Port Kent native, Houde didn't know much about the turnpike.

“The turnpike was quite important for the economic development of the area,” he said.

The last unveiling was at the former residence of machinist/inventor/mill owner Herbert Estes.

"As a young man, he was employed in Boston in the first horseshoe nail works factory in the country. He enlisted as a private in Company K of the 35th Regiment of the Massachusetts Volunteer Infantry on August 10, 1862."

On September 30, 1864, Estes was taken prisoner and sent to Salisbury, N.C., where he kept a diary while in the Confederate Prison with 6,000 other prisoners of war.

“When asked what the effect 'prison life had had on him, he said, 'When I entered Salisbury I weighed 150 lbs.; a month after I returned home, and had recruited in health a little, I weighed 112 lbs.'”

In 1872, Estes moved to Montreal, Canada, where he was employed for several years at the first horse shoe nail works in Canada operated by the Canada Horse Shoe Nail company.

“Five years later, the company sent him to Ausable Chasm to take charge of the mechanical department of the AuSable Horse Nail Works,” Madison said.

“He was promoted to superintendent and spent 20 years with the company, until ill health forced him to retire. He was an expert machinist."

In 1885, Estes entered into an agreement with the Mooney Company to purchase the parcel of land on which he built his house.

After his retirement from the Horse Nail factory, he purchased the paper mill business at the Chasm which he operated with the assistance of his son, Alfred, until about 1914, when he retired permanently.

“Herbert Estes was a member of the Grand Army of the Republic, local Masonic Lodge, of the AuSable Valley Grange, and an Officer of the Day during Keeseville’s 1915 Memorial Day Ceremonies,” Madison said.

“Mr. Estes was a devout Christian, and a treasured image in the possession of descendants is a photograph of him reading the Bible to his grandsons in the parlor of his home. When he died in 1916, the Grange was in charge of the funeral services, which was held in his home."

“I think they are a source of pride for a lot of people,” he said.

“I know when we did a couple in Clintonville last year, our vice president is from Clintonville. Her name is Liz Smith.

“She was saying in talking with other residents of Clintonville, she was hearing they were quite glad that Clintonville was getting some recognition for its history.”

The markers are a source of pride as well as a source of information for those who take the time to read them, in Houde's estimation.

"The more people know about local history, the more interesting it gets," he said.

“I just think we're very lucky to live in an area that is as historically rich as ours. I think the signs help to let more people know about that.”