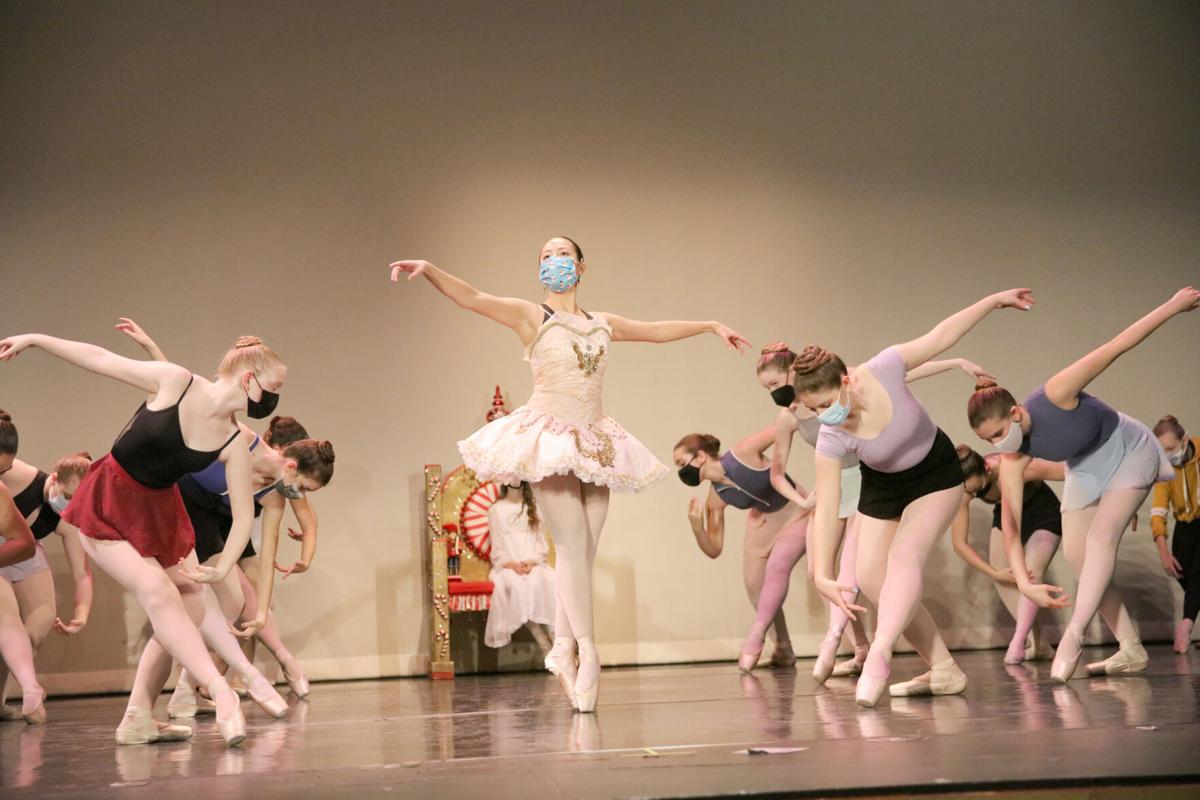 Dew Drop (center, Juliana DeChavez) in Wednesday’s run through of “Nutcracker in a Nutshell,” a co-production of the Lake Placid Center for the Arts and EMERGE 125. 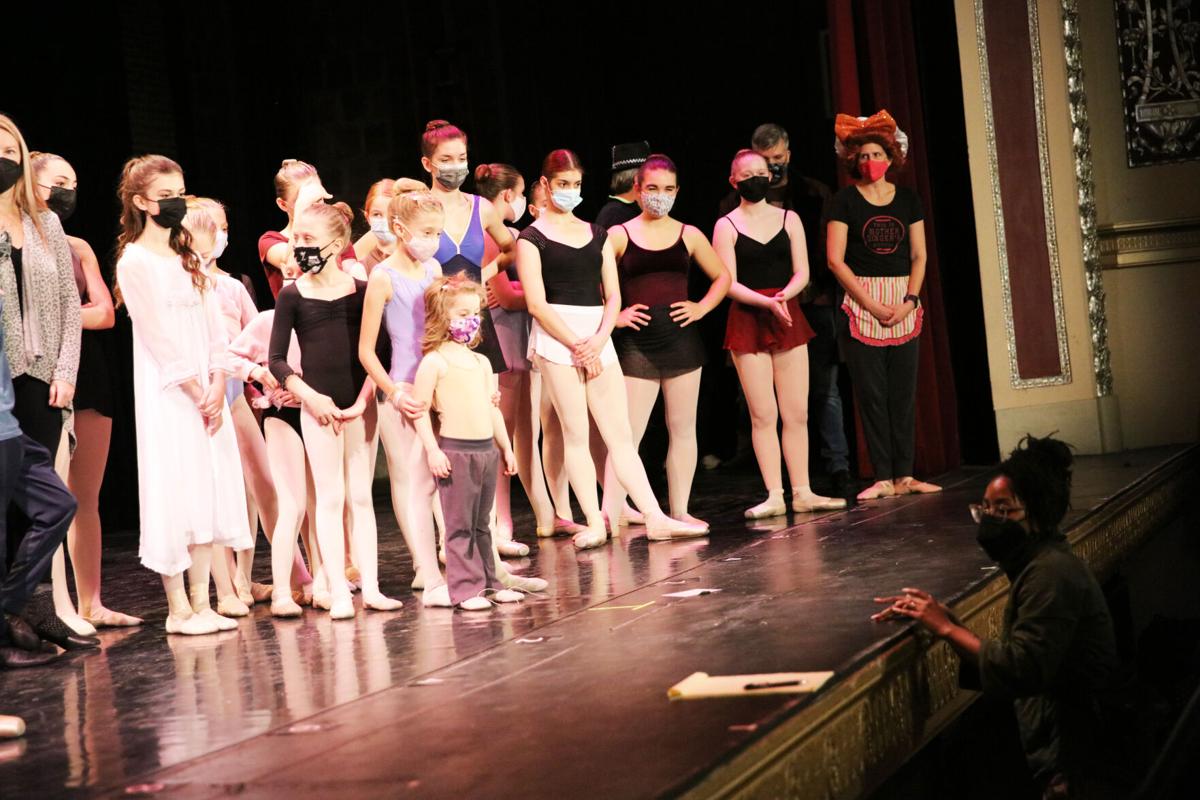 Choreographer Tiffany Rea-Fisher talks with dancers after Wednesday’s rehearsal at the Strand Center Theatre in Plattsburgh. She is the executive director of EMERGE 125 based in Harlem, and she has done commissions for the Dance Theater of Harlem, Dallas Black Dance Theater, NYC Department of Transportation, Utah Repertory Theater, The National Gallery of Art in D.C. Her work was performed for the Duke and Duchess of Luxembourg.

Dew Drop (center, Juliana DeChavez) in Wednesday’s run through of “Nutcracker in a Nutshell,” a co-production of the Lake Placid Center for the Arts and EMERGE 125.

Choreographer Tiffany Rea-Fisher talks with dancers after Wednesday’s rehearsal at the Strand Center Theatre in Plattsburgh. She is the executive director of EMERGE 125 based in Harlem, and she has done commissions for the Dance Theater of Harlem, Dallas Black Dance Theater, NYC Department of Transportation, Utah Repertory Theater, The National Gallery of Art in D.C. Her work was performed for the Duke and Duchess of Luxembourg.

PLATTSBURGH — “Nutcracker in a Nutshell” will bridge the pre-COVID past of the North Country Ballet Ensemble's annual holiday classic and its future Sunday, 2 p.m., at the Strand Center Theatre in Plattsburgh.

“Until the pandemic, The Nutcracker had been performed in the North Country for 34 successive years,” Alice Schonbek, artistic director, writes.

“And I’m exceedingly glad that we’re back, beginning a new collaboration with an entirely new show, that will lay a foundation for a new level of dance performance in the region.

“Formerly under the auspices of the North Country Ballet Ensemble, the production has now been folded into the organization of Lake Placid Center for the Arts (LPCA) and EMERGE125, a dance company based in New York City and Lake Placid. This allows us to access a deep well of creative resources to take the show to new and higher levels.”

With LPCA shows on Dec. 4 and Dec. 5, this production is co-produced by Lake Placid Center for the Arts and EMERGE125.

NEW TWISTS ON A CLASSIC

Lighting is by Michael Cole.

Local dance students from the Tri-Lakes area will perform along side seasoned NYC professionals in shows both at Strand Theatre and LPCA.

“I’m very excited to be contributing my NCBE experience of the last 34 years to building this dynamic vision for the performance of the Nutcracker in the North Country,” Schonbeck writes.

As an Elisa Monte Dance artist-in-residence, Rea-Fisher trekked to the Adirondacks for almost 20 years at the LPCA.

When the director of the Lake Placid School of Ballet retired, James Lemons, LPCA executive director, asked Rea-Fisher if she would be interested in running a school.

“I had never considered running a school, especially at that time,” she said.

The Lake Placid School of Dance was born, and it offers ballet, modern and jazz.

“We've opened up the scope of it,” Rea-Fisher said.

“My company is called EMERGE 125. We are formerly Elisa Monte Dance, so we had been coming up for a really long time and we had a really strong relationship and really just like loved this community.”

When the North Country Ballet Ensemble disbanded during the pandemic, the regional dance community thought it was such a shame.

“'Nutcracker' is basically why they existed,” Rea-Fisher said.

“It's a dance tradition, but it's one of the few events that bring studios together from all over the North Country. There was no one positioned well to take it over.”

LPCA approached her to see if she would be interested in a co-production.

“And do the choreography and re-imagine it,” she said.

Six different dance schools are represented in “Nutcracker in a Nutshell.”

“So the audiences of the Strand, it's the first time. It's rare that you get to premiere a piece that is tradition because it's the same thing. You do it over and over. It's an evergreen show. So, we're so excited that the Strand audiences get to, because dance is about communication, so they're the first audience we're going to get to communicate with. It's a top to bottom brand-new show.”

An open call was held for the production after Rea-Fisher received NCBE's blessing and LPCA's backing.

“Once those two things locked in, I spoke to Alice, who is the artistic director of NCBE, and said this year I feel like we shouldn't do auditions,” she said.

“I think anybody who wants to be in this production, we should find a place for. That is really how it went. The theaters are our sacred spaces. We had been missing that, so I didn't want to put any barriers to entry.”

Dancers range in age from 3-year olds to grandpas, who dance with professionals from EMERGE125 and Dance Theater of Harlem.

“So those are our two principals that are coming,” Rea-Fisher said.

“It's really wonderful, and I feel like not only in this show, but in rehearsals because you have little ones all the way up to professionals and parents, there's like this inspirational and aspirational art that happens. You can see like, ‘Oh, I could do that.’”

“Our version is an abridged version,” Rea-Fisher said.

“Usually, the Nutcracker is two acts. Ours is in a nutshell, and it's one act. But instead of having the big party scene and that, what we've done is created a street scene that happens in the house and through the aisles to get it started.

"And we go straight into Drosselmeyer's workshop where Claire receives the Nutcracker. She goes home, she falls asleep, and then what would be the second act plays out as it would.”

WHAT: “Nutcracker in a Nutshell,” a co-production of the Lake Placid Center for the Arts and EMERGE 125.

All tickets purchased will be held at Will Call to pick up the Day of Show.

Allen C. Caswell, 91, of Churubusco, passed away December 4, 2021 at his daughter's home aided by Hospice of the North Country. Arrangements are incomplete with the Chateaugay Funeral Home. A full obituary will be published later.

77, of Flynn Avenue, Plattsburgh, passed away on Saturday, December 4, 2021 at Clinton County Nursing Facility. He was born in Plattsburgh on February 6, 1944 the son of George and Bertha (Reil) Ducatte. Visitation will be Friday, December 10, 2021 at the R. W. Walker Funeral Home from 4 to …