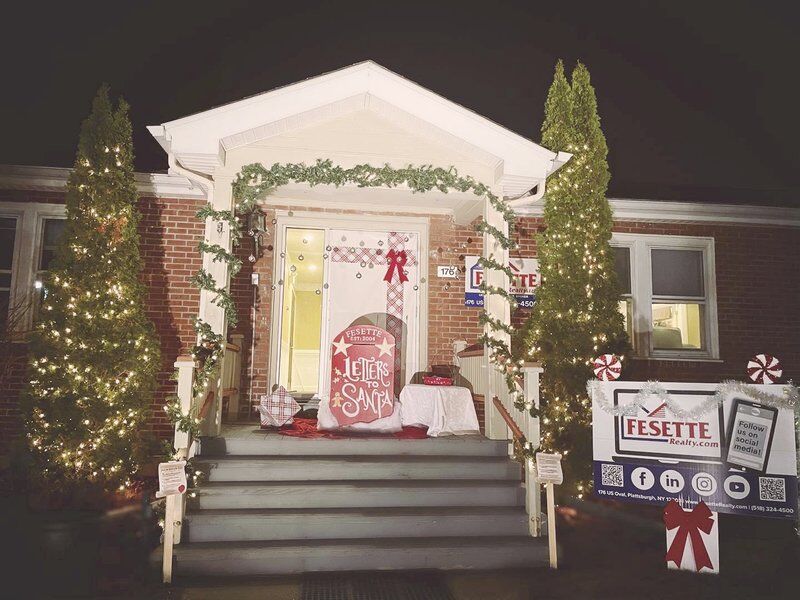 IMAGES PROVIDEDChildren and the young-at-heart can share their thoughts and wish lists and drop them off at the Letters to Santa mailbox at Fesette Realty located at 176 U.S. Oval in Plattsburgh. 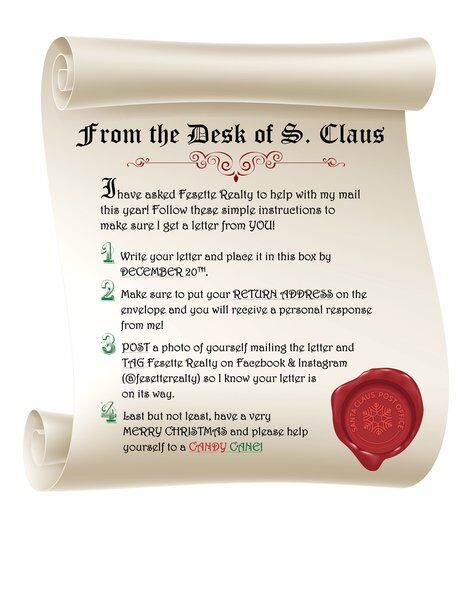 IMAGES PROVIDEDInstructions for getting your letter to Santa Claus.

IMAGES PROVIDEDChildren and the young-at-heart can share their thoughts and wish lists and drop them off at the Letters to Santa mailbox at Fesette Realty located at 176 U.S. Oval in Plattsburgh.

IMAGES PROVIDEDInstructions for getting your letter to Santa Claus.

PLATTSBURGH – Letters to Santa can be dropped off in a certified North Pole postal box at Fesette Realty in Plattsburgh.

“This was something we did not have planned,” Cara Teeple, licensed real estate agent, said.

“I went into Neil's (Fesette, broker/owner) office one day, and I was just kind of thinking.”

Teeple had heard from a lot of family members and friends that they weren't really decorating for Christmas.

“They just didn't feel like it this year,” she said.

“A lot of people just weren't really into the spirit with everything going on. I was just trying to think of something that would maybe promote it on another level even in the office to get our agents boosted with the spirit. I came up with this idea to have a Santa mailbox.”

Within a day and a half, Team Fesette ran with Rudolf.

“We actually constructed the entire thing,” she said.

“Figured out a plan for it. We had our graphic designer paint everything. Within two days we had everything constructed and ready to go outside.”

Staff decked the exterior with garlands and lights.

“If you're driving through the Oval, it's just the main road. This door is just the front one that nobody uses, so we thought it would be a good one where people can either walk up from the sidewalk or just drive by. It's not in the way of anything, so we can keep the display up 24/7.”

When letters are deposited, it makes an authentic drop-box sound.

“We built it to look like a mailbox,” she said.

“A couple of us, we built that entire thing to mimic a U.S.P.S postal box.”

Depositors can take candy canes flagged with “Have a FEStive Holiday!” from a tray.

“We put the Fesette logo, but then we cut it in half,” she said.

“So instead of saying Fesette, it says 'FES' with the first part of the logo, and then it says 'tive Holiday!'

“All the children are going to receive a personalized letter. All they have to do is drop it off, and we'll do the rest. We kind of did it in a way where it sounds like Fesette Realty is just helping to facilitate with Santa's helpers this year.”

Letters to Santa is a contact-free activity for families.

“We're trying to get the word out a little bit,” Teeple said.

“It's the first week of December, so we still have a little bit of time. It's an activity that people can go out and do it and get out of the house. We get to spread a little joy in a way that's safe for 2020.”