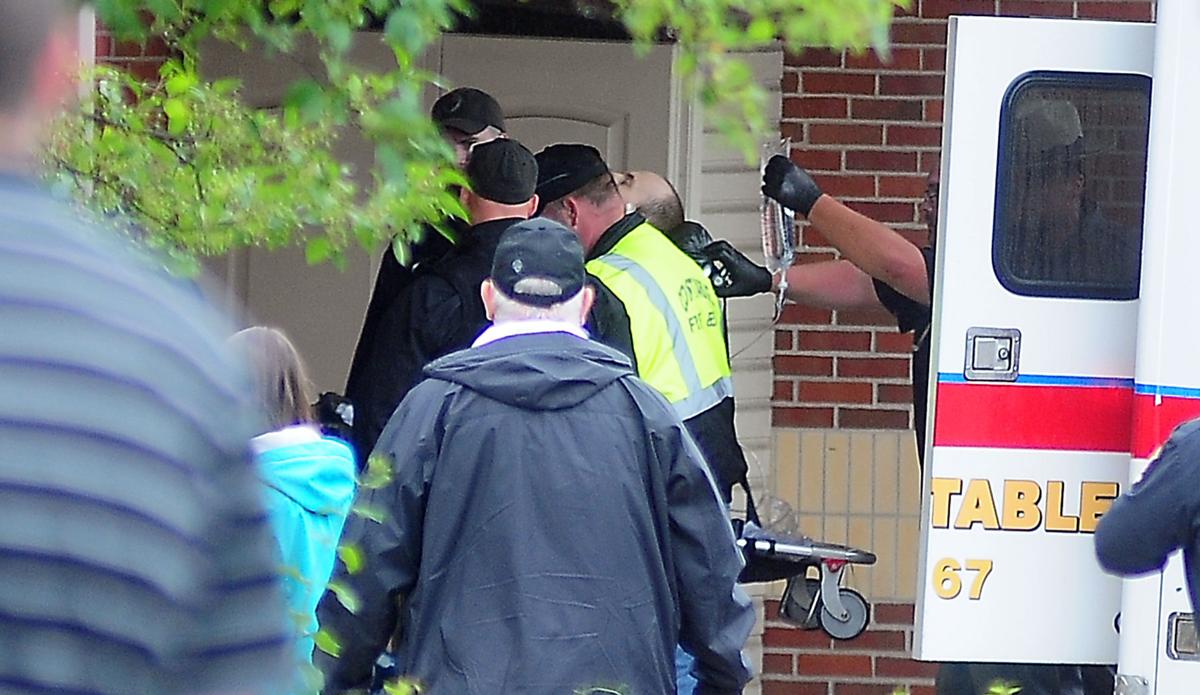 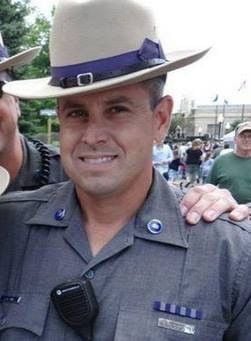 Sgt. Jay Cook, who single-handedly chased David Sweat and took him down with two gunshots to the torso Sunday afternoon.

Sgt. Jay Cook, who single-handedly chased David Sweat and took him down with two gunshots to the torso Sunday afternoon.

The New York State Police veteran of 21 years got out of his car and called to him.

The man ignored him, so Cook gave another holler, State Police Superintendent Joseph D'Amico said in telling the story at a press conference Sunday night.

A glance back from the stranger gave the Troop B sergeant a glimpse of a face seen around the country and beyond for more than three weeks, since the breakout from Clinton Correctional Facility of convicted killers Richard Matt and David Sweat.

Matt was dead; this was Sweat.

He took off running, Cook in pursuit.

Sweat plunged into a newly cut hayfield on Tom McDonald's farm on Coveytown Road and was hightailing it for a treeline.

Cook knew he couldn't catch the fugitive, D'Amico said, and the officer knew if Sweat made it into the forest, the hunt would be on again.

At that spot, the U.S. border with Canada is just a mile and a half away.

Cook's aim was true — he caught Sweat twice in the torso, and the man went down.

Constable EMS was summoned to the spot at 3:17 p.m.

A few minutes later, a dispatcher asked: "No law enforcement that's been shot?"

Escorted by police cars with lights flashing and sirens wailing, the ambulance took the captured convict to Alice Hyde Medical Center in Malone.

Listed in stable condition, Sweat was later transported by ambulance to Potsdam, where he was put aboard a plane and taken to a trauma center at Albany Medical Center.

After arriving at about 9 p.m., he was "examined by a team of specialists, including emergency medical physicians, trauma specialists and others," a statement from the hospital said.

And his condition was amended to "critical."

Sweat had not yet been interviewed by police, D'Amico said on Friday night.

"She was pretty sure it was (Sweat). I just drove up; it was already done," he said.

The last stretch to the Canadian border is all open, without cover, he noted.

“This is all farmland. I could not tell you how he got from there to here," Patterson said.

As for nearby friends and neighbors, the relief was palpable.

The shooting and capture missed the attention of McDonald, who was watching TV on Sunday afternoon when, he said, "all of a sudden a whole bunch of cop cars went through.

"I didn't see anything. I just know the ambulance came and went out in the field."

Yellow crime-scene tape was draped around his field, and he was asked to stay inside while forensic work was completed.

MacDonald was happy the manhunt was over, both for the community and for the law-enforcement officials who worked for 23 days and nights to find the two escaped killers.

He suspected that Sweat probably got on the railroad tracks and followed them to the Constable farm location.

Allen Arno, who lives within a mile of where Sweat was shot on Coveytown Road, saw police speed through the area and link up with EMS.

After they heard reports of the shooting on their scanner, he and his daughter-in-law approached a passing officer and begged to know if police had gotten Sweat.

With a triumphant thumbs up, the officer confirmed the capture.

"It's been a long three weeks," Gov. Andrew Cuomo said at the press conference. "The nightmare is over."

Sweat was captured about 16 miles from where his partner-in-escape, Richard Matt, was killed on Friday afternoon.

They had already known, from DNA evidence, that Matt had broken into the nearby camp on County Route 41.

There'd been no proof that Sweat had been there with Matt, however, but police worked under the assumption that he was within the same perimeter thrown by the massive search team and that he was heading for Quebec.

"We were pushing southward from the border," D'Amico said. "This was right in that search area."

In the end, DNA did prove Sweat had been at the Route 41 camp, he said.

And police believe "picnic-style" pepper shakers found there were used by the fugitives to throw tracking dogs off the scent.

"It was fairly effective," D'Amico said.

Police didn't yet know when Matt and Sweat had parted company.

"He was headed in the right direction," Clinton County Sheriff David Favro said in regard to the proximity of Canada. "Once Matt got shot, looks like the adrenaline got going, and he moved fast."

Matt had a .20-gauge shotgun when he was shot and killed.

"Our intent was to bring him in without having to use force," he said. "(But) sometimes force is necessary.

"If he had made the treeline ... who knows what kind of damage (he could have caused as pursuit continued).

Reporter covering Tri-Lakes area news, Essex Co. court trials, and environmental issues impacting the Adirondack Park. She began writing for the Press-Republican in 2005, starting with the Boquet Valley beat. She lives in Elizabethtown.