Law enforcement officers check car trunks at a checkpoint near the media staging area in downtown Owls Head Monday. The manhunt in Franklin County on Monday focused on creating a perimeter around the area where authorities believe escaped killers Richard Matt and David Sweat were hiding. 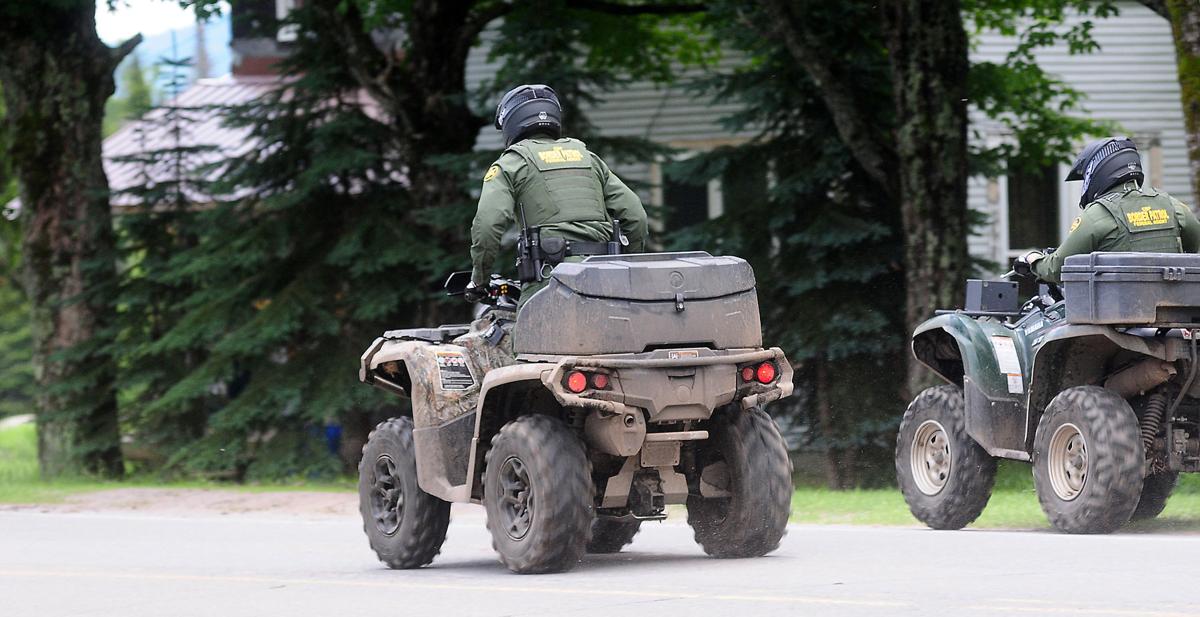 U.S. Border Patrol agents cruise down the road near the Trailside Bar & Restaurant searching for escaped convicts Richard Matt and David Sweat, who on Monday had been fleeing the law for 17 days.

Law enforcement officers check car trunks at a checkpoint near the media staging area in downtown Owls Head Monday. The manhunt in Franklin County on Monday focused on creating a perimeter around the area where authorities believe escaped killers Richard Matt and David Sweat were hiding.

U.S. Border Patrol agents cruise down the road near the Trailside Bar & Restaurant searching for escaped convicts Richard Matt and David Sweat, who on Monday had been fleeing the law for 17 days.

Searchers appeared to be closing in Monday on Richard Matt, 48, and David Sweat, 35, in a remote section of Franklin County, where law enforcement officials were establishing a perimeter in preparation for working their way inward.

A break-in and sighting of a man Saturday at a remote hunting camp — leased by a group of correction officers — prompted police to begin searching in and around the Town of Bellmont hamlets of Mountain View and Owls Head.

The area is located about 20 to 25 miles from Clinton Correctional Facility in Dannemora, the maximum-security prison from which Matt and Sweat escaped on June 6, launching a massive manhunt.

Sources told the Press-Republican that law-enforcement officials have DNA confirmation on both men that leads them to believe the sighting at the hunting camp was valid.

It was a strong lead, multiple sources said.

Boots, bloody socks and toiletries were found at the camp, along with a water jug and jar of peanut butter that had been opened, the Press-Republican has learned.

The agencies involved in the search have been getting fast turnaround on forensics information because this is a high-profile, highly dangerous case.

At a news conference on Monday, State Police Troop B Commander Major Charles Guess would say only that authorities have "developed evidence" that Matt and Sweat may have spent time in an Owls Head area cabin.

"We have recovered specific items from that cabin. We have forwarded them to the appropriate laboratories and reached conclusive determinations, but we are not prepared to release (information) on that evidence at this time so we do not jeopardize the continuity of the investigation," he said.

Terry Bellinger, owner of Belly’s Mountain View Inn, told the Press-Republican that a local man, armed with a handgun, went to check on his camp off Wolf Pond Road on Black Cat Mountain on Saturday and saw a jug of water and a jar of peanut butter on the table.

Bellinger said the camp owner yelled for whoever was inside to come out.

The person saw a man run out the back but could not tell whether it was one of the fugitives, said Bellinger, who noted the camps in that area are empty most of the year and often have canned goods in them.

The Press-Republican has confirmed that the camp is owned by a group of correction officers. There is no indication that information on the camp's location was provided to Matt and Sweat.

The net appeared to be closing in on Matt and Sweat.

"The dogs have got a good track, and we are tightening the perimeter," one source told the Press-Republican on Monday afternoon, "so within the next 24 to 48 hours, we're confident they will be caught."

Law-enforcement officials close to the investigation said a hard perimeter was being set up Monday and that the big push would then begin.

It looks like Matt and Sweat followed the power lines and an old railroad bed from Dannemora to Lyon Mountain and into Standish, the sources said.

"And from that, it looks like Mrs. (Joyce) Mitchell was Plan A (their ride out of Dannemora). There was No Plan B," one said.

"They don't have a plan now, other than to evade us."

"The energy (among law enforcement) is just fantastic," another source said Monday.

Guess said there was no definitive evidence the duo received any assistance outside of that of alleged accomplice Mitchell, 51, of Dickinson, the only person so far charged in the escape.

Mountain View was abuzz with action throughout Sunday night and Monday.

Mike Carley, who lives on the east side of Mountain View Lake just 2 or 3 miles from where the camp in question sits, looked out his window Monday morning and saw state troopers emerge from the woods.

Officers were bending down and inspecting objects, weapons drawn and at the ready.

Officers were working their way through the area Sunday night in the pouring rain, he said, even visiting his side of the lake and knocking at his door.

They checked the buildings on his property just as they had those neighboring his home, making sure locks were secure, windows were unbroken and that no traces of a break-in were present.

"Like everybody else up here, we're prepared," he said about the possibility of encountering either Matt or Sweat.

At the news conference, Guess said the area around Dannemora remained a primary focus of the investigation and urged the public to remain vigilant and report anything out of the ordinary, especially at camps.

He renewed a call asking people to check their trail cameras and other surveillance equipment.

"Let us know if you have captured footage of any suspicious activity," Guess said.

He said the weather, terrain, the environment and the scope of the Adirondacks have complicated the search for the escaped killers in this area.

Jason Langdon, a caretaker for several camps in the search area, said they have checked trail cameras near those but haven't seen any trace of Matt and Sweat.

The area being searched is large, thickly forested and very rugged.

"It's a wall of green," Langdon said.

Glenn Yando of Wolf Pond Road said anyone trying to hide in the woods could made a go of it.

"I've hunted up here for so long. If you want to get lost, you can get lost up there."