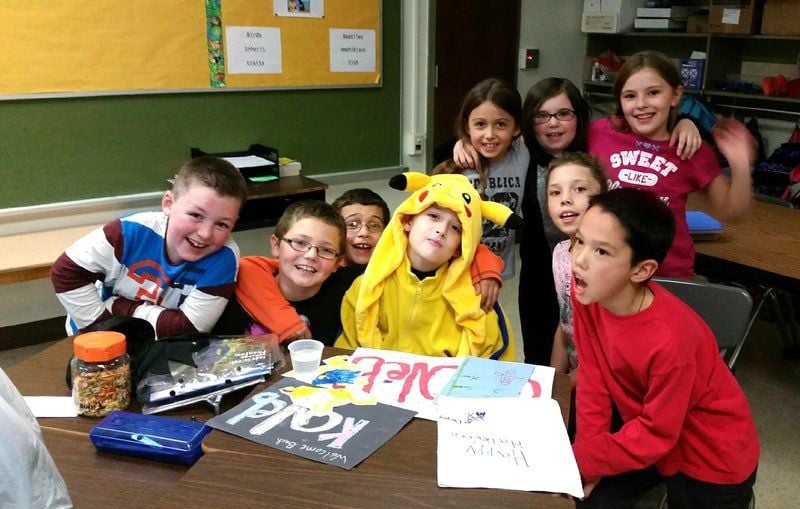 Kaleb LaBarge, wearing a Pokémon costume for a Halloween event last fall, poses for a photo with his classmates. 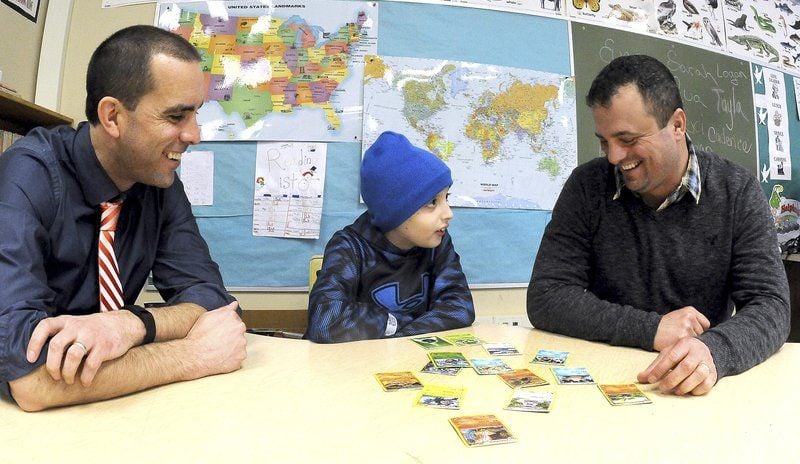 Kaleb LaBarge (center) teaches the card game Pokémon to Chazy Elementary School Principal Rob McAuliffe (left) and third-grade teacher Craig Duprey on Thursday. School staff and students have proved to be a real family to Kaleb since his diagnosis of a brain tumor last fall.

Kaleb LaBarge, wearing a Pokémon costume for a Halloween event last fall, poses for a photo with his classmates.

Kaleb LaBarge (center) teaches the card game Pokémon to Chazy Elementary School Principal Rob McAuliffe (left) and third-grade teacher Craig Duprey on Thursday. School staff and students have proved to be a real family to Kaleb since his diagnosis of a brain tumor last fall.

CHAZY — Kaleb LaBarge isn’t sure what his favorite Pokemon character is, but ask him what he thinks about his school, and he quickly gives a thumbs-up.

Last October, scans found a tumor on the left lobe of Kaleb’s brain.

“You don’t know what scary is" until you hear that diagnosis, Jackson said.

For the next three months, Jackson stayed by her son’s side while he was treated in Burlington.

So when the day came in January that Kaleb was set to return to school, she was nervous.

But the support CCRS has offered and the communication they’ve maintained have exceeded Jackson’s highest expectations.

“Everybody is on the same page, and everybody is rooting for him,” she said.

“Without any questions asked, at any time, I can call them up,” she said.

Duprey said the communication lets the staff be prepared for any changes in Kaleb’s condition from day to day.

When the teacher was told that chemotherapy had weakened the boy’s appetite, he was quick to offer a solution.

“I said, ‘Pack whatever he likes.’ He has quite an array of snacks now, and when he wants to eat, whatever time of day it is, he eats,” he said.

When Kaleb lost hair because of the treatment, he was allowed to wear a hat during class time.

It's fine for him to come into school later when he's feeling too tired.

To prevent any infections, classroom surfaces are thoroughly washed at the end of every day, and Kaleb enjoys recess inside with a movie.

Jackson said the teachers for her 11-year-old son, Seth LaBarge, and 15-year-old stepson, Josh Clark, have also spoken with them to make sure they are doing OK.

Along with keeping staff updated on Kaleb’s condition, Jackson said, she appreciates the efforts made to keep his classmates informed.

Duprey said he has been touched by the support and concern that his students have shown for Kaleb, never questioning the special exceptions made for him.

“Any day that Kaleb is not here, they need to know first thing in the morning: ‘Where is he? How is he doing?’” Duprey said.

Hanging on the walls of Kaleb’s bedroom are brightly colored get-well cards and letters sent by his classmates during his absences.

Word on Kaleb’s condition even reached up to the Junior High and High School, where the Friends of Rachel Club raised $220 for Kaleb’s family.

She thanked Kristi and James Moser and the Make-a-Wish Foundation for sending Kaleb on a trip to SeaWorld, Disney World and Legoland in Florida.

A community effort led by Chazy resident Linda Moore prepared a holiday meal for the family to enjoy after they returned home from Burlington last December.

The result of all of these efforts, Jackson and Duprey agreed, is giving Kaleb a sense of normalcy and the chance to have fun with friends and family.

“He’s been smiling, and I think that’s the biggest thing,” the teacher said.

Ben Rowe is a staff writer, photographer and page designer. As a lifelong Adirondack resident, he enjoys the opportunity to share the stories and images of the North Country.