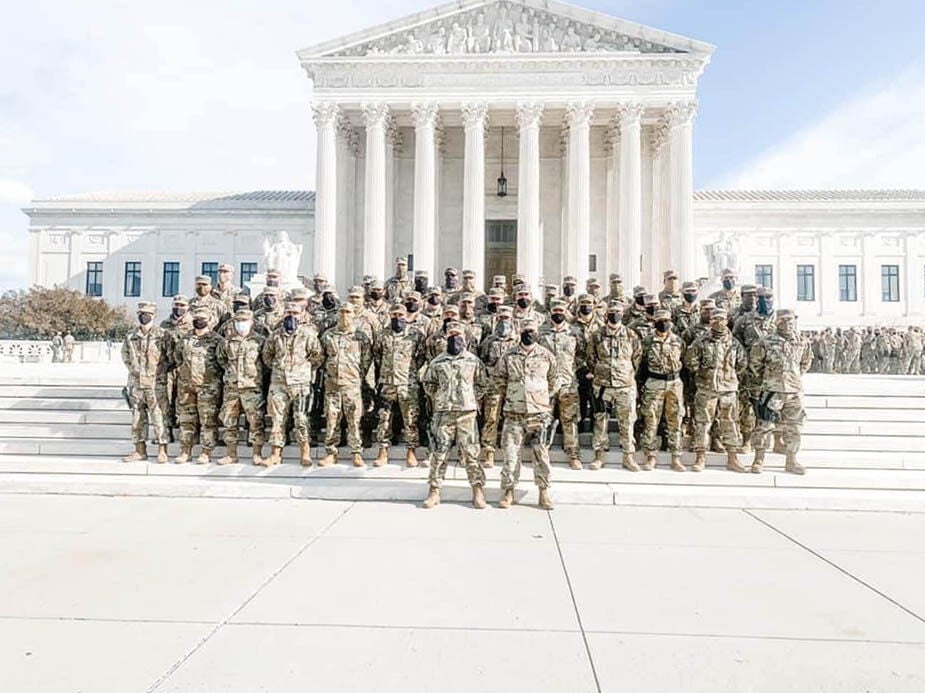 Charles Ritter, a Paul Smith’s student who deployed with the National Guard last month to secure Washington D.C. during the presidential inauguration, stands with the 102nd Military Police battalion on the Supreme Court steps, the building he was tasked with guarding. 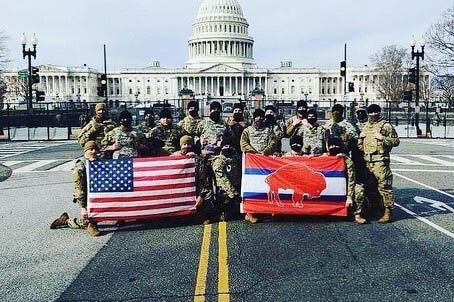 Charles Ritter and a group of fellow National Guard soldiers pose with the American flag and a retro Buffalo Bills flag in front of the Capitol building while they were deployed in Washington D.C. in the days around the Jan. 20 presidential inauguration. Ritter said the Bills’ playoff run during that time kept his unit’s spirits high.

Charles Ritter, a Paul Smith’s student who deployed with the National Guard last month to secure Washington D.C. during the presidential inauguration, stands with the 102nd Military Police battalion on the Supreme Court steps, the building he was tasked with guarding.

Charles Ritter and a group of fellow National Guard soldiers pose with the American flag and a retro Buffalo Bills flag in front of the Capitol building while they were deployed in Washington D.C. in the days around the Jan. 20 presidential inauguration. Ritter said the Bills’ playoff run during that time kept his unit’s spirits high.

Among the 26,000 National Guard soldiers securing Washington D.C. for the 2021 presidential inauguration last month, sleeping on the floor of the Capitol building and patrolling the area in the wake of a deadly riot, was Paul Smith’s College student Charles Ritter.

From Jan. 9 to Jan. 27 Ritter was one of the thousands of Guard members activated in Washington, D.C. to secure the Capitol building for the inauguration after the building was attacked.

“The response was massive,” Ritter said. “At the apex of it all we had more soldiers there than we had overseas anywhere.”

He said there were units from every state; the unit that relieved his came from Alaska.

Security for the Jan. 20 inauguration was beefed up immensely because on Jan. 6, as Congress met to count electors, a violent mob of Donald Trump supporters stormed the Capitol building, broke into the House floor and nearly entered the Senate floor, trying to stop Congress from certifying the election. Five police and participants died in the riot.

Ritter was activated on Jan. 6, mere hours after the riot.

“I was on a ski lift at Titus Mountain when I got the call,” Ritter said.

The mission was voluntary. Despite the start to his final semester of college approaching on Jan 26., he agreed to deploy and was in Washington D.C. three days later.

“It just seemed at that time really important,” he said.

His unit, the 105th Military Police Company, is headquartered in Buffalo.

“When you get activated they give you a call and say ‘You have to be at your unit’s armory within 24 hours,’” Ritter said. “The way that the New York National Guard responded is pretty impressive and it says a lot about how we live in a constant state of readiness as Guard members.”

He said the movement reminded him of when the National Guard deployed to the Virgin Islands in 2017 after Hurricane Irma.

The National Guard deployment in the Capitol was extended last week to maintain a presence of at least 5,000 troops there through mid-March, due to the heightened threat.

Ritter said some in his unit are choosing to go back, but he had to return to start his final semester at Paul Smith’s College.

Classes, COVID and the Bills

Ritter returned to Saranac Lake a day after the semester began, and now has a bit of catching up to do while in his 10-day quarantine. Initially from Ithaca, Ritter is in his third year of a Natural Resources Conservation and Management program and will graduate this spring.

He said the college worked well to accommodate his situation, but while deployed in Washington Ritter said “I spent a lot of time emailing professors.”

“I’ve known Charlie for a couple of years now,” Henderson said. “I’m really proud of him.”

This mass deployment took place in the middle of a pandemic, too. After the inauguration over 100 National Guard members tested positive for COVID-19. Ritter said they took protocols like wearing masks to mitigate the spread, but that social distancing was nearly impossible.

“The mission came first a little bit, in terms of keeping the Capitol secure,” Ritter said.

He said he will get a test after his quarantine.

The deployment also came during a historic season for the Buffalo Bills football team. Ritter said he is not a Bills fan himself, but that since his unit was full of Bills’ fans, he was swept along for the ride.

The day they arrived in D.C., Jan. 9, the Bills played the Indianapolis Colts, winning their first playoff game since 1995.

“We were watching it on people’s phones,” Ritter said.

He said the unit put a “Go Bills” sign on the back of their bus.

“It was good that the Bills’ run was happening while we were down there because it seemed to keep a lot of people’s motivation up,” Ritter said. “We talked a lot of football.”

One photo he shared shows his unit with an American flag and a Bills flag, posing in front of the Capitol building.

The scene in D.C.

In the first couple days, he was stationed at the Capitol building, behind a reconstructed fence. The original fence was destroyed in the riot.

As the inauguration drew closer, the National Guard pushed outward, shutting down blocks of streets and federal buildings around the Capitol and forming a large military-occupied perimeter.

Ritter said tensions among the troops were high at first, thinking about the potential of more violence, but it waned over time.

“The first five days that we were on our post people were on edge and worried,” Ritter said. “But I think as time went on, we didn’t get relaxed, but we realized that the majority of people here, they’re here to support us.”

He said civilians gave them food and words of encouragement.

In the days before the inauguration, photos circulated of soldiers sleeping on the floors and stairwells of the Capitol building, leading to concern and outrage, including from U.S. Rep. Elise Stefanik.

“Every member of Congress should be appalled by this despicable treatment of the men and women of the National Guard, who answered the call to protect our nation’s capital,” Stefanik wrote on Twitter.

Ritter was one of these soldiers.

“We spent quite a few nights around the Capitol,” he said.

Ritter said all soldiers had hotel rooms, but as the inauguration approached they couldn’t go back to them, because they were needed at the Capitol. The area was essentially shut down, with bridges leaving D.C. closed. He said this was sort of inevitable and was not too concerned by it.

“That was kind of an anomaly that the media picked up,” he said. “I felt like we were pretty well taken care of. The movement, to get all the soldiers there across all 50 states, that’s an insane logistical event to do.”

“To me, what I saw, it was because they were bringing the restricted area we had set up back,” Ritter said. “They were trying to get that area back to normal.”

“Your efforts to secure the People’s House, the White House and America’s capital guaranteed the security of the inaugural ceremonies and the safety of all those in attendance, and allowed America’s unique and sacred tradition of peacefully transferring power to endure,” she wrote in a letter.

Henderson said he was proud of Ritter but disappointed the National Guard was needed at the Capitol.

“It’s sad to me that there’s a growing contingent of people who won’t believe in democracy anymore and seem to think violence is the answer,” Henderson said. “It’s clear to me that there is a large portion of the country that increasingly sees democratic processes as illegitimate.”

He said it is fortunate that the violence on Jan. 6 was not worse than it was.

“It’s a form of desperation because they’re not winning in politics anymore so they have to resort to these other tactics,” Henderson said.