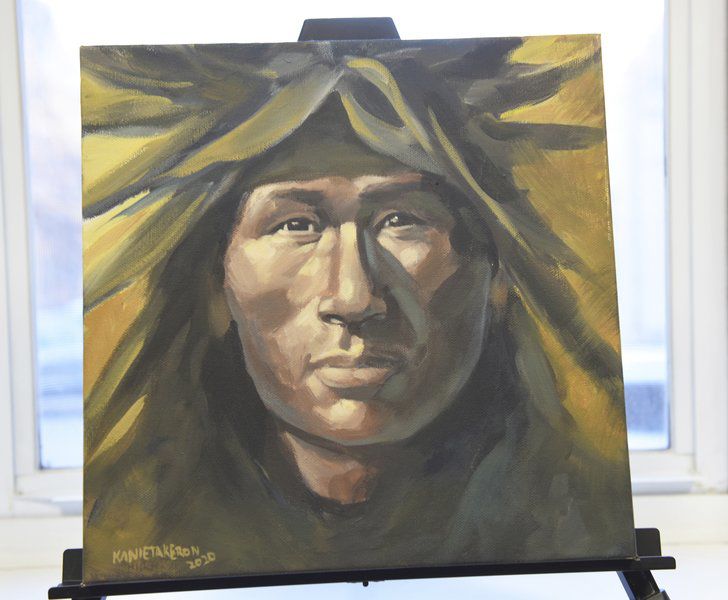 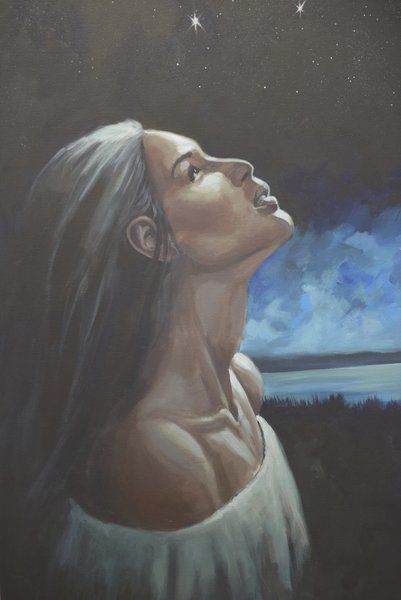 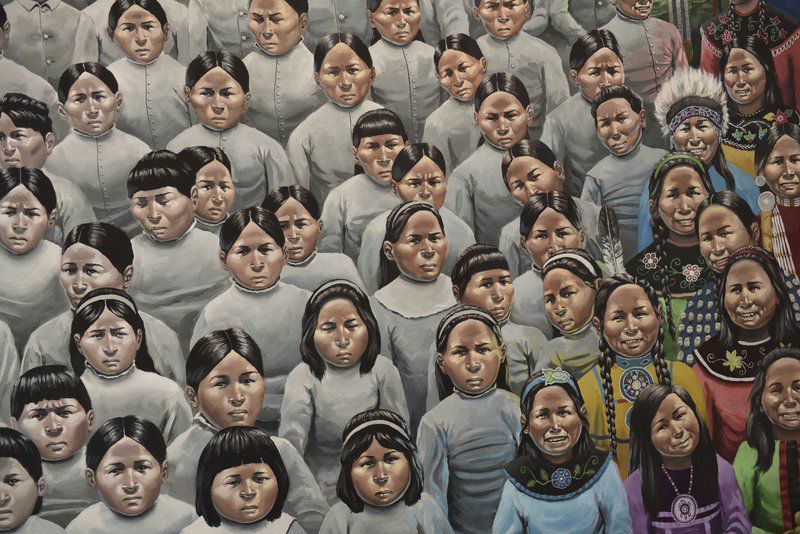 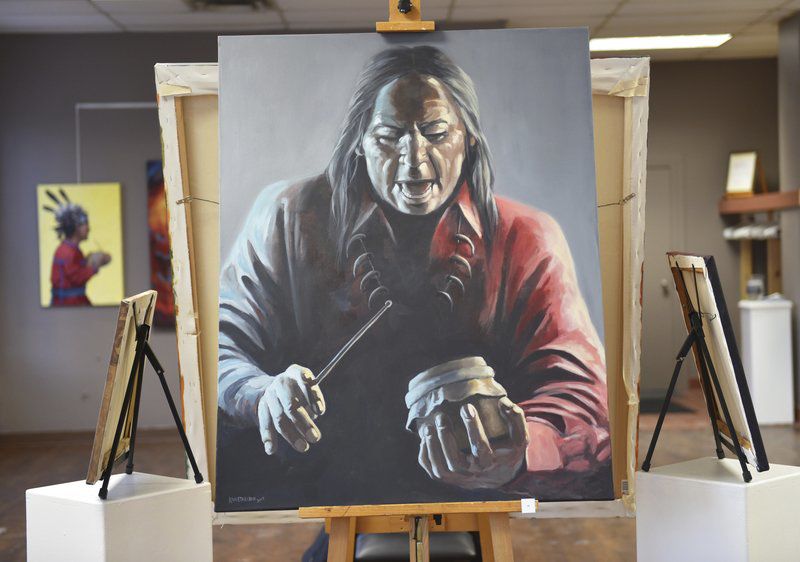 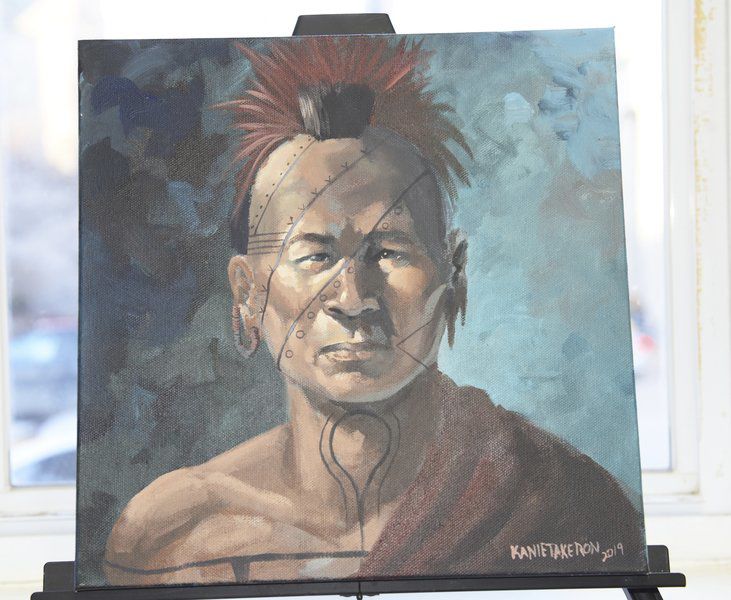 "Many Stories" by David Kanietakeron Fadden.

"Many Stories" by David Kanietakeron Fadden.

PLATTSBURGH — “The Art of David Kanietakeron Fadden” is an immersion into the culture, ancient and contemporary, of the Kanien'kehá:ka “People of the Flint,” Keepers of the Eastern Door, of the Haudenosaunee, “People of the Longhouse.”

A maternal ancestor named him Kanietakeron “Patches of Snow” because Fadden was born when March's winter powder recedes, and he hopes it does in time for his first solo show, which opens 5:30 p.m. Friday at the Strand Center for the Arts in Plattsburgh.

The show features 41 acrylic works, which offers portals into different facets of Kanien'kehá:ka culture from the everyday “Kenneth” to the sacred “Smoke Dance.”

Fadden paints what he knows and sees such as family friend Kenneth Thompson.

“A lot of people know him,” Fadden said.

“He's a really, really nice man. Very friendly. He's well respected in the community. In that photograph that I use as reference is from a Memorial Day Parade through Hogansburg. He was in his prized black Cadillac. He has a nice smile. That's what I want to do is portray our people as regular people. We laugh. We have emotions. We live in modern, contemporary society.

“The average American, they don't think of indigenous people as being contemporary. They think of them as being a historical footnote. To put a Native person in a Cadillac, it also illustrates the sense that, well, we live here now today.”

Fadden's works range from traditional portraiture such as “18th Century Mohawk” to impasto “He Peers Through the Trees.”

Seven years ago, he experimented with pointillism and segued to mosaic-style.

Three works of the latter style include “At the Sing,” “Busy World” and “Hear Me...LOL.”

Fadden, a cultural ambassador for the Haudenosaunee also known as the Iroquois Confederacy, is an interdisciplinary artist — vocalist, dancer and storyteller — for the North American Travelling College.

He is a third-generation museum educator at the Six Nations Indian Museum in Onchiota, which was founded by his paternal grandparents Ray Tehanetorens and Christine Skawennati Fadden.

He carries on the 66 year-old legacy with his brothers, Donald Tehonahtakeh, Danny Kanentiio and father, John Kahionhes.

He is a sought-after illustrator for such books as an recent one on his grandfather's story about the hermit thrush.

A frequent exhibitor in group shows, “Indigenous Reflections” reveals Fadden can work small and fast, “quick exercises,” in works such as “A Poet” and “Silver Brooches” or large and detailed in works such as “Rhythmic Verses,” “Raven Call” and “Kill the Indian, Save the Man...Resilience.”

The latter is about the trauma of residential schools, where Native children were sent away from their families and were not permitted any vestige or expression of their Indigenous traditions.

“Even as young person, even before I knew what a residential school was, I understood from these old photographs that it was wrong.”

He references a photograph of Lakota boys who arrived dressed in their traditional regalia at the Carlisle Indian Industrial School in Pennsylvania.

“The next photograph is them with their hair cut and a military uniform on,” Fadden said.

“It just didn't look right to me as a kid. The trauma that took place during that time when those young people were basically stolen from their homes and forced to speak English. They lost their culture. I did this painting. I took it on. Again it was another challenge. There were a lot of faces. There's about 225 faces in that painting.”

He chose not to have the work focus solely on negativity.

“On the right side of the painting, I added more color,” Fadden said.

“A lot of the young people are wearing traditional outfits again. That's representative of today where we no longer have to go to these residential schools, but we can practice our spiritual beliefs out in the open. We are emerging from that dark time.”

WHAT: "Indigenous Reflections: The Art of David Kanietakeron Fadden.