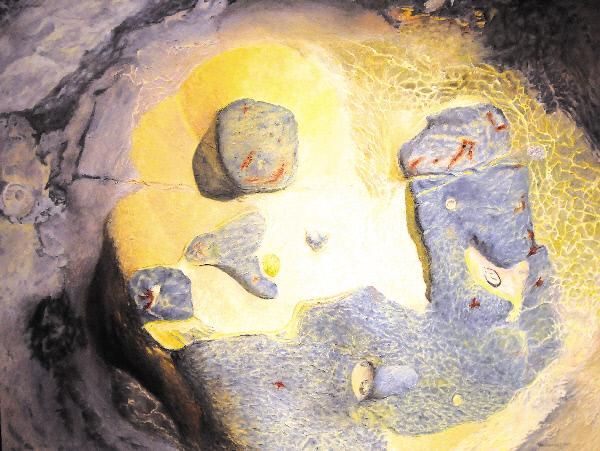 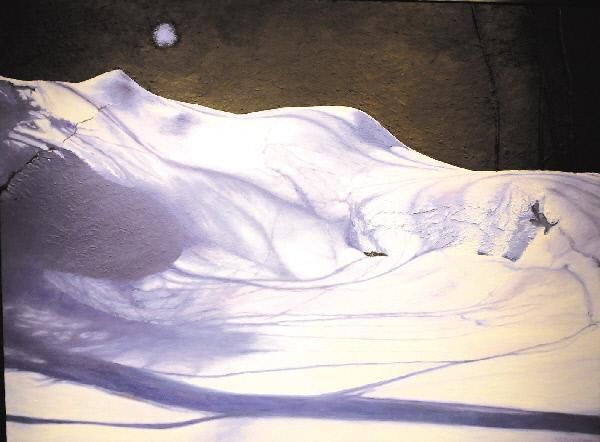 Visual artist Iain Whitecross taps snowy Adirondacks and beaches in southwestern France for the subject matter in his new exhibition, "Shore and Snow," at the Atea Ring Gallery here.

The gallery also features drawings by Charles Ramsburg and paintings and drawings by Rebecca Purdum.

In the main gallery space, Whitecross has 10 works. His process is oil paint over acrylic-based textures.

"They have a fairly rough, textured look," said Whitecross, who lives in Elizabethtown. "The themes are between beach and the snow. The snow paintings come from time spent last winter going on my skis or snowshoes in the woods and taking along my little camera to pick up memories of things seen."

Last fall, Whitecross traveled to the southwest of France to see the cave paintings at Niaux that date to 15,000 BP.

"The earliest cave paintings date 30,000 years ago," Whitecross said. "The earliest ones (are) from Chauvet. The ones at Lascaux are 20,000 BP. Those are the ones that most people have heard of.

"You can't see them any more. So many people wanted to see them; they deteriorated. They have created a fake grotto with paintings in that. Those are the three big groupings. I saw the most recent, relatively speaking."

The Magdalénien-era cave paintings of bison and horses at Niaux left a strong impression in his mind.

"It was quite a wonderful experience really. We were on the Atlantic shore near the Spanish border. We came through the Pyrenees.

"I found some rocky corners of beach. Wonderful pieces of rock with markings of tide, wind and animals' shells that have been on the rock faces and left marks behind," he said.

"It's quite a colorful show, even though I hadn't thought it when I set out to do the show."

Whitecross's examination of the natural world is very close and has an disorienting aspect. The magnification of a tree's shadow leads viewers to question the size of the tree.

"A lot of people found it interesting and a little bit disconcerting at first until they realized what was happening. They (paintings) have an abstract quality. Something between. You haven't lost the real thing or the real image. The reference is still there.

"At the same time, it's not like something you've readily seen before, like a postcard you buy and send to friends while you are on vacation."

"From a wonderful hike I did last fall in the Split Rock Area of the trail," Whitecross said. "There are some wonderful rock faces as you go down to Lake Champlain. It was a particularly beautiful day ... a few leaves on the trees. The foliage was opened up a little. You have the sun coming through the trees. Two of the paintings are from that. It has a feel of the rock paintings a little bit. How the images come and go like an illusion or something like that."

84, of Burke, died Thursday, March 4, 2021, at his home. Arrangements are with the Chateaugay Funeral Home, 36 Church St., Chateaugay.