Male teachers, Afghans and Peace Corps volunteers stand outside the Kandahar Cadastral School where Glenn Shafer and his colleagues taught. The word “cadastral” refers to surveying. “The school was at the high school level and taught most high school subjects in addition to surveying. Some of the Peace Corps teachers were women, who taught English, but they are not shown. I am in the back row, in the middle: 7th from the left and 6th from the right. The teacher who translated my English is in the front row, third from left.” 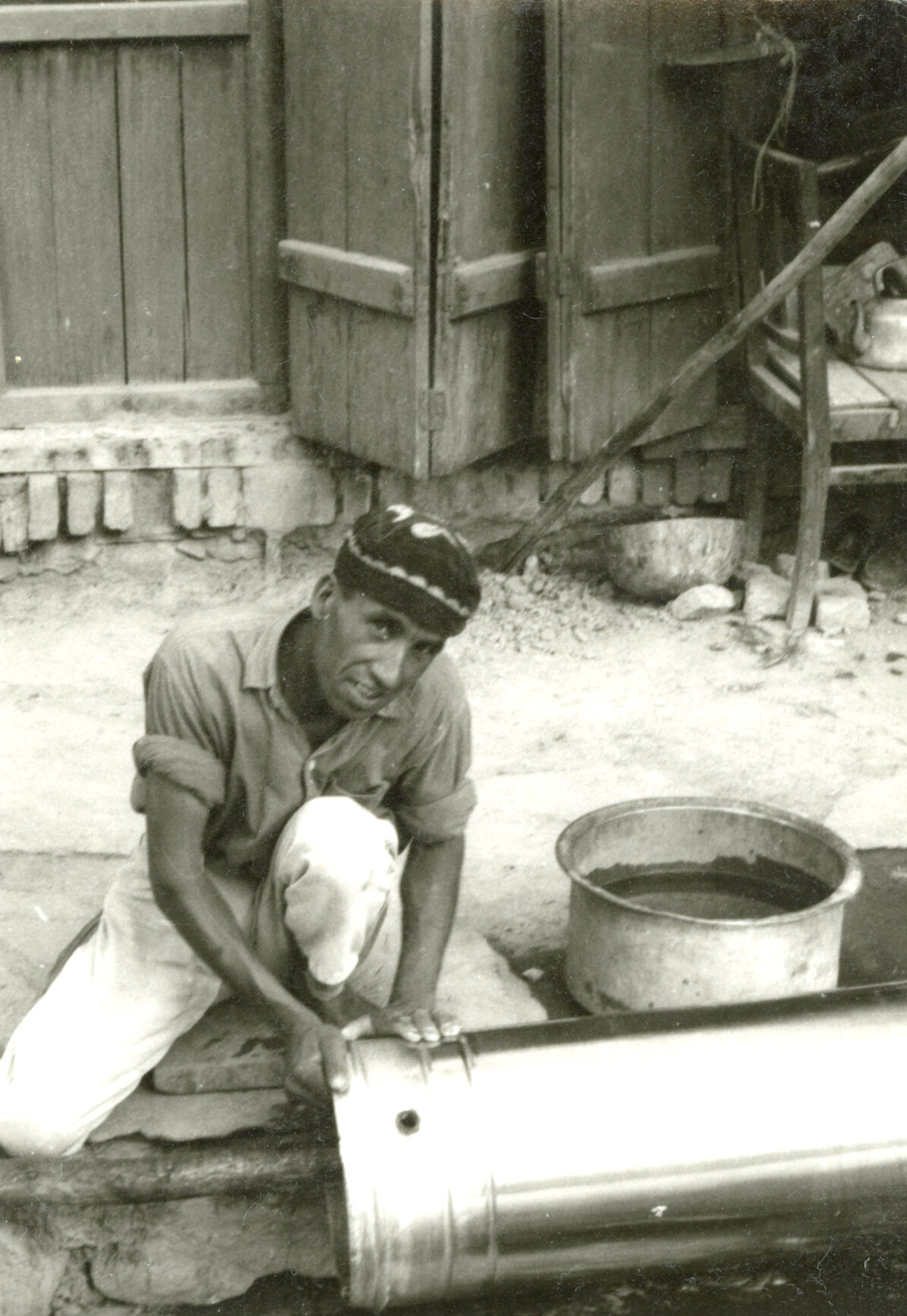 Glenn Shafer and several male Peace Corps volunteers went to the bazaar to buy a stove for their house. “The stove makers were all clustered together, ready to bargain in any language. This workman was at one of the shops.” 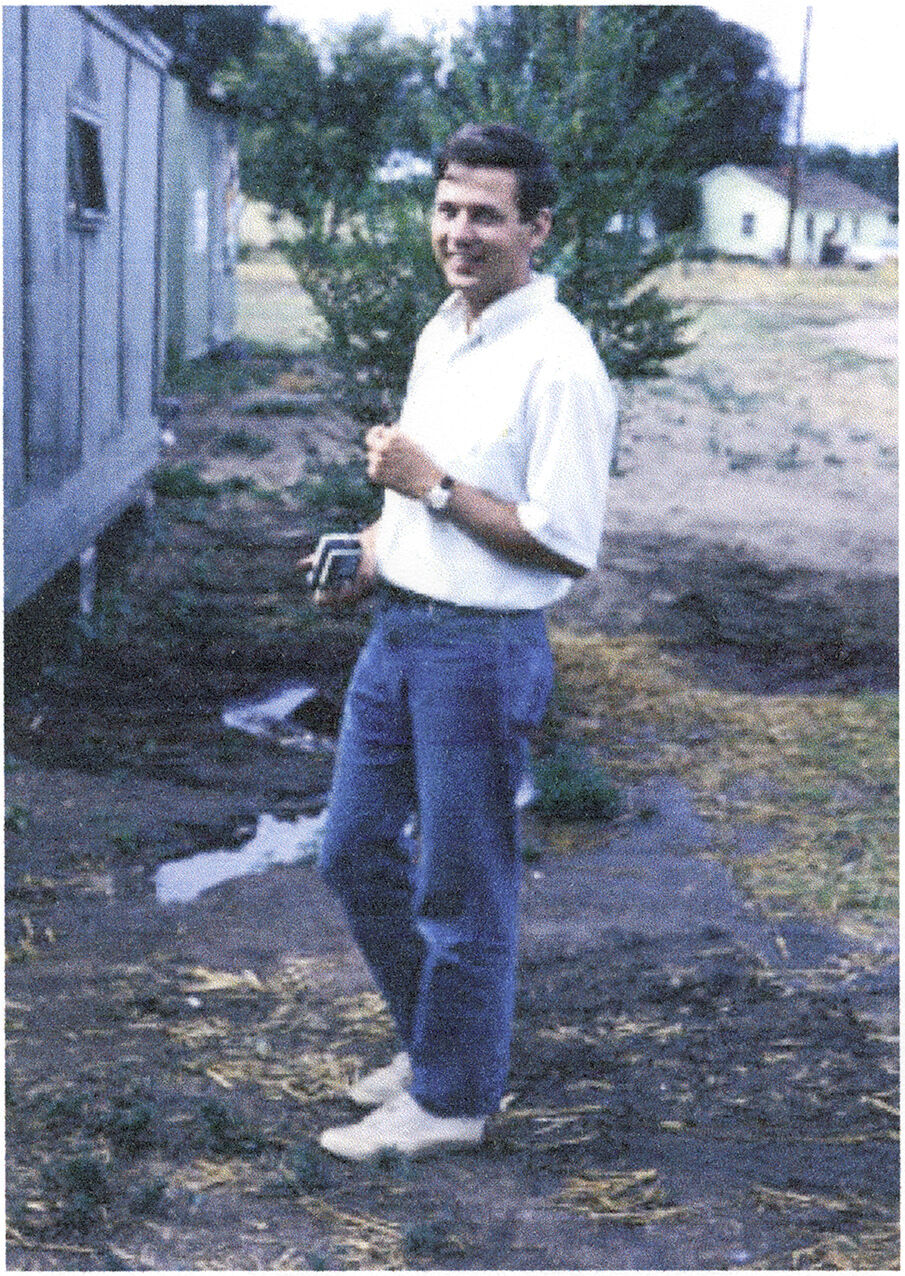 Glenn Shafer at Fort Lupton, Colorado, in a camp originally build for migrant laborers, during the summer of 1968. “Here, before we left for Afghanistan, our group studied Afghan culture and the Dari language.”

Male teachers, Afghans and Peace Corps volunteers stand outside the Kandahar Cadastral School where Glenn Shafer and his colleagues taught. The word “cadastral” refers to surveying. “The school was at the high school level and taught most high school subjects in addition to surveying. Some of the Peace Corps teachers were women, who taught English, but they are not shown. I am in the back row, in the middle: 7th from the left and 6th from the right. The teacher who translated my English is in the front row, third from left.”

Glenn Shafer and several male Peace Corps volunteers went to the bazaar to buy a stove for their house. “The stove makers were all clustered together, ready to bargain in any language. This workman was at one of the shops.”

Glenn Shafer at Fort Lupton, Colorado, in a camp originally build for migrant laborers, during the summer of 1968. “Here, before we left for Afghanistan, our group studied Afghan culture and the Dari language.”

I am writing because of the heartbreaking events in Afghanistan, which we are all witnessing from afar.

I was a Peace Corps volunteer there during the academic year 1968-1969. That does not make me an expert on what has happened in the 50 years since or on what is happening now. But in this emotional moment, in the cacophony of opinion aroused by our distress, I want to share my feelings and my thinking with those close to me.

I feel the greatest affection for the Afghans, all those I knew and all those I do not know. All of them, including those who have cast their lot with the Taliban. I also feel great affection for the Peace Corps and great respect for my fellow volunteers, most of whom made great contributions to the lives of those with whom they worked. As it happened, perhaps because I expected too much, I was not myself able to make such a contribution. A Peace Corps volunteer signs up for a two-year stint, but I left after one year.

Along with some of my friends, I was assigned to a school for training surveyors. The principal of the school decided to use my expertise in mathematics to bolster the performance of an Afghan teacher. I would teach geometry in English, and the Afghan teacher would translate into Dari, the dialect of Persian that served as the country’s lingua franca. As my Dari improved, I realized that the translation was faulty, and soon I was teaching in Dari directly. Then I realized that a third of the students, the Pashtuns, did not understand Dari. I started studying Pashto. But the students’ written work told me that I was only befuddling them while humiliating my fellow teacher.

I was also troubled about the mission of the school, which had been founded and was funded by USAID, the American foreign aid program. The school’s graduates were supposed to survey the entire country, creating records of ownership so that real estate could be bought and sold, thus protecting the rights of owners large and small, making Afghanistan’s economic system more capitalist, more democratic, less feudal. Many surveyors had already graduated and were in the field. But, or so the gossip went, no deeds had been registered. Agreement on boundaries was not so easy to establish, and local leaders across the country had no interest in this new system.

When I talked with my Peace Corps supervisor about wanting to quit at the end of the first semester, he suggested a different assignment. He had been looking to find a way to have Peace Corps volunteers assist in the huge drainage project in the Helmand Valley, which had been launched years before by American contractors and which USAID was now trying to rescue. As a high school student in “vocational agriculture,” I was acquainted with the culture of the American agricultural experts at work there. I stood out among my peers as a bright Ivy League graduate who wanted to talk with the Afghans in their languages. Perhaps I could find a role in the Helmand project. So I spent a semester bouncing about there.

I liked the people. I liked the Americans, the experts and their families, who lived as Americans in their compounds. I liked the Afghans involved, many of whom had studied in the United States in a culture I knew and now came to meetings with Americans and tried their best to be American, to contribute to the discourse the Americans had created. I like the other hangers-on, who had found ways to straddle the cultures, sometimes slipping through narrow cracks to make themselves useful, or seem useful, to the American-led enterprise. I liked the other Afghans who stood apart and looked at us all skeptically.

But the project made no sense. Never made sense. Not when the Afghan government paid Morrison-Knudsen to work on it in the 1950s, not when I was there in 1969, not when the Americans returned to it after 9/11. The massive irrigation only made salination worse. The studies my American friends were making to justify the expense required to deal with the problem relied on fantasies about a new population of middle-class Afghans buying fresh vegetables at American prices. The whole project, the whole discourse, seemed to me disconnected from the Afghan reality.

It was this disconnection from local reality that remained for me the picture of USAID in Afghanistan. The gap between the two standards of living and the two cultures was so impossibly wide. As we had been told, Afghanistan and Nepal were the two poorest countries in the world. I calculated that the stipend of a Peace Corps volunteer was 1/15th of the salary of a USAID professional. Yet we Peace Corps volunteers were rich compared with most of the Afghans we interacted with. We hired servants with our pocket money.

The Afghan government we set up after 9/11 was corrupt from top to bottom. How does this happen? What would you do if you wanted to provide for your family when working with outsiders who operate with a standard of living so far beyond what you can attain without accommodating their every fancy and illusion?

Just the same I left Afghanistan still sharing with my fellow volunteers the belief that life would improve for everyone in the country. Our hearts were broken by what followed. Most of the people we had known probably perished in the civil wars that followed the communist takeover. So we are practiced in having our hearts broken by Afghanistan.

When the United States invaded Afghanistan after 9/11, almost all my fellow volunteers were hopeful that the country could be put on a better path. I was less sanguine. I remember how devastated I was when we bombed Kandahar. The United States had bombed all sorts of places in my lifetime, but this was a place I had lived. It felt as if our Air Force were bombing my hometown. Sadly, I had no confidence that our well-meaning forces would know what they were doing. I did not have the courage, like Barbara Lee, to say that I was against going after Osama Bin Laden. But I did say to all my friends that we would not, in 10 years, be proud of what we did in Afghanistan.

In these past 20 years, I have witnessed the hopes of my fellow returned Peace Corps volunteers, I have made my very modest donations to some of the NGOs they have supported. Like everyone I held my breath in the past few years, often averting my eyes. But we all knew, at least in the back of our minds, what was coming as the incredible spigot of dollars and military might was withdrawn.

WRITING ON THE WALL

At the 50th reunion of our Peace Corps group, we heard an American, whose family had fled Afghanistan when he was a child and who returned as an interpreter for our military, explain how security deteriorated when the Obama administration had tamped down the money spigot, narrowing immensely the number of families benefiting from the expenditures. We watched the Taliban steadily take over the countryside as our military scaled down its presence.

The vast majority of the 300,000 troops we were paying to constitute the Afghan army, we all knew, were not believers in some American vision. They were trying to support their families. Who would blame them for switching sides or heading for the hills as soon as they saw the writing on the wall?

I have been disappointed by the self-righteous anger and disapproval of President Biden’s handling of the withdrawal. To my mind, it reflects the downside of the can-do American spirit. When our military and our bureaucracy are asked to perform an impossible task, the answer is can-do. When the inevitable happens, the commenting class knows that there must have been a way to make it work.

When President Biden observes that a withdrawal agreement had been made with the Taliban, he is said to be blaming others. We are told that he should somehow have organized the evacuation of all our supporters before withdrawing the last of our troops. He should have somehow helped all these people flee without yet signaling to the government soldiers that it was time to switch sides. He should have operated the withdrawal with some magic timing. Who is kidding whom?

There are my thoughts, my feelings. Grief but not blame.

Thanks for reading this.

Glenn Shafer was born on a farm in Kansas and spent his youth there before attending Princeton University on a National Merit Scholarship.

After his stint with the Peace Corps, he completed a Ph.D. in mathematical statistics and taught at Princeton, the University of Kansas, and Rutgers University, where he is now a university professor.

He and his wife divide their time between New Jersey and Elizabethtown.

Shafer originally shared this essay on Afghanistan with family members and friends.