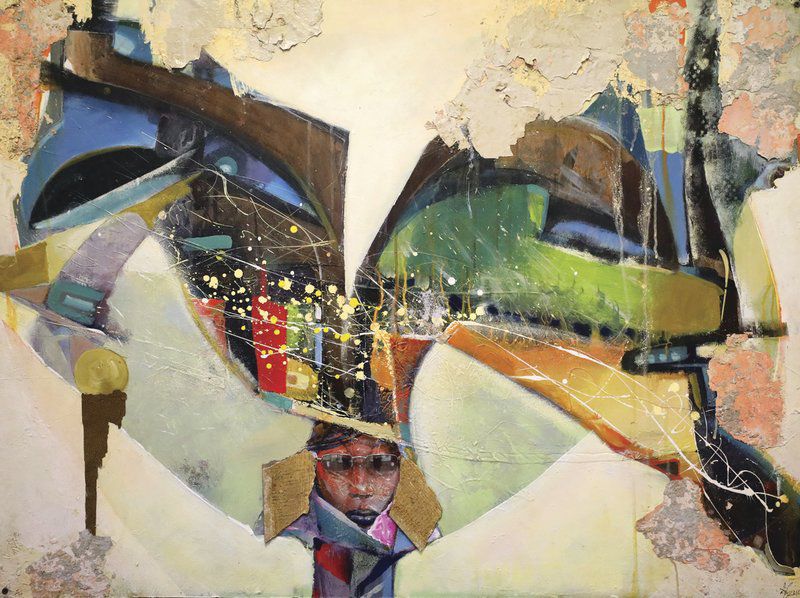 "From the Tropics to the Projects" mixed media by Al Johnson, a formally trained and internationally renowned artist who lives in Philadelphia, Pa. 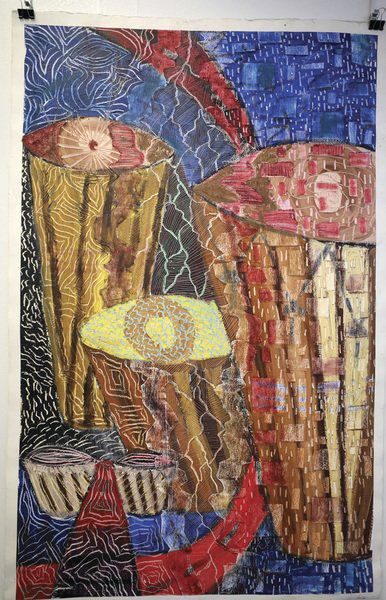 "Talking Drum #2" by Eric G. Pryor. "In order for me to actively make work, I always promised myself I needed to be actively selling and actively showing because the last thing I want to do is create a ton of work where there is no place for it to really be seen or just for it to go into a storage space in my house."

"From the Tropics to the Projects" mixed media by Al Johnson, a formally trained and internationally renowned artist who lives in Philadelphia, Pa.

"Talking Drum #2" by Eric G. Pryor. "In order for me to actively make work, I always promised myself I needed to be actively selling and actively showing because the last thing I want to do is create a ton of work where there is no place for it to really be seen or just for it to go into a storage space in my house."

Mason met her cadre of artists in New York City while plying her trade as a free-lance journalist with a niche for covering African American and Caribbean artists.

“Now, I have moved my platform on to social media," said Mason of Sunshine Media and Communications, who represents local artist Gharan Burton.

"So, I'm a social media strategist, where I do the same thing. I go out and cover arts shows, and I blast it. Because there are so many different networks, I can expand their audience."

Mason navigates artists' studios and openings as a witness, patron, friend and curator.

About “Sweet Music,” she writes:

“My title and thought centers around the notion of African-American artists of scholarship working and toiling in their field and are often never co-opted into the museum system until later in life usually at the end of an arc, (death bed) when major museums realize that there is a gap in their collection and they have neglected a whole school of contemporary thought that ran concurrent with their collection.

“And a full historical purview cannot be told without that inclusion.  Thus always the diversity rush and inclusion- playing catch-up.

“My conversation uses this assemblage of current Contemporary African-American Thought and speak again to the gate keepers, major museums etc., with a gentle nudge saying to cast a wider net; for the serpent is already eating its tail, with its current bent on elite university diversity picks.

“Scholarship and intelligence can be found off the beaten path. And sometimes refreshingly so.”

In "Sweet Music," Neals's “Uhuru," a viscosity etching, depicts the arc of the African Diaspora from a regal past to slavery and the mid-century identity politics. It's title means freedom in Swahili.

Neals was among a collective of artists, Weusi, who established Nyumba Ya Sanaa, “The House of Arts” in Swahili, a “Black is Beautiful” pre-cursor.

Art just happened to him.

“All my life I believed that it was a cousin of mine that was the influence behind my ability to paint and draw,” said Neals, a retired Brooklyn Post Office employee who rose from clerk to head illustrator.

“He was eight years older. He cared for me while my parents were working. When we came to New York, we stayed with his family. I pictured myself looking over his shoulder as he was drawing and painting.”

Neals recalls the influence of his cousin, David, in numerous print publications.

His cousin retired, returned to their Southern roots and built a house.

On a visit, Neals presented his cousin with Elton C. Fax's “Black Artists of the New Generation.”

''There's a part about you in the book.' He said, 'What are you talking about? I never drew.' But all my life I believed, I pictured myself looking at him as he was drawing but most likely it was a dream or something mystical, spiritual. Something happened.”

WOMAN OF THE CLOTH

Greene's fingers have touched fibers ever since she can remember.

“When I was growing up, I used to make a lot of my school clothes,” said Greene, a professional quilt maker, art historian, lecturer, arts consultant, independent curator and author.

“I used to make take my baby siting money and buy fabric. It became addictive, actually.”

“Sweet Music” includes three of her works, “Night in Tunisia,” “The Eye of Heru-I See You” and “King Mother of the Music World.”

The former was a commission for a jazz exhibition, and its free-motion quilting details reveal her interest in world symbols.

The crescent and star is not just about Islam per se, but symbolizes the masculine and feminine.

In the upper right quadrant, a bent trumpet is a nod to Dizzy Gillespie, who is known for blasting the jazz classic.

The quilt is a wash of color juxtaposed with black-and-white images of her, at age 6, tap dancing.

She superimposes multiples of the image in a grand, Tunisian edifice.

“If I had put a Brooklyn brownstone, it would not say Tunisia,” Greene said.

“Because I do that, it takes you somewhere different.”

The show includes “Talking Drum #2,” “Looking East-1993” and three works from his “Lake Erie Series,” when he was a visiting professor at Buffalo State College.

His works reveal his layered process, call and response, addition and subtraction, paint in and scratch out, control and discovery.

Music, his mother's jazz and his Detroit-infused R & B and funk, inform his aesthetics when he was an disenchanted artist, who segued into arts administration.

“For me, I like my work to have places to live," said Pryor, who is president of the Harlem School of Arts.

"For me, you create something and then all of a sudden it gets a home because someone falls in love with it. That inspires me to make more work. It's like my kids; I want them to see them do well in the world. I want to see them go out and spread their wings and have independence, and I think of art in the same way. When I make my work, I really want to see it hopefully attract someone and go home with them. It doesn't need to stay with me because I end up falling in love with the next thing I am making anyway. “