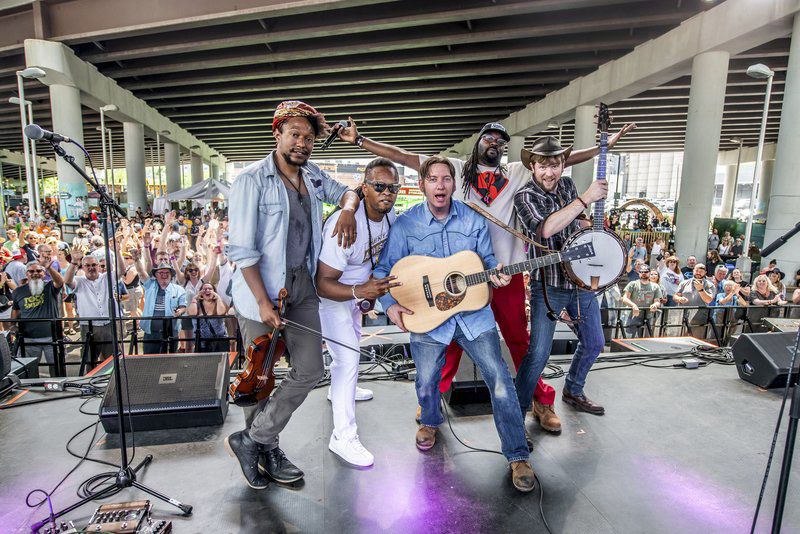 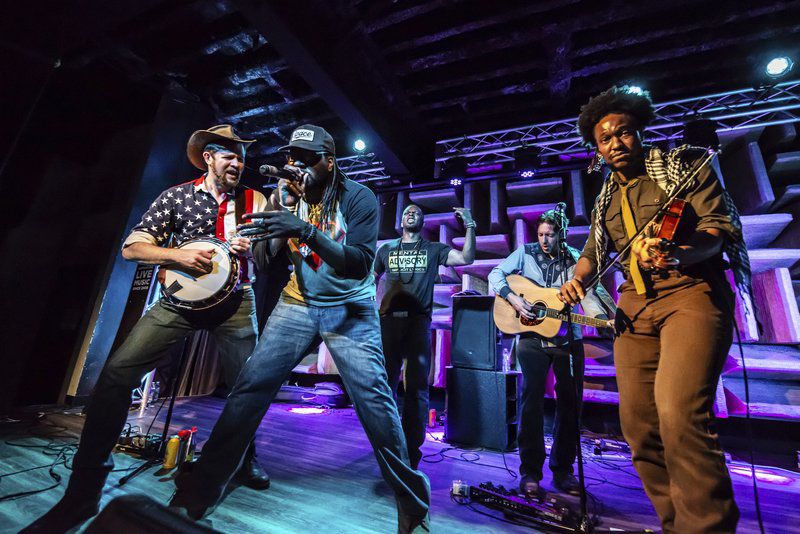 PLATTSBURGH —Gangstagrass sounds like a cannabis blend, but it is band leader, Oscar Owens, AKA Rench's tantalizing twist of bluegrass and hip hop musical styles.

To some it may seem a disparate fusion, but Gangstagrass is not an anomaly but part of a musical continuum.

The banjo, a bluegrass staple, is of African origin after all.

Bluegrass is the intersection of English and Celtic ballads and dance tunes by European immigrants in Appalachia where it brushed up against the folk music, blues and jazz, of descendants of enslaved people of African descent.

The band's master mind, Rench, is a California native who has lived in Brooklyn the last quarter century.

“My dad was real into music,” he said.

“He played a little bit but not professionally. I just started listening to lots of music growing up and started learning more and more instruments and starting bands and stuff by the time I was in junior high.”

Rench started the violin at 4, and he plays guitar, fiddle, bass, drums, keys and mandolin, but he's known for his beats.

“Especially for me, really the computer production is definitely a specialty of mine in terms of making beats and exploring different sonic territory," he said.

"That's where I'm coming from is sort of the guy with his hands on the knobs trying to make some new sounds.”

He aspires to innovate, to do what hasn't been done before.

“One inspiration for me is Graham Parsons but not in terms of the sound I'm making but in terms of the idea of crossing these cultural boundaries with music that people think are so separate," Rench said.

"What he was doing in the '60s in terms of doing music that was simultaneously psychedelic rock for the hippies rock and classic country for the rednecks who really felt each other should be non compatible. He was straddling both worlds."

The synthesis of country and hip-hop goes back to the latter's beginning.

“There is a track by an early hip-hop group called The Disco Four called 'Country Rock and Rap' that came out in the early '80s,” Rench said.

“It's kind of funny that there's so many vehicles of people doing it since then as well, a track here and a track there. Not many people who took it on as their whole project but there's been a lot of histories of different bands doing it for a song just kind of as an experiment.”

"Almost 20 years ago, I started looking at it seriously as something not to do just to dip my toe in but to think about what if somebody really kind of did that as their whole project."

The divide between bluegrass and hip-hop is the perception of difference.

"We're definitely delving into and what to talk to people about is how much this divide is really just a matter of perception that has been put on us by the music industry for decades and decades," Rench said.

"The earliest recordings going back to the '20s was a matter of record companies deciding that they had a segregated audience they had to sell music separately even though sometimes it was the same music."

Southern music was played by white bands and black bands and a mixture of the two.

"All kinds of different people playing stuff and influencing each other, but the record companies decided to sell some of it to white folks and label it hillbilly music and sell some if it to black folks and label it race music event though a lot of times it was actually the same music," he said.

"That's what kicked up decades of having separate charts and separate magazines and separate radio stations for stuff that really had the same roots and was coming from the same place and diverged from there simply because the way it was presented separately."

When Gangstagrass started, it was fantastic for Rench to discover the common ground between MCs and bluegrass pickers.

"Really just different vocabulary for the same things," he said.

"Bluegrass and hip-hop both being folk music and music from the people who wanted to get together and jam together with what they had. They have a lot of the same techniques really that are based on improvisation and spontaneity and able to share a vocabulary."

Bluegrass musicians have a tradition of sitting in a circle and calling out chord progression or a traditional song and trade solos around a circle.

"They call that a pick, and hip-hop when you have some people get in a circle and trades some verses and do some free styling it's called a cypher," Rench said.

"Once you get these guys together and you say a pick and a cypher is the same thing, it clicks. They say, 'Oh yeah, we know how to do this.'

"The MCs know they can freestyle a verse point to the banjo player and have him pick a solo. They have that same tradition fundamentally to work off of, so it really clicks and we take advantage of that in our life shows to take provide that kind of of that spontaneity."

The band's lineup has changed over time, but Rench assembles his crews by word of mouth and even via Craig's List back in the day.

“To me it makes a lot of sense and something I see as very accessible,” he said.

“When I'm producing it, I feel like it's something that would really resonate with people."

Gangstagrass plays to audiences in Brooklyn, Kentucky, California and Texas.

"Really different people in different places, but coming out to get down to the same music," Rench said.

"A lot of times, even within the same place, people who would expect to see each other at the same show showing up and saying, 'You like this? You like this?' and starting to feel like they might have some common ground and get down together. It's kind of a pleasure to see that happen at our shows."

Musical and cultural divides like this don't exist in Europe.

“It's interesting because I don't think Europeans have the same history as being sold these genre myths and separation,” Rench said.

“They actually find it really easy to appreciate just on the level of American music, which a lot of people there really enjoy. When they hear it's hip-hop and bluegrass, they don't as much of that barrier of thinking that they're incompatible. We get a really good reception there from people who take it on pretty easily and say 'American music is great, and these are just different facets of it.'”

Rench was familiar with the Gibson Brothers, but he didn't realize Eric and Leigh Gibson and Mike Barber were born and bred here in the North Country.

But he knew Mitchell Graham, “Peso 131,” a classic hip-hop pioneer, was here.

“He was in the Fearless Four and was one of the pioneering graffiti artists in the city. We are connect with him while we're there and have him come up and do a little bit with us as a special guest.”