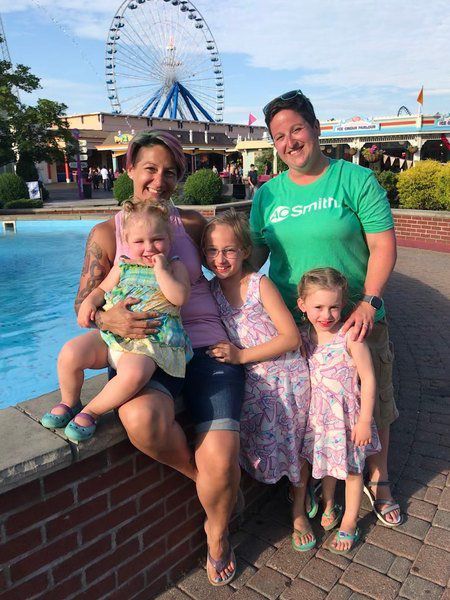 PHOTO PROVIDED Crystal and Kirsten O'Jida-Blair pose for a photo with their daughters, Olivia, Liah and Jazlynn, at Six Flags in New Jersey this past summer. 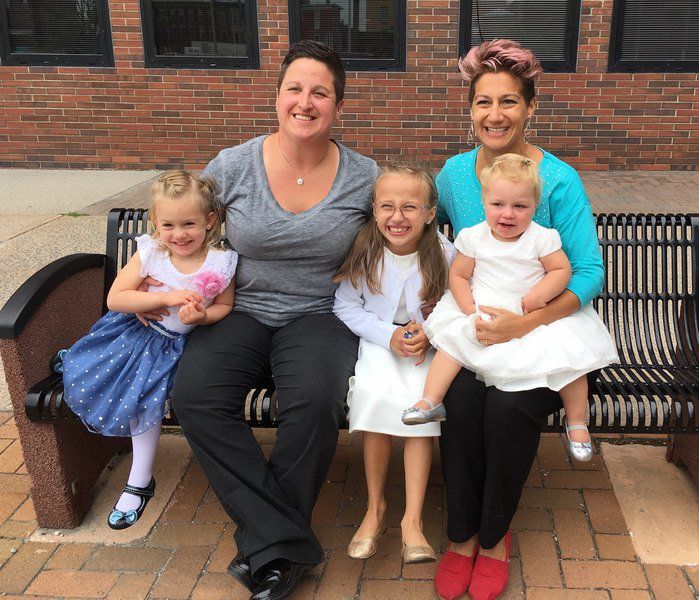 PHOTO PROVIDED  Kirsten and Crystal O'Jida-Blair sit with their daughters, Jazlynn, Liah and Olivia outside the Clinton County Government Center on July 3, 2018, the day they adopted Jazlynn and Olivia.

PHOTO PROVIDED Crystal and Kirsten O'Jida-Blair pose for a photo with their daughters, Olivia, Liah and Jazlynn, at Six Flags in New Jersey this past summer.

PHOTO PROVIDED  Kirsten and Crystal O'Jida-Blair sit with their daughters, Jazlynn, Liah and Olivia outside the Clinton County Government Center on July 3, 2018, the day they adopted Jazlynn and Olivia.

PERU — Crystal O’Jida-Blair loves to stand behind the kitchen counter that looks out onto her daughters' play area in their Peru home.

“Last night, we’re having a dance party and, you know, we have a karaoke machine, so the two little ones are singing and the oldest is doing this dance to Old Town Road on Kidz Bop,” she recalled Monday.

“This is my favorite spot in the house because I see everything.

Crystal and her wife, Kirsten, decided to become foster parents because they wanted to have more children.

After Crystal gave birth to Liah, who is now eight, following four attempts to conceive, both women tried unsuccessfully to get pregnant for a couple years.

Then, Charity and Dana Frusco, friends of theirs who had become foster parents, convinced them to take the Model Approach to Partnerships in Parenting training classes.

“I honestly didn’t want to do it,” Kirsten said.

Thinking that taking the classes would bring Crystal to her side, Kirsten agreed to do the training.

But something she heard during one of the very first classes struck her.

Liah was involved every step of the way, doing "homework" assigned by the trainer to prepare her to be a foster sister, Crystal said.

Crystal and Kirsten taught her that kids would come to stay with them, but only for a little while.

On Dec. 30, 2016, they got the call from the Clinton County Department of Social Services about two little girls, Jazlynn and Olivia, who were 21 months old and 11 days old at the time, respectively.

“They had nothing but the clothes on their back that didn’t fit and smelled terrible,” Crystal recalled.

DSS was able to provide some supplies and vouchers, then the O'Jida-Blairs went into divide and conquer mode.

They called their best friend, Sandra Madden, to ask her to help Crystal with the kids at home.

Kirsten took the DSS vouchers to shop for supplies like a crib mattress and clothing.

Crystal's boss of 16 years, Linda Baker, had them over for spaghetti and, a grandmother herself, helped them with supplies.

When they first arrived, the girls did not smile, laugh or cry, Crystal said.

They had to go straight to the doctor’s office; Olivia, also known as "Livy," was barely five pounds and could not regulate her body temperature.

“Failure to thrive and now she’s this awesome, shiny kid,” Kirsten said, with Olivia, now three years old, seated next to her.

She added that foster parents are taught to tell themselves every day that they have someone else’s children.

“And you have to and it hurts,” Kirsten said. “You absolutely have to do that and you prepare yourself.

“But you can’t help but fall in love with them.”

One of Jazlynn — now four years old — and Olivia’s family members did come forward in March 2017 and took them for a long weekend.

“(You have) mixed emotions because you’re glad family stepped forward because that’s really what it’s about, (but) you’re sad because you cared for them and loved them,” Crystal said.

Liah stepped up for her moms during that time.

“We’re crying and we’re like, you know, ‘It’s okay honey, we’re just happy that they’re happy,’ and she goes, ‘Mommy, but this is what it’s about,’” Crystal said.

“It was great because that’s what we taught her."

Though Liah's wisdom made it better, getting the girls back took the cake.

“That was kind of a test of being able to go through the heartbreak but trying to make yourself really realize it’s a beautiful thing,” Crystal said.

By the following Christmas, the O’Jida-Blairs found out that DSS was planning to push for termination of parental rights.

The caseworker broached the topic with the girls’ biological parents in January 2018 and, by springtime, they made the decision to give up their rights.

“But they wanted to have one last meeting with us and ask us questions ... and we said, ‘Absolutely,’” Crystal said.

They wanted to know how Crystal and Kirsten would raise Jazlynn and Olivia, whether they would take them to church, if they would have them baptized and if they would know who their biological parents were.

The day after the meeting, the parents went to court and signed their rights away.

The O’Jida-Blairs officially adopted Jazlynn and Olivia on July 3, 2018.

JUST GO FOR IT

Crystal would advise anyone on the fence about doing the training to just go for it or attend informational sessions and events.

She pointed out that respite care, which requires the same training, is also an option and emphasized that parents have a lot of leeway in determining what fits in their homes.

For example, she and Kirsten never wanted Liah to be a younger sister.

“We didn’t mind respite for older (children), but we just knew the dynamics of our house would not fit for Liah to be a younger sister.”

Kirsten added that foster parents are given a giant list to determine their parameters.

Being mothers to three has changed the dynamics of date night, Crystal said.

“We used to play cards or rummy together, now we’re playing matching games and last night we just played this game they got for Christmas called 'The Floor is Lava' and it’s hysterical.”

Kirsten said it seems like an impossible dream come true.

“Right now, I feel like this is the best part of my life. This is what I always dreamed of."

She shared a quote that hangs in their dining room and sums up how she feels about their situation.

“If you think our hands are full, you should see our hearts.”