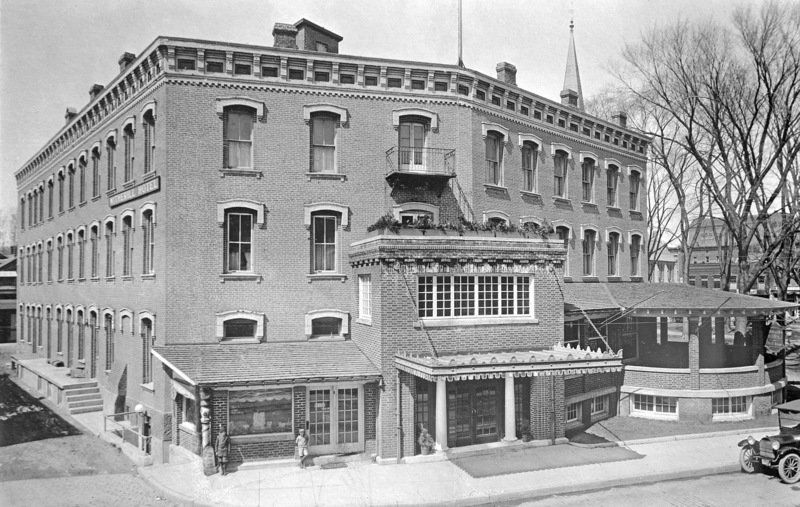 The Witherill Hotel at 25 Margaret St. in Plattsburgh. 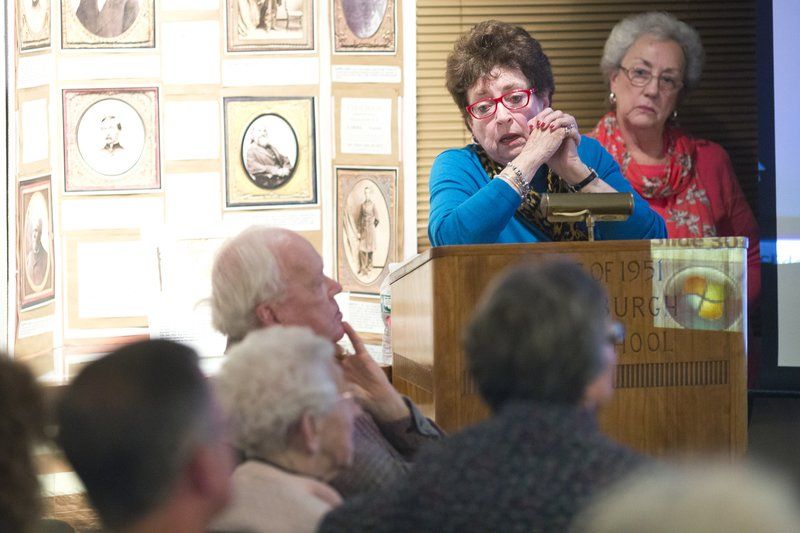 Author Susan Howell Hamlin (left), daughter of William Hull Howell Jr., former owner of the Witherill Hotel, which once stood at 25 Margaret St. in downtown Plattsburgh, discusses growing up in the historic hotel with her sister, Bonnie Howell (right), during a presentation at the Clinton County Historical Association in Plattsburgh. 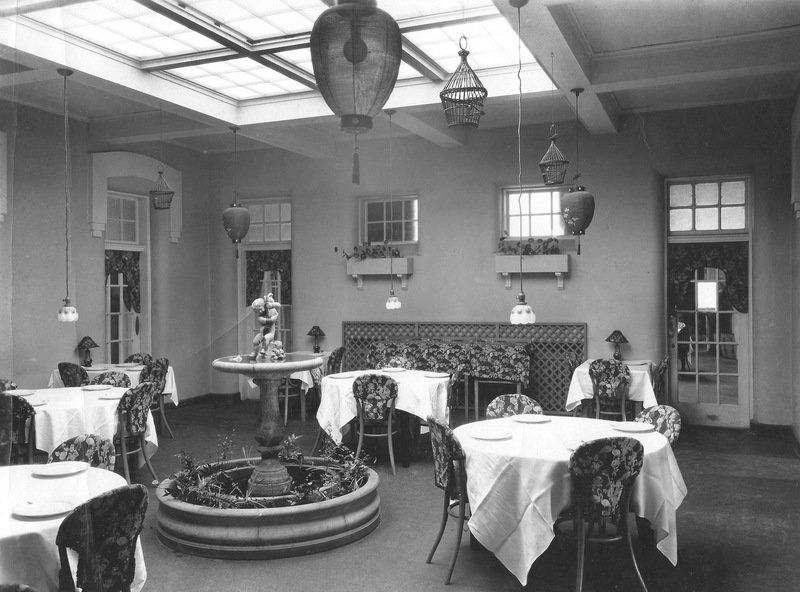 The Grill Room at the Witherill Hotel. This room later became known as the Fountain Room. 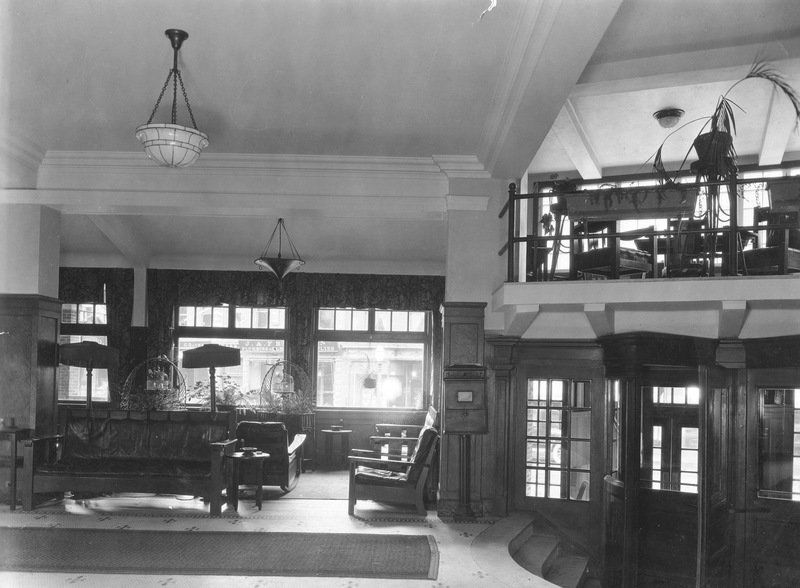 The lobby of the Witherill Hotel circa the 1920s. The hotel's writing room can be seen above the revolving doors. 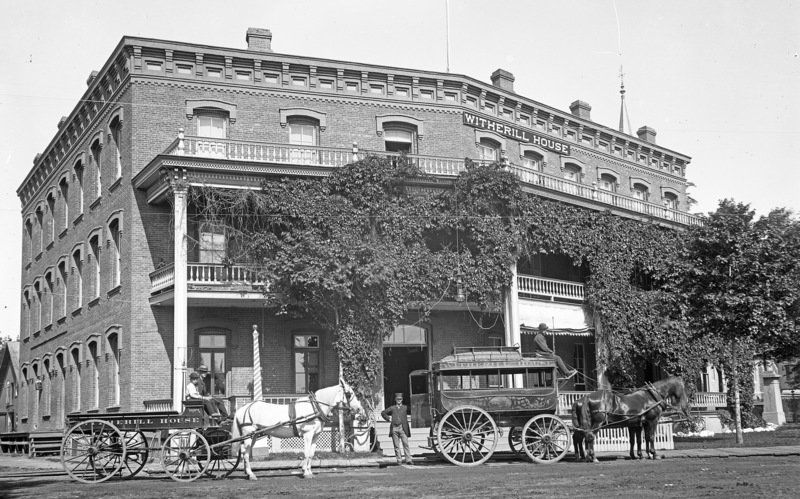 The Witherill Hotel on Margaret Street just south of the Federal Building. Some of the hotel staff stand with the horse drawn guest and luggage carriages. Note the dirt street and wooden sidewalk.

The Witherill Hotel at 25 Margaret St. in Plattsburgh.

Author Susan Howell Hamlin (left), daughter of William Hull Howell Jr., former owner of the Witherill Hotel, which once stood at 25 Margaret St. in downtown Plattsburgh, discusses growing up in the historic hotel with her sister, Bonnie Howell (right), during a presentation at the Clinton County Historical Association in Plattsburgh.

The Grill Room at the Witherill Hotel. This room later became known as the Fountain Room.

The lobby of the Witherill Hotel circa the 1920s. The hotel's writing room can be seen above the revolving doors.

The Witherill Hotel on Margaret Street just south of the Federal Building. Some of the hotel staff stand with the horse drawn guest and luggage carriages. Note the dirt street and wooden sidewalk.

Long before 25 Margaret St. became a place to withdraw cash and deposit paychecks, it was a destination that many called home for the night.

As the likes of U.S. presidents, governors and senators checked in and out of the Witherill Hotel's well-kept guest rooms, Plattsburgh residents and visitors flocked to the establishment for elegant meals, adult beverages and social gatherings.

"It had a grand ole life and saw a lot of things happening,” Susan Howell Hamlin told the crowd of former Witherill staff and patrons who gathered at the Clinton County Historical Association for her presentation on the hotel, where she and her sister, Bonnie Howell, grew up.

The program was based on Hamlin's new book, "Welcome to the Witherill: a retrospective on Plattsburgh's landmark hotel and the family who owned it," for which she has given the Historical Association exclusive retail rights.

The book is available for $29.99, with all proceeds benefiting the association.

The Witherill first came into Hamlin's family in 1884 when her great grandfather, William T. Howell, purchased the establishment.

At this time, the hotel featured a stable in the back.

“Guests brought their horses and buggies very often, and it was as costly to keep your horse in the stable as it was to stay overnight in the Witherill," Hamlin said. "The Witherill at that point, by the way, had 18 guest rooms and one tin bathtub.

"If you wanted a bath, the bellhop had to lug up pails of hot water.

"I have a feeling people didn’t bathe very much back then.”

"When daddy graduated from the University of Pennsylvania, he had wanted to go to law school, but the depression was going full bore out here, and Grandpa wanted him to come back and manage the hotel," Hamlin recalled. "So he really had had no inn-keeping experience.”

To remedy this, Howell Jr. went to New York City and spent a year washing dishes and working the front desk at the Lexington Hotel before returning to Plattsburgh.

Using pictures and anecdotes, Hamlin took attendees of her presentation on a room-by-room tour of the Witherill, which would remain in her family until the late 1960s.

In a photo circa about 1920, she pointed out a writing room located on the balcony-level of the hotel lobby.

“There were no computers back then," Hamlin noted. "People had to write letters.

"The Witherill generously provided stationary and envelopes … and the letters were posted right there.”

Also in the picture can be seen two canary cages.

"Grandpa loved canaries and always had canaries either in his office or in the lobby," Hamlin said.

In addition, the ceiling of the Witherill lobby was wallpapered, something her grandmother, Rose Howell, saw to.

Eventually the hotel came to have 75 guest rooms, according to Hamlin, each of which was also adorned with a different wallpaper.

"They all had Priscilla curtains," she said. "The curtains would be washed and stretched on these stretchers and dried and then put back up in a room.

"And I suspect they would get very yellow very frequently because people smoked in the rooms."

The Witherill featured only twin beds, she added, and "all housekeeping staff had to learn to make a good square corner because contour sheets were not available."

Just off the hotel's lobby was the Green Room, which featured a fireplace and, of course, green walls.

"There was other-colored carpet and patterned carpet on the floor, but it was a neat room," Hamlin recalled. "Originally, I believe, back in my great grandfather's time, it had been the bridal suite."

The hotel's Fountain Room was assembled right after World War II, she continued, and had been the Grill Room before that.

"I'm not sure when the fountain was installed in the middle, but it had a recirculating pump," Hamlin said.

Canaries were kept in this space, too, for a while, she noted, "but the room wasn't lit unless it was in use, and it was just too dark for the birds, so they were moved to Grandpa's office, I believe."

The Fountain Room was also host to cocktail parties, buffets and dancing.

“Of course, the kind of a focal point was the stained glass window," Hamlin said.

This was purchased, most likely by her grandparents, from a mansion in Plattsburgh in about 1920.

"It was installed after World War II," Hamlin said. "Back lit by natural light, it was a lovely, lovely piece of stained glass."

In a photo of the Witherill's Main Dining Room, waitstaff can be seen donning period costumes.

These were worn by all hotel employees, including bellmen, housekeeping staff and bartenders, from 1959 to 1960 in celebration of the 350th anniversary of the discovery of Lake Champlain and the 75th year of the hotel being in the Howell family.

"My dad worked with the Williamsburg Foundation in order to try to make as authentic costumes as he could," Hamlin said.

Another of Howell Jr.'s touches was the Fife and Drum, which he established on the hotel's lower level.

“This restaurant and bar opened, appropriately, July 4, 1940, and as far as northern New York was concerned, it was the place to go," Hamlin said.

The Fife and Drum exuded a lighthearted military theme, and patrons could have themselves a full lobster dinner for $3.

While she and Bonnie lived at the Witherill with their parents, the family had no kitchen in its apartment.

"We ate off the menu as kids and pretty much could order whatever we wanted, but mother said, 'don't order anything expensive,'" Hamlin recalled.

Each day, the menus were produced at a print shop, as there were no computers or home printers to run them off.

"Everyday they had new ones, which I find amazing," said Hamlin, who devoted a section of her book to menus and recipes from the hotel.

Among these are directions for making her grandmother's corned beef, which were also featured in the 1966 Ford Times article, "Famous Recipes from Famous Restaurants."

Living at the Witherill with the family at one point was Penny, a male collie named after Howell Jr.'s alma mater, the University of Pennsylvania.

"Penny had the run of the hotel, and if he had to go out and do his business, he'd go to the front door and one of the bellmen would let him out," Hamlin recalled.

The dog, however, became protective of the family, she continued, "and Grandpa and Daddy were afraid he might bite a guest and that would make a lawsuit, so they gave him to a farmer nearby and he lived his life happily ever after as far as I know."

'THING OF THE PAST'

Things began to change for the Witherill in the mid- to late 1960s with the creation of the Adirondack Northway, which brought chain hotels to Route 3 and took people away from downtown Plattsburgh.

"The small hotel was kind of becoming a thing of the past," Hamlin said.

The Witherill had no air conditioning, and the guest rooms, heated by steam radiators, were becoming a bit dated, she noted, "so Daddy realized that in order to be competitive, he would have to do major, major overhaul of the infrastructure."

But with Howell Jr. approaching retirement age and realizing he couldn't recuperate the costs of the renovations in his lifetime, he made the difficult decision to close the family business.

“The doors were locked — the first time the hotel doors had ever been locked in the entire existence of the hotel — on Sept. 30, 1968," Hamlin said.

While much of the Witherill's contents were auctioned off, she noted, "Mother and Daddy saved a few of the antiques for Bonnie and I."

The building was purchased by the State Bank of Albany and torn down the following year. The property is now home to Glens Falls National Bank.