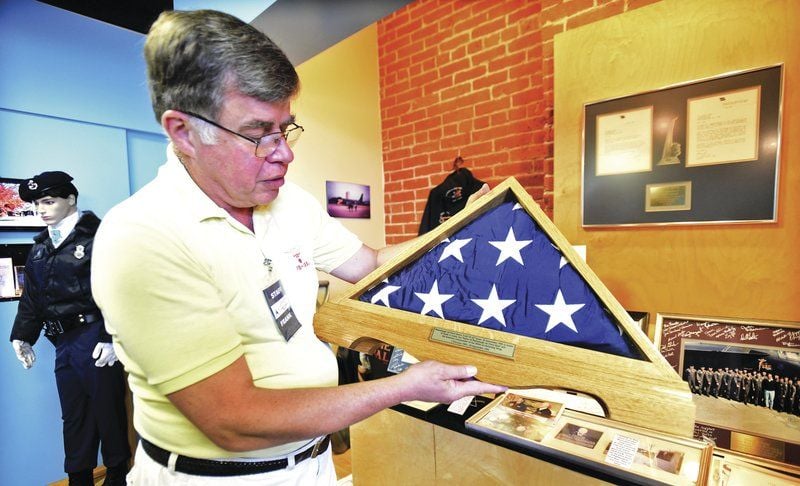 ROB FOUNTAIN/STAFF PHOTORetired USAF Lt. Col. Frank Baehre holds a shadow box containing the last flag that flew over the base, taken down on Sept. 30, 1995. “When they lowered the flag for the last time, Clyde Lewis Sr. was presented the flag,” said Baehre, who is curator of the Plattsburgh Air Force Base Museum. 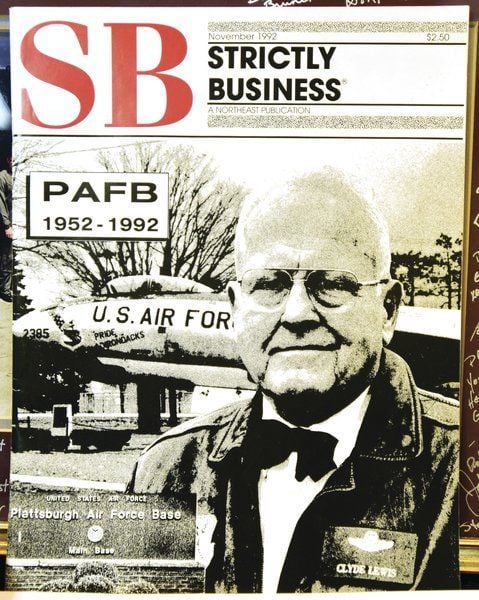 ROB FOUNTAIN/STAFF PHOTORetired USAF Lt. Col. Frank Baehre holds a shadow box containing the last flag that flew over the base, taken down on Sept. 30, 1995. “When they lowered the flag for the last time, Clyde Lewis Sr. was presented the flag,” said Baehre, who is curator of the Plattsburgh Air Force Base Museum.

PLATTSBURGH — Plattsburgh Air Force Base might never have been without the work of the late Clyde A. Lewis Sr.

He spearheaded the push to get the Pentagon to build a base here in the early 1950s.

And he continued to lead support for the base for decades after that.

Lewis, a local lawyer, was a former U.S. Air Force B-17 bomber pilot who flew 37 missions over the European Theater during World War II.

“And squadron commander for the 480th Bomb Wing,” said his son, the Rev. Clyde A. Lewis Jr., pastor of St. Patrick’s Church in Rouses Point and St. Mary’s Church in Champlain.

“He came back to Plattsburgh. He got involved in the VFW.”

Mr. Lewis worked his way up through the state and national ranks of the Veterans of Foreign Wars and became its commander-in-chief shortly before the Pentagon began pondering a new northern installation to counter the Russian threat during the Cold War.

“He had a great deal of love for his country,” Rev. Lewis said.

“He served in war and the VFW, and he wanted to use this patriotism to bring the Air Force Base to Plattsburgh. He worked tirelessly.”

One of the exhibit’s artifacts is a program from a testimonial-dinner that honored Mr. Lewis.

“He was honored by the men and women of the 8th Air Force as ‘our American Patriot,’” said Frank Baehre, museum curator and a retired lieutenant colonel, who was stationed twice at the base.

“Mr. Lewis was instrumental in bringing the Air Force Base to Plattsburgh and being one of its dominant supporters the entire time it was here up until the final closure.”

The exhibit also includes a shadow box containing the last flag that flew over the base, on Sept. 30, 1995.

“When they lowered the flag for the last time, Clyde Lewis was presented the flag,” Baehre said.

Thirty years later, he was one of 105 men appointed by Mayor John Tyrell to the Plattsburgh Air Base Liaison Commission to establish the base.

The commission was successful in its endeavor, and a “Victory Dinner” was held on May 16, 1953, at Plattsburgh City Hall Auditorium.

Angelos was as jubilant as his peers, though he had only been an American citizen since April 6, 1951.

“He was an immigrant,” said S. Peter Angelos, Peter's son and a retired general surgeon who practiced at Champlain Valley Physicians Hospital. “He came in illegally.”

His father eventually gained his citizenship through political connections.

"He was quite a patriot really," said Mina Angelos, Peter's daughter-in-law.

Gordie Little covered the base, literally, on the ground and on the airwaves.

“I was just a flag waver because I worked on construction to help build the base in the early '50s,” said Little, a former radio newsman who lives in Morrisonville.

“I felt obligated and pleased to support all the missions of Plattsburgh Air Force Base.”

During the debate for the expansion of Champlain College, which educated a plethora of World War II veterans, and the new Air Base, Little’s opinion program on WIRY aired the pulse of the community.

“People were against the Air Force being here,” he said. “A lot of people called in to express their points of view whether the Air Base should be here, activists and pacifists."

Little wrote the script for the famous “The Plattsburgh Story.”

But the Base Realignment and Closure Commission edited that tale permanently in closing PAFB.

"Base commanders and wing commanders said this was the best base on the face of the Earth in terms of its marriage between base and community," Little said. "It was unique in that respect.

"Many people wanted to stay here when they retired. I think that is a tribute to this area and the people here. "

Every FB-111 flight crew member trained at Plattsburgh, including Joseph McNichols, a fighter pilot who came as a lieutenant and left as a colonel after 18 years.

“Plattsburgh had the best relationship with the community of pretty much any Air Force base in the country," said the Cliff Haven resident and former 380th Bombardment Wing director of operations and, later, 380th Air Refueling Wing operations group commander.

McNichols recalls the high-ranking military brass who attended the civic testimonials, “more than a memorable event," hosted by the Plattsburgh Air Base Liaison Committee.

“Clyde (Lewis) used to mandate they come in,” McNichols said. “He was a pretty powerful little guy."

Business and civic leaders throughout the Plattsburgh community were members of the committee, including William “Bill” Rowe III, one of the 71 honorary commanders of the base.

“My father came up here a year before they opened the base,” said Rowe, who is the proprietor of Adirondack Mall and founder of Rowe Boats International.

“My father was an honorary commander. He was the Buick dealer in town.”

The Rowes attended many functions on the base.

“It was such an asset with the people who came, intelligent fighter and bomber pilots,” Rowe said.

“They were incredible assets to the North Country.

"They blended in with the North Country really well.”

Marking two decades since the closure of Plattsburgh Air Force Base, the Press-Republican this week is examining the far-reaching impact it had on the economy and culture of the community while here, the decision to shut it down and where we stand 20 years later.

Tomorrow: Local crime during and after PAFB.

The Plattsburgh Air Force Base Museum is hosting a PAFB Closure Commemoration at 5 p.m. Wednesday, Sept. 30, on U.S. Oval.

The event will be held at the flag pole on the Old Base Oval, now known as the Plattsburgh Barracks Veterans Park.

During the event, the American flag that flew over the original closure ceremony will be flying and then be ceremonially lowered once again.

In the event of rain, the event will be held in the theater of the War of 1812 Museum at 31 Washington Road, also on the former Air Force Base.

The event is open to all.