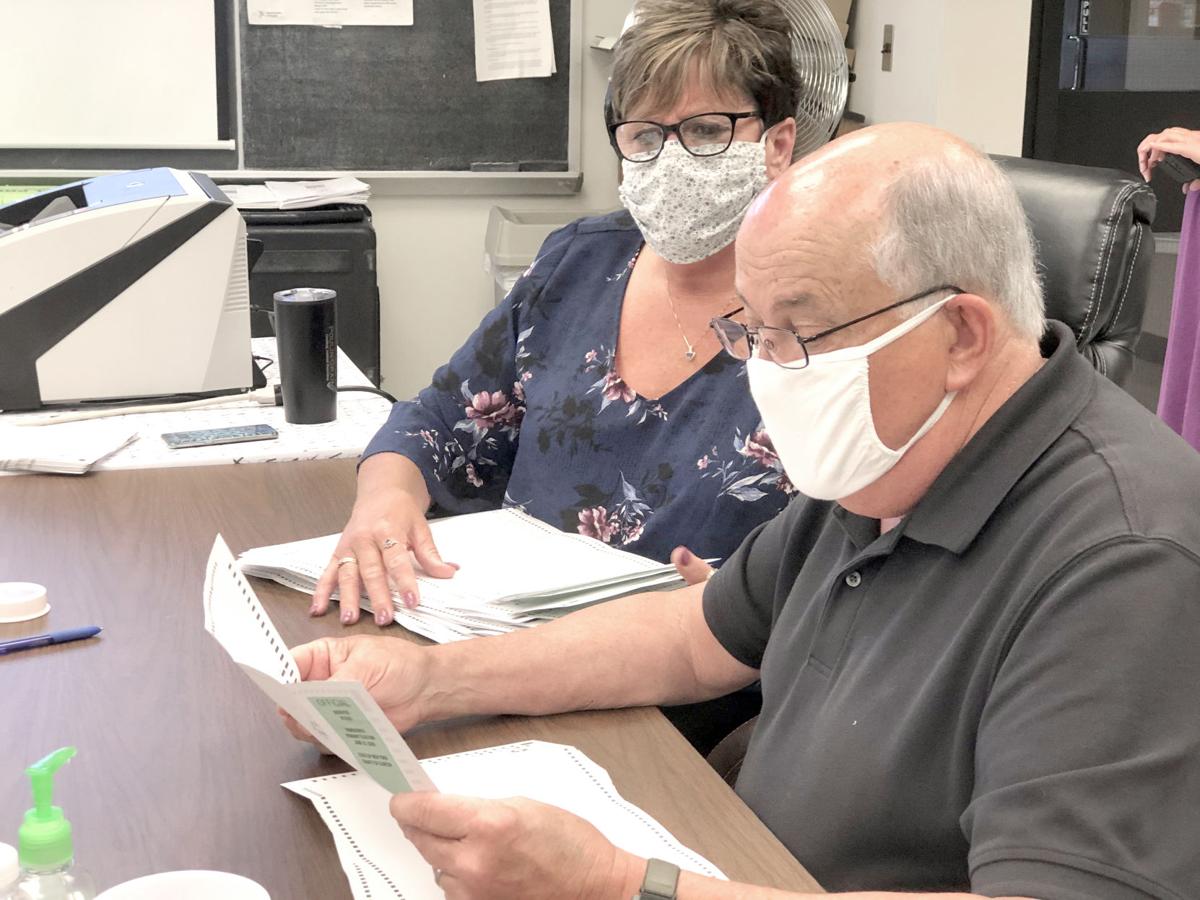 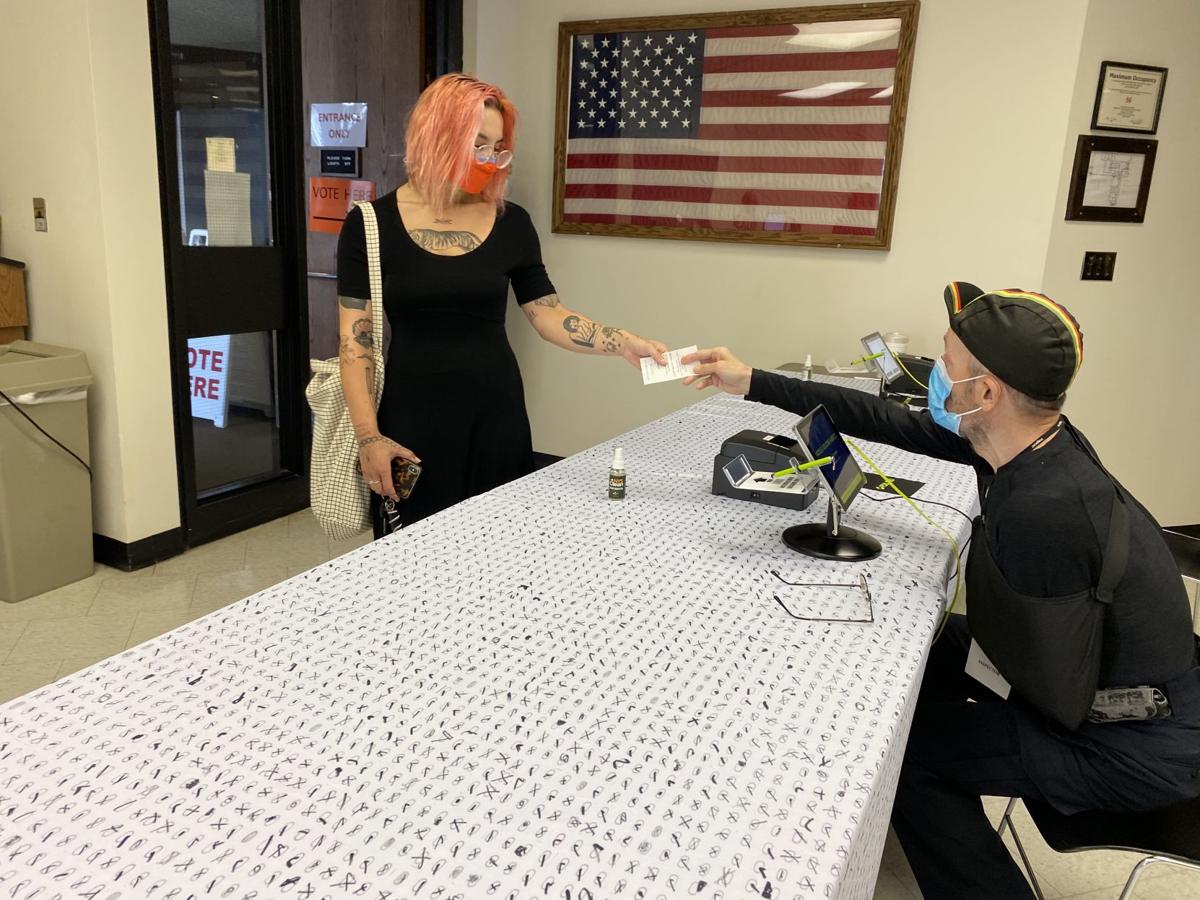 Jim Fleury, poll worker of five years, hands Nicole Delcore-Kaifetz her voting information printed from a Poll Pad. Fleury’s advice to voter’s this election season is: “Get back into the habit of voting in every single election. It has to be a habit. Don’t miss elections.”

Jim Fleury, poll worker of five years, hands Nicole Delcore-Kaifetz her voting information printed from a Poll Pad. Fleury’s advice to voter’s this election season is: “Get back into the habit of voting in every single election. It has to be a habit. Don’t miss elections.”

"With over 1,300 absentee ballots yet to be tallied we expect these numbers to change," the Area 9 Clinton County legislator told The Press-Republican Tuesday night.

"Regardless of the primary results, we'll keep pushing our message, sharing our plan for Plattsburgh and fighting for votes all the way to November."

The initial, and unofficial, votes reported by the Clinton County Board of Elections were those cast during the 9-day early voting period and at the polls on Tuesday, June 23, or Primary Election Day.

Democratic Commissioner Mary Dyer had shared disappointment with the early voting turnout, noting less than 100 eligible voters had showed up countywide during its first seven days.

According to Tuesday night's tallies, between early voting and Primary Day, 627 City of Plattsburgh Dems had gone out to cast a vote for their mayoral pick.

The unofficial votes had shown Rosenquest with 342 votes followed by Read with 177 votes. Downtown businessman Tenzin Dorjee had snagged 105 votes and there were three write-ins.

In light of the continued COVID-19 pandemic, Dyer had thought absentee ballots would be a popular way to cast a vote this Primary Election Day.

For the city's mayoral primary, 1,329 absentee ballots had been issued and by Monday afternoon 927 had been received by the Clinton County Board of Elections.

Commissioners would begin counting those votes, which required a June 23rd postmark, on July 1.

Dorjee posted his response to the results via the Tenzin for Mayor Facebook page, which has nearly 800 followers.

The downtown restaurant owner said he had chosen not to campaign "out of respect" due to the ongoing global health crisis and the hardships it created.

"While each one of us is concerned about putting food on the table I could not get myself to send out mailers and reach out to people for their support," the post reads. "I have felt insulted seeing mailers in my mail and I felt that most would have had the same feeling as me.

"This I state as my personal feelings and in no way meant to (reflect) how others chose to conduct themselves."

Dorjee went on to express gratitude for his supporters, stating it was their trust and support that allowed him to run for the mayor's seat.

"Irrespective of tonight's outcome I will remain an engaged citizen for the betterment and equality of all without prejudice," the post continues. "I remain the same person as before and will continue to engage and support my community when called upon."

Mayor Read said he would continue to focus his energy on getting the Lake City "through the COVID-19 pandemic, figuring out how to recover from a terrible economic shock and troubled by the injustice and divisiveness that we all know must be addressed.

"Maybe I'm having to do this on a larger scale, but all of our residents and our businesses are facing the same challenges right now," he told The Press-Republican Tuesday night.

"We'll get through this, though."

Rosenquest said the pandemic had created campaign challenges, but wanted "to thank all of the voters who came out to cast their vote for my campaign. That means a lot.

"It's clear our city residents want a leader in City Hall that can prioritize our financial stability at the same time be inclusive and transparent."

The Clinton County legislator thanked his team for their efforts with his campaign, as well.

"It's something I truly appreciate and I can't thank them enough."

More than 1,400 of Clinton County's Democrats showed up to the polls to vote in the presidential primary.

The unofficial results showed 840 voters, or 59.7 percent, had selected Joe Biden, while just over 400 had cast a vote for Bernie Sanders.

Closest behind were Elizabeth Warren and Pete Buttigieg, who had collected 47 and 42 votes, respectively.

Clinton County Board of Elections says 4,014 absentee ballots were issued for this election. As of Monday, 2,680 had been returned.