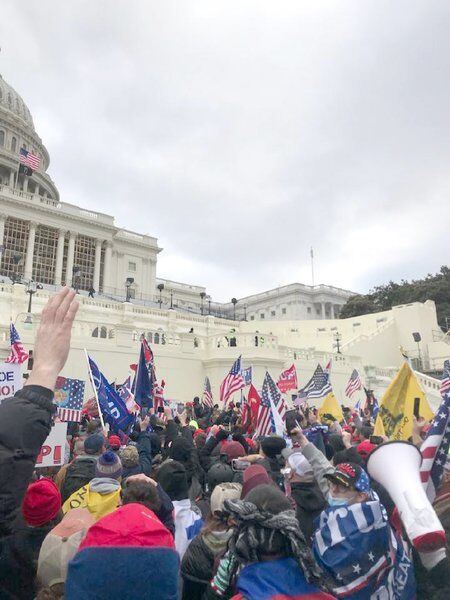 CHRIS GILLEN/PHOTOChris Gillen of Peru was among those who made their way to the U.S. Capitol building in Washington, D.C., following a Jan. 6 rally in support of President Donald Trump. He said he was not one of the people who stormed the building that day. 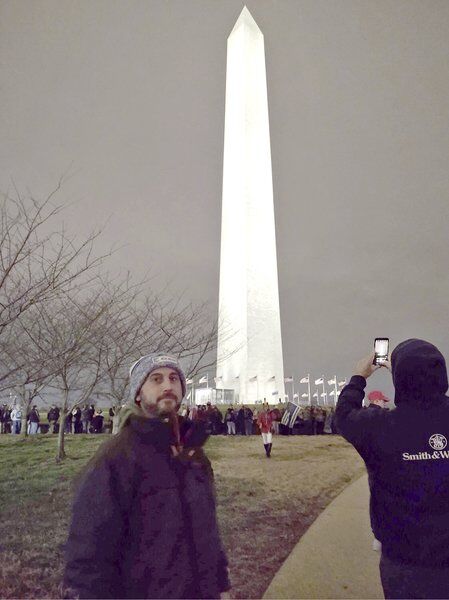 PHOTO PROVIDEDChris Gillen of Peru poses for a photo in front of the Washington Monument in the early morning hours of Jan. 6. The U.S. Marine Corps veteran went down to Washington, D.C., because he felt people’s voices should be heard and he wanted to see for himself how the events of the day unfolded.

CHRIS GILLEN/PHOTOChris Gillen of Peru was among those who made their way to the U.S. Capitol building in Washington, D.C., following a Jan. 6 rally in support of President Donald Trump. He said he was not one of the people who stormed the building that day.

PHOTO PROVIDEDChris Gillen of Peru poses for a photo in front of the Washington Monument in the early morning hours of Jan. 6. The U.S. Marine Corps veteran went down to Washington, D.C., because he felt people’s voices should be heard and he wanted to see for himself how the events of the day unfolded.

PLATTSBURGH — For Peru resident Chris Gillen, the storming of the U.S. Capitol building by supporters of President Donald Trump last week had some degree of inevitability due to the disconnect between those who run the country and their constituents.

He described a different life for lawmakers: surrounded by law enforcement, living in very nice homes and inaccessible to those they represent.

“I think it was a matter of time — the message needs to be sent that they are not untouchable,” the U.S. Marine Corps vet, who voted for Trump in November, told The Press-Republican.

“They can’t expect to divide and pit us against each other and never expect it to end up on their doorstep.”

Gillen was one of thousands who traveled down to Washington, D.C., on Jan. 6 for a Trump rally held the day the House of Representatives and the U.S. Senate, in a joint session presided over by Vice President Mike Pence, were slated to count and certify the votes of the Electoral College.

Following the rally, which took place at the Ellipse, thousands marched to the Capitol. There, a riot that overtook the building sent Pence and members of Congress into hiding, temporarily suspending the certification of President-elect Joe Biden’s victory.

Five people, including a U.S. Capitol police officer, died during the violence.

Gillen, who did not break into the Capitol, said he made the trip down to Washington D.C. because he felt it was a time to stand up and for people’s voices to be heard.

“It’s about showing up, speaking out and showing the world that this isn’t just a couple thousand people. It’s a lot of fed-up people.”

Gillen and a friend arrived in D.C. around 6 a.m. Jan. 6, at which point thousands were already gathered in the area around the Washington Monument.

He recalled standing in line for a few hours before people started pouring into the Ellipse. There, Gillen said, he did not see any physical confrontations, just people talking and music playing.

While in the Marine Corps, he served two tours in Iraq, so it can be difficult for him to be in large crowds.

“It’s the safest I’ve ever felt among so many people.”

But Gillen was most surprised by the wide array of people from all walks of life who showed up to support the president. He saw “Iranians for Trump” and people from China supporting the end of the Chinese Communist Party.

Gillen remembered watching speeches by Trump’s personal attorney, Rudy Guiliani, and the president, who he said told those gathered to let their voices be heard.

People then made their way to the Capitol. As Gillen got to within about 200 yards of the Capitol lawn, it was hard to see if there were any barriers.

“We didn’t really know where we could be and couldn’t be.”

As he got closer, he heard what he described as the noise of two artillery cannons and saw smoke.

Drawing from his military training, he sought to assess the situation. The sight of people climbing the scaffolding was Gillen’s biggest concern.

While pepper spray and gas came at the crowd, he found he couldn’t really go backwards, and he was not interested in going forward. He said he knew better than to try to go inside the Capitol.

NOT TRYING TO STOP

Gillen made his way out of the crowd to the left side the Capitol building, where he could see people pounding on windows and doors.

After he returned home, he reflected on how he saw five U.S. Capitol Police officers off to the side, not trying to stop people. The same went for a much larger contingent, he continued, as protesters made their way up the steps.

Gillen speculated that perhaps the officers were not willing to protect lawmakers they felt vilified them when outcry came for police reform in the wake of George Floyd’s death over the summer.

Gillen said, based on his observation, there were far more people just standing in the streets than breaking into the Capitol building.

That a few people went with the former is “just like any group of people when they assemble,” he contended.

“This is the people’s house. They (lawmakers) have a job to do, they swore an oath to protect us, and they go to Washington and forget us.”

There are people who think getting Trump out of office will unite and solve everything, and that is not the case, Gillen said.

He argued the establishment has turned its backs on 74 million people who voted for Trump who are frustrated both by thoughts of their rights being under attack.

“I don’t necessarily support the man and his conduct all the time,” Gillen said. “What I don’t support is politicians … running on the same issues every four years. Why do we need to entrust our faith in them when they’ve failed us time and again?”

With the belief that the two-party system has long failed the United States and sought to divide most Americans, Gillen is departing from the Republican Party in favor of the Patriot Party of the United States. He has taken part in organizing the New York State chapter, which he said will partake in bi-weekly meetings.

According to Gillen, the party is neither right- nor left-leaning, and is about being inclusive of everyone and reaching out to those who feel disenfranchised and ostracized.

"It's not some pro-right extremist group. It's moreso about taking back the parties and the system in which we nominate those to be elected," he said, adding that he feels the Republican and Democratic parties have become big businesses.

He noted people’s anger over watching the COVID-19 pandemic ravage the country, shuttering small businesses and forcing families into tough choices even as federal lawmakers never missed a paycheck.

Gillen supports term limits and takes issue with a system that grants members of Congress full benefits after five years, but requires 20 years of service for servicemembers to receive the same.

He acknowledged U.S. Rep. Elise Stefanik’s (R-Schuylerville) objection to the certification of some electors and doing what she had to do to appeal to North Country voters, and said she did not get enough credit for being bipartisan.

“But at the end of the day, she’s part of the system that needs to be changed.”

'WE'RE ALL WORTH IT'

As the House was slated to vote on impeaching the president for "incitement of insurrection" Wednesday, Gillen said he believed following through on that would further divide people. He called the action a “last effort of political grandstanding by the Democrats.”

That blame for the riot would be placed on Trump and the attempt would be made to prevent him from ever holding office again was not unexpected, he added.

“(Lawmakers) would love nothing more than the attention to go away from Washington so they could go back to business as usual.”

Gillen did not have plans to attend D.C.-area protests in the near future, but said that he would make the trek again for future hearings on “Big Tech” and election integrity. He said what’s important to him is policies and how they affect Americans.

“I really care, you know,” he said. “We’re all worth it, and for that I’d be willing to give everything.”