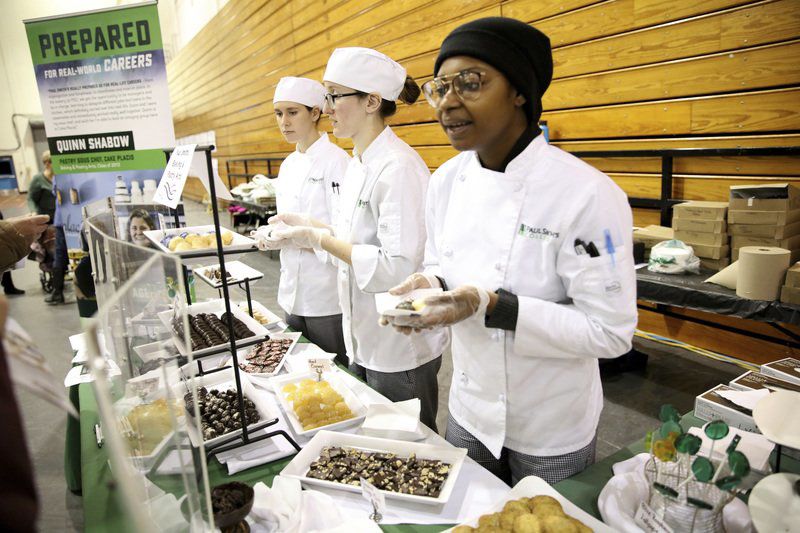 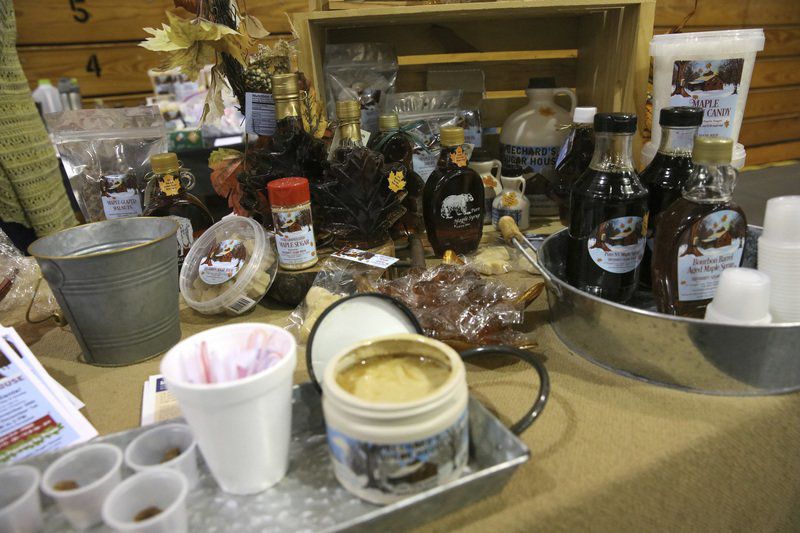 KAYLA BREEN/ STAFF PHOTO A wide variety of maple products, including syrup, sugar and candies, sit on display, along with samples of each, at the Bechard’s Sugar House booth during Taste of the North Country. 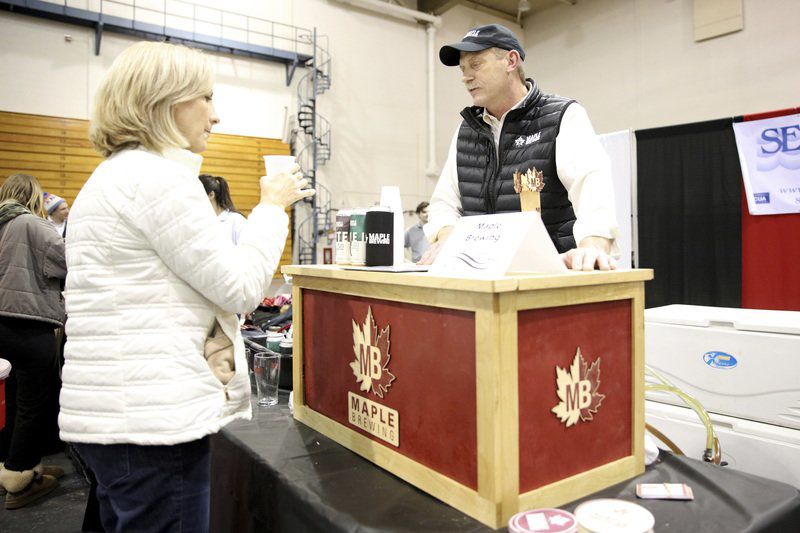 KAYLA BREEN/STAFF PHOTOAkwesasne Mohawk Casino Resort Director of Food and Beverage Toby TenEyck shares a Maple Brewing beverage with a visitor to the Taste of the North Country event. Maple Steak & Ale is an eatery at the casino that serves Maple Brewing’s signature brews, according to the casino website.

KAYLA BREEN/ STAFF PHOTO A wide variety of maple products, including syrup, sugar and candies, sit on display, along with samples of each, at the Bechard’s Sugar House booth during Taste of the North Country.

KAYLA BREEN/STAFF PHOTOAkwesasne Mohawk Casino Resort Director of Food and Beverage Toby TenEyck shares a Maple Brewing beverage with a visitor to the Taste of the North Country event. Maple Steak & Ale is an eatery at the casino that serves Maple Brewing’s signature brews, according to the casino website.

Anthony's Restaurant & Bistro, located on Route 3 in the Town of Plattsburgh, was prepped and ready to serve the event's guests with steaming Butternut Squash Bisque.

That creamy soup, which had hints of cinnamon and just a little spice, was a Taste of the North Country staple.

The restaurant's on-hand representatives Deb Rasco and Jim Golovach said the Plattsburgh-based restaurant had attended the chamber's annual event for as long as they could remember.

"We always bring the Butternut Squash Bisque," Rasco said. "It's the taste of Thanksgiving."

The North Country Chamber of Commerce event, which displayed 15 local vendors and put about 300 area products up for auction, has help from about 20 or so volunteers.

While visitors walked the event's outer circle to taste treats made by North Country restaurants, sugar houses, breweries and culinary school students, they could simultaneously bid on hundreds of auction items.

Among that mix, Chamber Executive Director Jody Parks said, were items donated by local wineries, eateries and stores, as well as a range of other businesses.

"There's everything from airline tickets to toilet paper," Parks said. "One benefit of donating an item for the auction is to support the chamber."

By the end of the night, the executive director expected the North Country Chamber of Commerce would have raised between $20,000 and $25,000.

"It's one of our major fundraisers," Parks said. "The chamber does a number of them throughout the year, just so we can continue to provide the services that we do, while keeping membership dues low."

Servicing some 3,200 members of the business community, it sits among the state's five largest chambers and offers assistance in various sectors, including that of economic development, small business support and tourism promotion.

Not only do items donated to the Taste of the North Country event support that initiative, Parks thought they were a good opportunity for the area businesses to heighten consumer interest.

"People may have forgotten that Georgia-Pacific produces Quilted Northern toilet paper, but then they see that name here and think, 'I have to make sure I buy that brand when I'm shopping,'" she said as an example.

"Or if you give a gift certificate for $50, people might come in with friends and end up spending $100," Parks continued.

"It's just a good reminder."

For the second consecutive year, Bechard's Sugar House, which operates more than 9,000 taps and counting, set up a table at the event to show off the popular northeastern delicacy.

Tammy Bechard, wife of sugar-shack founder, Marvin, brought an array of treats that displayed the many ways maple sugar could be transformed.

Those grades differed in color and, according to Tammy, the darker the color, the more concentrated the maple flavor.

"It all depends on the weather, honestly," she said of the process. "It usually starts off with the golden syrup, the lighter syrup, at the beginning of the season.

"Then it goes amber, sometimes darker."

Tammy said it had been difficult to determine just how much product to bring to Taste of the North Country this year.

Last year, she said, the sugar house had brought a little too much.

"So we cut back on a lot of things," Tammy said. "We brought more of a variety, though, than we did last year."

Tammy felt it was important to have maple producers present at an event that showcased the North Country's flavors.

"It gets your name out there more," she said. "It's all about talking and explaining the maple production process to people."

The culinary arts programs from both CV-TEC and Paul Smith's College had a showing at the chamber event, too.

The Paul Smith's students, dressed in traditional white chef's uniforms, handed out the class's homemade desserts to Taste of the North Country guests.

Associate Professor and Pastry Chef Amy DeWitt said the Franklin County-based college had brought 10 students to the event and had packed a variety of chocolate goodies and confections.

"We've been working on this for three weeks," DeWitt said, adding that the Sophomore students had started by learning the theories behind sugar and chocolate.

"We brought a lot of bonbons, like raspberry and orange," she said. "We also brought multiple confections — sugar, candies as opposed to chocolate — like peanut butter fudge and pralines."

The benefit of such an event for her students, DeWitt thought, was customer interaction.