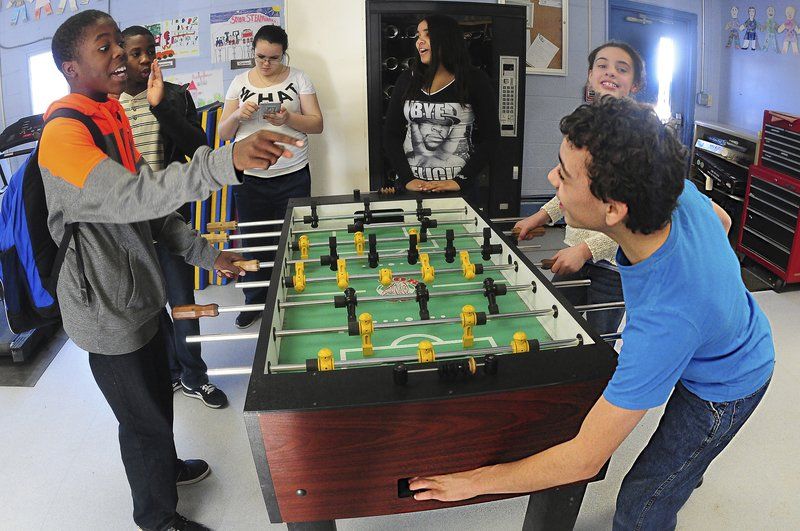 Kids play a heated game of foosball Monday at the Ted K. Center in Plattsburgh. The center and SUNY Plattsburgh have launched a community-wide effort to collect 1 million redeemable cans to fund center activities. 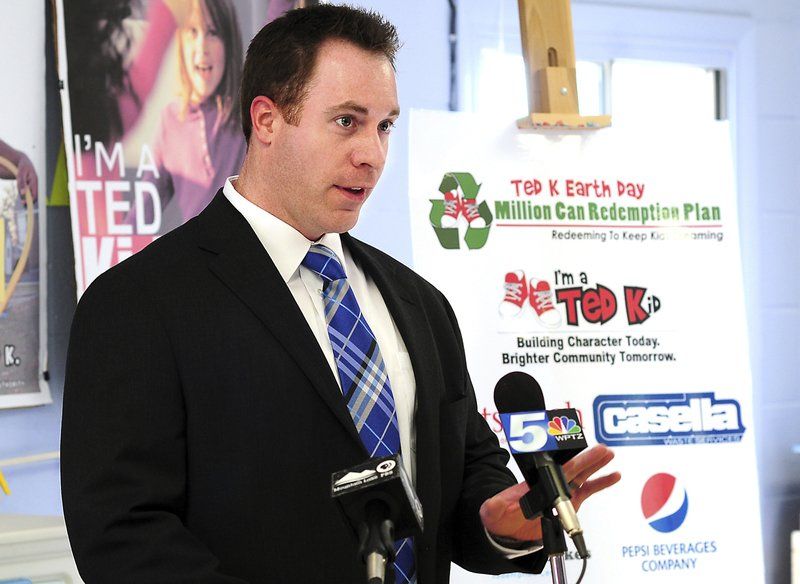 Kids play a heated game of foosball Monday at the Ted K. Center in Plattsburgh. The center and SUNY Plattsburgh have launched a community-wide effort to collect 1 million redeemable cans to fund center activities.

PLATTSBURGH — This spring, SUNY Plattsburgh students are hoping for a whole lot of redemption.

A group from the college's public-relations program has teamed up with the Ted K Center to launch the Million Can Redemption Plan, a project aimed at collecting 1 million redeemable bottles and cans throughout April.

All proceeds from the campaign will benefit the center, which provides children and families residing in Plattsburgh Housing Authority developments with enrichment opportunities, including early-childhood, after-school and summer programs.

“We are incredibly excited for this," Housing Authority Executive Director Mark Hamilton said at a press conference to announce the project on Monday afternoon.

Specifically, the Can Plan will raise money for a new van for the center.

When it's not breaking down, the current Ted K van, which is several years old, allows the center to take kids to the beach, YMCA and on hiking outings and other field trips.

"That van helps us to get out to many, many other activities in the community," the center's educational coordinator, Tom Neale, told the Press-Republican in a separate interview.

The initiative also serves as a tribute to Earth Day, as recycling 1 million bottles and cans will conserve energy, prevent the emission of greenhouse gases and save landfill space.

More than 50 of SUNY Plattsburgh's student groups, including clubs, athletic teams, fraternities and sororities, have signed on to collect bottles and cans for the campaign, according to Projects Leader Marissa St. Laurent.

She is a senior at the school and a member of Associate Professor Colleen Lemza's public- relations campaigns class, which is behind the event.

“Our commitment is to work with this group of students to get out there and knock on doors to collect the cans, to take out cans from various collection sites (and) to leverage our other partnerships with a wide variety of other agencies," Michael Cashman, assistant director of the Center for Student Involvement at SUNY Plattsburgh, said at the conference.

The college's clearinghouse for student volunteerism, Project HELP, will be part of that effort, he said.

In addition, Casella, Pepsi, Northern Cakes and TOMRA have signed on to sponsor the plan.

The students hope to get more businesses, as well as Plattsburgh residents, involved.

"We can’t do it without different business leaders taking on this initiative," St. Laurent said.

Now through April 30, Plattsburgh residents can bring their bottles and cans to Northern Cakes Redemption Center, located at 133 Sharon Ave., and sign a form to donate them to the campaign.

Starting April 1, residents can leave donations in a tractor trailer, which will located behind the Field House by the outdoor track between 9 a.m. and 3 p.m. on Mondays and Wednesdays.

Businesses can also arrange for volunteers from Project HELP to pick up bottles and cans on a weekly basis during April.

In addition, SUNY Plattsburgh athletes will be conducting neighborhood sweeps on weekends in April to collect donations. Residents can leave their cans and bottles in bags outside their homes for pickup.

"We want this to be a community wide-event," St. Laurent said.

For more information about the Million Can Redemption Plan campaign, contact Colleen Lemza at 570-7898 or lemzaca@plattsburgh.edu.