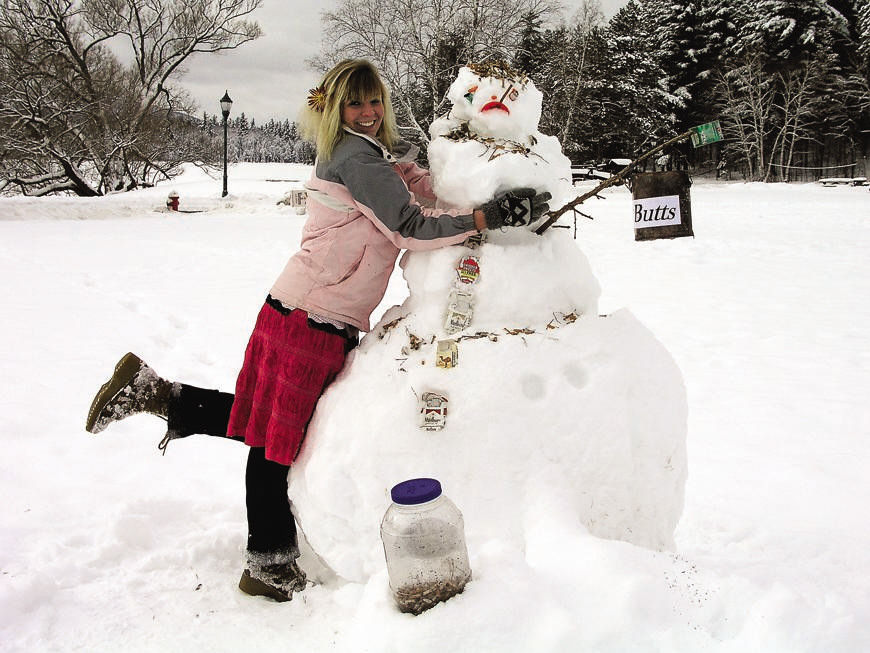 Garrretson hugs Smokey the Snowman on the college common, despite his cigarette-butt belt and red frown. 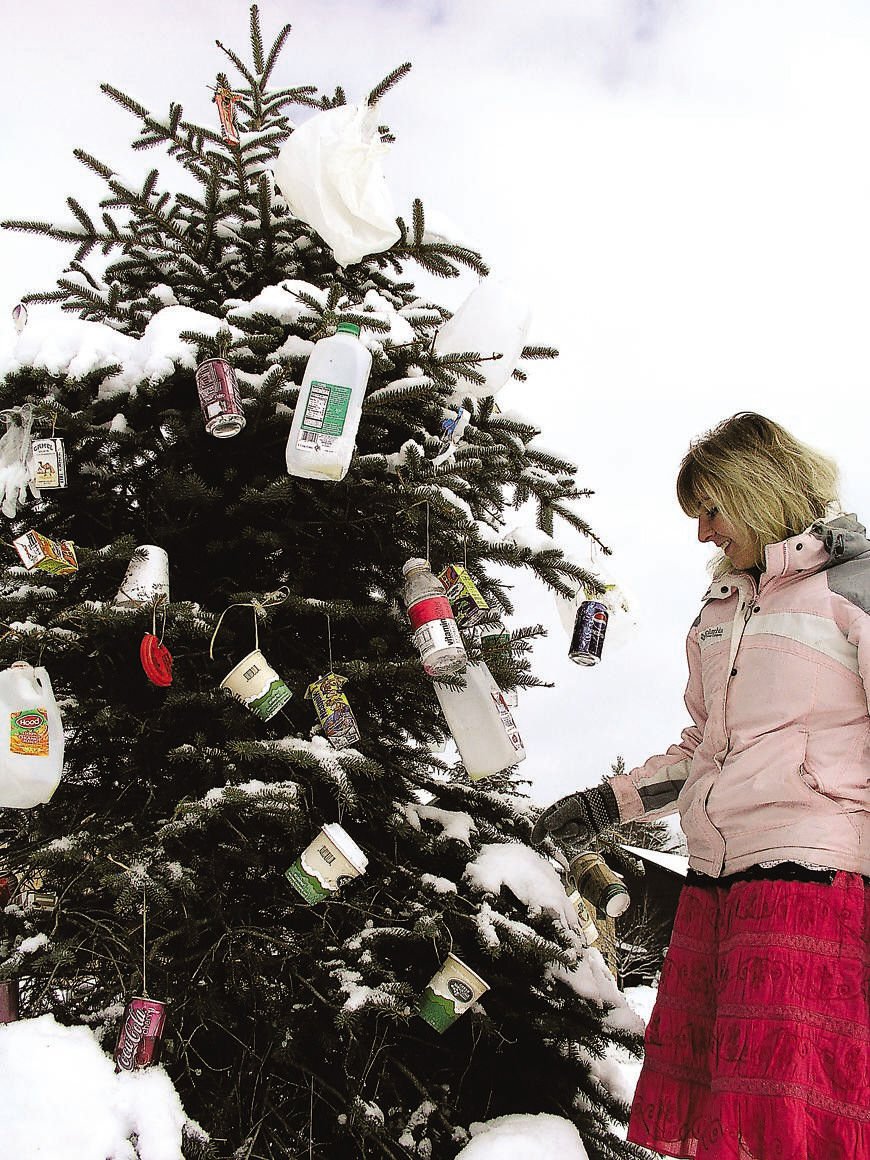 Bethany Garretson, a junior at Paul Smith-s College, with one of the five Christmas trash trees decorated in litter picked up around campus to send a message: Be respectful of Earth. 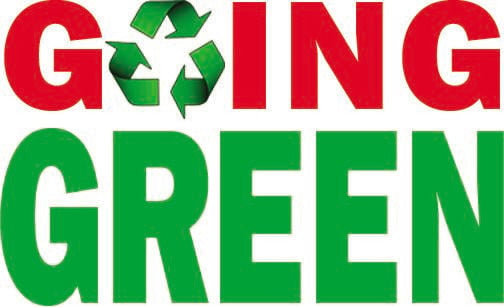 Do you know someone who is "Going Green" -- changing lifestyle or business to lessen their environmental impact? Let us know at news@pressrepublican.com.

Garrretson hugs Smokey the Snowman on the college common, despite his cigarette-butt belt and red frown.

Bethany Garretson, a junior at Paul Smith-s College, with one of the five Christmas trash trees decorated in litter picked up around campus to send a message: Be respectful of Earth.

Do you know someone who is "Going Green" -- changing lifestyle or business to lessen their environmental impact? Let us know at news@pressrepublican.com.

PAUL SMITHS -- Five Christmas trash trees grace the commons at Paul Smith's College. Laden with fresh snow, the boughs are trimmed with soda cans, torn plastic bags and brown-stained coffee cups dangled off colored ribbons. "At least it's not on the ground," said Bethany Garretson, 21, a junior. Hanging as it does, like ugly on evergreen, the trash sends a message that Garretson and her entire natural-resource economics class wanted to share. "This is our campus; this is our home," Garretson said. "It's our Earth." A few dozen feet away from the trees, Smokey the Snowman, decorated in tossed cigarette butts, wears a definite frown, like a disgruntled groundskeeper. He and the trees are made with trash and discarded butts the class found on the ground around campus. "That was the grossest part," Garretson said of plucking butts off the lawn and walkway. DISGUSTING' What began last fall when Garretson started cleaning butts off the sidewalks turned into a lesson in policy. "Midway through fall, I just started picking them up because it bothered me so much. My goal was to pick up 100 cigarette butts a day. It was disgusting." The trash issue seemed counter-intuitive at a college renowned for environmental focus in a natural setting, Garretson said. "So I made the suggestion in a newspaper column that each professor dedicate one class per semester to campus cleanup." Course work in natural-resource economics went to practical applications at about the same time, said course professor Jeff Stilman, and they found out about the campus butt and litter policy. "It fit very, very nicely into where we were at that point in the curriculum," he said. "We talked a lot about policy and how it's made," Garretson said, "and I wondered if the college needed a new policy about campus cleanup." ADVOCATING FOR THE EARTH After meeting with student government and college President John Mills, Garretson found out that everyone is supposed to smoke 25 feet from college dormitories and buildings. With help from a few classmates, she rolled a giant stump 25 feet from one building and parked a butt can on it. "I also learned that cigarette butts are the No. 1 form of litter found on earth," she said. "One in every three cigarettes smoked is flicked on the ground, and it takes 12 years for a filter to decompose. They get into the water, where fish and birds eat them, so it really hits the Earth three times: smoke in the air, butts on the earth and water, and they cause fires. I just want to make it better." And, in charting a course for new policy, the Paul Smith's College class spent a day picking up trash, which now decorates the campus common. Garretson considers litter a disorder of throw-away culture. "When someone throws something away, it's a release -- like it's not their problem any more. The message is be respectful,"' she said. Working with the class brought the project fully into focus. "The best way to come up with a great idea is to work with a group of people," Garretson said. "I've been blessed with a class like this," Stilman said. But the true measure of awareness will come with spring. "It's going to be interesting to see when the snow melts," Garretson said. The Christmas trash trees have about five days of infamy left before the limbs are cleared and the garbage goes where it was supposed to go in the first place. And Smokey the Snowman, covered with butts, likely won't come to life under any magic top hat. Garretson said, some day, she hopes to find work doing just what she's doing now, advocacy on behalf of the planet. "I'll always work for the Earth." kdedam@pressrepublican.com