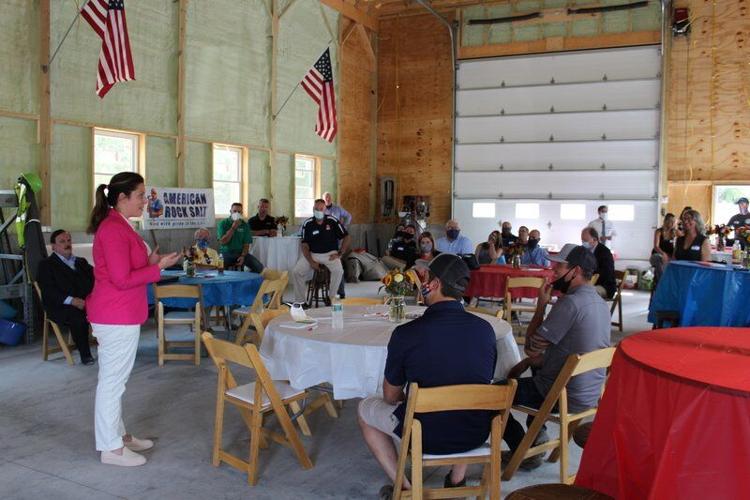 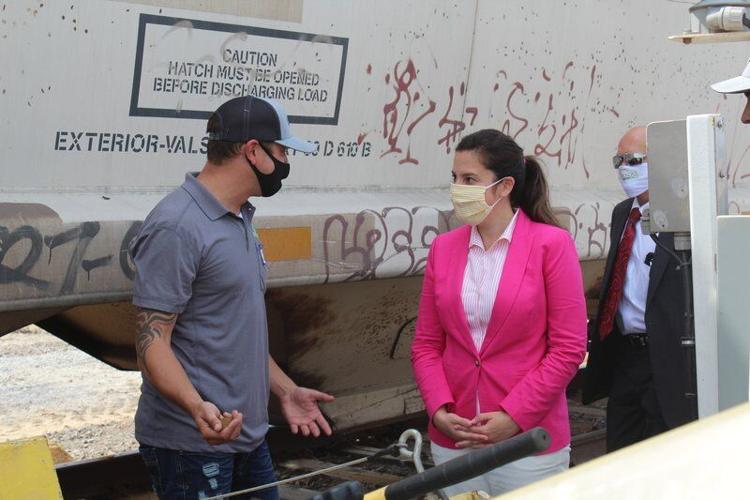 PLATTSBURGH — One of the biggest challenges for his roofing business is a lack of skilled workforce in the area, Donny Phaneuf says.

“Normally it’s a struggle, but this year it’s been a really big struggle," the third-generation roofer told North Country Congresswoman Elise Stefanik (R-Schuyleville) during a visit and tour of Lake Champlain Roofing Thursday.

Lake Champlain Roofing LLC, located on Route 9, was the first of two Plattsburgh stops Stefanik made.

Donny and his wife, Kim, also own DMP Rentals.

He started the roofing business 21 years ago and currently oversees about 14 employees, though he noted that number is usually 18 to 20 during peak season.

Donny said the additional federal unemployment benefits put in place due to the COVID-19 pandemic have made it easy for people not to come back to work.

Echoing previous statements, Stefanik said she supports ramping down those extra benefits in favor of incentivizing going back to work.

Lake Champlain Roofing does work year-round, but most of it takes place from April through November, so the timing of when COVID-19 first hit and led to a shutdown of many businesses put them back, Donny said.

Certain components of the business were deemed “nonessential” for a time by New York State. Lake Champlain Roofing has both a commercial and a residential crew.

And Donny said they were still feeling the pain of obtaining raw materials such as rubber and shingle products, with hurricane-like delays of up to six weeks.

“If I was in any other state besides New York, insurance would be a lot easier, and when I say a lot easier I’m saying it’d be less than a third of what you pay in New York.”

There are few companies that can bid for Lake Champlain Roofing’s insurance, which allows the company to operate legally and legitimately, he said.

Stefanik said insurance is a state-level issue, with regulations driven by what is happening downstate.

She acknowledged the need to protect the workforce, already a top priority of small business owners.

“We need to change the leadership in Albany and make sure that we have leaders in Albany that understand small businesses and specifically understand the differences between downstate New York and upstate and the North Country.”

And a small business loan helped DMP Rentals due to the eviction moratorium.

The Phaneufs own 30 units under DMP Rentals. When the pandemic first hit, Kim sent every tenant a letter saying they would get through this together and advising them to let her know about issues that come up with making rent.

She said about 90 percent of the tenants have not had issues paying, while two who had not been paying prior to the pandemic and who she has not been able to evict remain.

During a roundtable with area business owners and management, Tanner announced that Canadian Pacific Rail will be restoring service to Plattsburgh to five days a week.

North Country Chamber of Commerce Garry Douglas said rail was a critical part of connecting the area’s industrial base and manufacturing hub to the rest of the country and the world.

He credited both Stefanik’s advocacy and the Baraby brothers’ vision for development in Plattsburgh for the restoration of full CP Rail service, which had been reduced to as little as two days a week throughout the pandemic.

The Barabys have received full approval from CP Rail as well as preliminary approval from the Town of Plattsburgh to put in a secondary line, Troy said.

“As well as everyone else does, we see the huge opportunity that we have here to not only do good for ourselves but for all businesses in Plattsburgh and offer the best service possible.”

Town of Plattsburgh Senior Planner Trevor Cole said it has been fascinating to watch the site evolve. The Barabys had received Town Planning Board approval to reactivate the rail yard in January 2017, the Press-Republican previously reported.

“This is the type of essential infrastructure that allows … other growth happen,” Cole said.

Are you concerned about the spread of polio?