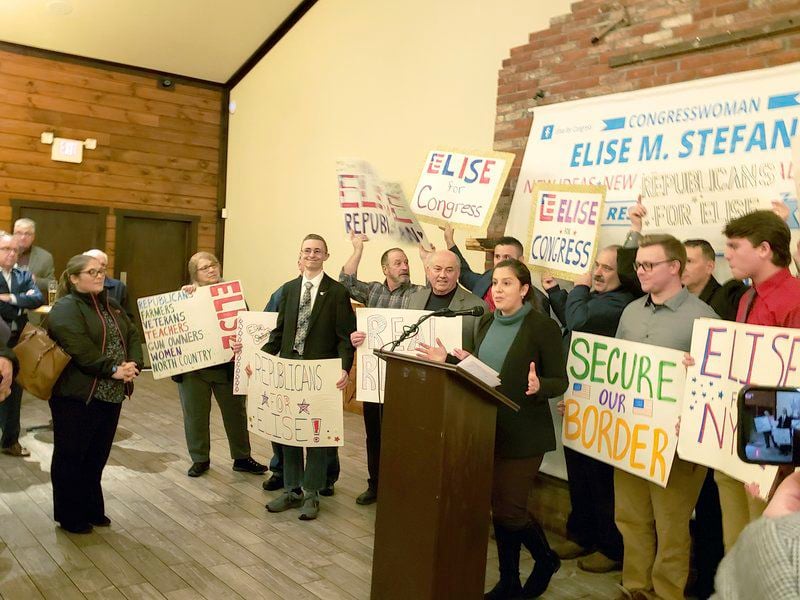 CARA CHAPMAN/STAFF PHOTOCongresswoman Elise Stefanik (R-Schuylerville) addresses supporters during a fundraising event at the Butcher Block in Plattsburgh Monday evening. With at least 120 supporters in attendance, Stefanik said it was her campaign’s biggest Plattsburgh event to date. 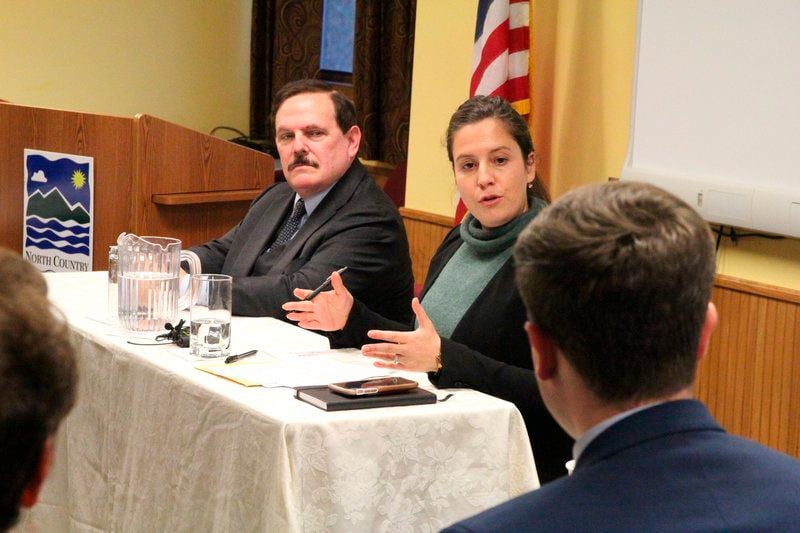 BEN ROWE/STAFF PHOTOCongresswoman Elise Stefanik (R-Schuylerville) speaks with North American Center of Excellence for Transportation Equipment Director Joel Wood at a roundtable discussion Monday at the North Country Chamber of Commerce. Stefanik received an update on a United States Department of Agriculture rural development grant that her office made the chamber aware of. 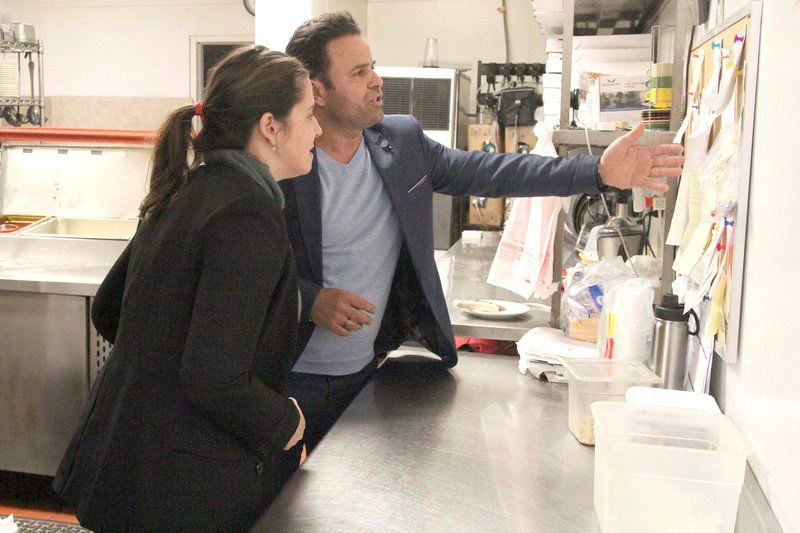 CARA CHAPMAN/STAFF PHOTOCongresswoman Elise Stefanik (R-Schuylerville) addresses supporters during a fundraising event at the Butcher Block in Plattsburgh Monday evening. With at least 120 supporters in attendance, Stefanik said it was her campaign’s biggest Plattsburgh event to date.

BEN ROWE/STAFF PHOTOCongresswoman Elise Stefanik (R-Schuylerville) speaks with North American Center of Excellence for Transportation Equipment Director Joel Wood at a roundtable discussion Monday at the North Country Chamber of Commerce. Stefanik received an update on a United States Department of Agriculture rural development grant that her office made the chamber aware of.

PLATTSBURGH — When Congresswoman Elise Stefanik arrived at Dino's Pizza Monday afternoon, owner Ali Tartoussi greeted her at the entrance with his thanks.

"You guys saved my life," he told her.

Tartoussi's fiancée, Raja Moussa, applied for a fiancée visa, but was denied, prompting him to contact Stefanik's office in September.

A lawyer said Moussa would not be able to come to the U.S. from their native Lebanon unless the two got married.

But when Tartoussi explained the situation to Stefanik's staff, they got right to work to start Moussa's green card process.

"I didn't even dream ... in two months they approved my case," Tartoussi said.

“You made two big families...very happy.”

Tartoussi gave Stefanik a tour of his restaurant, where she shook hands with some regulars, checked out the kitchen and took a look at Tartoussi's garden just outside the kitchen's door.

He said he cried when he received the phone call on Nov. 20 that their case had gone through, and that without assistance from Stefanik's staff, they may have had to wait another two years for Moussa's green card.

Prior to meeting with Tartoussi, Stefanik stopped at the North Country Chamber of Commerce for an update on a United States Department of Agriculture rural development grant that her office helped the chamber obtain.

North American Center of Excellence for Transportation Equipment (NAmTrans) Director Joel Wood — a former Stefanik staffer — explained that the grant application was submitted in March, and the $28,000 in funding was received in July.

The grant funds a program that aims to allow local businesses access to low-cost trainings for employees promoted from within.

While some business owners opted to send one employee to all the ongoing supervisor training sessions, others, like The Northeast Group President/CEO Michael Carpenter, are sending multiple.

“When you look at the curriculum that’s on there, it falls in line with what we’re doing when we’re trying to empower people to get into that management field,” he said.

Others commented on the difficulty of having to train in-house and how the training's location at the chamber made it very convenient.

"The reason why I wanted to get this update is there’s so much national news going on, but the most important thing that any member of Congress can do is to deliver results to their district," Stefanik told them.

Stefanik wrapped up the day with a fundraising event in the Butcher Block's Adirondack Room, where at least 120 supporters greeted her with cheers and, some, with signs.

She said it was her campaign's biggest Plattsburgh event to date.

“We have gotten calls three to one in favor of the past few weeks, so it shows that the people and the voters are on our side,” she said, referring to the impeachment inquiry into President Donald Trump.

She spoke about the high level of interest in the district of late, and received cheers when she said she was going to beat her Democratic opponent, Tedra Cobb, by an even bigger margin than in 2018.

Stefanik described Cobb as her "far-left" opponent who is the "number one pro-impeachment opponent" across the country.

She spoke about Cobb's support of Medicare-for-All, and said she wants to ban guns, would have voted against the Farm Bill and would not vote to pass the United States-Mexico-Canada Agreement (USMCA).

"We cannot wait for 2020," she concluded as she began a round of applause.

Both appreciate her support of small businesses.

"We like how she’s fighting for both our future and those who are older," Phaneuf said.

Both have been paying attention to the impeachment hearings.

"It’s important to pay attention to local politics so you can actually refute the arguments that you might see and disagree with and you can refute it all with sound logic," Decker said.

Clinton County Republican Committee Chairman Clark Currier said he has supported Stefanik since she first ran in 2014 and believes her values are in tune with those of the district's constituents.

He said the "Hollywood liberals" who have been contributing funds to Cobb do not really represent the values of the farmers, construction workers, corrections officers and others that reside in NY-21.

Outside the Butcher Block, Ben Landry held a sign that read, "52 USC 30121" above "STEFANIK ABETS A FELON".

That section of U.S. Code outlines the rules dictating contributions or donations by foreign nationals.

"I think it's just a real shame that she is willing to cover for him," he said, referring to Stefanik.

Landry decided to go to the Butcher Block with his sign to remind people that there is a moral compass and there are rules, which he thinks people believe are okay to break and ignore.

Asked about Stefanik's statements on her stances Tuesday, Cobb said every one of the assertions was a lie.

"This is a classic example of the partisan Washington games that North Country families are tired of,” she said.

“Elise Stefanik cannot defend her record of voting to take health care away from 64,000 northern New Yorkers, to gut protections for people with pre-existing conditions and to cut Medicare and Social Security by hundreds of billions.

"Instead of defending her record she chooses to lie about mine.”

MOOERS [mdash] Charles F. Letson, 88, of Letson Road, passed away May 21, 2020. He was born on March 14, 1932, son of Fred and Irene (Moore) Letson. Charles married the former Linda Reynolds on June 14, 1958. He retired from Pfizer Pharmaceuticals where he worked as the boiler operator for s…