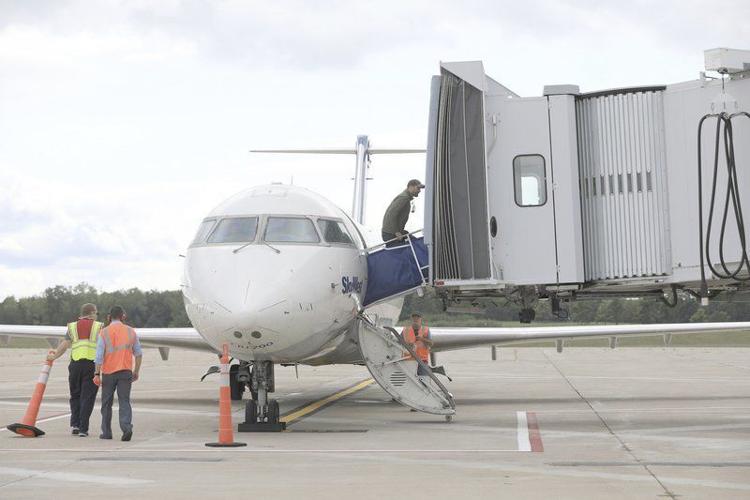 The first passengers to arrive in Plattsburgh via a United Express 50-seat regional jet make their way to the Plattsburgh International Airport terminal in August 2018. SkyWest/United Express has been operating out of the airport since 2018, with 12 weekly round-trip flights on 50-passenger CRJ-200 twinjets to Dulles International Airport in Washington.

The first incoming United Express flight to arrive in Plattsburgh in August 2018 coasts beneath a ceremonial spray of water delivered by Plattsburgh International Airport Fire Department.

The first passengers to arrive in Plattsburgh via a United Express 50-seat regional jet make their way to the Plattsburgh International Airport terminal in August 2018. SkyWest/United Express has been operating out of the airport since 2018, with 12 weekly round-trip flights on 50-passenger CRJ-200 twinjets to Dulles International Airport in Washington.

The first incoming United Express flight to arrive in Plattsburgh in August 2018 coasts beneath a ceremonial spray of water delivered by Plattsburgh International Airport Fire Department.

PLATTSBURGH — Clinton County officials have learned that SkyWest/United Express, the airline that provides daily service to Washington, D.C. from Plattsburgh International Airport, will be leaving.

“They didn’t want to leave because they were doing very well here, but they just don’t have the staff, so they are pulling out of the Northeast,” County Legislator Bobby Hall (D-Area 10, City of Plattsburgh) who chairs the county’s Airport Committee, said.

SkyWest has been operating out of the airport since 2018, with 12 weekly round-trip flights on 50-passenger CRJ-200 twinjets to Dulles International Airport in Washington.

They won the bid to provide the service through the federal Essential Air Service Program, which pays airlines to serve areas with smaller populations.

The latest two-year contract, which began in the summer of 2020, was for $6.7 million in EAS funding.

Hall said SkyWest gave the county a 90-day notice that they will be leaving. The EAS contract with SkyWest is up July 1, but if there is no other airline ready to step in, they must stay until one is found.

“SkyWest did really well here. Our local businesspeople and the public used that flight to Washington a lot.” he said.

“But they just don’t have the staff, COVID has been hurting everything.”

Airport Director Chris Kreig said about 89,000 people have used SkyWest for travel into and out of Plattsburgh during the airline’s time here.

Numbers remained strong despite the airport being closed for two months from April to June of last year due to rehabilitation of the runway, Kreig said.

In a statement, SkyWest said COVID was the culprit.

“SkyWest continues navigating staffing challenges generated by a surge in COVID cases. As a result of these challenges, we expect to discontinue United Express service at Plattsburgh this spring,” The statement said.

“We are working to minimize the impact to customers and our people. SkyWest ground staff at Plattsburgh will be offered various options, including transfer opportunities within the company.”

SkyWest is also pulling out as the EAS provider at Ogdensburg International Airport in St. Lawrence County.

Hall said he is hopeful that another airline will be interested in the market. Bids for a new EAS contract are due at the end of the month.

He said Boston and Philadelphia could be in the mix as destinations as well as Washington, but it is unlikely that New York City will be a contender.

“I haven’t heard New York mentioned yet,” he said.

County Legislature Chairman Mark Henry (R-Area 3, Chazy) said the news of SkyWest leaving was disappointing, but he was hopeful for the future of the airport.

“Obviously, we are hopeful we can get another carrier in here and we are already working on it,” Henry said.

“We have a great airport, a great product and a lot to offer, and this could wind up being a great opportunity with somebody else.”

“United Express service at Plattsburgh has been strong even during the pandemic, and we had recently been assisting them with plans for a new marketing campaign,” Douglas said.

“It seems we are caught in a strategic withdrawal from the east by SkyWest, but hopefully the demonstrated strength of demand here will help to lure another carrier while United service will continue until then.”

Douglas said air service at Plattsburgh has become especially important to the regional business community, and the Chamber has offered its support to the county as they work with the federal government to attract new interest.

“Indeed, the Chamber has already connected the county with Sen. (Charles) Schumer who contacted me, and we know he and our other Washington friends will also be engaging.”

“I believe the business Sky West proved that could be done here in Plattsburgh before the pandemic with business and tourism opportunities, along with the eventual reopening of the border will result in another airline coming in.

“I stand ready to work with local officials moving forward to highlight the great opportunity that airlines have in flying in and out of Plattsburgh.”

Kreig said the COVID-19 pandemic has created unprecedented challenges for the airline industry.

“We appreciate the partnership with SkyWest, their service to the community and look forward to future opportunities to work together should they present themselves,” Kreig said.

The essential air service contract for Plattsburgh was up for renewal prior to SkyWest’s decision to leave, and a request for proposals to provide the service was issued in December by the U.S. Department of Transportation, Kreig said.

“Proposals from interested airlines are due to DOT by Jan. 27, at which time the public will be invited to comment on any proposals submitted as part of the selection process,” Kreig said.

Sky West officials said the day of the final flight from Plattsburgh was still being finalized. Once that has been determined, customers will be contacted so they can be re-accommodated.

Do you vote in midterm elections?