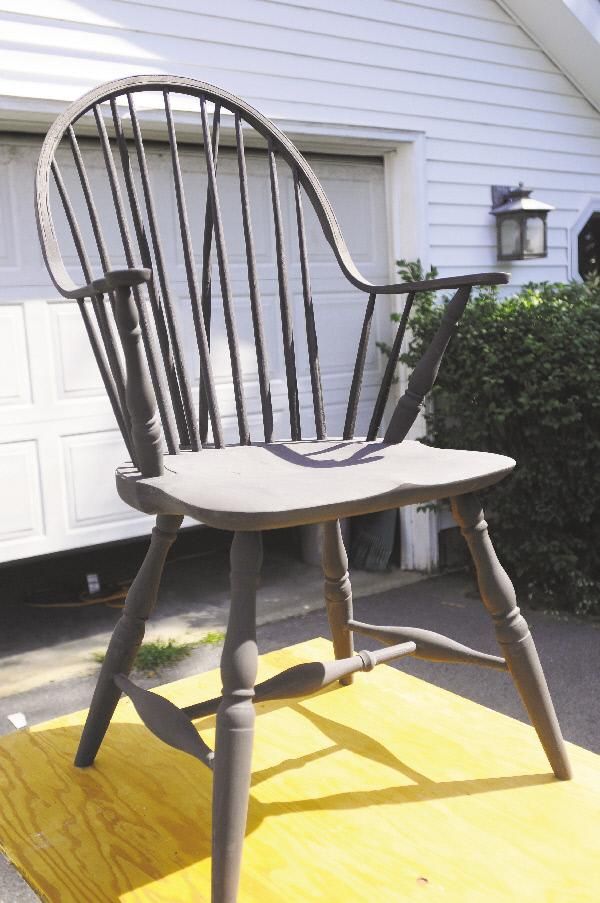 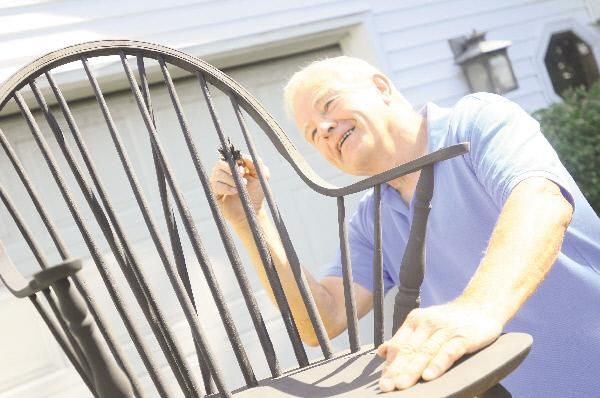 Clarke Herdic, a retired health-education professor at Clinton Community College, has been making Windsor chairs for about five years.

"I get a tremendous amount of relaxation and pleasure just making the parts and putting them together. It's a great hobby. And, occasionally, if you mess up a piece, just put it in the wood stove and try another one.

"It makes great kindling," he said with a laugh.

The chairs are known for their distinctive curved backs with several thin wooden spindles set side by side.

Herdic entered three of his Windsor chairs in the fine-arts category at the Clinton County Fair in July. One got both a blue ribbon and best in show, and the two others each came in second place.

"I just wanted to get some type of recognition for Windsor chairs in the area and hopefully stimulate some interest in other people."

And, he said, "I'm looking for somebody who wants to share happy and sad stories making Windsors."

"The original (curved continuous-back Windsor) was built in about 1790. It's one in a series of Windsors that evolved. If you go back, the heyday of Windsor furniture in the United States probably started around 1730. Somebody took a piece a furniture that probably came out of Windsor, England. ... And they took that, and I think like any other design of any object like, take cars when they first came out, each year there is a change."

When Herdic visited George Washington's house in Mount Vernon, Va., he saw a whole row of Windsor chairs on the side porch.

"But you could quickly see that they were not from his (Washington's) era."

However, the privately owned museum next to Washington's house had an authentic old Windsor chair, Herdic said.

Herdic's technique has changed and improved over time. He has made a total of 10 chairs, and he has two more in the works, he said.

"Now that I've done it a few times, I could probably make a complete chair in about 30, 35 hours."

His love of Windsor chairs and handcrafted wood "sculptures" began more than 30 years ago.

"I picked up a book on Windsors probably back in the late '70s," he said. "I read the book, and I became enthralled with the two different chairs that I saw in there. Years later, I found out (the author) actually has a school where you can go for a full week, and you come home with a chair that you've made. I've been there twice."

The school, which is in Hampton, N.H., offers five-day classes two to three times a month.

"It's like going off to camp," Herdic said, smiling.

The process for making a Windsor chair has many steps.

Herdic said much of the furniture that's mass produced today will not last as long as handcrafted furniture because it is not made the same way, with careful attention to making things fit correctly and securely.

"They look very nice, however, they're not put together the same way. They'll drill a hole, slap some glue in, slap the piece in and maybe stick a nail in there. ... Anything that's made out of wood is subject to season movements, cracks. So as wood expands and contracts, it loosens those joints. If these joints loosen (in a Windsor), they're locked in there with the wedges.

"They're not going to fall apart."

The Windsor chairs that Herdic makes would typically sell online for about $750, he said. But they will last for many generations.

They don't seem to be as popular as they used to be, Herdic said, mostly because of their high cost, due to the many hours of labor that each piece requires from the craftsman.

"If you talk to antique dealers today, they'll tell you their business has really dropped off because the younger generation wants to buy stuff that looks pretty, and it's quick, and it's clean, and they can use it."

But Herdic's children appreciate his Windsors. He flew a chair out in pieces in a suitcase to his son's house in Boulder, Colo., and spent three days assembling it.

"He likes sitting in it and drinking a glass of wine."