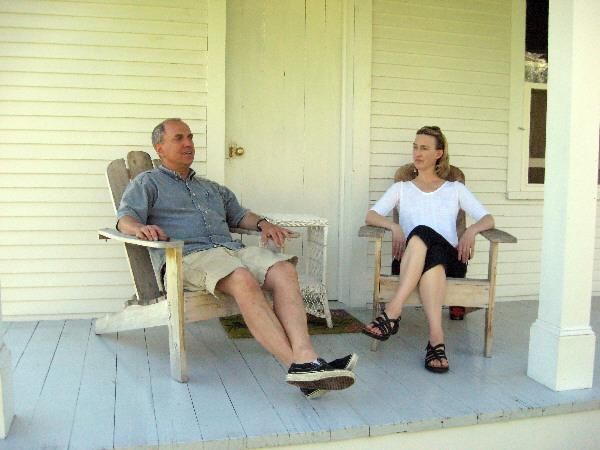 Jeb and Peggy Hart enjoy their porch and the view. 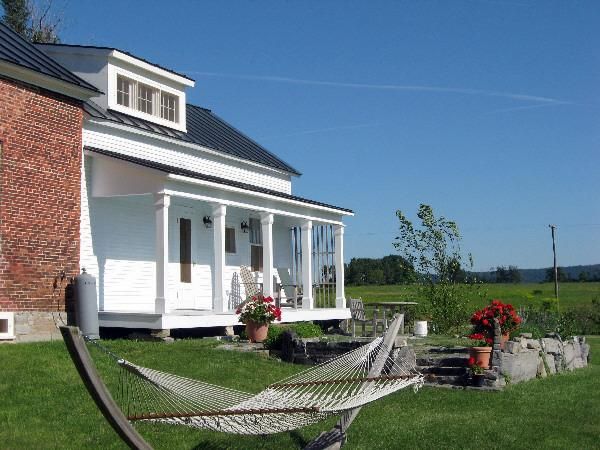 Landscaping adds to the charm of the Tenant Farm in Essex, pictured after its restoration. 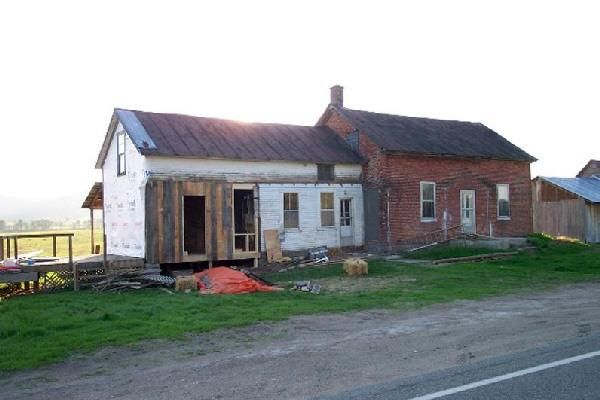 A massive cleanup was needed to begin work on the Tenant Farm buildings.

Jeb and Peggy Hart enjoy their porch and the view.

Landscaping adds to the charm of the Tenant Farm in Essex, pictured after its restoration.

A massive cleanup was needed to begin work on the Tenant Farm buildings.

For years, the house was scarcely visible. Untamed brush and grasses and scattered remnants of rusting farm tools, once-functional household furnishings, broken toys and an above-ground swimming pool nearly hid this cluster of the remains of a small 19th-century farm.

The locals referred to it as the Tenant Farm. Today, completely restored and enhanced by carefully designed landscaping, it bears the same name. To the west across a sweep of grassy fields, Adirondack peaks rise from the horizon.

"The views from this old tenant farmhouse are fantastic," said Jeb Hart, who bought the property as a renovation project and weekend getaway with his wife, Peggy. "The road that we are on has very little traffic except for the beginning and end of the day."

They embarked on their odyssey three years ago.

"You get deeper and deeper as you do things," Jeb said. ...We began by cleaning up all the stuff left around outside. Next we turned to our neighbor Lauren Murphy, well versed in restoration in this area, for advice on craftsmen to tackle the specific problems inside.

"We dealt with poor drainage in the basement, installed new wiring and plumbing, replaced various supporting beams and the kitchen area. We had a master builder from the area design and build a period fireplace."

The Tenant Farm, built about 1850, was once owned by and served a much larger brick farmhouse built across the road in 1828. Farm tenancy is an agricultural production system with varying meanings depending upon the locale, time period and arrangements made between a landlord or landowner and a tenant. The tenant farmer works the land and may or may not be paid for his labor in part or he may make payments to the landlord. A contract made between landowner and tenant determines the arrangement and terms of the tenancy.

The Harts had known about Essex and its historic architecture for a number of years. Weekdays, they live in Brooklyn in a house they've restored. Jeb had decided he'd like to do something similar in the Adirondacks.

"My wife is very supportive of my whims."

Jeb, 56, has restored seven houses. His love affair with restoration began when he was 20 years old. His first project was a house next to his own.

"When I finish a house, I always say I'm not going to do it again."

But he returns to a childhood interest "in old things and helping to rescue buildings that need help. It gives me a good feeling."

His passionate interest in restoration work is sustained by an entire host of rationales.

"I have a sense of restoring America. I'm counteracting the phenomenon that exists in this country. We're losing our Main Street. We haven't saved much. The very fabric of all these towns in upstate New York is going. We are losing our farms. Yet there are some areas where an agriculturally based community can come back.

"When I arrived in Essex, something clicked."

As Jeb's project continued, he reviewed the conditions of the two small barns on the property.

"The house was the main resource here. But the barns needed total restoration as well. The small barn, we had moved several-hundred feet to open up the view to the mountains beyond the fields. The larger one is now used for a one-car garage, wood storage and an open stone-paved area with a wood stove to serve as an additional space for writing, thinking and relaxing outside the main house."

"(But) I've done restoration work which has yielded a lot of money," Jeb said. "Those are ones that have given me the payback to take on others that do not. The Tenant House is one of those. In general, you can figure that a residential restoration will cost about $300 a square foot."

The Harts recruited a local master gardener and landscaper to address the grounds.

"As we are close to the road, she put in a variety of plants and shrubs to give us privacy," he said. "She also guided us in putting in a stone-paved rear deck and a small orchard."

Restoration is a part-time career for Jeb; weekdays, he works in the music industry.

"Now that we are about finished, we're really enjoying the house," he said. "I believe we've have also helped local business and craftsmen. And we have become patrons of an expanding local bakery, The Dogwood Company, in Wadhams. I go there to recharge my emotional batteries.

"Everything is right in some of these projects in this area, and that's rare."