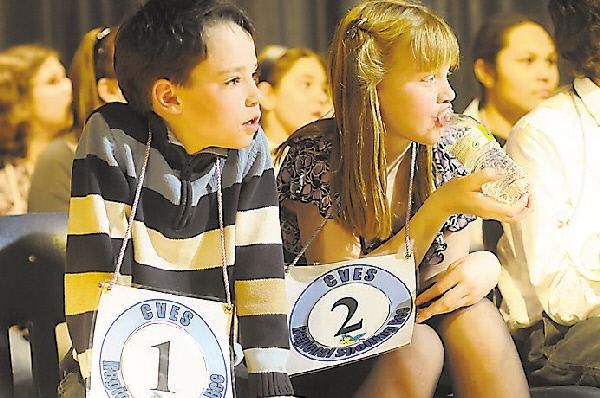 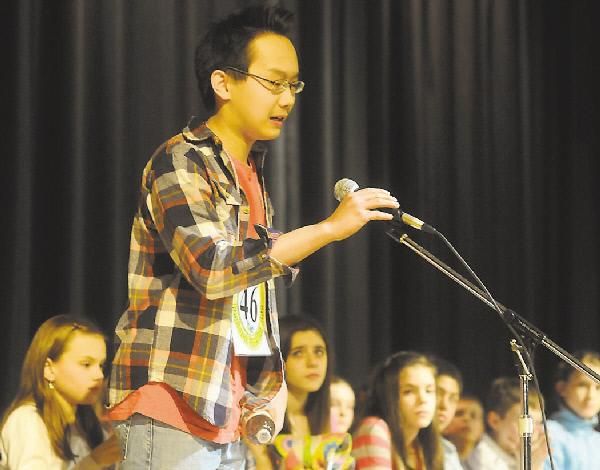 H-I-S-T-O-R-Y repeats itself as 2009's Regional Spelling Bee winner, Leo Lee, wins a second time. The Seton Catholic eighth-grader defeated defending champion Alyssa Szczypien in the 26th round. Bonus photos from this event will be available at www.pressrepublican.com.

H-I-S-T-O-R-Y repeats itself as 2009's Regional Spelling Bee winner, Leo Lee, wins a second time. The Seton Catholic eighth-grader defeated defending champion Alyssa Szczypien in the 26th round. Bonus photos from this event will be available at www.pressrepublican.com.

It was an evening of academic fun Friday as nearly 70 area students competed for a place in the ESPN-televised Scripps National Spelling Bee.

With adrenaline pumping and brains working at full throttle, students from 30 local elementary and middle schools tested their spelling skills during the 10th-annual Regional Spelling Bee.

While many were visibly nervous before they took the stage, not all seemed intimidated by the judges, questions or packed audience.

"I think it's cool. It'll be fun," Harley Disco, a sixth-grader at Northeastern Clinton Central School, said nonchalantly as he geared up for the first round of oral questions.

While it was her second year vying for a place in the national competition in Washington, D.C., that takes place in late May, Saranac seventh-grader Christina Fray still battled nerves before she took the stage with the other 66 students in grades four through eight.

Like many others, she had been busy practicing for the big event but said she was "still a little nervous" about the bee, which was sponsored by the Champlain Valley Educational Services Regional Spelling Bee, Press-Republican and North Country Parents for a National Spelling Bee group.

The event brought out many first-time spelling enthusiasts, but also several past regional winners, including 2010 champion Alyssa Szczypien from Peru Central and 2009 top finalist Leo Lee of Seton Catholic.

Each of the students earned a spot in the regional competition after winning similar events at their schools.

The highly anticipated event wasn't just popular among students, but teachers, administrators and parents as well.

"I really enjoy it, and it's always fun to watch," said Plattsburgh resident Jennifer Loop, who competed in the spelling bees as a child and turned out Friday to support her daughter, Erika Caron.

Erika was an alternate for Plattsburgh City School District.

While Harley Disco wasn't nervous before he took the stage, his mom, Kelly, was.

After two oral rounds and a written exam, the crowd on stage slowly dwindled to a select few.

Finally, in the 26th round, the competition boiled down to the two most recent regional winners — Alyssa Szczypien and Leo Lee.

A funeral service for Jonathon Harrica will be held at St. Josephs Catholic Church in Dannemora, N.Y., on Wednesday, May 19, 2021, at 1 p.m. You may share a photo, story, or condolence with the family by visiting www.hardenpauli.com

75, of Plattsburgh, passed away May 10, 2021 at Albany Medical Center. He was born in Plattsburgh on November 11, 1945. There are no calling hours or services. Arrangements are entrusted to the Brown Funeral Home in Plattsburgh.