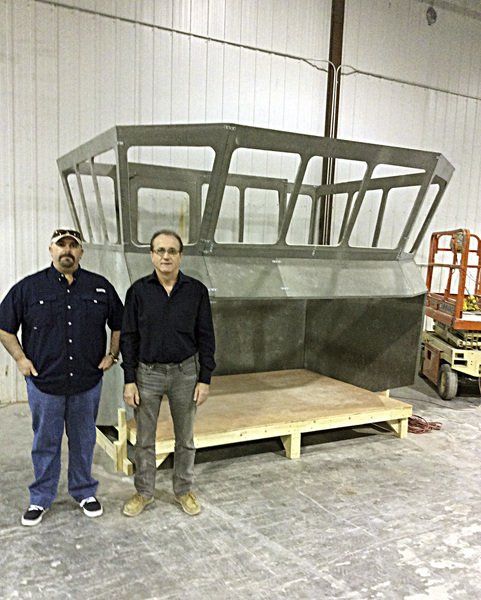 DAN HEATH/Staff PhotoPro Cat Manager Stephen Patrick (left) and Vice President Michel Pachiaudo stand in front of the skeleton for the workboat cabin prototype inside their building in Rouses Point. They hope their business can be the start of a local boat-building hub. 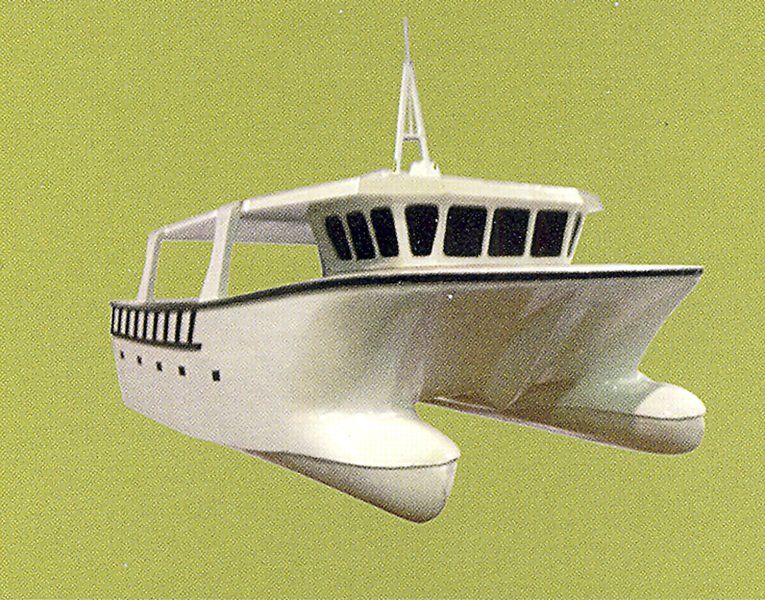 PHOTO PROVIDEDThis model shows what the prototype for the Pro Cat fiberglass catamaran workboat would look like once complete.

DAN HEATH/Staff PhotoPro Cat Manager Stephen Patrick (left) and Vice President Michel Pachiaudo stand in front of the skeleton for the workboat cabin prototype inside their building in Rouses Point. They hope their business can be the start of a local boat-building hub.

PHOTO PROVIDEDThis model shows what the prototype for the Pro Cat fiberglass catamaran workboat would look like once complete.

ROUSES POINT — A prototype is taking shape in Rouses Point that company officials hope will be the launch of a boat-building hub in the North Country.

Pro Cat US, located at 5 Lincoln Drive, started operations in 2015, founded by Magguy Thibodeau. She serves as president, and Michel Pachiaudo is vice president.

The white hull of the fiberglass catamaran workboat is under construction at the site in Rouses Point.

Based on models used in Europe, it will be the first and only boat of its type and material to be constructed in the United States, Pachiaudo said.

Local manufacture will be crucial for its proposed commercial applications, such as deep-sea fishing and lobstering, as the Jones Act requires commercially used, federally registered vessels to be built in the United States.

"We have a market; we have a niche," he said. "We have a product that has been proven in England."

The boat is 32 feet long and almost 16 feet wide, with a cabin area up front and extensive flat work space throughout the rest of the deck.

The catamaran design makes it very stable and adaptable to a multitude of uses, Pachiaudo said.

The all-fiberglass construction will eliminate issues associated with traditional wood core or aluminum core models, which eventually rot from exposure to the elements.

"I am a former fishing-fleet owner," Pachiaudo said. "I know the issues fishing boats present."

Rouses Point provides an ideal location to launch the venture, he said.

Through Lake Champlain, they have access to points along the East Coast via the Hudson River and to maritime Canada via the Richelieu and St. Lawrence Rivers.

That reduces the expense and hassles of transporting the vessels over the highway.

"Our intent is that other builders will come here and build a hub here," Pachiaudo said. "That is my dream."

They have attended trade shows during the last year and have already received 35 letters of intent linked to successful completion of sea tests.

"People were very interested in this boat," he said.

The Pro Cat is a multi-purpose working platform on the water. It provides 327 square feet on the deck, almost two times the surface area of a similar monohull craft.

The company has calculated that the boat has the equivalent load capacity of a 42-foot lobster boat.

It can be powered with inboard or outboard motors. The hull weight with two engines is about 12,000 pounds, around 20,000 pounds if fully loaded.

Pachiaudo said a conservative estimate is a top speed of 37.8 knots with two 300-horsepower engines. That is desirable for commercial fisherman, who can get higher prices for their catch if they are first back to the docks.

Not everyone will need all of that speed, he said, so they can go with less power but greater fuel efficiency.

Five watertight compartments hug each side of the hull to provide exceptional buoyancy in the event of a breach. Those compartments can also be used as holding areas, to reduce on deck storage.

Patrick said the boat has a shallow 18-inch draft at full load, so it can be used in low waters. That is an especially desirable feature in places with large tidal fluctuations, such as the maritime provinces in Canada.

The design allows for a multitude of uses. Patrick said they are even talking about marketing for aid missions in third-world countries, as the shallow draft and ability to beach the craft would make it ideal for delivering supplies along rivers.

The deck area could be converted to house floating medical offices or research laboratories.

The craft could be used as a buoy tender, as it could maneuver right next to markers in shallow navigation markers, and a crane on deck could then hoist the buoy aboard.

The stern can be modified to include a hinged platform for divers or unloading of supplies and equipment.

"There are pretty much endless applications," Patrick said.

Pro Cat US is leasing 23,000 square feet of space at present, manufacturing the prototype through a hand-lamination process.

If orders take off as expected, they plan to install an assembly line for automated molding of components, followed by assembly and surface finishing.

Pro Cat US has seven employees now. Pachiaudo said that could increase to about 47 once the assembly line is in operation.

One issue has been finding employees with boat-building experience. Pachiaudo would like to eventually see some sort of training program that targets their industry, once there is an employer base in place.

They have had success with employees who previously worked on much smaller components for companies such as Nova Bus, Patrick said, though it still takes time to bring them up to speed for work on pieces as large as the prototype at Pro Cat.

The goal would be to produce one boat a week to start, he said.

They hope to have the prototype ready for summer, Pachiaudo said. That would be followed by on-the-water testing on Lake Champlain.

Potential customers who want to conduct sea trials so will go through the Hudson River to the Atlantic Ocean and up to New England for about a month, then on to New Brunswick and Newfoundland in Canada

Pachiaudo said they see an opportunity to export to Canada, where much of the fishing fleet is aging but significant backlogs exist for new-boat construction.

"That's a huge opportunity for exporting," he said.

Once testing is complete and orders are in place, they plan to invest in equipment for the automated assembly line.

"To be able to produce 50 boats per year, we have to be automated," Pachiaudo said.

Pro Cat US received assistance from Saranac Lake-based Point Positive as they launched the operation.

"I recommend everyone coming to do business here to work with them," Pro Cat Vice President Michel Pachiaudo said. "They are very professional."

For more information and to see a video about the Pro Cat multipurpose workboat catamaran, visit the Pro Cat page on Facebook.

Dan Heath grew up in Rouses Point and graduated from N.C.C.S. in 1978. He received a history degree from the University of Colorado and a journalism degree from SUNY Plattsburgh. Dan lives on Point au Fer in the Town of Champlain.