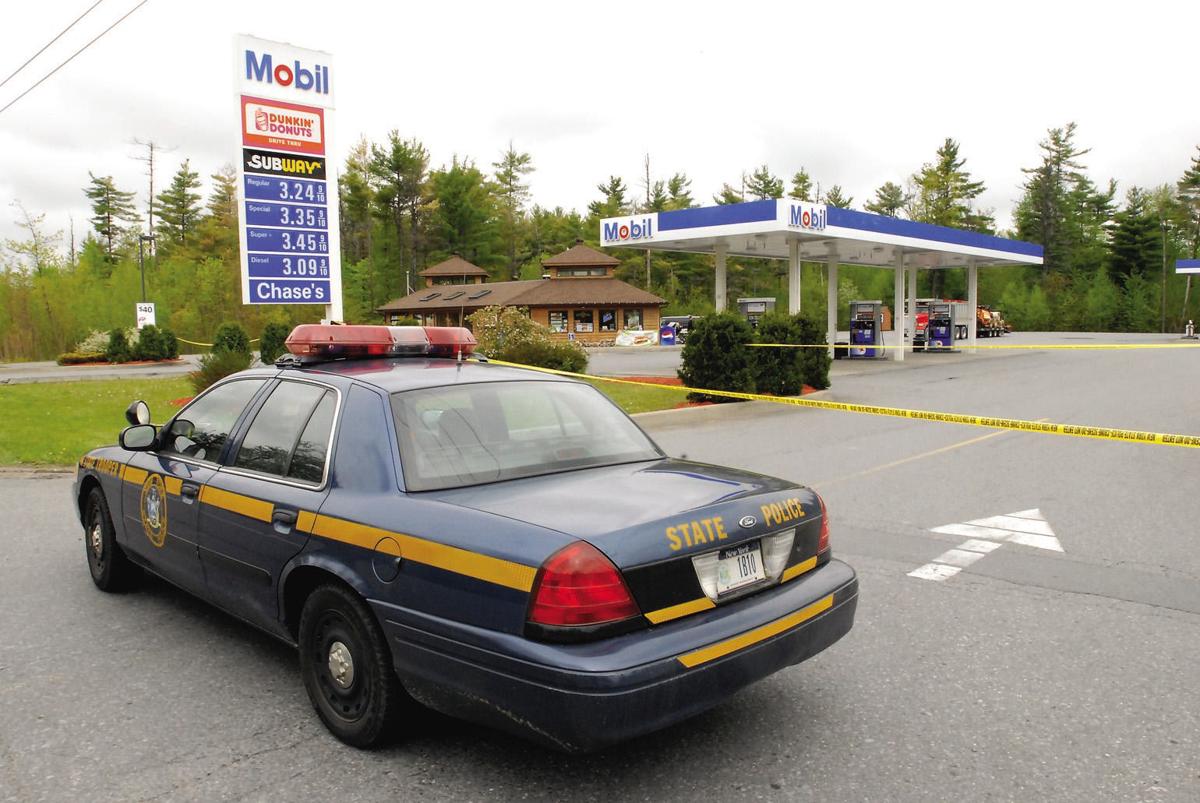 A New York State Police squad sits in front of Chase-s Mobil Convenience Store in Peru after Friday's robbery. Matthew Hammond was taken into custody and charged with robbery and criminal possession of a weapon. 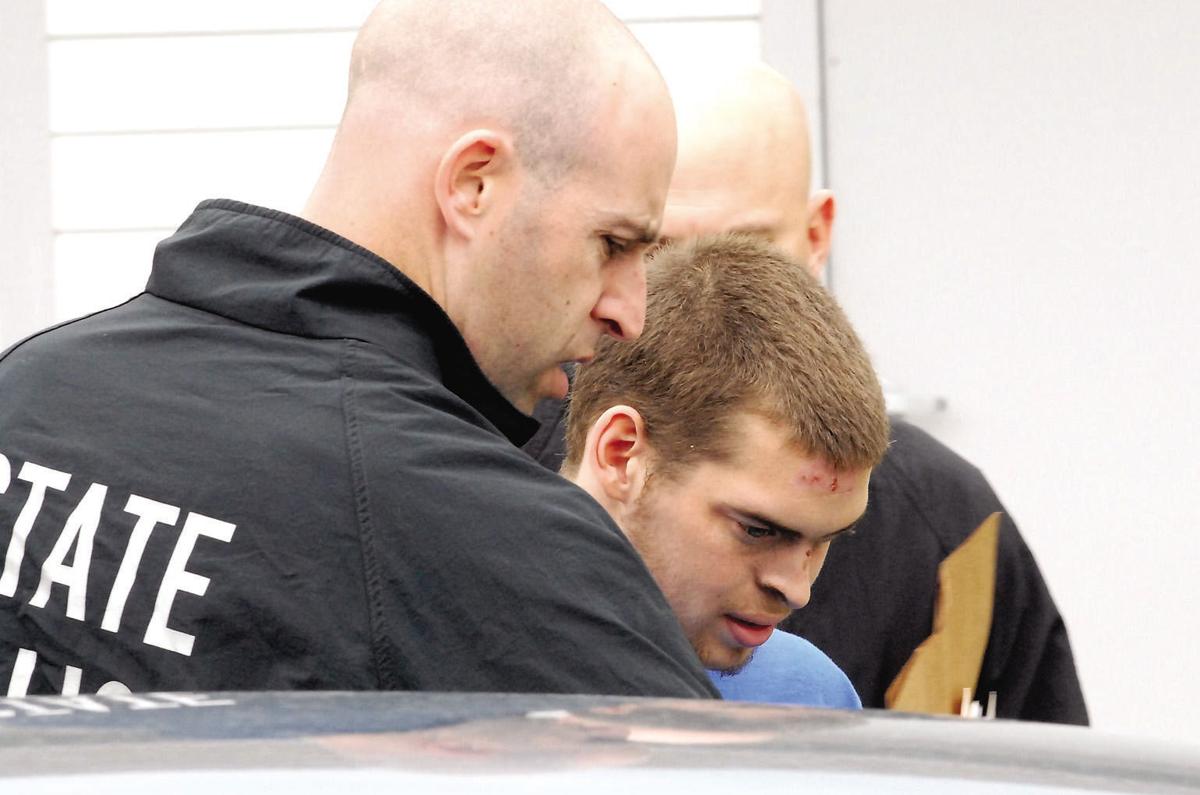 Matthew Hammond of Peru is led out of the New York State Police barracks in Plattsburgh by officers Friday on their way to the Peru Town Hall. Hammond was taken into custody and charged with robbery and criminal possession of a weapon

A New York State Police squad sits in front of Chase-s Mobil Convenience Store in Peru after Friday's robbery. Matthew Hammond was taken into custody and charged with robbery and criminal possession of a weapon.

Matthew Hammond of Peru is led out of the New York State Police barracks in Plattsburgh by officers Friday on their way to the Peru Town Hall. Hammond was taken into custody and charged with robbery and criminal possession of a weapon

PERU -- Early Friday, Matthew Hammond allegedly strolled into a Bear Swamp Road convenience store and pulled out a gun, demanding money from the startled cashier. "He lingered in the store for a few minutes, waiting for (the cashier) to come back up front," said Chase's Mobile Manager Dorothy Thompson. "He asked for four cartons of cigarettes, and when she asked for ID, he pulled out the gun." Thompson was awakened by a frantic call from her employee around 3:30 a.m. after the man fled the store. "She was really shook up, but she was fine." Despite several visible surveillance cameras stationed throughout the store, Hammond, who is 20, did not attempt to conceal his appearance until he was leaving the store, which was empty of customers at the time, Thompson said. "He put his hood up as he was leaving, but he had already walked through the store and stood in front of the cameras," she said, adding that she recognized Hammond as a past customer in the usually busy store. "He apparently had no fear about getting caught. He had no couth about himself." A few minutes later, Press-Republican driver Jared Monette was on his delivery route when he saw "a suspicious looking" man walking out of the thick wooded area behind the nearby McDonald's store. "He just looked out of place. I watched him for a good couple of minutes. He pulled his hoodie over his head like he was trying to hide," said Monette, who had just left the Mobil station where the clerk "was scared and white as a ghost" as she told police she had just been held up. Knowing police were fanning out in search of a man wearing baggy blue jeans, he stopped when he saw police nearby and told them about his unusual sighting. "I figured he had to be the guy they were looking for," added Monette. Before Monette spotted him, Hammond had allegedly tossed the realistic-looking BB handgun into a nearby swampy marsh, which several State Police officials searched Friday morning. They eventually recovered the CO2 weapon. Thompson said Hammond allegedly bragged about the early morning armed robbery to other tenants in the apartment building at which he had been temporarily staying, down the road from the Mobil station. A within a few hours of the robbery, he was taken into custody. "I'm just glad that they caught him," said Monette. He was arraigned on charges of second-degree robbery and third-degree criminal possession of a weapon in Peru Town Court before Justice Jack Lawliss Friday morning. As he was escorted to an unmarked police car after his arraignment, Hammond said he "did not know why" he robbed the store and that after he was ordered to jail, he wished he "hadn't done it." Hammond was transported to the Clinton County Jail on $20,000 cash bail, which he had not posted as of Friday. State Police Capt. Robert LaFountain said Hammond walked away from the early morning robbery with a couple of hundred dollars, some of which was later recovered. Yellow caution tape and police cars circled the store for most of the morning as officials investigated the robbery and searched for the small black gun in the murky waters nearby. The store was reopened to customers after Hammond was arraigned. "I was totally dumbfounded when I heard," said owner Andy Chase, who had opened the plaza ­­-- which includes the Mobil station and store, Dunkin' Donuts and Subway -- in the late 1990s. "I just wanted to make sure that everyone was OK. I never expected anything like this to happen." avanvalkenburg@pressrepublican.com

HOMER [mdash] Nicholas Henry Lines, 18, of Homer, passed away Feb. 18, 2021. Nicholas, "Nick" Lines was a loving son, brother, grandson, nephew and friend to all who knew him. He was loved beyond measure by all. His sparkling blue eyes won everyone over because they resonated the beautiful s…