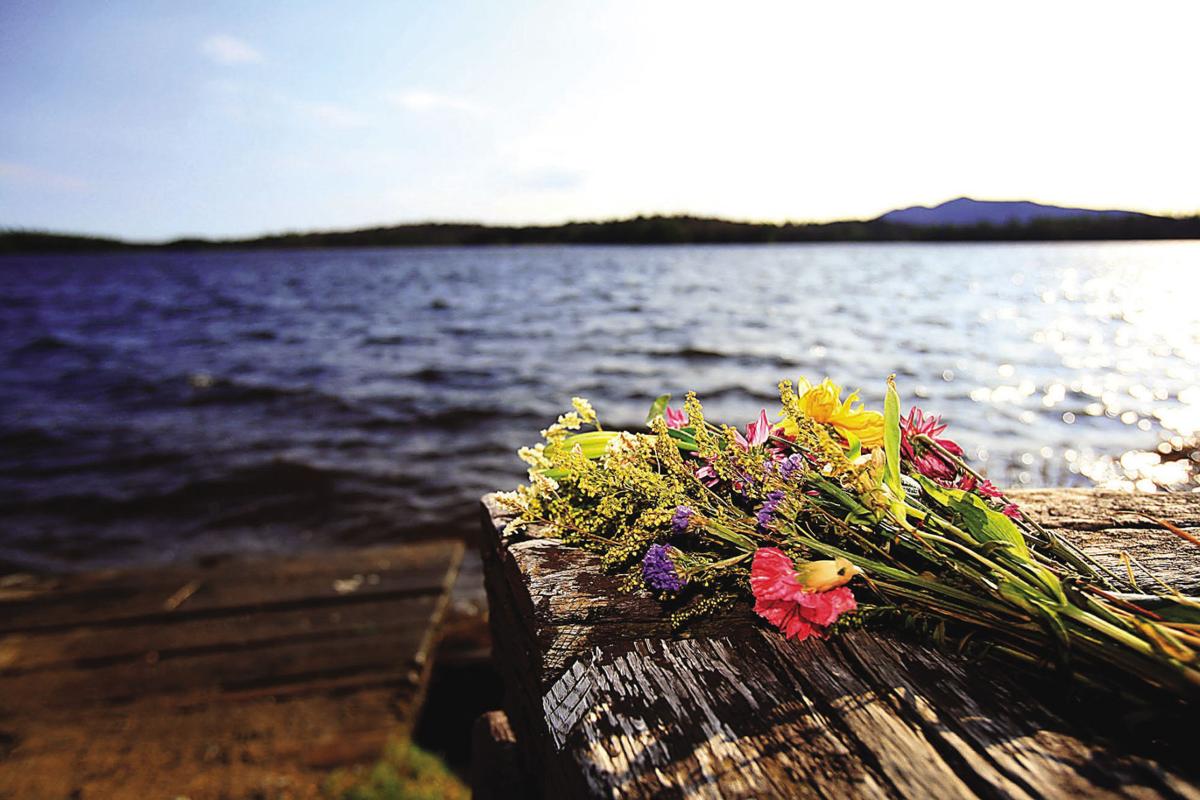 A bouquet of flowers rests on the shores of Lower St. Regis Lake at the Paul Smith College campus in remembrance of Sean Cornell and Lee Walker 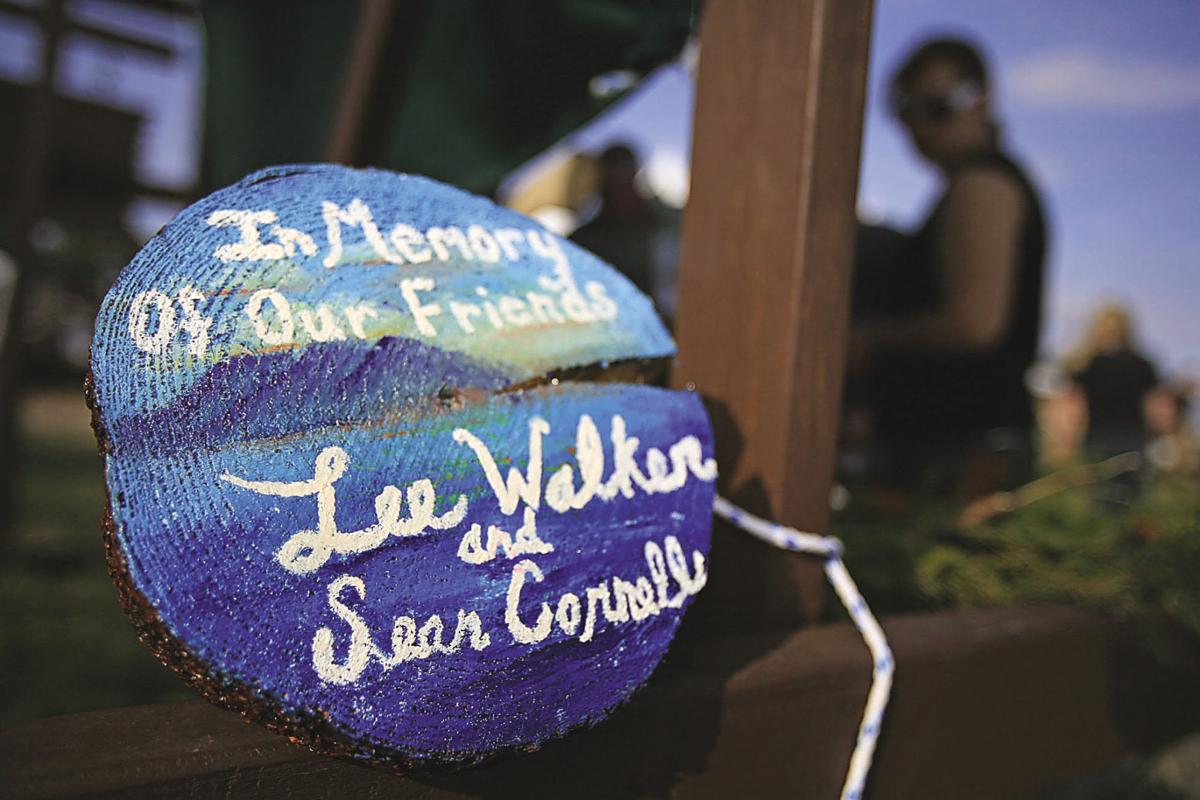 A hand-painted scene is part of the memorial service Tuesday on the shores of Lower St. Regis Lake at Paul Smith-s College for Sean Cornell and Lee Walker, the two Paul Smith-s students who drowned in a boating accident May 4 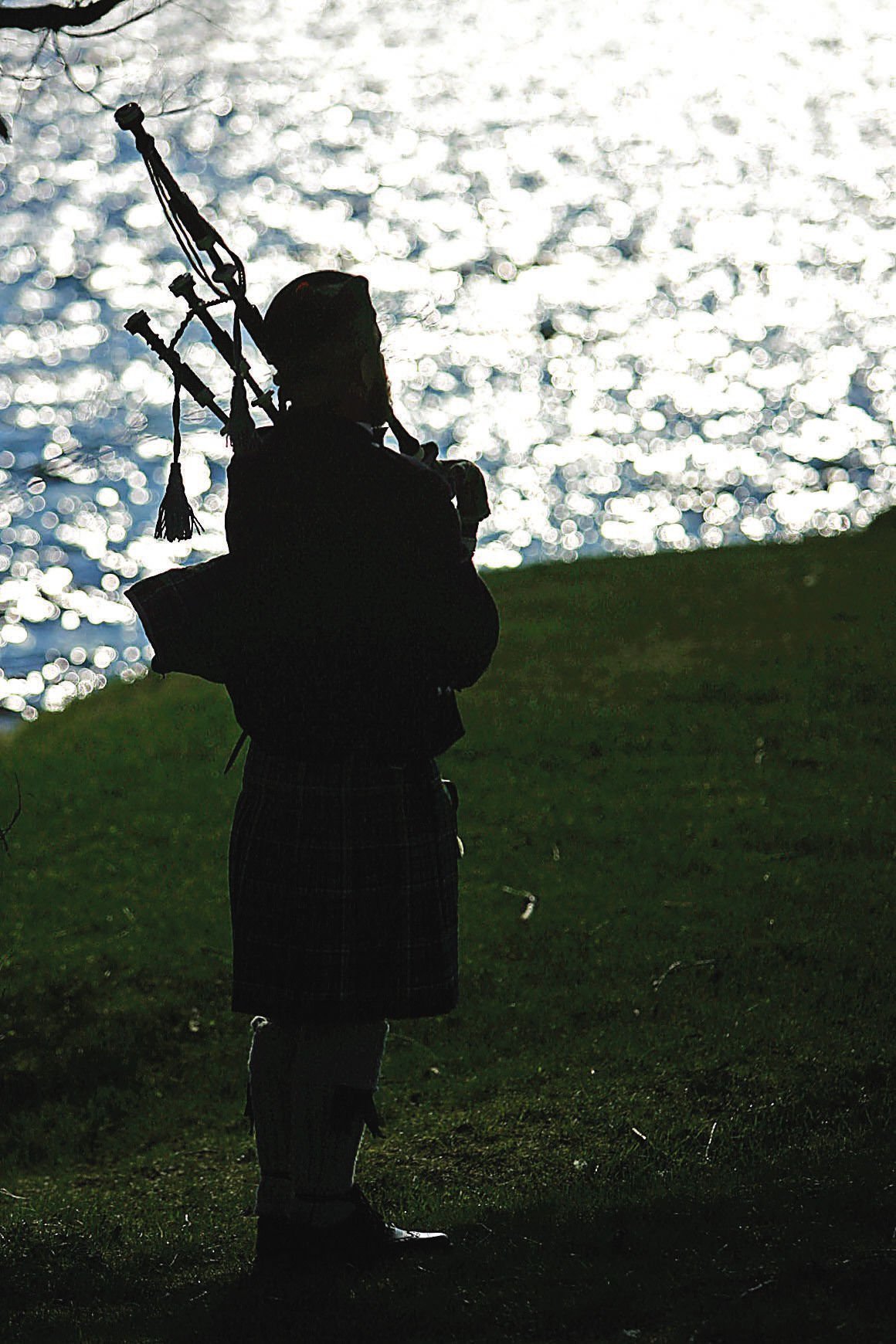 A lone bagpiper plays during a memorial service on the shores of Lower St. Regis Lake

A bouquet of flowers rests on the shores of Lower St. Regis Lake at the Paul Smith College campus in remembrance of Sean Cornell and Lee Walker

A hand-painted scene is part of the memorial service Tuesday on the shores of Lower St. Regis Lake at Paul Smith-s College for Sean Cornell and Lee Walker, the two Paul Smith-s students who drowned in a boating accident May 4

A lone bagpiper plays during a memorial service on the shores of Lower St. Regis Lake

PAUL SMITHS -- Strains from a lone bagpipe were broken by a warm breeze that tossed whitecaps Tuesday on Lower St. Regis Lake. It set a somber tone as students and staff at Paul Smith's College remembered Sean W. Cornell, 20, of Manchester Center, Vt. and Lee Walker, 18, of Enosburg Falls, Vt. who drowned Friday night in a canoeing accident. A makeshift memorial sheltered by a canoe near the boat launch shared mementos of both young men -- two sets of loggers' climbing harnesses, a woodsmen's trophy, a Stihl chainsaw banner, an axe and a Woodmen's team T-shirt. "We are here to share our loss and celebrate their lives," said Cheryl Culotta, college counselor and director of student development, introducing the late-afternoon speakers. Parents of both young men were unable to attend the ceremony, she said. "But when they were here, they looked at the lake over and over again and said how beautiful it was." Student Government President Matt Hildebrandt, also assistant hall director at Clinton Residence Hall where both students lived on campus, called the young men "up front guys who would do anything for anybody". "Remember them as really good guys," he told the crowd of about 100 gathered beside the water. "Those who are dead are never gone," he read from a Lakota prayer. "They are in the tree that rustles, they are in the wood that groans, they are in the water that sleeps." College President John Mills said Paul Smith's College "will never forget these two young men." A fitting tribute will be to learn from this mistake, he said, so it cannot happen again. Mills characterized the two students as "mature, inquisitive and respectful." Sean will receive a degree at Sunday's graduation ceremony on a stage decorated with flowers he grew last semester, Mills said. A second-year student, the 20-year-old was two credits from receiving an associate degree and had planned to stay for a bachelor's degree, said spokesman Ken Aaron. Lee, a freshman, completed his first year of coursework last Friday. Some of the trees Sean cultivated in class were sent to family in Vermont, Mills said. Another was planted in front of Clinton Hall in memory of the young men. Despite the balmy 80-degree spring day and bright sunlight, many students huddled together on the rough-hewn wooden benches listening to the heartfelt tributes. Many cried, some bowed their heads, others removed caps as prayers were spoken. Students were invited to talk during the memorial; some professors read letters sent from students who left the campus. In one letter, a student recalled Friday night as "me and the boys in the boat on the lake" and told how they'd grabbed a few canoes and paddled out into the dark. It was, the sorrowful prose-poem said, "intoxication by delight." "I walk now with the forest; you will not see me," it said. "Look to the waves and hear my voice. I crash upon the windy shores of Regis." Despite Tuesday's memorial, many young people had already left the campus for summer. "A lot of people have left to get away," said one of Lee's friends, who did not want his name published. "Something like this goes right through every person." The two young men had ventured with a group of friends in two canoes and a power boat Friday ferrying over to Pete's rock, a popular student gathering place roughly a half-mile across the lake from the boat launch. On state land, Pete's rock has a lean-to and a fire pit. As they returned to campus, the boats somehow overturned. Authorities said the students were not wearing life jackets. Another group of students on shore heard the cries for help. Using an axe, they broke chains on some private canoes kept locked in a boat rack and went out to help. The accident is still under investigation. kdedam@pressrepublican.com