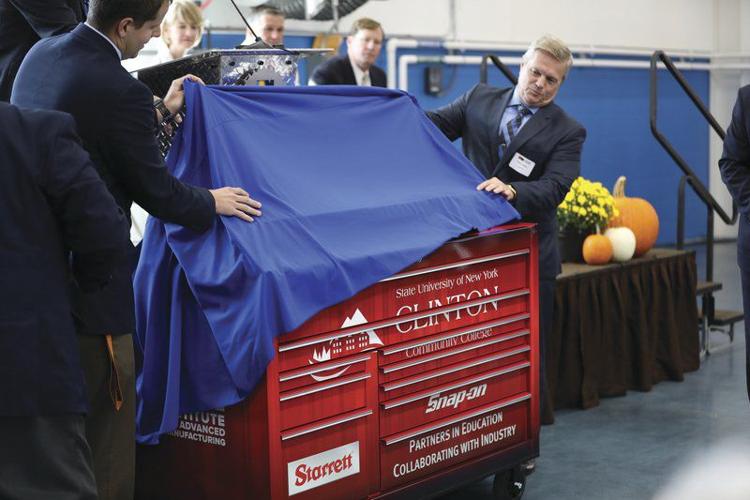 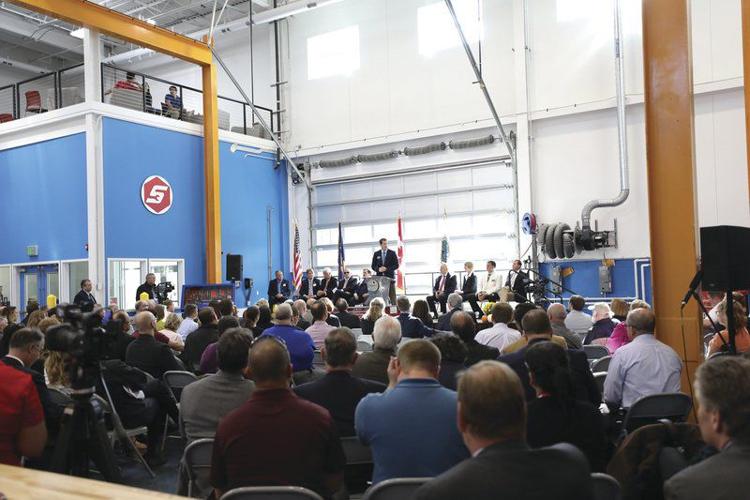 KAYLA BREEN/STAFF PHOTOA packed crowd listens as Director of Advanced Manufacturing and Technology Kristopher Renadette acknowledges all the people responsible for the completion of the Institute of Advanced Manufacturing during a ribbon cutting ceremony in the High Bay Area of the new facility at Clinton Community College. Video from this event is online at pressrepublican.com.

KAYLA BREEN/STAFF PHOTOA packed crowd listens as Director of Advanced Manufacturing and Technology Kristopher Renadette acknowledges all the people responsible for the completion of the Institute of Advanced Manufacturing during a ribbon cutting ceremony in the High Bay Area of the new facility at Clinton Community College. Video from this event is online at pressrepublican.com.

PLATTSBURGH — After years of planning and construction, local and state officials officially opened the new Institute for Advanced Manufacturing at Clinton Community College, hailing it as the future of local workforce training.

Clinton Community College President Ray DiPasquale said it was a day to be remembered in history for the college, the county and the region.

"This truly has the potential to change the face of the economy and provide the kinds of workers that we need for the future of our county," he said.

He thanked the state for its award of $12.7 million through the 2020 Challenge Grant program, which has created a new pipeline for training and workforce development to support regional manufacturing.

Clinton Community College Board of Trustees Chairman David Favro asked attendees to look around at the people gathered for the event, as they are part of the remarkable team that led to this point.

"If you look at this room right now, there is no doubt, no doubt that the best team we could assemble is right here before us," he said.

"Everybody in here contributes to the success of this institution and Clinton Community College."

SUNY Chancellor Dr. Kristina Johnson said that with her background in engineering, she was impressed by the array of equipment available at the institute.

It will provide students with the ability to develop competencies they can bring to any future role, she said.

The institute is a credit to the vision to identify aerospace, transportation and manufacturing as a cluster for the region. Johnson sees it as a destination center that will attract economic development.

"My vision for the SUNY system is to invest in outstanding pilot programs like the institute and replicate these programs across the system, across the state and be a national model, a national leader," she said.

North Country Chamber of Commerce President Garry Douglas said he was impressed by the positive vibe from everyone who attended the event.

The institute was a key piece that helped convince Norsk Titanium to locate in Plattsburgh, as it would help address workforce concerns.

Norsk, as creator of proprietary technology, will transform Plattsburgh into a global center for additive manufacturing, he said.

"Thanks to our new friends at Norsk ... this is going to be a place that produces new generations of that technology. That's what this facility helps support," he said.

"This new institution will serve as a platform for training and partnerships and will be a major contributor to this region's growing transportation and aerospace cluster," he said. "It continues to affirm Gov. Cuomo's commitment to creating high-quality, good-paying jobs right here in Upstate New York."

The Development Corp. President Paul Grasso said he believes the institute will be as, if not more, important to economic development as the region's highways, broadband, water and sewer systems.

"This is going to become an absolutely critical part of that economic development infrastructure," he said.

State Assemblyman Billy Jones (D-Chateaugay) said it was refreshing to feel the excitement in the air as he entered the facility.

He sees the institute as a beacon to attract the next generation of innovative and entrepreneurial achievers.

"What an opportunity it is for students to have this right in their backyard," he said.

That opportunity is there for manufacturers, as well, Jones said. Now they need to send their employees to take advantage of it.

Clinton County Legislature Chairman Harry McManus said he was proud to see this new addition to the county's workforce development picture. It will help the region face the challenges that all regions are facing, he said.

"One of the best solutions to those challenges are citizens who have the skills in the 21st century for good-paying jobs for their families and economic well-being. That's what the IAM building is all about," he said.

Plattsburgh Town Supervisor Michael Cashman said it is a big step as the region moves down the path of investing in the future.

He urged the audience to be ambassadors for the college and institute but also for downtown revitalization in city and at the airport.

"Plattsburgh is on the move, and in ways we have never seen before," he said.

Snap-On Tools has provided a plethora of equipment and training for the institute.

Snap-On Industrial National Education Partnerships Manager Earl Bailey said that, in his role, he visits 100 to 125 secondary and post-secondary schools across the country every year.

Speaking on behalf of Snap-On and for the National Coalition of Certification Centers, he said the Institute for Advanced Manufacturing at Clinton Community College is what they call a center of excellence.

"This is a benchmark facility, not just for the north states, (but) I'm going to say for the nation as a whole," he said.

Institute for Advanced Manufacturing Director Kristopher Renadette thanked the team that created a training facility to meet the present and future need of manufacturers.

It will allow students and employees to immerse themselves in an environment that matches their present or future workplace.

"The IAM is much more than a building. It is a foundation," he said. "The IAM will be a foundation for this community well into the future."

DiPasquale then wrapped things up.

"We promise to all of you that this will be a first-class facility providing outstanding training to our business and industry and, most importantly, preparing our students for the future."