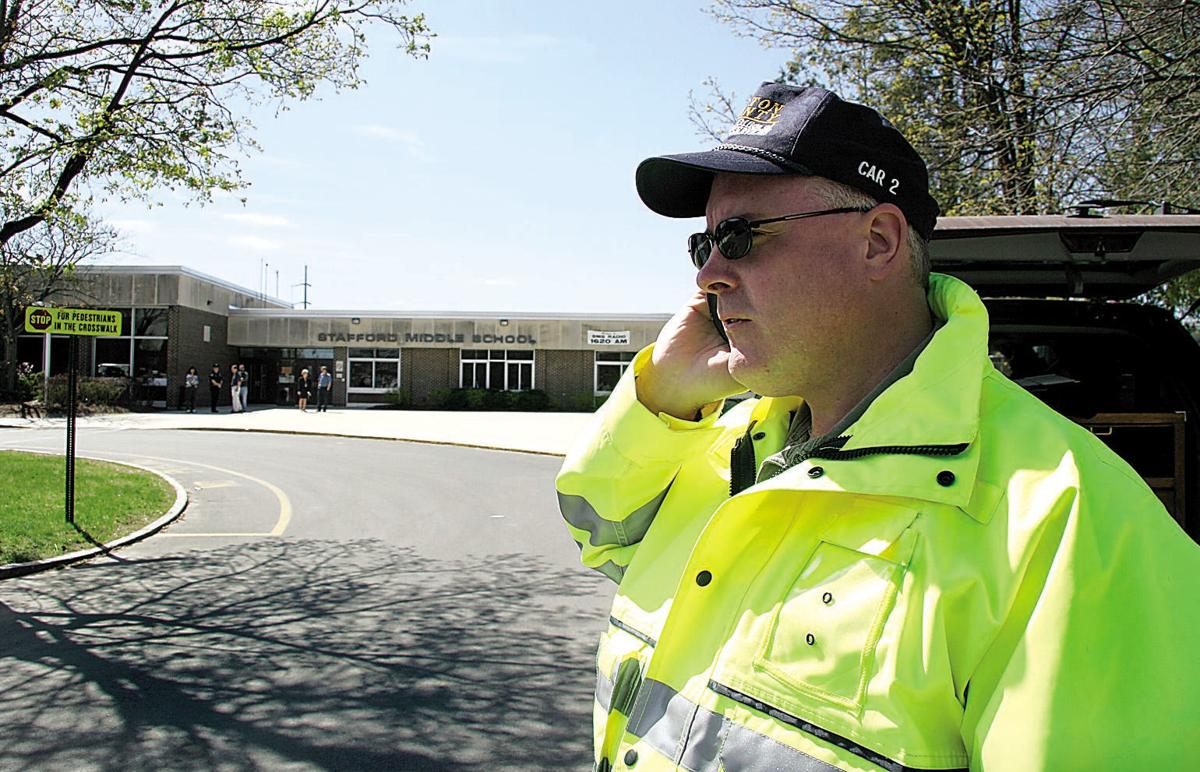 Clinton County Emergency Services Assistant Director Kelly Donoghue coordinates with his staff via a hand-held radio during the evacuation of Stafford Middle School. The Plattsburgh school was evacuated Monday when a noxious odor from a nearby environmental cleanup site caused several students and staff members to become ill 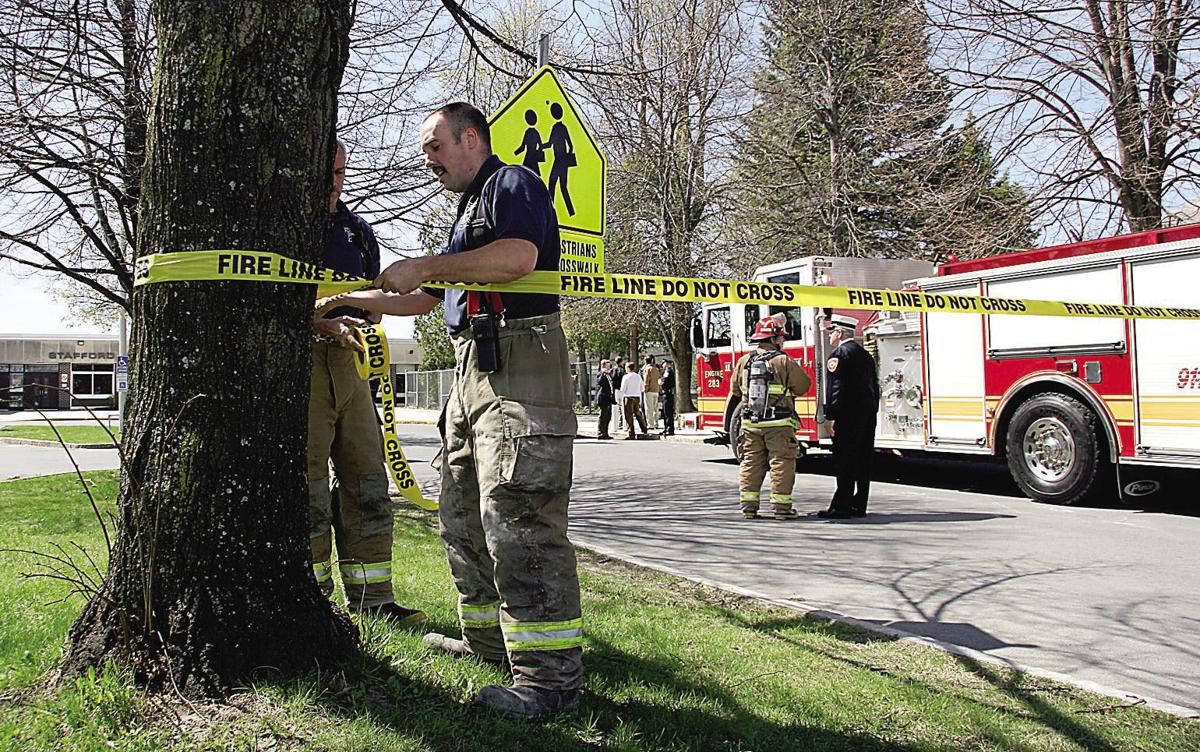 City of Plattsburgh firefighters tape off the entrance to Stafford Middle School during the evacuation of the school because of odor from a nearby environmental cleanup site.

Clinton County Emergency Services Assistant Director Kelly Donoghue coordinates with his staff via a hand-held radio during the evacuation of Stafford Middle School. The Plattsburgh school was evacuated Monday when a noxious odor from a nearby environmental cleanup site caused several students and staff members to become ill

City of Plattsburgh firefighters tape off the entrance to Stafford Middle School during the evacuation of the school because of odor from a nearby environmental cleanup site.

PLATTSBURGH -- Officials evacuated Stafford Middle School Monday after an odor from a nearby environmental cleanup site caused at least half a dozen students and some staff members to get sick. No one was transported to the hospital, and after testing assured health officials the air was safe, staff members were allowed back in the building. Classes will resume today. Work at a site across the Saranac River from the school has been halted for at least a week, though, and officials in charge of the cleanup project will discuss how to lessen the odor. "This is the second times fumes came into the building and disturbed the instructional process," said Stafford Middle School Principal Patricia Amo. "So we sent everyone home to be sure everything is safe for our Plattsburgh community. "All our children were out within a 35-minute period." POLLUTED SITE The smell stems from the cleanup of contaminated soil, being overseen by New York State Electric & Gas, at the site of a former manufactured-gas plant on Saranac Street. The site has elevated levels of coal tar, a by-product of gas produced at the site while it was in operation during the first half of the 20th century. The soil remediation is expected to be completed by 2008. Since the work there started, residents around the site have also complained about the noise and the odor, some saying it is making them sick. On Monday morning, Middle School employees detected the odor at around 9 a.m., with at least seven children and some staff members reporting feeling nauseous. School officials immediately decided to close school and send students home. Plattsburgh Fire and Police departments responded to the school, not allowing anyone to re-enter the building until the air quality was determined. Police assisted with the evacuation, controlling traffic flow and ensuring students were able to safely leave the building for home. Once everyone had left school grounds, police secured the location with yellow caution tape. AIR TESTS The Clinton County Health Department was called in to conduct air tests Monday and determined that the air was safe. "There were no concentrations at the facility at all," said Dan Collins, coordinator of Clinton County Health Department's Haz-Mat team. "At the job site, we collected small quantities on the meters, but they were well below anything that would harm citizens." "Construction at the site has been shut down for the rest of the week," said Plattsburgh City Police Captain Michael Branch. Work had previously stopped at the site a few weeks ago after some students and staff at Stafford Middle School reported dizziness, nausea and itchy and burning throats and eyes. Site officials halted work voluntarily, said Lech Dolata, project manager for the Department of Environmental Conservation. "At no times were action levels exceeded," he said. "It was shut down to alleviate discomfort for the community." URGES STOPPAGE School officials want work to cease until something can be done to prevent students and staff from getting sick. "We want to address and know what it is and what kind of hazard we have for the kids," said Plattsburgh City School Superintendent James "Jake" Short. "We have been annoyed by this and want to know what the residents are exposed to. "We want it cleaned up, but when this material is exposed to the air for the first time in many years, some of it vaporizes and there is a smell, and we have to stand up and say we are not going to be exposed to this anymore." School officials hope a meeting Wednesday night to inform the public of the project and odor answers questions many people have. "The people Wednesday night have to answer about possible dangers," Short said, "because more kids are getting sick than we have ever seen before." sbartlett@pressrepublican.com

92, of Morrisonville died September 22,2020 at UVM-CVPH. Visitation will be Thursday, October 1,2020 from 9:00-10:30a.m. Brown Funeral Home, Cadyville. Funeral mass to follow at 11:00a.m. Church of the Assumption, Redford. Online condolences may be offered at www.brownfuneralhomeinc.com.