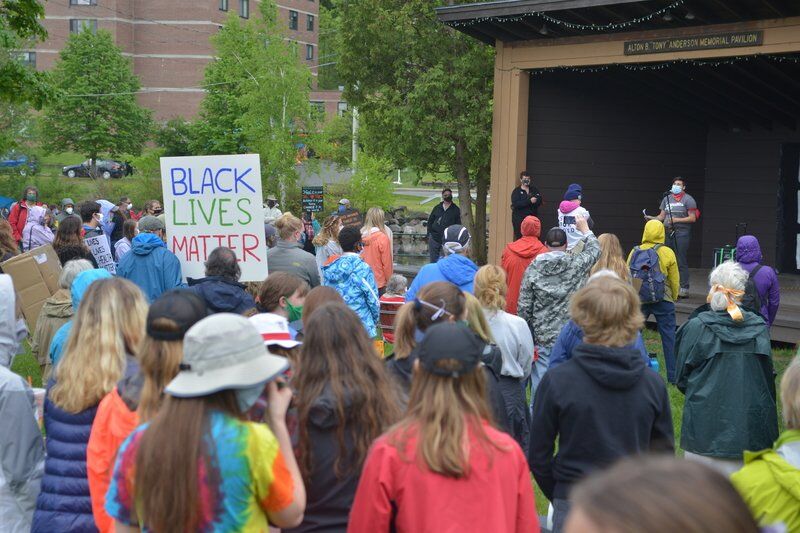 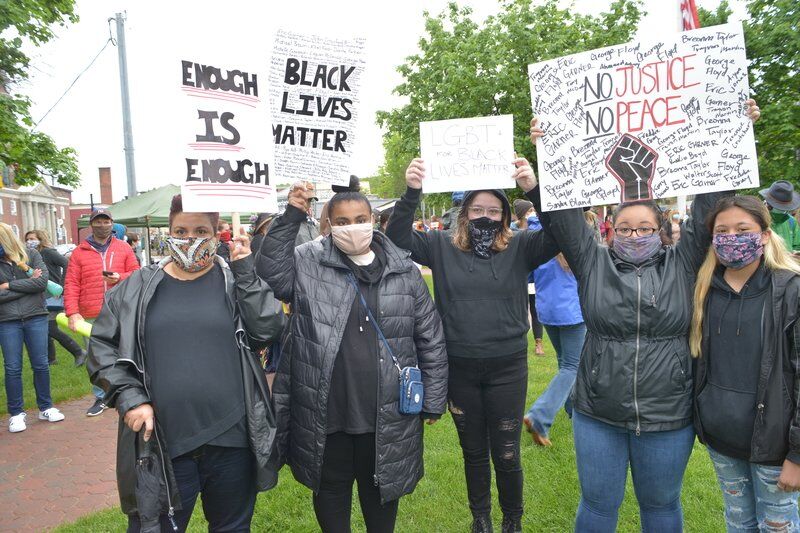 JACK LADUKE/P-R PHOTOSA group of women hold up protest signs at a rally in riverside Park in Saranac Lake Tuesday. The protest was organized by the High Peaks chapter of the Democratic Socialists of America. At peak of the rally, approx 400 to 500 people were seen at the event, according to a report from the Adirondack Daily Enterprise newspaper. 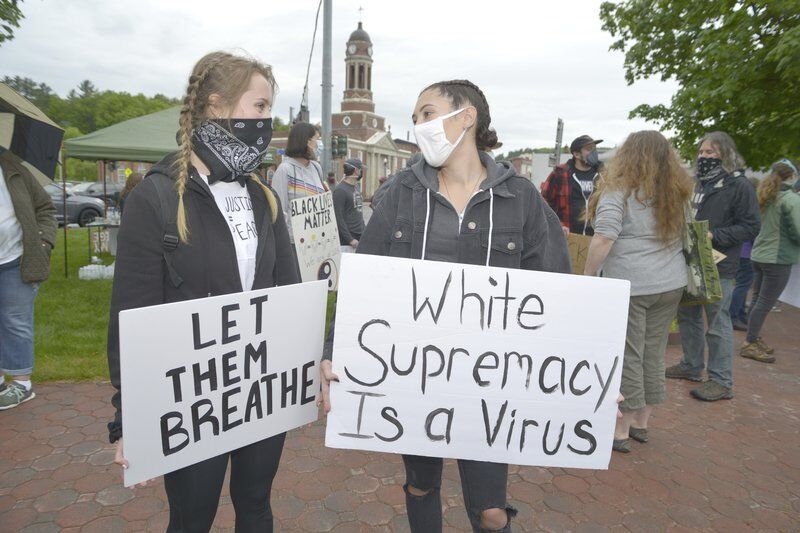 JACK LADUKE/P-R PHOTOJulia Mull (left) and Emma Beach traveled from Plattsburgh Tuesday to take part in a rally over police brutality on Tuesday in Saranac Lake.

JACK LADUKE/P-R PHOTOSA group of women hold up protest signs at a rally in riverside Park in Saranac Lake Tuesday. The protest was organized by the High Peaks chapter of the Democratic Socialists of America. At peak of the rally, approx 400 to 500 people were seen at the event, according to a report from the Adirondack Daily Enterprise newspaper.

JACK LADUKE/P-R PHOTOJulia Mull (left) and Emma Beach traveled from Plattsburgh Tuesday to take part in a rally over police brutality on Tuesday in Saranac Lake.

WASHINGTON (AP) — Undeterred by curfews, protesters streamed back into the nation’s streets Tuesday, hours after President Donald Trump pressed governors to put down the violence set off by George Floyd’s death and demanded that New York call up the National Guard to stop the “lowlifes and losers.”

As more demonstrations began taking shape around the country, and cities including Washington prepared for the possibility of more violence, the president amplified his hard-line calls of a day earlier, in which he threatened to send in the military to restore order if governors didn’t do it.

“NYC, CALL UP THE NATIONAL GUARD,” he tweeted. “The lowlifes and losers are ripping you apart. Act fast!”

One day after a crackdown on peaceful protesters near the White House, thousands of demonstrators massed a block away from the

presidential mansion, facing law enforcement personnel standing behind a black chain-link fence. The fence was put up overnight to block access to Lafayette Park, just across the street from the White House.

“Last night pushed me way over the edge,” said Jessica DeMaio, 40, of Washington, who attended a Floyd protest Tuesday for the first time. “Being here is better than being at home feeling helpless.”

The crowd remained in place after the city’s 7 p.m. curfew passed, defying warnings that the response from law enforcement could be even more forceful. But the protest lacked the tension of the previous nights’ demonstrations. The crowd Tuesday was peaceful, polite even. At one point, the crowd booed when a protester climbed a light post and took down a street sign. A chant went up: “Peaceful protest!”

‘THIS HAS TO CHANGE’

On Monday, law enforcement officers on foot and horseback aggressively drove protesters away from Lafayette Park, clearing the way for President Donald Trump to do a photo op at nearby St. John’s Church. On Tuesday, pastors at the church prayed with demonstrators and handed out water bottles.

Protests ranged across the U.S., including in New York City, Los Angeles, Miami, Houston, St. Paul, Minnesota, Columbia, South Carolina, and Orlando, Florida, where more than 1,000 people gathered in the afternoon to decry the killings of black people.

“This has to change,” said 39-year-old Aisxia Batiste, an out-of-work massage therapist in Orlando. “Something has to give. We’re done. This is the beginning of the end of something. It has to be.”

In New York, midtown Manhattan was pocked with battered storefronts after Monday’s protests. Macy’s flagship store was among those hit when crowds of people smashed windows and looted stores as they swept through the area. A police sergeant was hospitalized after being hit by a car in the Bronx, where people walked Tuesday between ransacked buildings and a burned-out car on the Grand Concourse, a commercial thoroughfare.

“We’re going to have a tough few days,” he warned, but added: “We’re going to beat it back.” He pleaded with community leaders to step forward and “create peace.”

Thousands of protesters marched Tuesday night in a string of demonstrations across Manhattan and Brooklyn after merchants boarded up their businesses, fearing a repeat of the night before. Many people remained on the streets after the curfew hour. Police eventually ordered them to move along and began taking some into custody.

More than 20,000 National Guard members have been called up in 29 states to deal with the violence. New York is not among them, and de Blasio has said he does not want the Guard. On Tuesday, Democratic Gov. Andrew Cuomo called what happened in the city “a disgrace.”

“The NYPD and the mayor did not do their job last night,” Cuomo said at a briefing in Albany.

He said the mayor underestimated the problem, and the nation’s largest police force was not deployed in sufficient numbers, though the city had said it doubled the usual police presence.

Tuesday marked the eighth straight night of the protests, which began in Minneapolis, where Floyd died, and quickly spread across the country.

The mother of George Floyd’s 6-year-old daughter, Gianna, said she wanted the world to know that her little girl lost a good father.

“I want everybody to know that this is what those officers took,” Roxie Washington said during a Minneapolis news conference with her young daughter at her side. “I want justice for him because he was good. No matter what anybody thinks, he was good.”

On Monday, scattered violence flared in multiple protests, including an officer who was shot and gravely wounded outside a Las Vegas hotel and casino, and four officers shot in St. Louis. They were expected to recover.

About a dozen other deaths have been reported around the country over the past week. And nearly 8,000 people nationwide have been arrested, according to a count by The Associated Press.

Some protesters framed the burgeoning movement as a necessity after a string of killings by police.

“It feels like it’s just been an endless cascade of hashtags of black people dying, and it feels like nothing’s really being done by our political leaders to actually enact real change,” said Christine Ohenzuwa, 19, who attended a peaceful protest at the Minnesota state Capitol in St. Paul. “There’s always going to be a breaking point. I think right now, we’re seeing the breaking point around the country.”

“I live in this state. It’s really painful to see what’s going on, but it’s also really important to understand that it’s connected to a system of racial violence,” she said.

Meanwhile, governors and mayors, Republicans and Democrats alike, rejected Trump’s threat to send in the military, with some saying troops would be unnecessary and others questioning whether the government has such authority and warning that such a step would be dangerous.

“Denver is not Little Rock in 1957, and Donald Trump is not President Eisenhower. This is a time for healing, for bringing people together, and the best way to protect civil rights is to move away from escalating violence,” Colorado Gov. Jared Polis and Denver Mayor Michael Hancock, both Democrats, said in a statement, referring to Eisenhower’s use of troops to enforce school desegregation in the South.

A senior White House official, speaking on condition of anonymity, said that the president is not rushing to send in the military and that his goal was to pressure governors to deploy more National Guard members.

Such use of the military would mark a stunning federal intervention rarely seen in modern American history.

Amid the protests, nine states and the District of Columbia held presidential primaries that moved Joe Biden closer to formally clinching the Democratic presidential nomination. Voters waited in long lines hours after polls closed, brushing up against curfews in Washington and Philadelphia, two cities rocked by protests.

Also Tuesday, Minnesota opened an investigation into whether the Minneapolis Police Department has a pattern of discrimination against minorities. Floyd died May 25 after a white Minneapolis officer, Derek Chauvin, pressed his knee on the handcuffed black man’s neck for several minutes.

Chauvin has been charged with murder. Minnesota Attorney General Keith Ellison said prosecutors are working as fast as they can to determine if the three other officers at the scene should be charged too. All four have been fired.

86, of Military Turnpike, Plattsburgh, passed away on April 19, 2021. He was born in Waddington, N.Y., on March 10, 1935. At Richard's request, services will be private. Arrangements entrusted to Brown Funeral Home.

Josephine (O'Kusky) Yelle, 89, of Witherbee, NY died April 19, 2021 at her home. A Mass of Christian Burial will be held April 23, 9:00 am, at St. Patrick's Church in Port Henry. Arrangements with Harland Funeral Home.

Russell A. LaPine, age 89, of Plattsburgh, died April 9, 2021, at the CVPH Medical Center due to natural causes. There will be no formal calling hours or funeral service. A graveside service will be held at a later date. Funeral arrangements are entrusted to Heald Funeral Home in Plattsburgh, N.Y.